The Best Christmas Gift (DAR and Genealogy related, of course) 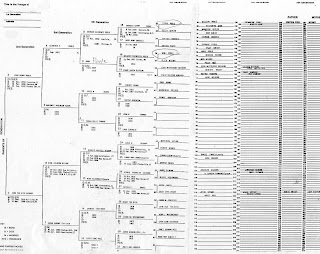 It was in December, I had only been working at the DAR for about a month, but when she walked in, I was soon in shock. I was presented a large white box about 20" x 14" and tied up in a big red bow. What could it possibly be? It was as light as a feather, and when I shook it, there was a rustling noise inside. With my few quizzical looks at her big smile, I realized it was indeed for me. A quick pull on the ribbon and pushing apart the tissue paper revealed a mass of papers. Some not the least familiar to me. She had done generations of research on my family! A few weeks earlier, I had provided her with a six-generation ancestry chart, done by who knows who in my family, which showed most names and years, but there were also lots of blanks. It was all she needed.

My very new friend had spent a lot of time doing my census look-ups, not on Ancestry.com mind you, not a computer, but by the old fashioned method. She made some actual copies of the censuses and a timeline of censuses for a good many ancestors. Some I never heard of! I can't remember how many sheets she did, but I am showing an example below. I am so glad I saved a few of her original work. I hadn't even gotten to that point yet in my research, so she had to explain the timelines. Where we worked, all the censuses for New England were housed in one room, so she didn't have to leave the building. Except for 1920 for Evanston, Illinois, which showed my father at age 1, that she made a special trip to the NARA in Washington, DC. I was indeed blessed to have this genealogist friend do this for me.

In addition, there was a 27 1/2" x 24" ancestry chart, for nine generations filled in with all the information she found; names, dates, and locations! There were no genealogy software programs back then. Looking back, I marvel at her dedication, and all the time it took to do this. Almost immediately, I made copies of each section of the huge chart, constantly reducing the size, and then taped it together. Eventually, I got the chart to an 8 1/2 x 10 size, which I carried with me for years, as my point of reference, the copy is above.

For many years, I kept the box, but three years ago, it just fell apart. However, I have her original chart, my small reduced one, and several copies of her timeline of census records.

It is indeed the best gift ever, something totally from the heart, and didn't cost much, except for her hours, and hours and hours of time. Thank you, Ann.

In the past 20 years, I have run into her at a national genealogy conference and at least three times at the NEHGS library in Boston. I am sure she has never forgotten that gift to me either. 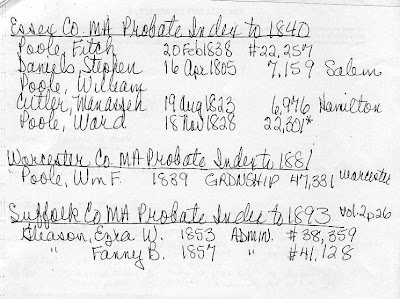