For Bill West's Second Great American Local Poem Genealogy Challenge I have decided to enter a poem I recently received from my distant cousin, Claire. She in turn, received it from somebody trying to solve her own Adams "Brick Wall." Upon reading it, I realized it was a a story of a person's life, more like an obituary.  The only thing missing are the names of his parents, and the year of birth and death. Everything else is in, including his wife's name, years married and her father's name. I hope you enjoy it. Thanks Bill and I'm glad I'm participating in your challenge.

At his son's house near the village,
JASON ADAMS, ninety-three,
On the twenty-eighth of February
Pass'd into eternity.
In Connecticut our subject,
On the ninteenth of July,
In the county of New London,
Like us all, was born to to die.

He was vigorous and rugged,
And of Anglo-Saxon stock--
From the May-flow'r his grandfather
Landed safe at Plymouth Rock.
Zachary Mann, his wife's father,
Fought on fields where blood did run,
In the awful revolution,
Under Gen'ral Washington.

He was present when the British
Put the torch to Buffalo ;
And for us he used the musket
In our fight with Mexico.
And was proud when Montezuma
To defeat was found a prey,
And in triumph told the story,
E'en upon his dying day.

He removed to Massachusetts
When a lad of seventeen.
Where he Betsey Mann did marry
With the virtue of a dean ;
With his wife he went to Bergen
In the county Genesee,
And removed from there to Sheldon
At the age of twenty-three.

'Mong the wolves, wildcats and panthers,
Came our subject with his wife,
To the hardships was accustom'd
Incident to frontier life.
He was sire of youths and maidens--
Some are numbered with the dead,
And the years were sixty-seven
Which were spent with her he wed.

He in life enjoyed religion,
Died as Christians always die,
And his soul released from bondage,
To the breast of God did fly.
And his children and their children
And their children's children, too,
Will with him unite, if faithful,
Heaven's King in glory view. 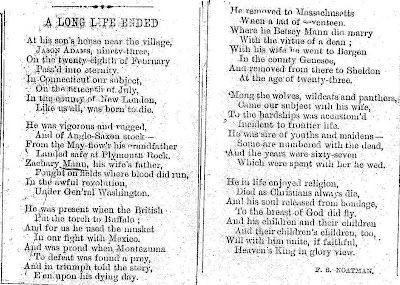 As a genealogist, I just had to find out about Jason Adams, but it wasn't easy. One person had him and Betsey Mann in their tree, but no other information, and no sources. I discovered a Jason Adams mentioned in several newspapers, one dated March 12, 1887, stated, "Jason Adams, of Java, N. Y. aged 93, is dead." and a paper from Castile, N. Y. has "He was the oldest son of the late Jason Adams, who died in this village February 1887, aged 93." The person who located the poem said it was from a Warsaw, New York newspaper. So based on these facts, I believe it is the same person. All three towns are in Wyoming County, New York.

With the above information and his calculated birth year of 1794, I was able to locate him, his wife Betsey and children in the 1850, 1860, 1870 and 1880 census. In 1880 Jason was 86 years old and died seven years later at age 93. It is nice to know I found my man.
Labels: Location: Connecticut, Location: Massachusetts, Location: New York, Obituary, Poem, Surname: Adams
Email ThisBlogThis!Share to TwitterShare to FacebookShare to Pinterest