"The Ultimate Volunteer" -- My Mother's Newspaper Obit. 31 years ago, She Died This Day 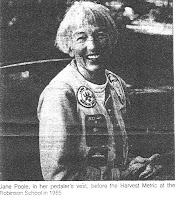 Acton --
Jane Poole was not the type of person to sit home and knit sweaters after she retired. She was always moving -- athletic, giving, involved in her community. It was not unusual to spot Poole out on her bike, tooling around town doing errands, going to aerobics classes, organizing social events.

She died April 16 of a heart attack, at the age of 70, doing what she loved, leading a group of bicyclists on an annual Patriot's Day bike ride in Lincoln [sic] (should be Lexington).

Poole, a retired Westford kindergarten teacher, was an active member of the Nashoba Valley Pedalers, a group of bicyclists who go on monthly trips all over the state. She also contributed her boundless energies to the American Association for Retired People, the Concord Piecemakers (a quilting group) and the First Parish Unitarian Church in Chelmsford, among other organizations.

A mother of three, Poole will be missed by the many diverse groups who knew her. 'She was the ultimate volunteer,' said Jean James, a fellow pedaler and friend of Poole's for over 10 years. 'She wasn't willing to become inactive. She definitely wanted to stay active for as long as she could.' Poole did nothing halfway, putting 100 percent of herself into any project. When she decided to start biking during the gas crisis of 1973, she didn't stop at a few miles a day. She averaged 350 miles a month at one point in her bicycling career, logging several 100-mile day trips with her fellow bikers.

She even went overseas, making several European biking trips including one 2 years ago to the Soviet Union.

While Jane Poole was always an outdoor person, her daughters said they don't remember her as an avid athlete while they were growing up They do remember the tireless giving of her time to such things as girl scouts, the church, and making crafts for charity fairs.

She taught kindergarten at the Robinson School in Westford for 15 years, and later was a substitute teacher for the Acton school systems in her semi-retirement. 'She was a friendly, giving person. She was the type of person that if her students didn't have bags to carry their books in, she would have them make book bags.'

Poole grew up in New York City and went to Skidmore College for a degree in textiles. She received her master's in education from Northeastern.

She also devoted time to her alma mater, helping Skidmore alumni club organize a reunion of the class of 1942. 'She was always a great planner, always looking ahead.'

Poole worked hard in her life to turn the railroad tracks which start in Lowell and go through Chelmsford, Westford, Carlisle, Acton, Concord, and Sudbury, into a bike path. Her daughters said they will be working with a lawyer to ensure any donations made in Poole's memory will go to the Lowell-Sudbury bike path." 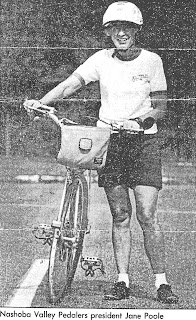 Note: She was planning a bike trip in France just 6 weeks before her death. She also biked in China, the Netherlands, Scandinavia, England and many states in the United States.

The above-mentioned Bruce Freeman bike trail opened almost two years ago. More than 19 years after death! Had she still been alive, she probably would have ridden on it at age 90.
Personally, I know she was a Girl Scout leader and for several years the Sunday School volunteer administrator.
Her revised will dated 1 March 1990, was just 6 weeks prior to her death and a few months before a scheduled trip to France, replaced her original one prepared in ca. 1955. She thought so much about her love of the Church, Rails to Trails, New England Quilt Museum, Friends of the Acton Council on Aging, Northfield Mt. Hermon School (where she attended a private high school), and Skidmore College that she left each of them 1/6 of 1/4 of her estate. She volunteered for all of them, and probably right to the end. (Note: she wasn't into genealogy, but sent me her DAR membership certificate, my great-grandmother's, and gg grandmothers' certificates. She was thrilled that I was working in the DAR.) From below I highlighted, "In her retirement, she often rode over 5000 miles a year."

I wrote about her in my Fearless Females Blog  --  Tragic or Unexpected Deaths last year in March.
I just found this online on April 14, 2021 (written 29 years after her death).