One lovely June day, I was in search to find the gravestone of my 10th Great-grandfather, Robert Adams. FindAGrave indicated he was buried in the First Settlers Burial Ground in Newbury, MA.

With directions, we soon spotted the above sign on the side of a street.
Cautiously we walked along the grass path to the opening and although it was about 9:30 am on a Sunday morning, somebody was cutting the grass! 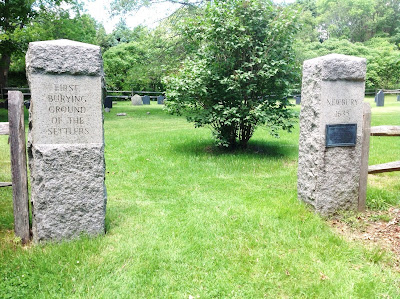 We noticed almost all the cemetery stones were reproductions, very few originals. The grass cutter, who happened to be a trustee, seemed to know where everybody was buried, and pointed out my Robert Adams' stone, also an ancestor of his wife's. He mentioned another old cemetery, which was too hard to find with verbal directions, so he offered to drive there, so we (I) jumped at the chance to follow in our car for five miles. Below is a reproduction stone of my ancestor.
In
Memory
of
Robert Adams
Who Died
October 12, 1652
Aged 80 Years
He knew the roads, and drove mighty fast. Below is the entrance to the Byfield Cemetery. He lead us up the long hill, to the open space and found the much older stone, a memorial to the Adams family. I brought home a souvenir of 13 mosquito bites.
Our guide was a remarkable man, a non-stop talker who filled us in on a lot of information. As nice it was having the kid-glove treatment, a bonus was seeing the most beautiful scenery. A few days later, I received a print-out about the First Settlers Burial Ground.

Mr. Robert Adams,
who came from ,