Brook Farm in Roxbury, Massachusetts and How it Relates to Me

When I discovered back in January that my 2nd great-grandfather surveyed a property in West Roxbury, Massachusetts for the city, I immediately became interested in learning more. Thanks to the Massachusetts Historical Society (MHS) in Boston for giving me additional information and confirmation that he indeed did a map of Brook Farm in Roxbury, June 1849, and it is in their collection.

Fast forward to nine months, I just went to Brook Farm, now a Historic site, you'll see the photos below. The Farm consists of 179 acres of "rolling fields, woodlands and wetlands" and one lonely building. I love knowing that my ancestor, Charles H. Poole surveyed this land in the late 1840s as well as the town of Roxbury and Long Island, in Boston Harbor.

I'll quote what is written about the Farm in the brochure prepared by the Dept. of Conservation and Recreation for Massachusetts. "Founded in (October 11) 1841 at the height of the Transcendental movement, an experimental society of men, women and children had dreams of leading a more wholesome and simple life. The Farm's members and visitors included renowned authors and philosophers Nathaniel Hawthorne, Charles Dana, Ralph Waldo Emerson and Margaret Fuller."

"Utilized in later years for a poorhouse, Civil War training camp and orphanage, the site reflects a theme of social consciousness and reform." Visitors are free to roam around the Farm, and even picnic there. Since I had been waiting nine months to visit, I was terribly excited to be there, even though, it's less than an hour from home."

The Community disbanded six years after its inception. A loss of their residential building due to fire, and other reasons were partly to blame. In 1861 the Second Massachusetts Infantry Regiment used the land for military training. In 1872 Martin Luther Orphan's Home was opened, and remained there until 1943. Later, in 1948, the Brook Farm Home, a treatment center and school opened, closed in 1974.

The history doesn't stop here. The land has a much older past. In February, I read in the Boston Globe an article about the Farm and the "display of artifacts found during excavations in the 1990s at the historic Brook Farm site." On display at the lab are over 100 artifacts from Brook Farm highlighting the diverse uses of the property, including a 5,000 year old Native American spear point, colonial artifacts, painstakingly reconstructed ceramic serving dishes used by the Brook Farmers, the only physical remains of the massive Phalanstery building, as well as architectural elements and personal items from the Utopian community. The later use of the property is represented by Civil War-era items from Camp Andrew, and toys from an orphanage run out of the Hive building - the heart of Utopian-period community." I spoke with the City Archaeologist, and asked him some questions. Unfortunately some of the exhibit is being removed this weekend, so I won't get to see it.

"Brook Farm was one of the first sites in Massachusetts to be listed on the National Register of Historic Places and designated a National Historic Site." There is quite about this Farm from Wikipedia. 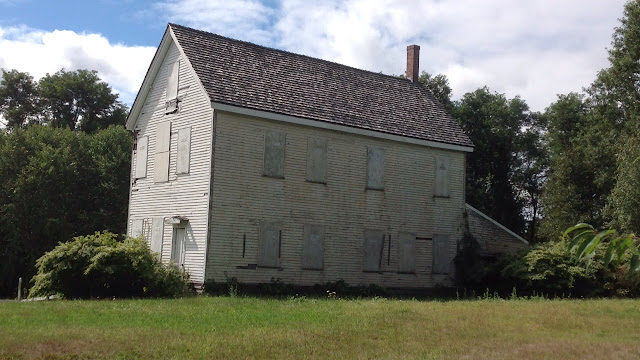 The Print Shop was built in the 1870s for the Orphanage. Other buildings have burned.
Images from West Roxbury Historical Society and Google may be seen HERE. 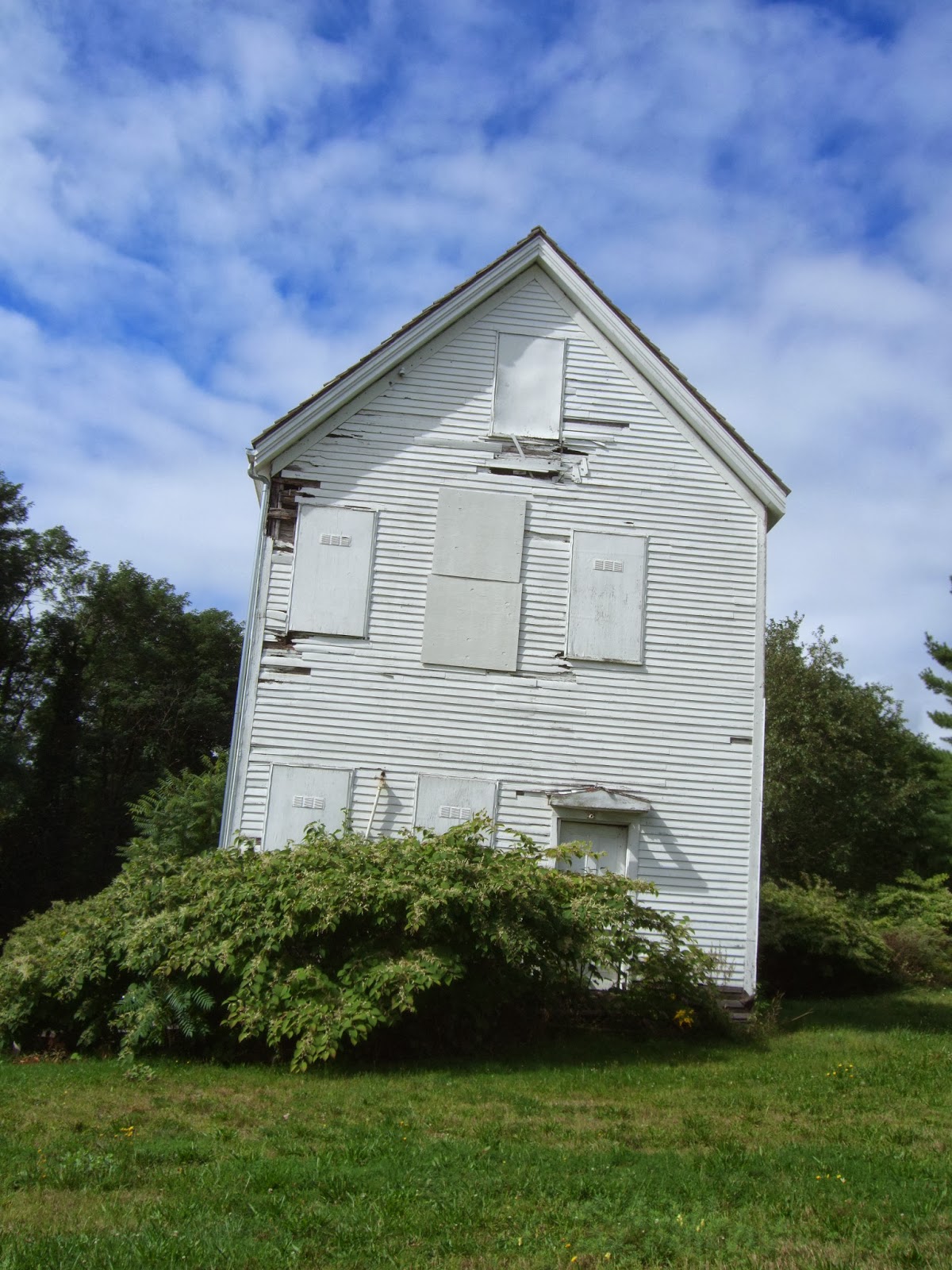 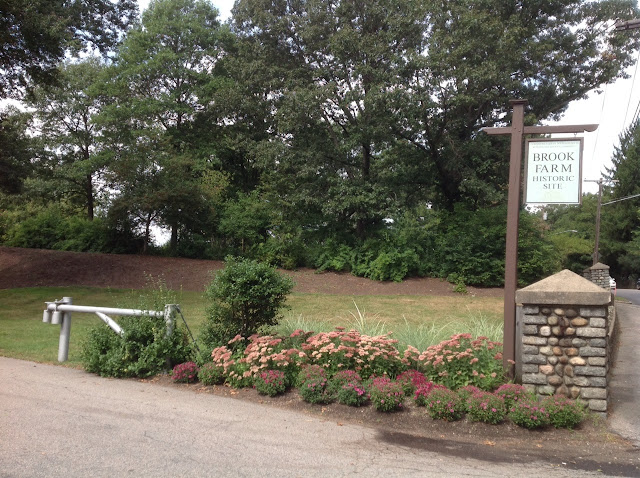 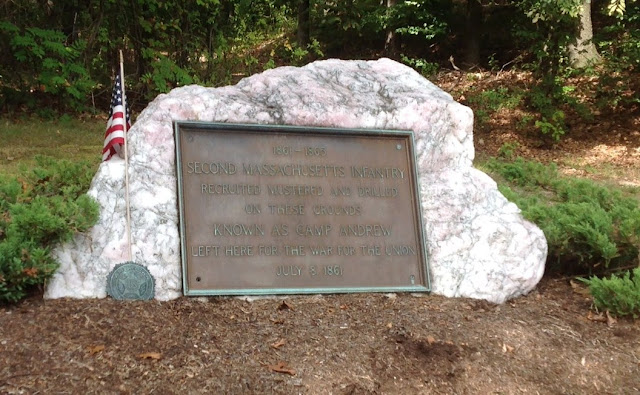 1861 -1865
Second Massachusetts Infantry
Recruited Mustered and Drilled
on These Grounds
Known as Camp Andrew
Left Here for the War for the Union
July 8, 1861 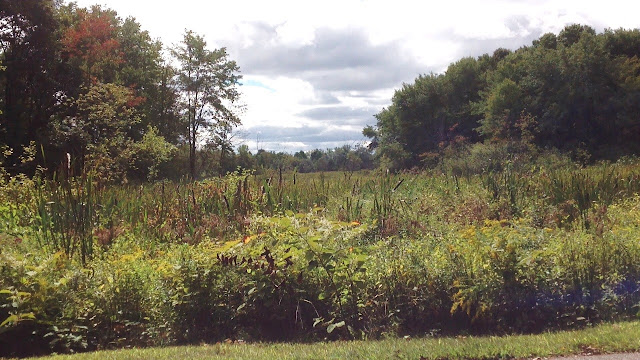 Some of the wetlands. 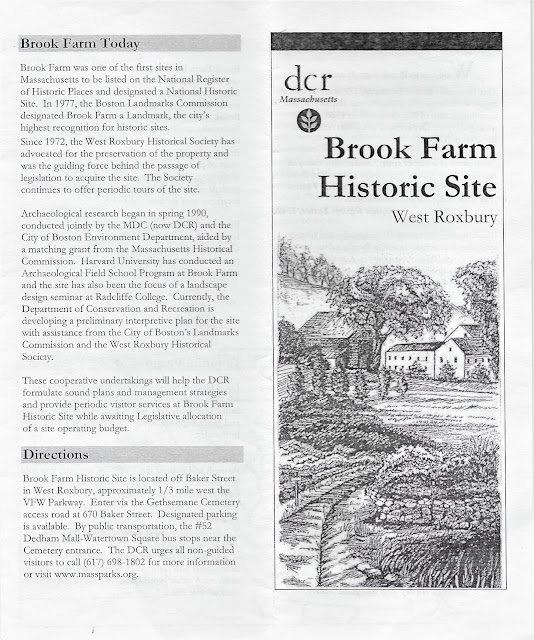 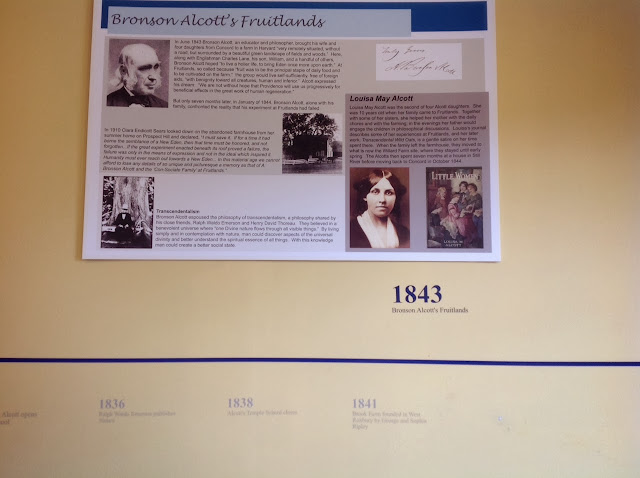 While looking at an exhibit at the Fruitlands Museum, in Harvard, Massachusetts, with a blogger friend, I noticed the mention of 1841 when Brook Farm was founded (above and below). 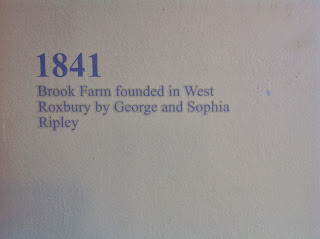 Massachusetts Historical Society
From correspondence I had with the Society in January 2013.

"I found the following item which is directly attributed to Charles H. Poole:

From a facebook page I received, is the following interesting article.

September 20 at 9:43am ·
One of the collections management features we added this year is a new system to convert our digital catalog data automatically into formatted archival tags. These tags not only will live with the artifacts themselves in their archival bags, but also serve as labels and scales in the photos we are now taking of every artifact we process. This year we have already taken over 20,000 artifact photos, and are actively uploading them into a searchable artifact database, which we will launch soon. #collectionsmanagement #archaeology #digbos