His Little Green Book Was So Organized, Why Can't I Be? 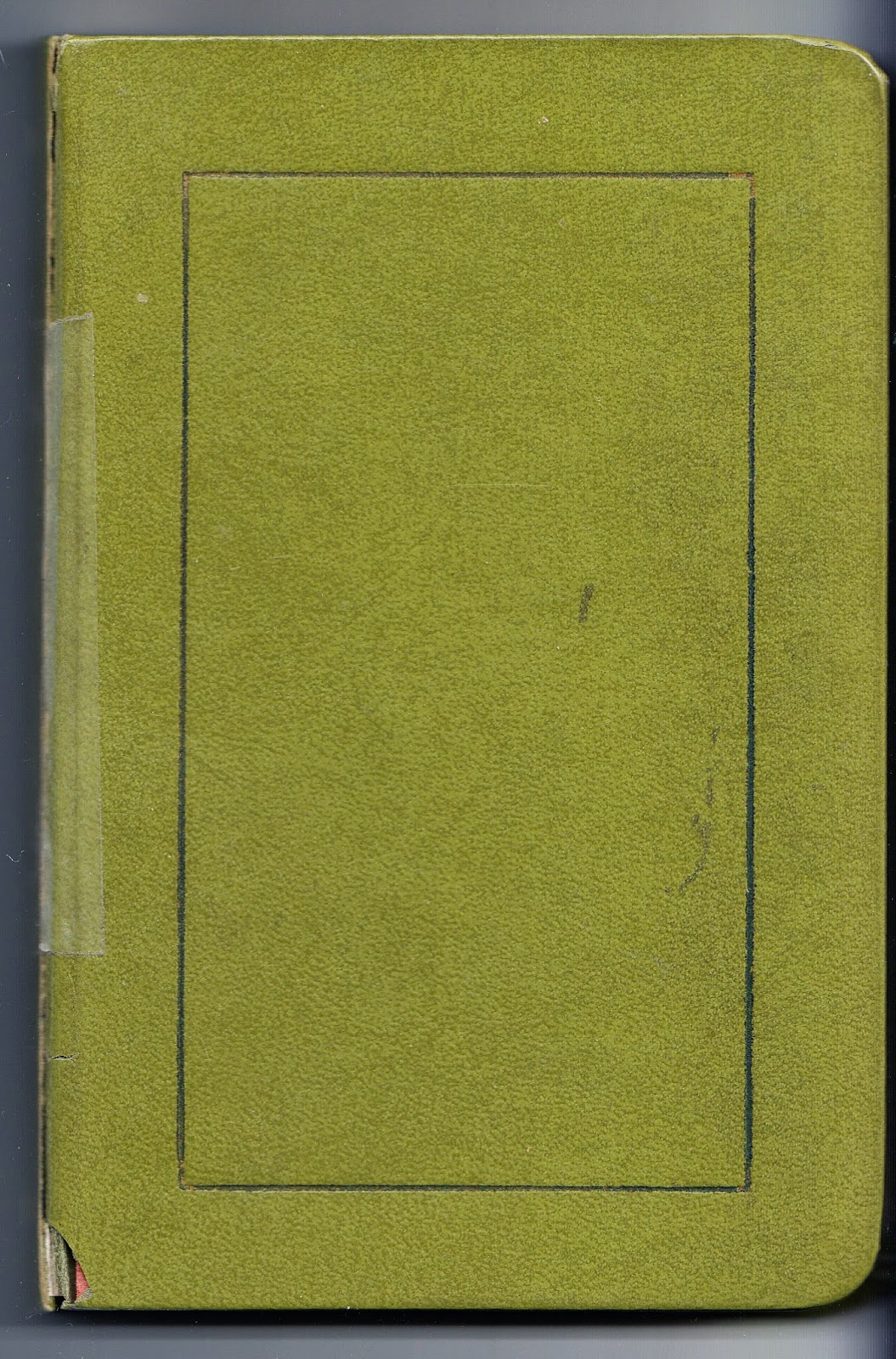 Since 1981 this little green book has been looked at many times, because it contained a wealth of information about my Grandfather's many trips. At the time of his death, this was one of several things I decided to keep. It was in good condition, but I looked at it so many times that page holes have torn and the binding had to be taped.

When my grandfather married in 1953 to his secretary three months after his wife passed away, I believe they decided to make their time together (he was 61, she 52) travelling around the world. There is no date on this book, but the fact that they went to Cuba is an indication it was before 1962, and Cuba is #1 in the index and first page, shown below. I believe their honeymoon was in Cuba and Mexico.

Many years later, I received over 2,500 slides that corresponded to the pages in this book. I had seen many of the slides when they shared them with my family during our infrequent visits to Connecticut. They not only traveled the world, but spent winters in Florida, and summers in England. Some of you might remember the hand-made Christmas cards he made when I posted them to my blog.

I believe I inherited my love of travel, genealogy and photography through him, but not the ability to be organized. He was a NYC architect, so that accounts for his neatness and organizational skills, I believe. Many years later, when the widow was moving, she wanted to get rid of the slides, all in trays, in about 10 xerox paper boxes. Nobody wanted them, but I did express an interest. Ultimately, I got them, and they remained in my basement for about 15 years...never looked at them, so they collected mold.

I know, that's sad and I should have known better. My grandfather would be horrified with me, especially if he knew I had to toss after I went through each slide. I kept maybe 10. To clarify a bit, all slides with family members had been kept by the widow, and I have no idea why this index book wasn't with the slides. I assume she knew about it.

Regretting isn't going to help me now. I can hear my genealogy friends voices now, and believe me I don't know what I was thinking. But a lesson to those who have old photos and slides, don't keep them in the basement.

Since this is the beginning of a new year, I'm going to try very hard to be more organized in my life. Not just with genealogy, but with personal papers as well. Actually, I am going to put the personal before the genealogy as we move into February. He'll be watching me, and telling me to go quicker so I can get back to genealogy! 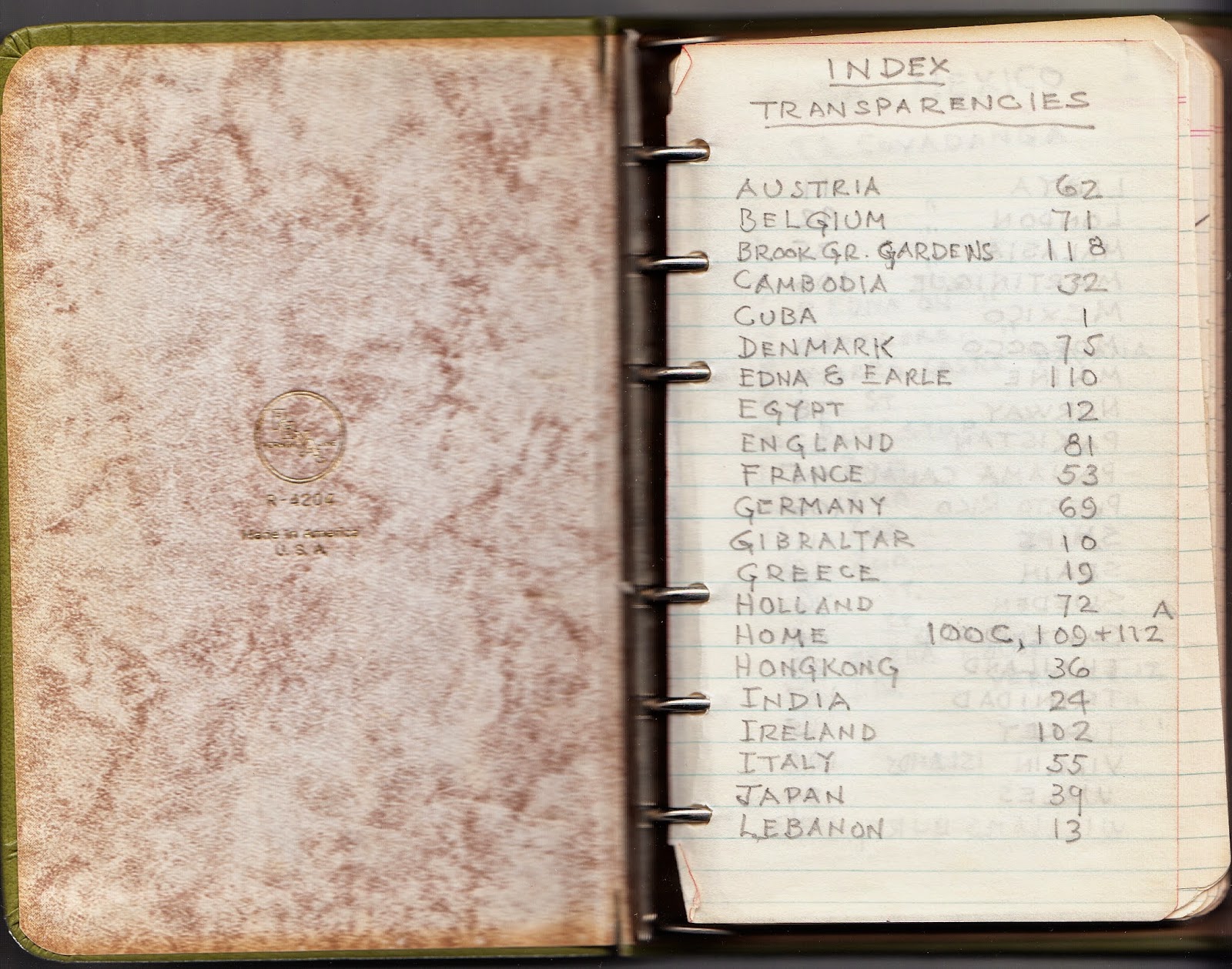 The index (top and bottom) consisted of two pages. You can see for Cuba and Mexico there are two pages,  some countries had many pages. 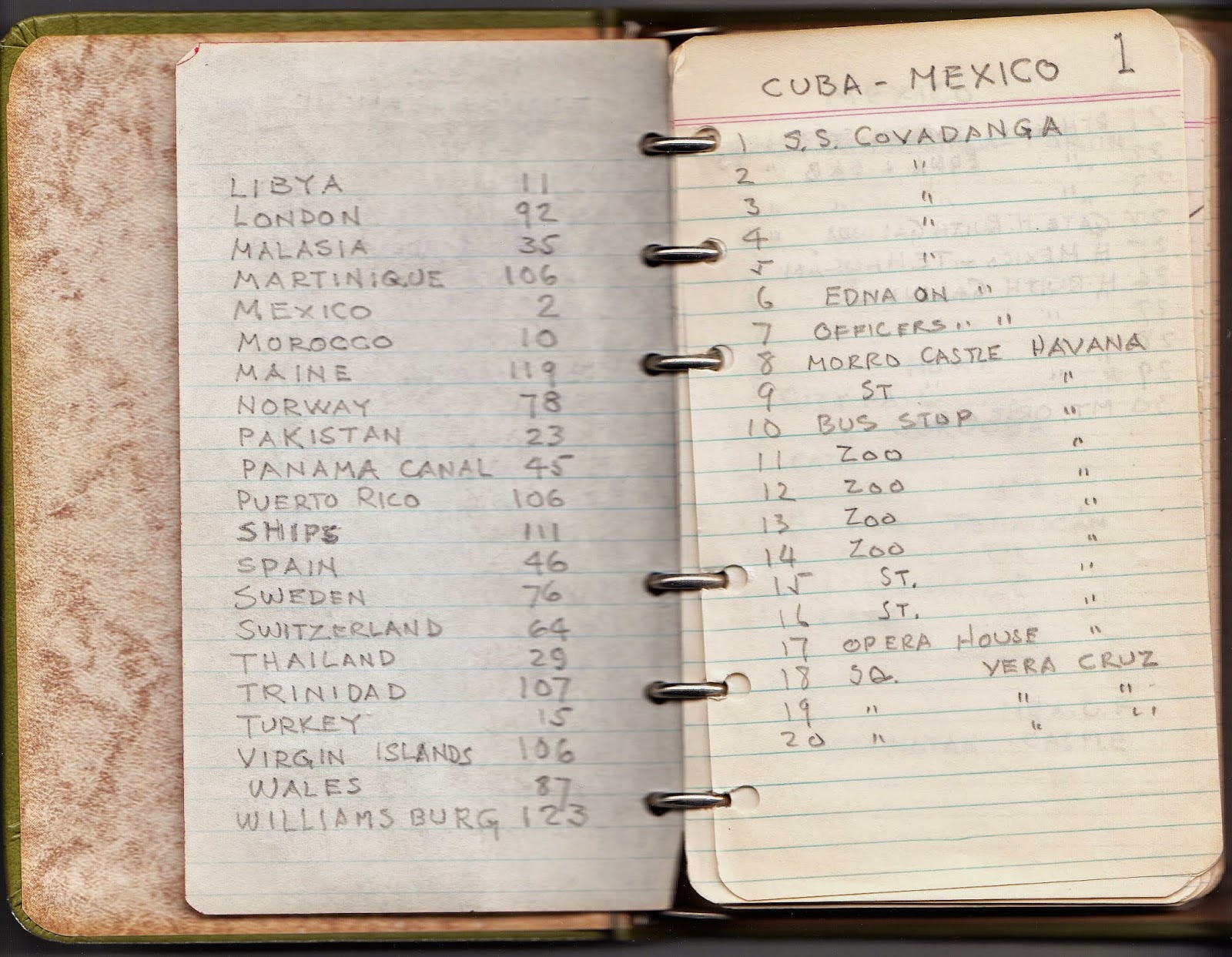 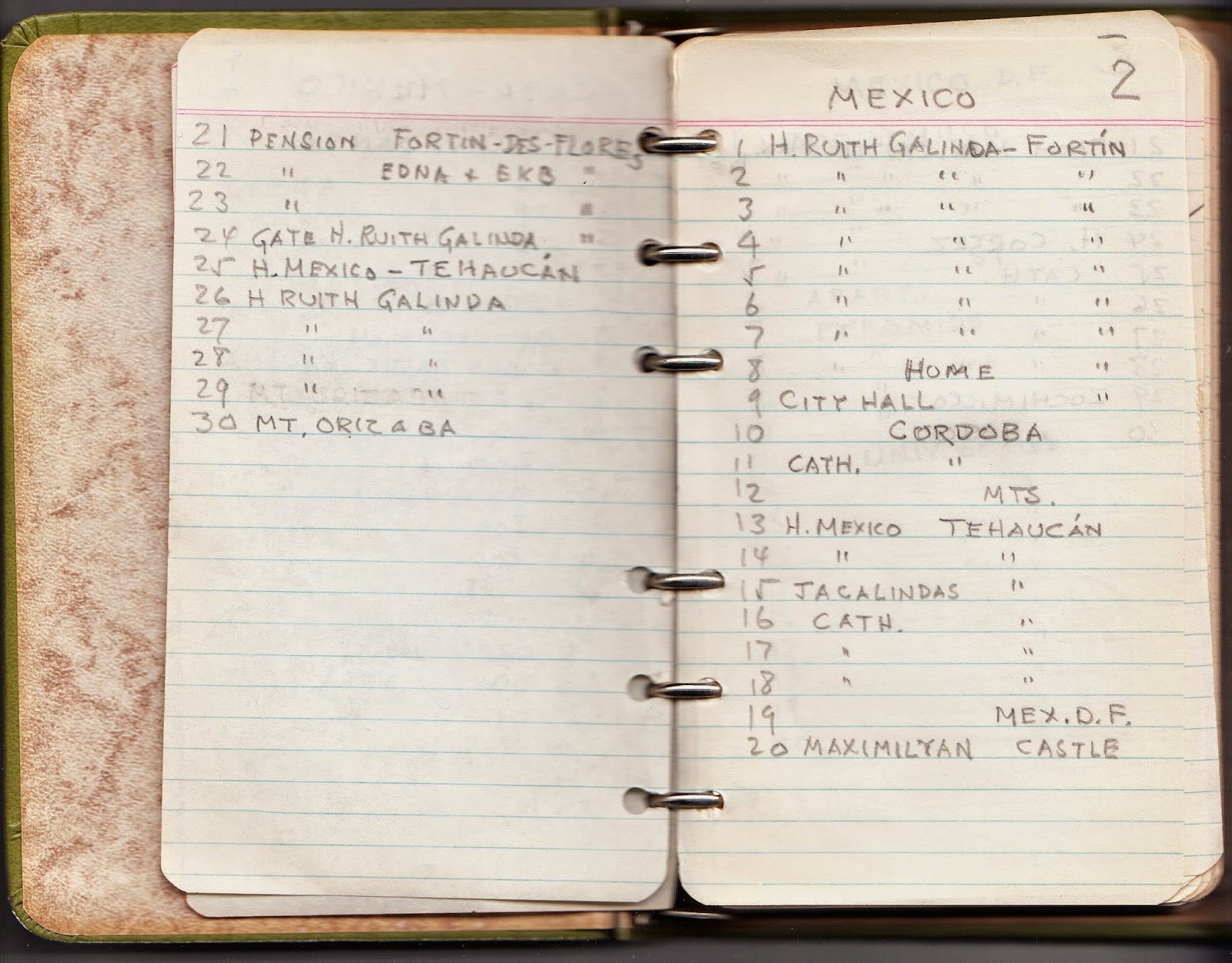 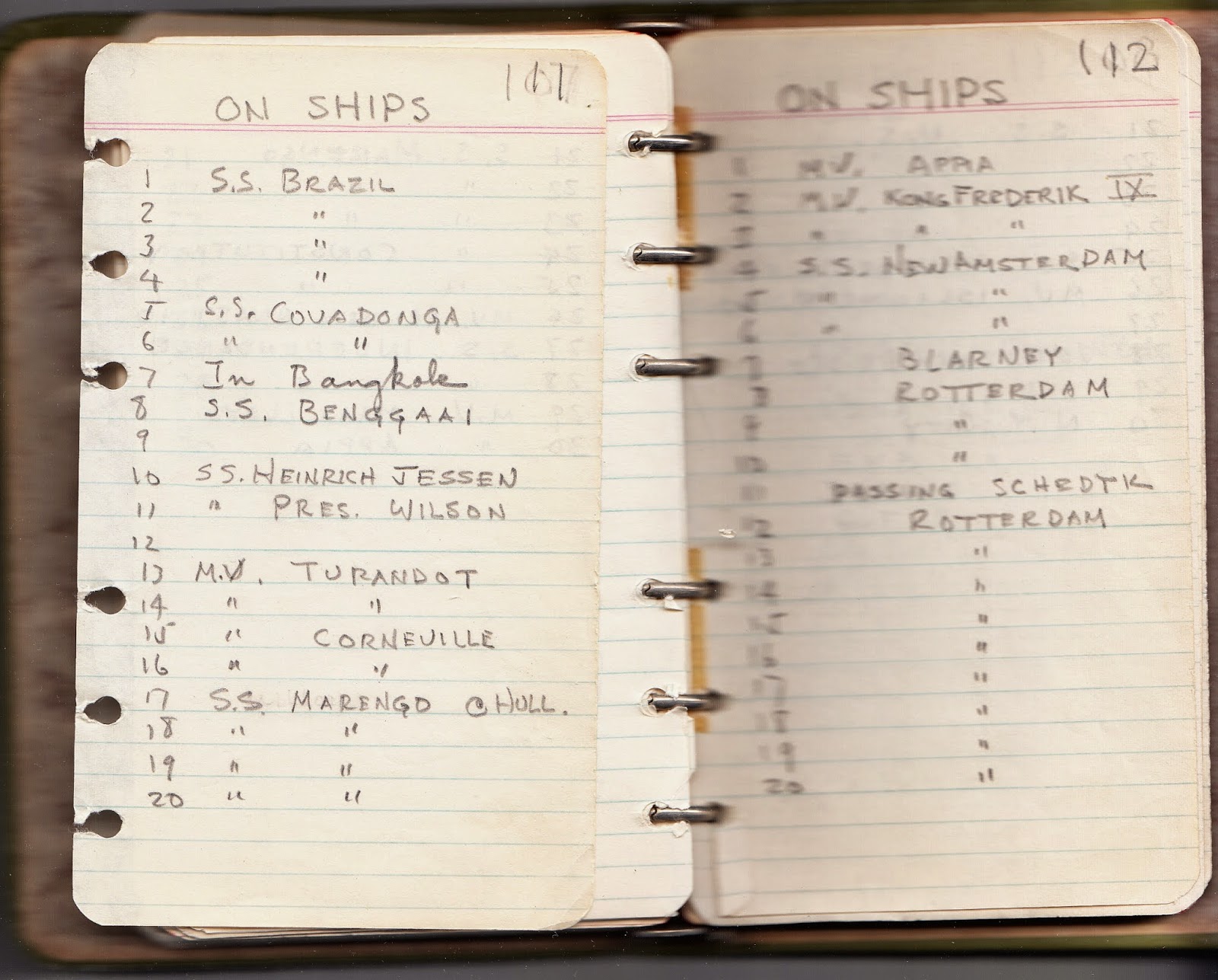