A Prince and a Princess on Veterans Day

November 11, 1985 was a pretty exciting day. The three hour wait to get a glimpse of Prince Charles and Princess Diana was worth the effort. I claimed my spot just about 7 AM on a rather nice sunny day in Springfield, Virginia, outside of Washington, DC. The sharpshooters and press were already in place at the mall parking lot, where the couple would soon be. They were going to open an exhibit of British merchandise (I think clothes) at J. C. Penney's. Once the motorcade arrived, everybody was so excited, esp. me, since I was at the barricade, and had a great view as they drove past me. The photos are the proof. Once they were inside, we all patiently waited to see what would happen when they left. Well, they did both walk over to the crowds, and a lucky few got to shake their hands. There was a policeman in front of me much of the time, so I couldn't take pictures of him. Pretty exciting day for a Veterans Day. 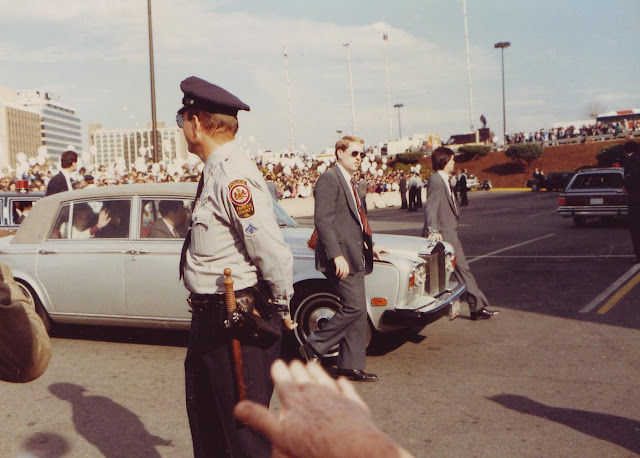 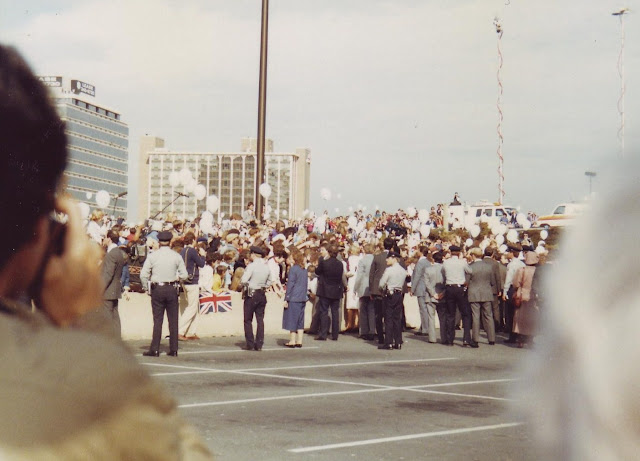 The Princess is in the white suit, standing at the barricade directly in the middle.

Another time, maybe in 1993, I was two blocks from where I worked, and had heard that Prince Charles was going to visit the Octagon House in Washington, DC. So at lunch, I went over with a few co-workers and waited a good hour before he showed up. He gave a quick wave to us, and went inside. No press, and very little security. But it got better...I left work at 4:00 and walked by the House, thinking that just maybe I'd see him again, and I did, with no wait at all. He must have been right on my schedule, because as I walked by, he came out of the House. There were only a handful of people, and he waved and said, "hi." I'll always remember his lovely lavender shirt.
Labels: Celebrity, Location: Virginia, Photos, Princess Diana, Veterans Day
Email ThisBlogThis!Share to TwitterShare to FacebookShare to Pinterest