What a Great site for Free Canadian Records

The Library and Archives Canada (LAC) is an excellent site if you are doing Canadian research. However, for me, all of my Canadian research was done a time-consuming way, by trekking into Boston (a 3 hr.  round trip) and doing the look-ups by hand, using a crank microfilm reader. No computers were used then. Recently, I learned that the call numbers for the documents I found at NEHGS are not the same as for LAC. I was also told that the call numbers from the LDS FamilySearch site will be different, if and when they are put online. In my previous post about locating my Loyalist's  Canadian land records at NEHGS, I'm showing you now how I found that file on this free site.  First go to the Library and Archives Canada site at http://www.bac-lac.gc.ca/eng/Pages/home.aspx. 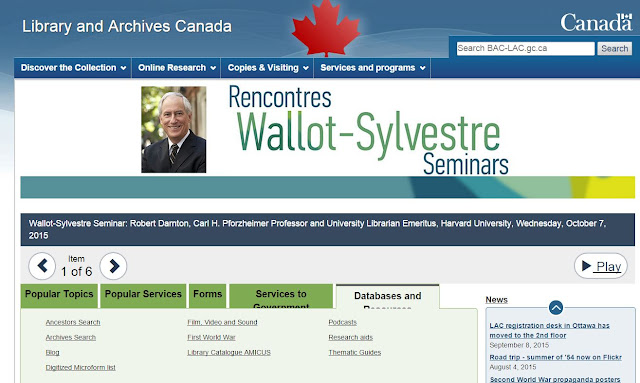 Select Popular Topics, then choose Digitized Microform list. That opens to  Browse by Type (shown below). 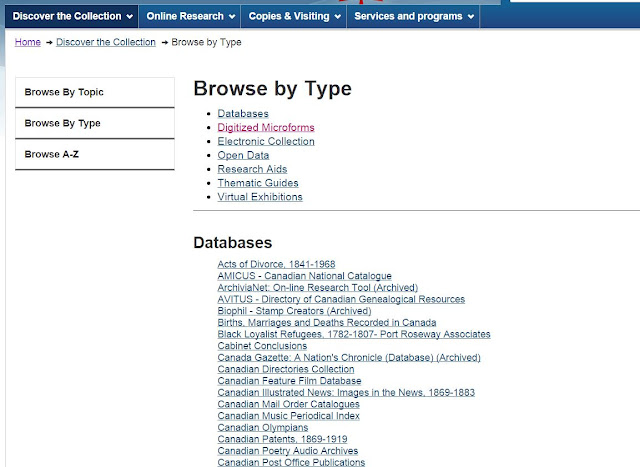 It is a long list, and is continued below. You can see the 3 sites I was looking at.

Click on the Database you need. I chose Land Petitions of Lower Canada, 1764-1841.  It opens to the page below. Click on the Search Database link. 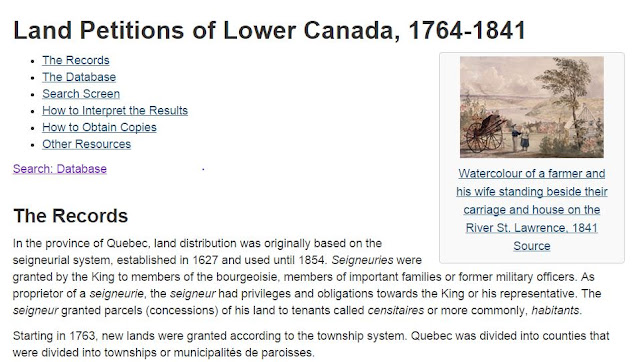 On this Search page, enter your surname, or your given name as well. I usually do just the surname.

Your next page will give you the results, if your name is in the database.

You may have more than one name or similar name show up in the results. Teneick is often written instead of Ten Eyck. Click on the item number you want. My record is shown below. 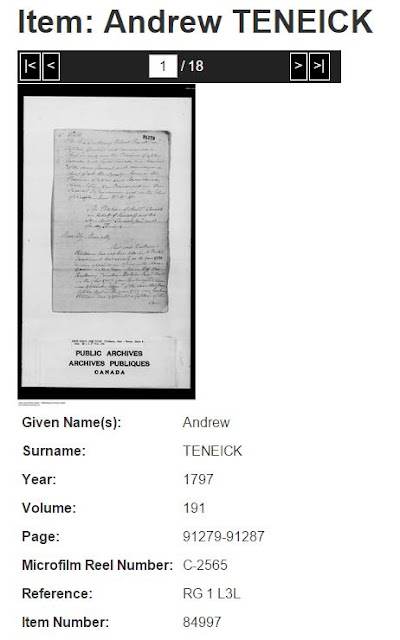 The above page shows the same page that was transcribed in my post of earlier today. Please see: The Father and two Sons, Their Loyalist Documentation, and my Loyal Cousin.

You can also search free indexed records on the www.FamilySearch.org site. Below is what I found on October 14, 2015 and can currently, be seen at https://familysearch.org/search/collection/location/1929950?region=Canada&englishRegion=Canada 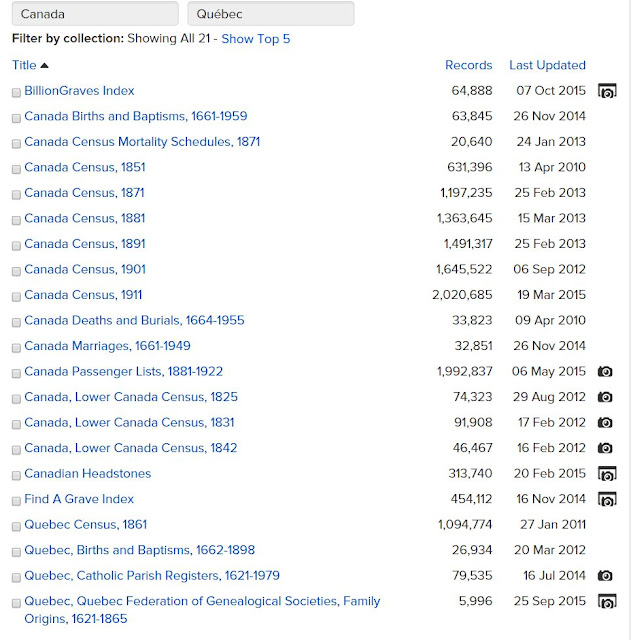 Below are images only, no index. 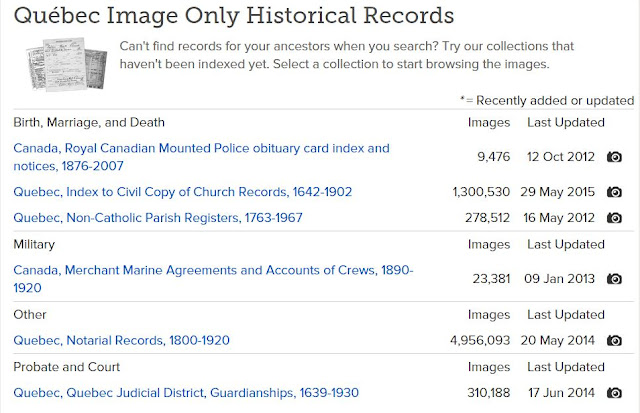 The Father and Two Sons, Their Loyalist Documentation, and my Loyal Cousin

The document I am writing about is about the best you can get, especially since it was dated 1797. It lists not only my ancestor's surname of Teneick / Ten Eyck, but those of his sons, his military career in New Jersey, his move to Nova Scotia with other Loyalists, a return to New York, then a move to Canada. Why haven't I written about this, let's go to the beginning.

Fourteen years ago, I spent endless days at the New England Historic Genealogical Society (NEHGS) in Boston, tracing my Canadian ancestry, the roots of my Canadian grandmother. I located so many records for about 6 of my ancestors there, and ended up copying about 100 pages (about $40 worth). Going reel by reel, and printing the correct pages, but the copied pages were almost impossible to read, because I reversed the microfilm reader to negative, or maybe it was already set that way (black background with white print). No, I never asked for help!

I told of my woes in a post almost five years called, Positive vs. Negative and the Drouin Collection, explaining how I couldn't read a document because of an error I made in copying them.

Fast forward, I didn't do anything with the printed pages, except write about it in the above mentioned blog. So why am I writing about my problem? A 5th cousin wrote me twice. First in January 2013 with a few questions of which I answered in my reply. No further correspondence until March of 2015. This time, we shared quite a bit of information, and one of the things I mentioned was a 9 page document under the title, Land Grant Petition Andries Ten Eyck in Quebec 17 Nov 1797. She was quite interested in it, so I decided it was a perfect time to go back to NEHGS and get "positive" pages. With the help of Rhonda McClure, I was shown how to use their new microfilm scanner/ printer and was able to save my 9 pages to a thumb drive. Soon, the images were on their way to cousin, Susie.

First to find my film, I had to locate the index (shown below in the small box labeled Q4 Index, L5 Spencer, Jonah - Tyse, Index 16. Once I found the name of Andries Ten Eyck in the index, it is imperative to write down the page number. The next step is to find the large box, with the actual film, in this case it was number 16 and search for the correct page for Ten Eyck. 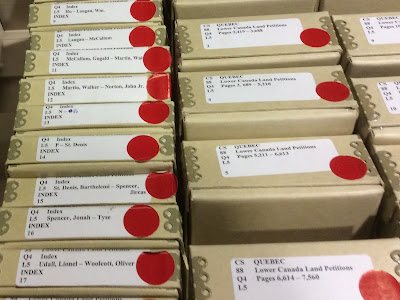 There is a much easier way to locate these records, online for free. The link for that post is called, "What a Great site for Free Canadian Records." 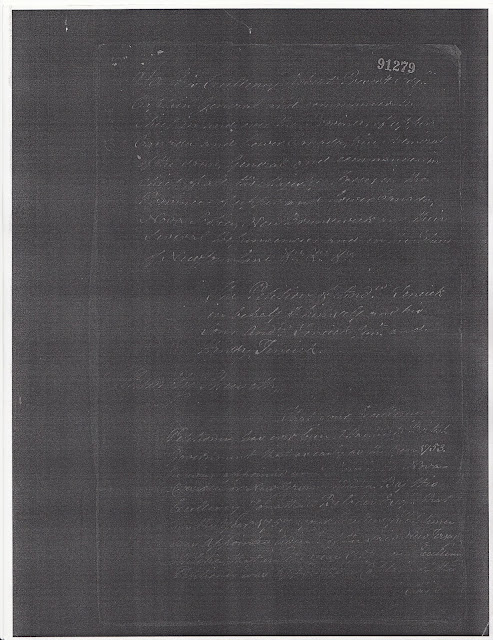 Above is my old copy, and below is the recent one, beginning with the first page of the document, #91279. Now, somebody could read it, but not me. Due to several eye conditions, this was difficult, but before I knew it, cousin Susie gifted me a wonderful surprise. (Note: since the surname is towards the end of the alphabet, this page number is rather large. It give you an indication of how many pages were scanned for this collection.) 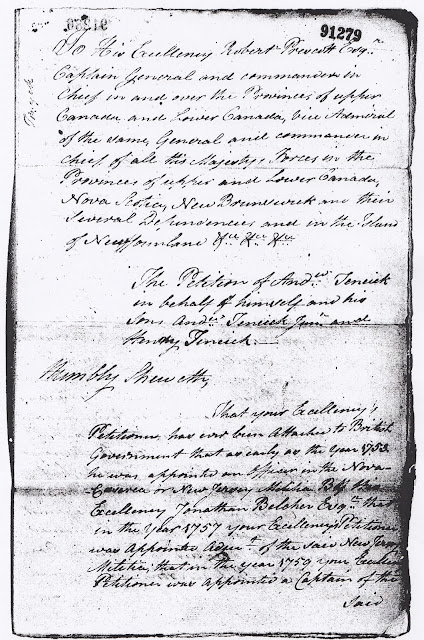 The below was typed by my cousin, Susie.

To His Excellency Robert Prescott Esq. Captain General and commander in chief in and over the Provinces of upper Canada and lower Canada, Vice Admiral of the same, General and commander in chief of all the Majesty 's Forces in the Provinces of Upper and Lower Canada, Nova Scotia, New Brunswick and their several Dependencies and in the Island of Newfoundland

From a knowledge of the character loyalty, suffering, and hopes of the above petitioner Andries Teneick we humbly beg leave to recommend him to His Excellency General Prescott and Council is a man worthy of the Bounty of Government in the Waste Lands of the Crown.

Given under our Hands at Missisquoi Bay,
this 16th October 1797_
Nathan Coffin
Calvin May
John Furguson

I hereby certify that I have known the bearer Andrew Ten Eyck in the County of Albany in Province of New York. In the course of the last war he was taken up and put in prison and from that he was taken and put on board the? Ship in Kingston and in irons and from that he made his escape and fled to New York and joined his Majesty's troops in the year 1778; and lost all his property and now wishes to get some of this Majesty's ? Lands for his compensation.
Given under my hand at Missisquoi Bay this 16th day of Oct 1797
Philip Luke
To all Whom it may concern

I hereby certify that I have known the bearer Andries Ten Eyck before the American Revolution, that he was proprietor of a considerable property and lived very comfortable as a farmer in the County of Albany then province of New York, that from principles of Loyalty to His Majesty and attachment to the British Government, he was ? And was obliged to abandon his family and estate and seek protection under his Majesty's Government at New York, where to my knowledge he remained ? during the War.
May 20th 1794?
A?

I hereby certify that I was well acquainted with Mr. Andries Teneick in the late rebellion in America, that he suffered much in his Person and Property on account of his firm attachments to the British Government, that I was confined in Esopus Prison with the said Andries Teneick and a number of others, that his advice and generous distribution both of money and provisions to the ? Loyal prisoners was of infinite worth then, many of whom must have perished without his assistnce, that all the threats ? of ? the Rebels made him, were never able to alter his attachments, affection and Loyalty to his King and Country.

Petition of Andries Teneick on behalf of himself and his sons Andrew and Henry for 1200 acres of hand each in the Township of Clifton.