"The Happiest Man in Town" Built his House

One of the early discoveries on my Wilder line was found in the Historical Society of Cheshire County, New Hampshire.  I made at least four trips, because there was a wealth of information, including seeing the house my 4x grandfather, Able Wilder built and his cemetery stone.
"HANDERSON HOUSE : 124 Washington Street Circa 1827 Abel Wilder, called the "happiest man in town,"settled in Keene near the close of the 18th century, kept a wheelwright shop, was jail keeper, and built several houses on what was then called Prison Street.
The one numbered 124 Washington Street was built by Wilder and bought in 1833 by Phineas Handerson, the first to practice law in Chesterfield."  The above information is from, Smith, Marjorie W., Historic Homes of Cheshire County New Hampshire, Brattleboro, VT: Griswold Offset Printing, 1968. Pg. 57.

I wonder what made him so happy, he died at age 91.
124 Washington St., Keene, N.H. (spring and fall)
But, it wasn't all that easy researching him.  The death record stated he died in Bridport, Addison Co., Vermont...a rather long way from Keene, New Hampshire.  Of course, we went to Bridport, roamed the cemetery, found stones for his daughter and other family members, but nothing for the 91 year old. Well, wouldn't you know, his family brought the body back to Keene, and he was buried about 2 miles from the Historical Society! 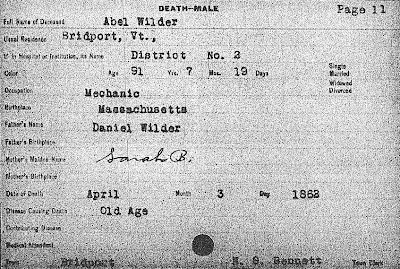