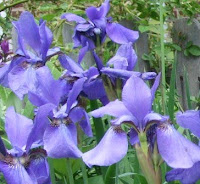 It was quite a surprise to be in the Top 100 Genealogy Blog list from MyHeritage.com.  I must admit, it was nice, but now on to other things.


I received an Ancestors Approved Award from Lisa who writes Old Stones Undeciphered.  Thank you Lisa. When I read her 1920s Beeville, Texas: Shades of the Ku Klux Klan I really woke up at 5:45 AM on a Sunday morning. I know I should be talking about the article, but I was delighted that she had photos of Beeville, Texas. I made many trips to the NARA to use the microfilm to locate a family from there and that memory is very vivid. Why did they move from Michigan to Beeville, Texas, I've often wondered.

Another email came from Brenda of Journey to the Past who wrote, "Do you have grave site photo's? This (West Leroy) cemetery is about 3 miles from where I live." Subsequent emails brought additional information and about 19 photos!  She also drew a detailed map of the cemetery and indicated where my different direct line families were buried! Brenda has helped me in the past in locating a newspaper article about Yates Adams, and his murder / suicide.  She may help me with obituaries too.

Carol of Reflections From the Fence saved my day, as we had been emailing minutes before I discovered I had deleted 1,227 sourced marriages. I must have spent over two hours trying to retrieve it. But, once it is lost, it is lost. However, I was able to do a PDF of 42 pages with another genealogy program (I use 4). With Carol's calm instructions of what she once did, I sat back and tried other things, including locating my backup from the previous night.  It isn't an easy thing to find on FTM06. Anyway, I want to thank Carol for her help. On a genealogical note, she also transferred several of her Find-A-Grave cemetery entries to me.  These were her photos of the TenEyck / Ten Eyck family, and she knew I had that line.


Lester "Les" Larrabee of Bits and Pieces sent me an email with an attachment of a Barnes tombstone. In his note, he mentioned that I didn't have that name in my Surname Saturday for the Barnes name listed that week. Lester knows I have a lot of Barnes, and that is why he sent the photo.  I now have this person entered into my database, and Les gave me permission to put the picture on Find-A-Grave.

Joyce, a friend of mine who took the same Family Tree Maker class with me over four years ago knows a number of my surnames. She wrote about her ancestor, then said, "They were married in St. Armand, Quebec, Canada on February 22, 1813 and the 2 witnesses to the marriage were Abigail's father, Benjamin JOY and a AQUILA KNAP."  She was right, I have that Aquila Knap in my tree. My ancestor and hers knew each other in 1813, pretty amazing.
Labels: Awards, Looking Back, My Heritage, Surname: Adams, Surname: Barnes, Surname: Knap
Email ThisBlogThis!Share to TwitterShare to FacebookShare to Pinterest