During the past two weeks, I have had a number of hits from people using the key words Ogonowski, farm or other combinations. I believe they were sent to my site because I wrote a 9/11 post about the American Airlines Flight 11 pilot, John Ogonowski.


Today, after receiving many more hits, I decided to share what I have on the Dracut, Massachusetts farm. Although, I don't have a lot of information, I was there this past Sunday, two weeks after the 10th anniversary of 9/11 and spoke both with John's sister and his brother. I bought two of the most beautiful mums from James and his sister gave me a postcard, of which I scanned below. In addition, I took the photo.


If you live in the area, I highly recommend you stop by for pumpkins and mums. I will be going back to take photos of John's memorial stone, now surrounded by many mums from people who leave them at this site.

11/12/2013: New videos have been added to this site. Three about the farm, and one, an interview with James Ogonowski and John's widow, Peg. 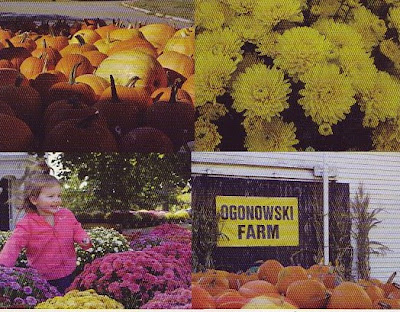 Postcard, front and back. 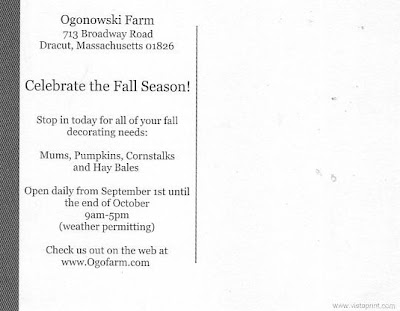