To write about something I remembered about Christmas, as a child, is rather hard, because I have so few memories. Surely, nothing worth sharing.  And, as a teen, I do remember some things, but those events aren't worth sharing either. I only have three memories as a child.  First, on Christmas Eve we opened gifts from our relatives, they all lived so far away, and therefore all gifts were mailed. I don't remember Christmas Day; it probably was like any other day. Second, we did have a tree, but I don't recall ever decorating it. Third, my sisters were six and four years younger than me and always received more gifts because of Santa.  One Easter, my mother called me into the living room where she was writing a letter, and told me there was no Easter Bunny. To which, I replied, "Does that mean there is no Santa Clause?" Her reply was, "yes" and that was that.

(Note: The above flowers are the Santa Clause Shasta Rose.)


As an adult, I made the best of Christmas in my own way.  I took a number of day trips with girlfriends or boyfriends to New York City for shopping, usually for myself.  I loved Saks Fifth Avenue store (photo on left), and Macy's.


My first year in Virginia was in 1974, and I went to Washington, DC to see the National Christmas tree for the first of many times. This photo was from that trip.  A very nice Christmas memory. 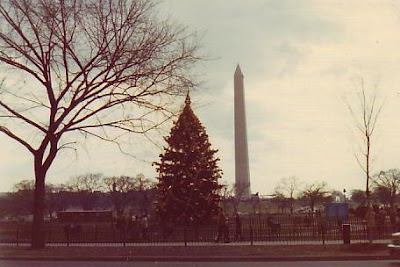 Because I worked so close to this location both at the DAR and Veteran's Administration, I also saw several of the First Ladies place the top decoration on the tree.   They were lifted up in a cherry picker. 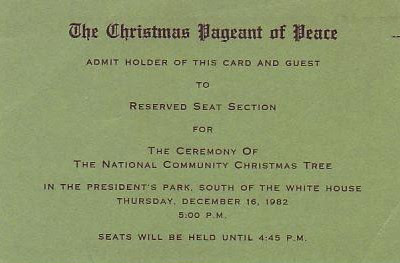 For many years, I went to the Christmas Tree lighting, and was always able to get a ticket.  Fortunately, I worked a block or two away, so it wasn't a problem getting there after work.  One year, after the ceremony, I was walking towards the White House, on the way to get the Metro.  And, in front of me was Amy Carter, 6" away. Before March 1981 (when President Reagan was shot), it was pretty easy to get into any government facility, including the White House, without a pass. So, for several years, I would walk over there during my lunch break, and stroll through the President's house during the Christmas season.  It was so beautiful, and I never any lines to deal with, no long security checks, the guards did just a quick peek into my handbag.

Katharine Hepburn and my DNA 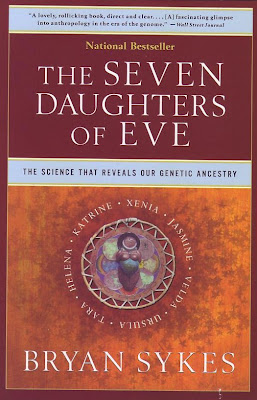 Back in September 2009, the New England Historic and Genealogical Society (NEHGS) send out a notice in their weekly email newsletter with a request asking readers if they would like to participate in a genetics research study,  provided you met the criteria. The screening and research was to be done by Bryan Sykes MA PhD DSc, a Professor of Human Genetics at Oxford, England.  Professor Sykes

The email message stated that Professor Sykes was interested in identifying documented descendants of early (pre-1700) immigrants to New England – and the more lines of descent from early New Englanders the participant has, the better. When I read that, I was thought I might qualify.

First, he wanted our name, town and email address. And, a brief summary of my New England ancestry including the patrilineal and matrilineal elements. Hum, elements, I wondered about that. He wanted an estimate of the percentage of my pre-1700 ancestors who lived in New England. If I met his criteria, I was to email the information to Dr. Sykes in England, and let him know that I would be available to meet him in Boston during the week of September 14–18.


Since I have a lot of old New England Ancestry, and wanted to participate in his study, I dashed off a quick email. I told him that I had 2064 direct ancestors, and that my parents both had New England pre-1700 roots, surnames BISHOP and POOLE. I wasn't able to give him the percentage though, but gave him an attachment of 52 pages with all the names. I guess I thought he would be able to figure it out.


He quickly wrote back saying, "Dear Barbara, Thank you very much indeed for volunteering to participate in my New England DNA study through NEHGS. I would love to talk with you at the Society on Tuesday and perhaps take a DNA sample. Please let me know if that is still convenient. Kind regards, Bryan Sykes"


So on Tuesday, September 15th at 11:30 I met him and his assistant (his charming collage age son), in the Board room. After I gave him additional information, group sheets and such, he said he was going to tape the conversation. Hum, well ok. But I wondered what was I going to talk about? I knew nothing about DNA. He wanted to know about my genealogy research. Oh heaven, now I was happy. Turns out I managed to ramble for a good 45 minutes all about genealogy and how I got started in it. After my talking, I realized that the saddest thing was, I hadn't even googled his name prior to the meeting. I had no idea how well-known he was. But if I had, I might have been a little bit intimidated. So ignorance was bliss in this situation, and I told him. I felt very foolish because I hadn't done any research on him first, and surely didn't ask a single intelligent question. I learned an important lesson that day.


Once my chattering was done, I answered more questions, and filled out a release form, he brought out two DNA test kits. I was glad I passed the oral part. One test was the simple swab swipe. As for the other, he told me it cost close to $300 and that he was giving me the name of Katharine Hepburn for my identity on the DNA kit. He asked what my favorite movie of hers was, and I couldn’t think of one! And I am a true movie lover. After the testing, he gave me a copy of his book, "The Seven Daughters of Eve" and autographed it. When all was said and done, I had my picture taken.


After the appointment, I spent the day in the library, and while there, I googled his name. Maybe he didn't care that I was so ignorant, he was looking for somebody with my kind of roots for DNA analysis. I sure hope my samples helped in some way. It wasn't until later, that I heard about 200 people replied to him. I am indeed very fortunate to have met him, to have the experience, and to have the autographed book. And now, I know a lot more.
Labels: Books, DNA and Bryan Sykes, Location: England, NEHGS
Email ThisBlogThis!Share to TwitterShare to FacebookShare to Pinterest