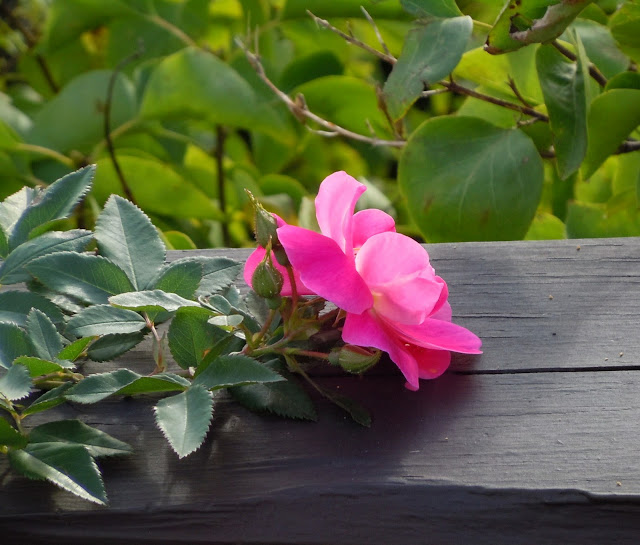 Happy New Year and Don't Forget to Stop and Smell the Roses.
Labels: Holiday
Email ThisBlogThis!Share to TwitterShare to FacebookShare to Pinterest

The Root line is another old New England family. My direct lines are in green.
Generation No. 1

Was it a Revolutionary War Red Coat, or Made Before? 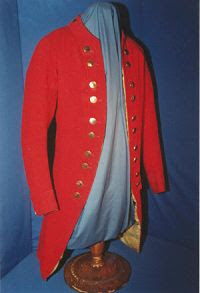 The Revolutionary War Red Coat Worn by my Ancestor Blog has received a large number of hits over the two years since I posted it. When I recently received my copy of a newsletter From Missisquoi Heritage News, the Missisquoi Historical Society, Fall 2011 issue, I immediately noticed an article about my ancestor's coat. (Missisquoi County is in Quebec, Canada, just over the Vermont border, the area is referred to as The Eastern Townships.)


"Restoration Granted
Earlier this year an application was sent to the Centre de conservation du Quebec (CCQ) requesting restoration for the red wool Ten Eyck coat housed in our museum. The coat was donated by the Ten Eyck family many years ago and dates from the pre-Revolutionary War period (circa 1760s) and was brought into Missisquoi County by United Empire Loyalists Andres Ten Eyck in the 1790s. The coat is one of the artefacts in our collection which serves to represent our museum on a national scale.


The application to the CCQ was successful and before the end of 2011 the coat will be leaving our museum and will travel to the CCQ in Quebec for the many months it will take to have the coat restored to an excellent condition."


I then wrote the curator at the Museum to ask a few questions. Heather Darch, wrote back with quite a bit of additional information. I include some of her information below:


"Thank you for your interest in the Ten Eyck Red Coat. It is a fascinating artefact and over the years since the museum obtained it from Mrs. Ellis, there has been a lot of study on it by myself and Revolutionary War experts. The cut of the coat is what makes it a particular mystery as it reflects an earlier time period than the late 1770s era. It is also free of any accessories such as cuffs and collars very typical of the Revolutionary War coats. A great deal of searching has been done on the first owner Andres Ten Eyck as well and his military records are a little unclear. So the provenance of the coat and its date of fabrication was widened to allow me and researchers other avenues of study and possibility. Andres Ten Eyck appears in earlier records than the Revolutionary War so there is a very strong possibility that the coat was made during the French-Indian Wars of the late 1750s -1760s a decade earlier. The style of the coat suggests this is a possibility. I have dismissed the oral legend that was attached to the coat for many years that Andres Ten Eyck wore the coat to avoid being pressed into military service by the British Navy. The military records that have been uncovered reveal that he was very much in favour of the King's army and served in good faith in the King's service and did not avoid active service. His true story is much more fascinating than the "press-gang" story."  She wrote more, which I will share in another blog.


The above two articles were written by Heather Darch, Curator of the Missisquoi Historical Society/Missisquoi Museum, and were used with permission. The photo is from the Society / Museum and permission was granted two years ago.
Labels: Location: Eastern Townships Canada, Location: Missisquoi Co. Canada, Revolutionary War, Surname: Ten Eyck
Email ThisBlogThis!Share to TwitterShare to FacebookShare to Pinterest

The photos of Mary Jane Westover and her husband, James Albert Ryckman were sent to me by Jeannie Slater, after she found a cemetery photo of mine on Find-A-Grave recently. On that site, I have a statement where I allow anybody permission to copy my photos, and they don’t have to ask. I’ve learned it’s better to share, if you don’t you could be limiting yourself from receiving from others.

Jeannie wrote me, we exchanged information and, in-turn, has allowed me to share her photos. I have over 900 Westovers in my tree, and I'm hoping to place Mary Jane Westover into it, and maybe Jeannie and I will be related. 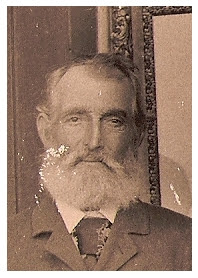 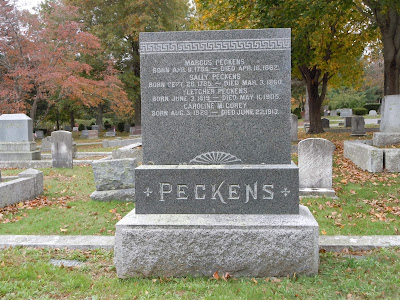 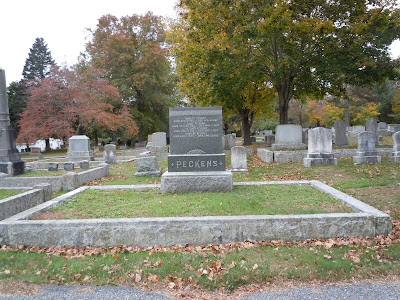 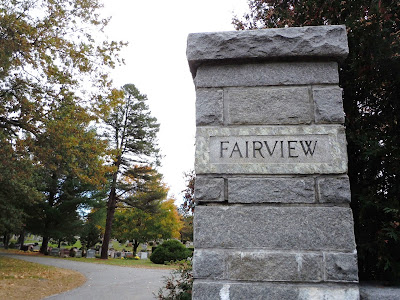 Amanuensis Monday -- Finding the Will of Charles Adams

When I found the below document on microfilm at the Family History Center in Salt Lake City, I quickly wrote down the page number and went to the scanning room where it was printed on two sheets, sized 11" x 17". For over three years, it has been in a pile. How embarrassing now to discover I never wrote down the source, as in the film number or name of the book. All I have are the pages numbered 45 and 46.

However, sometimes my memory bank works. I thought maybe I got the volume number from David Samuelsen's website SAMPUBCO, covering New York Counties Will Testators Indexes,  so I went to that site and selected  to another page where I selected the A-D tab with hope to find my ADAMS surname. Bingo. I now had a listing of surnames in Genesee County, with headings for Name of Testator, Place of Residence of Testator and the last column had County #, Volume # and Page #.

I looked for and found my person: ADAMS, CHARLES W. STAFFORD  NY-19-25-45-48. It showed page 45, which matches what I wrote on the printed will. Researchers are not always so lucky when backtracking to find their original source, but I was lucky. However, I still don't know the FHL film number, but it shouldn't be difficult to find out. 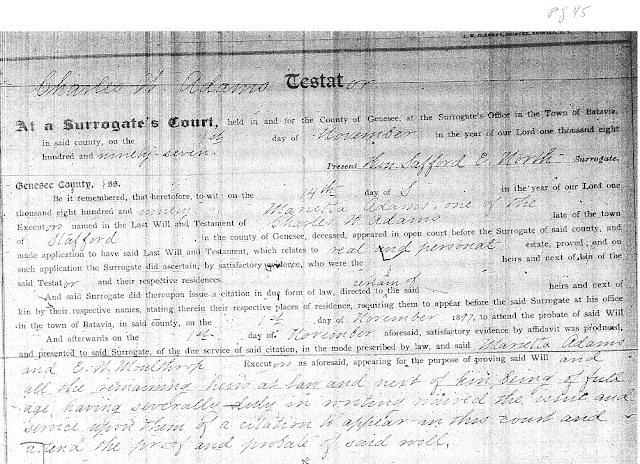 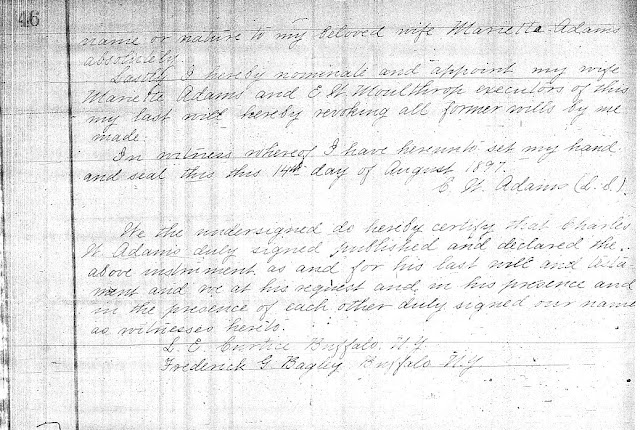 At a Surrogate's Court, held in and for the County of Genesee, at the Surrogate's Office in the Town of Batavia, in said county, on the 1st day of November in the year of our Lord one thousand eight hundred and ninety-seven.
Present Hon. Stafford E. North    Surrogate

Genesee County, }SS.
Be it remembered, that heretofore, to wit : on the 14th day of S___ in the year of our Lord one thousand eight hundred and ninety ___ Marietta Adams, one of the Executors named in the Last Will and Testament of Charles W. Adams late of the town of Stafford. in the county of Genesee, deceased, appeared in open court before the Surrogate of said county, and made application to the said Last Will and Testament, which relates to real and personal estate, proved ; and on such application the Surrogate did ascertain, by satisfactory evidence, who were the heirs and next of kin of the said Testator and their respective residences.

And said Surrogate did thereupon issue a citation in due form of law, directed to certain of the said heirs and next of kin by their respective names, stating therein their respective places of residence, requiring them to appear before the said Surrogate at his office in the town of Batavia in said county, on the 1st day of November 1897, to attend the probate of such said Will.

And afterwards on the 1st day of November aforesaid, satisfactory evidence by affidavit was produced  and presented to said Surrogate, of the due service of said citation, in the mode prescribed by law, and said Marietta Adams and E. W. Moulthrop Executors as aforesaid, appearing for the purposes of proving said Will and all the remaining heirs at law and next of kin, being of full age, having severally duly in writing waived the issue and service upon them of a citation to appear in this court and attend the proof and probate of said will, and no one appearing to contest the probate of such Will, such proceedings were thereupon had, that the Surrogate took the  proof of said Will hereinafter set forth, upon this 1st day of November A. D. 1897, and adjudges and proofs are as follows, that is to say :

In the name of God Amen I Charles W. Adams of Batavia New York being of sound mind and memory do make publish and declare the following as and for my last will and testament.

First I direct all my just debts and funeral expenses to be paid
Second  I direct my executors hereinafter names to place a suitable tombstone over my grave
Third  I hereby give devise and bequeath the use and income of my farm where I now reside to my beloved wife and after her death to my brothers and sisters Horace Adams Quincy Adams George Adams Jane Jones and Mary Blair
Fourth  I hereby bequeath to Jane Adams the sum of three hundred dollars
Fifth  I hereby bequeath to Mary Jones Hattie Blatchford Ada Sherwin Emma Blair and Charles Adams each the sum of one hundred and fifty dollars.
Sixth  I hereby give devise and bequeath all the rest residue and remainder of my estate of whatsoever name or native to my beloved wife Marietta Adams absolutely.
Lastly, I hereby nominate and appointment my wife Marietta Adams and E. W. Moulthrop executors of this last will hereby revoking all former wills by me made.

We the undersigned do hereby certify that Charles W. Adams duly signed published and declared the above instrument as and for his last will and testament and we at his request and in his presence and in the presence of each other duly signed our names as witnesses hereto. 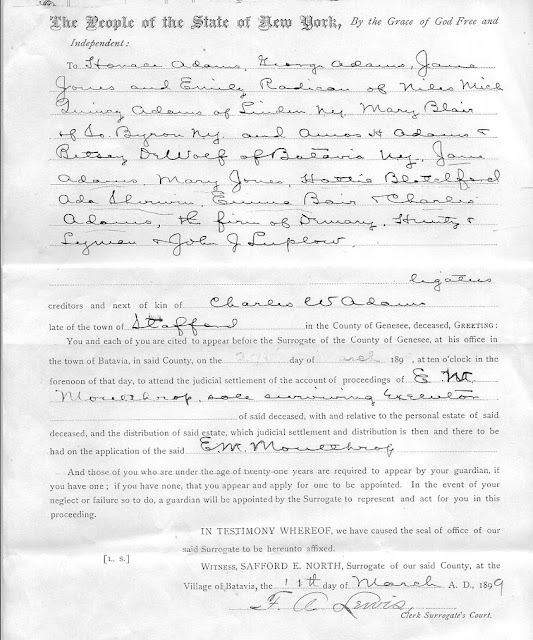 Amanuensis Monday was begun by John Newmark of the TransylvanianDutch blog. The term means, "a person employed to write what another dictates or to copy what has been written by another." Many bloggers enjoy doing this because it allows them to freely copy something that has been written.
Labels: Amanuensis Monday, Location: New York, Research Tips, Surname: Adams, Will
Email ThisBlogThis!Share to TwitterShare to FacebookShare to Pinterest

The below listed names were taken from The Lowell Sun newspaper's obituary section for this week. (If there is an * by the name, it means I knew that person, and you may write me if you have questions.)