Was it Washington or William who was Killed at 85?

Sometimes a second cousin, 4 times removed can drive you nuts. With a partial newspaper clipping of his death, all I had was the last name, and no idea who his daughter was. My quick solution was to ask for help from Susan Petersen of Long Lost Relatives blog to see if she subscribed to a newspaper database for her town, since the death of my Mr. Schrambling or Scrambling died there. I had just discovered a clue as to his first name. Below is what I wrote her.


"I have a partial news clipping, dated Sept. 20, 1933, from The Lincoln Star.  it is about a Mr. Schrambling who was killed by a Walton C. Roberts. Other clues didn't help because I don't have the married names of his daughters OR His first name. I googled Schrambling + Lincoln, and one thing that came up was FAG. Going to that, I saw..."

Within minutes, Susan found three newspaper articles all for a William Schrambling and his unfortunate death. But once my research began, I found nothing for William, but a lot for Washington W., who died the same date. Five censuses listed him as Washington or Wash (I am missing 1870, 1910 and 1930). It appears this man went by Washington or Wash, but his daughter, and Lincoln, Nebraska knew him as William.

The Lincoln Star, Sept. 20, 1933
"Injuries Fatal to Schrambling
Inmate
Struck by Car While
Walking in Road.
William Schrambling, 85, an inmate of the county farm was injured fatally when he stepped into the path of an automobile driven by Walton G. Roberts, 1515 L Street, about 7 o’clock Thursday evening, while walking on the highway near the farm about seven miles north of here.
County attorney Max Towle announced Wednesday morning that no inquest will be held in the death.
The injured man was brought to the Lincoln General hospital and died a few minutes after, death probably being caused by a concussion of the brain. He suffered a fractured left leg, fractures of the skull and numerous lacerations about the head. Medical attention was given by Dr. R. H. Sawyer.
Mr. Schrambling with Albert Tulley, another county inmate, was talking toward on the west side of the road. Mr. Roberts and his wife, driving north, saw the men approaching and slowed down, he stated. Just as he came even with the men, he said Schrambling suddenly appeared in front of his car. He swerved in an attempt to avoid an impact, but the car had already struck the aged man.


It seemed that Schrambling apparently became excited and ran directly into the car after being safely on one side of the grade, according to information obtained by A. Hughart who investigated the accident. Tulley told officials that he tried vainly to pull Schrambling out of the way.
Mr. Schrambling has been at the farm about three weeks this fall, said Mrs. W. W. Scofield, farm matron. He spent the summer on a farm east of . He was cared for at the farm last winter after being discovered living in a boxlike hut in an old building excavation at Ninth and O streets.
He is survived by a daughter, Mrs. Agnes Sagenuk of Soulian, Mont. The body is at Roberts." 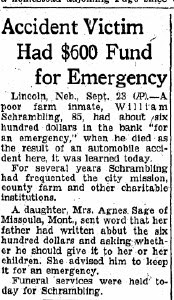 Register Report for Washington (aka William) W. Scrambling
Generation No. 1