The Royall House and Slave Quarters, At One Time this was the Most Expensive House In Medford, Massachusetts 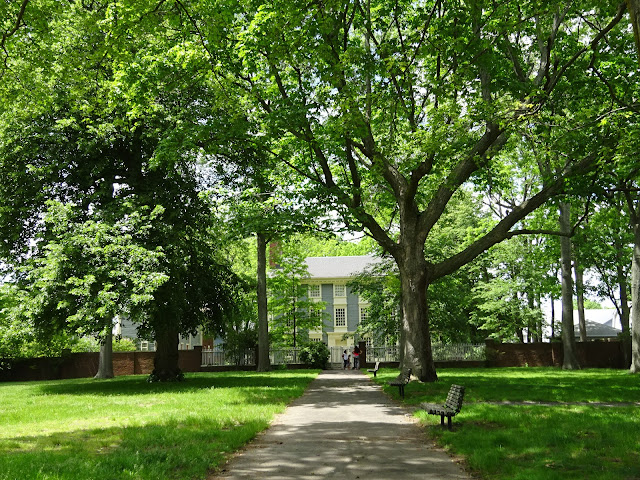 The Royall House (above)  and Slave Quarters (below) is located at 15 George Street  in Medford, Massachusetts. Facing the Royall House, I took the above photo from Royall Park (city owned). Both the owner of this house and my ancestor lived in Medford at the same time, and I often wondered if they knew each other.

My first post in over seven months was prompted because I mentioned on facebook that I had visited the Royall House and some readers showed an interest in it. Since I took so many photos, I thought I'd share here. Another reason for this post is the fact that I had quite a number of ancestors who lived in Medford, about eight were buried nearby, and the fact that one of my Poole ancestors also owned slaves in Medford. 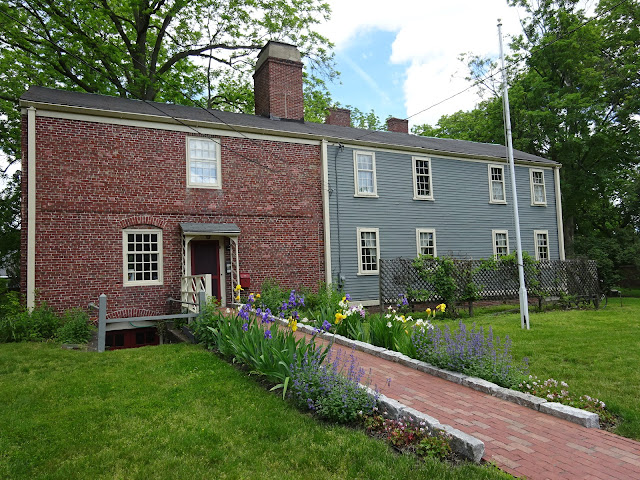 The Slave Quarters building is to the left of the house, easy to see if you walk around the property. Parking is on the residential street (plenty of it).
To enter the reception room, use the walkway shown above. Hours and days for one hour tours are listed on their pamphlet shown at the end of the post. 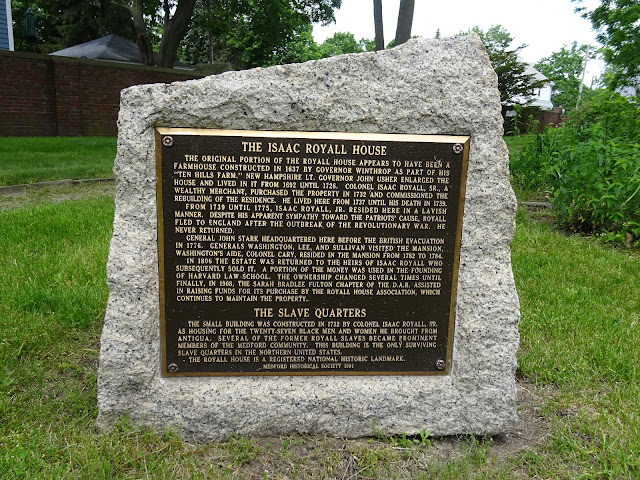 The original portion of the Royall House appears to have been a Farmhouse constructed in 1637 by Governor Winthrop as part of his 'Ten Hills Farm.' New Hampshire Lt. Governor John Usher enlarged the house and lived in t from 1692 until 1726. Colonel Isaac Royall, Sr., a wealthy merchant, purchased the property in 1732 and commissioned the rebuilding the residence. He lived here from 1737 until his death in 1739.

From 1739 until 1775, Isaac Royall, Jr. resided here in a lavish manner. Despite his apparent sympathy toward the patriot's cause, Royall fled to England after the outbreak of the Revolutionary War. He never returned.

General John Stark headquartered here before the British evacuation in 1776. Generals Washington, Lee and Sullivan visited the mansion. Washington's aide, Colonel Cary, resided in the mansion from 1782 to 1784.

In 1806 the estate was returned to the heirs of Isaac Royall who subsequently sold it. A portion of the money was used in the founding of Harvard Law School. The ownership changed several times until finally , in 1908, the Sarah Bradley Fulton Chapter of the D. A. R. assisted in raising funds for its purchase by the Royall House Association, which continues to maintain the property.

The small building was constructed in 1732 by Colonel Isaac Royall, Sr. as housing for the twenty-seven black men and women he brought from Antigua. Several of the former Royall Slaves became prominent members of the Medford community.  This building is the only surviving slave quarter in the Northern United States. 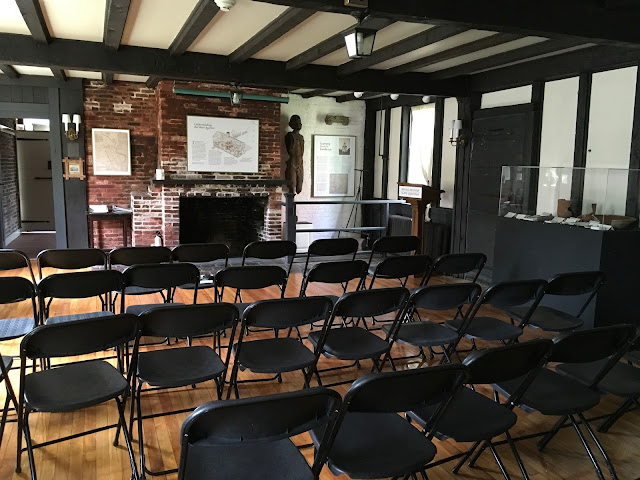 After you register in the outer room, this is where the orientation for the tour begins. Restrooms are here as well. 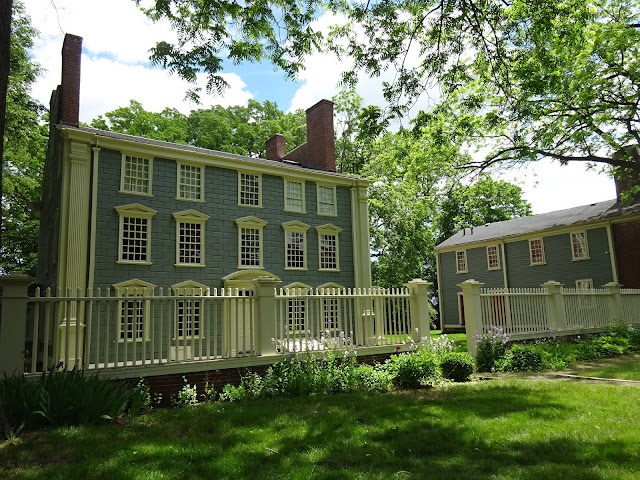 The day we went was a perfect June 4th Sunday. Since there is no air-conditioning, you might want to go on a cool day. We were shown several rooms, on the first and second floors. (Since I don't know if it's handicap accessible, you might want to call first.)

Miscellaneous photos below. I loved the Delft tile work, unfortunately, I didn't take photos. Be sure to look at their link, as they have a lot of old and recent photos posted. http://www.royallhouse.org/ 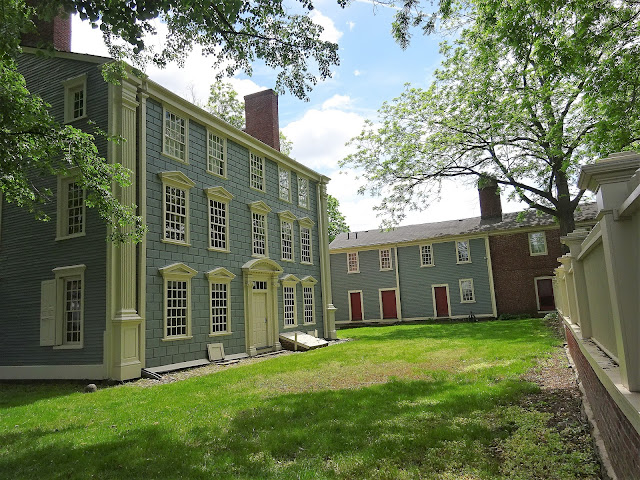 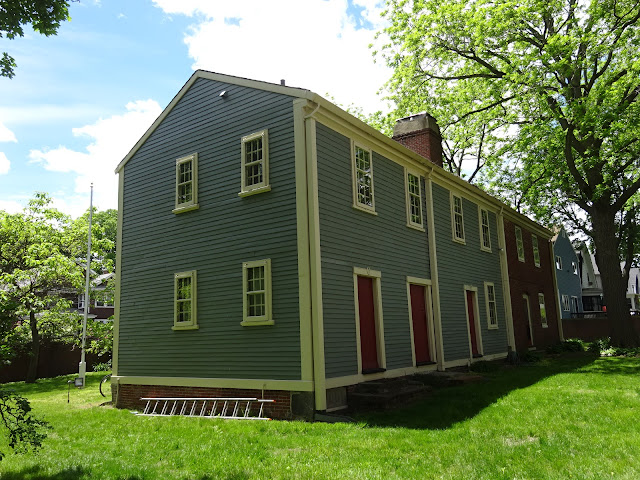 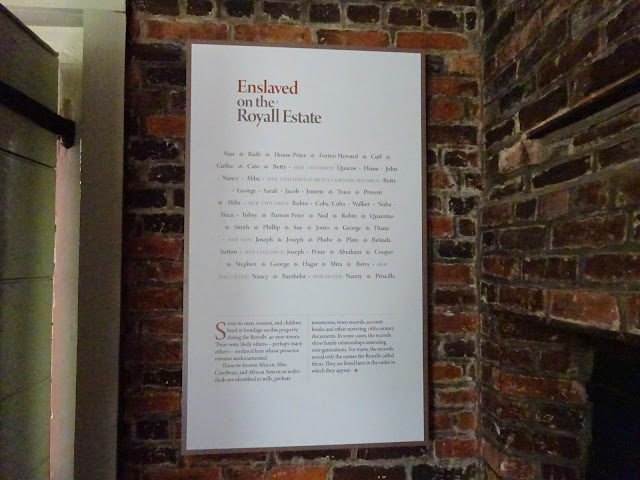 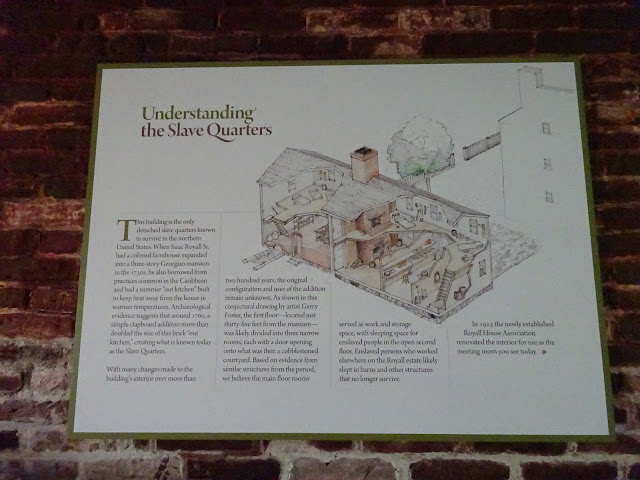 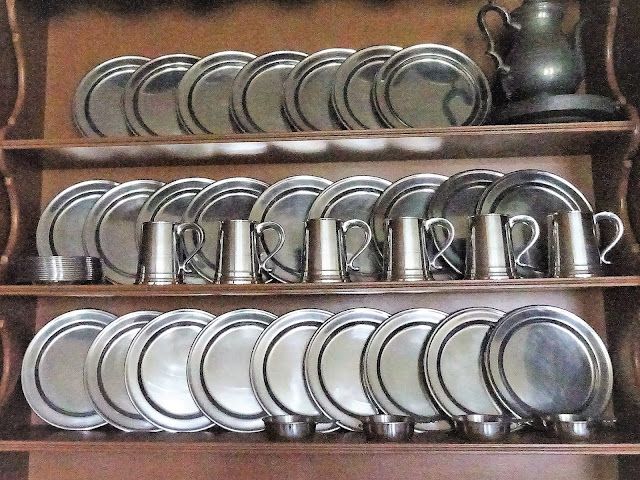 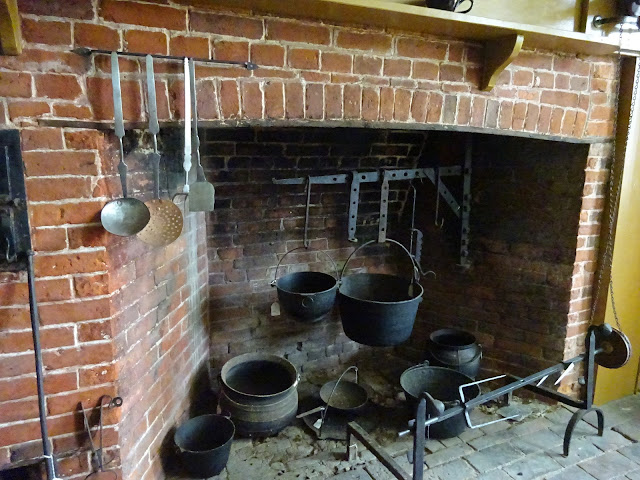 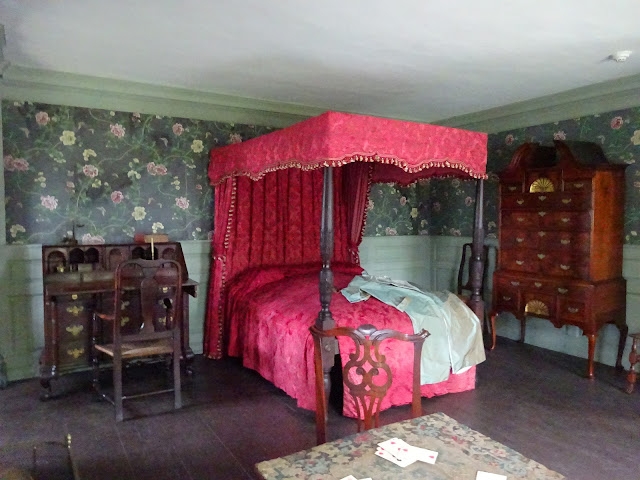 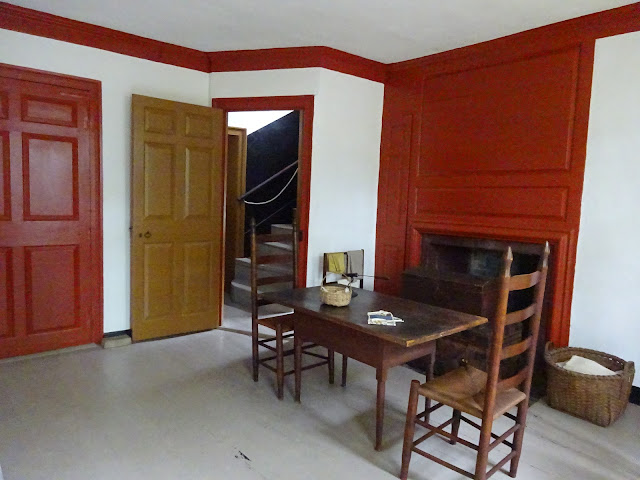 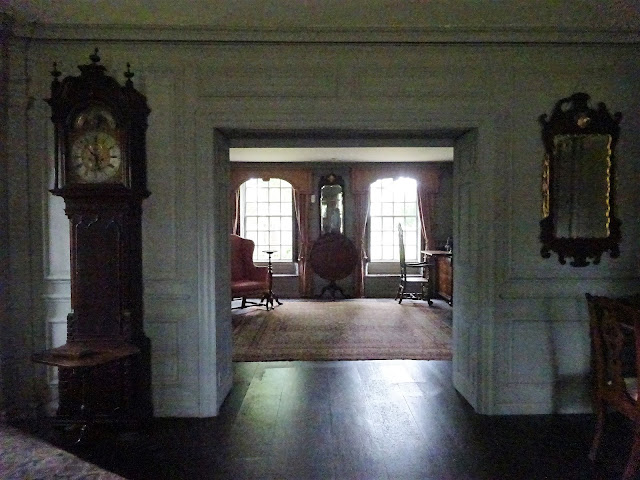 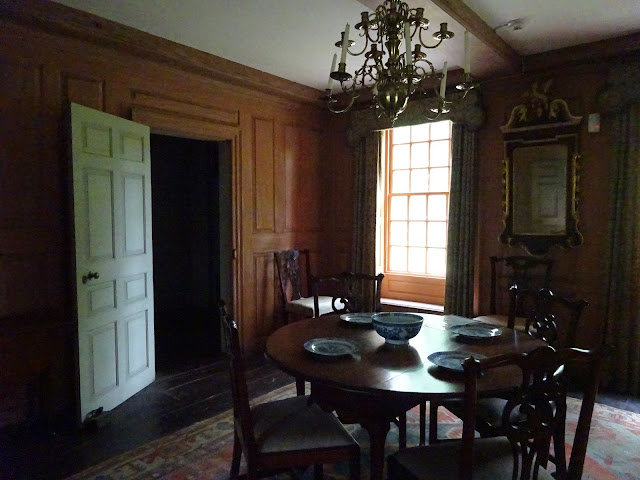 My local library has a copy of the History of the town of Medford, Middlesex Co., Massachusetts, from which all the below pages were copied from it. Pages 554-556 is a genealogy of the Royall family. 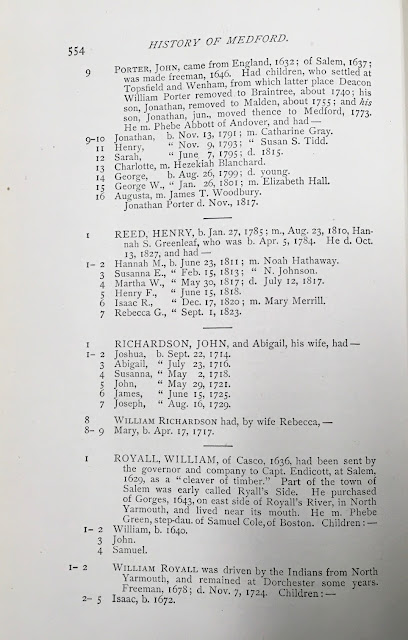 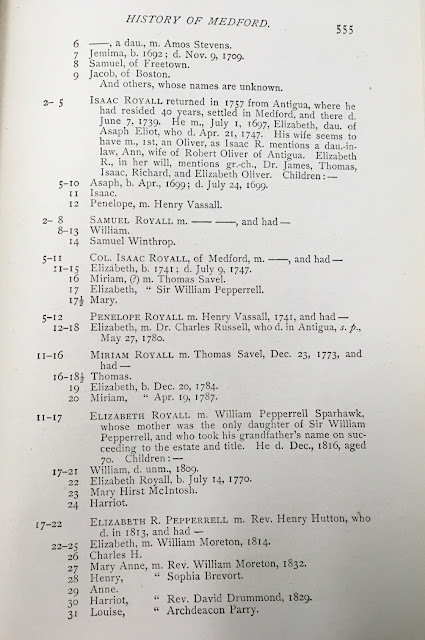 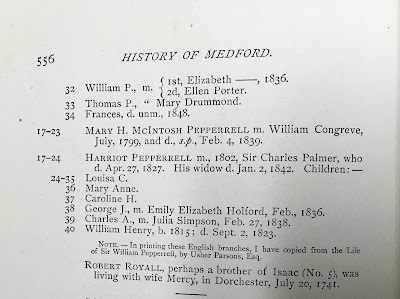 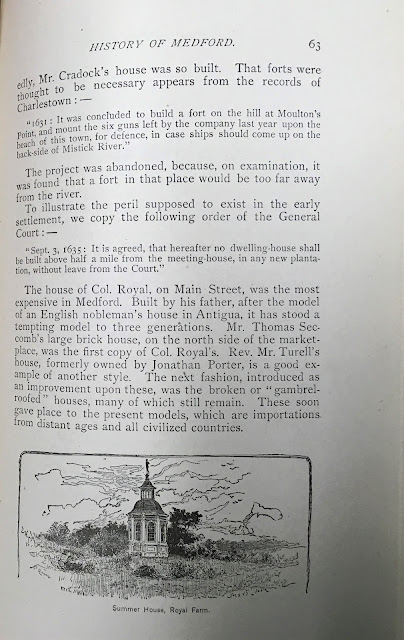 The paragraph above describes his house, and below is a list of his slaves. My Zachariah Poole had one slave listed (he had at lease 2) and 12 named slaves of Mr. Royall were listed. I also saw many of the names in the vital records for Massachusetts.

Medford in the War of the Revolution. [Jan. 1899] "At the time of the Revolution several gentlemen in Medford owned slaves. They were uniformly well treated. Mr. Zachariah Pool owned a slave named Scipio. In his will Mr. Pool left money to Benjamin Hall' and others, in trust, for Scipio's support. He was boarded with a family of free negroes, and when he died his guardians followed him to the grave. This story was told me by one of Mr. Pool's descend- ants, and is in contradiction of Mrs. Lydia Maria Child's version, in one of her books, which says that Scipio was sold at the settlement of the estate. The negro's name appears on the tax list in 1778." 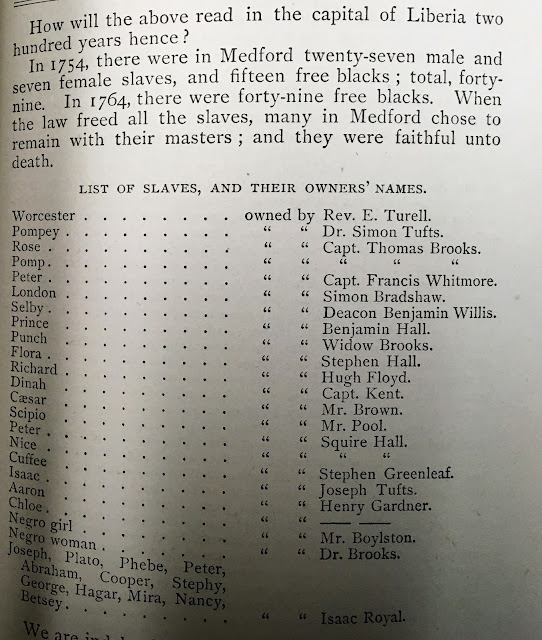 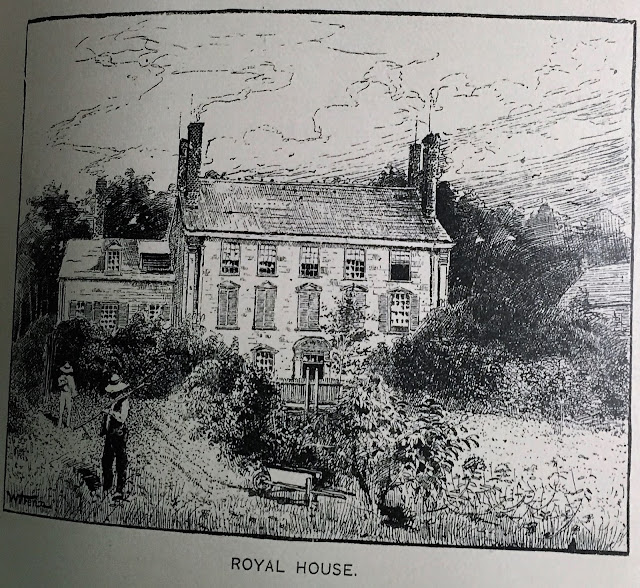