Why do some people love cemeteries so much? Is it because of the peace and quiet along the trails and paths, your curiosity, thinking about the unknown stories that lie beneath the stones, the beauty of the surroundings or the fun in discovering who you are looking for?

I'm covering some of the cemeteries located in Lowell, Massachusetts because this is where I live. I have no relatives or family buried here. My in-laws were buried in the next town. Since I often help people with their Lowell genealogy and I've posted a good many Lowell Cemetery cemetery stone photos on this blog, I thought it was about time to give you some information on this subject.

There are quite a few cemeteries in the city, all sizes, some private and one, the Hildreth Cemetery is always locked, this is where Major General Benjamin F. Butler was buried. A list of all cemeteries was prepared by several agencies and groups and may be seen HERE.


The Lowell Cemetery, est. 1841, is one of the original Garden Cemeteries in Massachusetts. This is where I go to get the first feel of spring and say goodbye to the last of the red leaves in the fall. The cemetery is very hilly, with narrow roads and lots of paths. A lot of the burials are on FindAGrave, but if you want to physically visit the site, you can call the cemetery office and get the street name and location. The site states 6,259 were buried here with 75% photographed.

My post about the above garden cemetery and two others in Massachusetts may be seen HERE.


Below are photos of the two entrances and a brochure of the cemetery, with map and listing of all street names with a grid. 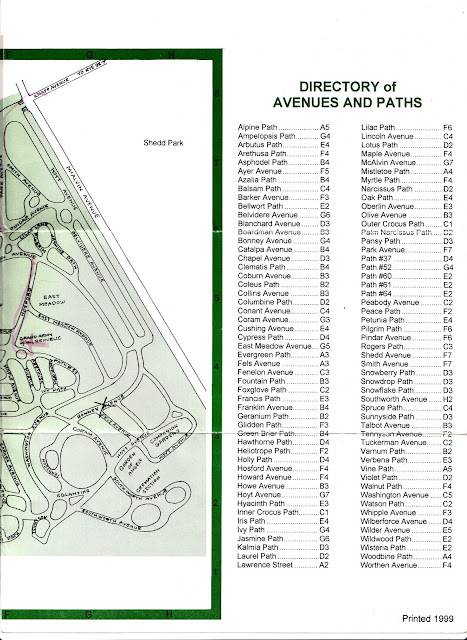 There are two entrances, the Knapp Street entrance, off of Rogers Street (Rt. 38), near Shedd Park and the Lawrence Street entrance. Since this is a private cemetery, the gates are locked in the evening, and opened at 8 am. Unfortunately, the map above was too large to scan for this page. 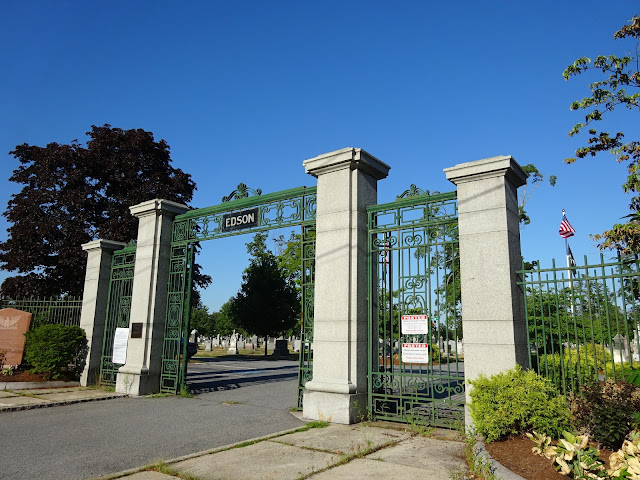 The 1845 Edson Cemetery is large, but because the roads are wide and the entire area if flat, it's easy to find your way around, especially if you stop in the office for directions and information. I have done a lot of look-ups here and found the staff very helpful. From their website is the below information:

"​The Edson Cemetery Office is located at 1375 Gorham Street and can be easily reached as follows:
Additional comments, questions or concerns?  Please contact the Cemetery office at 978-970-3323."

The Find A Grave site states there are 3,580 burials and 51% have been photographed. 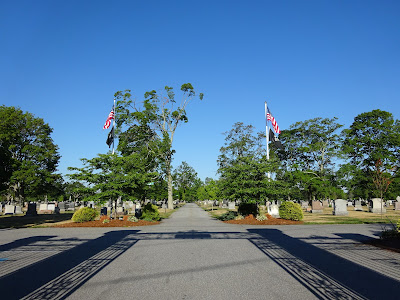 Entrance to the cemetery, photo taken under gate. Office on the right, with plenty parking. Writer Jack Kerouac is buried here (map and photos from my blog). 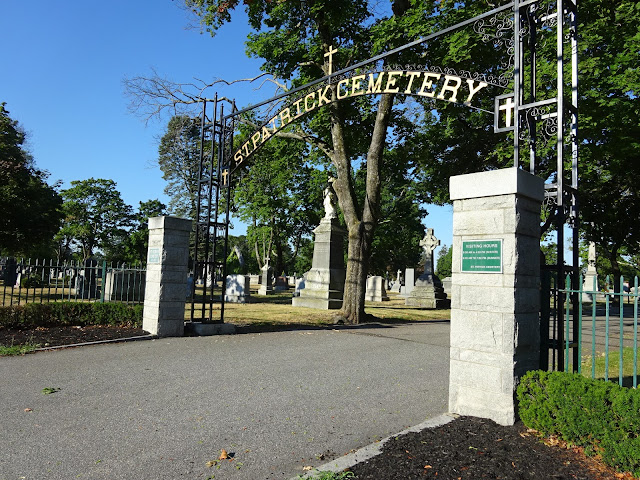 St. Patrick Cemetery is next door to the Edson Cemetery, so it is also very flat and looks similar. There is a large gate, locked at night, and the office is on the right. Per their information, "Records from 1832 to 1894 at St. Patrick Cemetery are incomplete and are not available online at this point in time. They do have Genealogy Burial Listings from 1895 thru 2011.
According to FindAGrave, there are 46,903 interments and 25% have been photographed.

This cemetery has the most detailed website, with everything you want to know, like a map, and complete listing of everybody buried there. In addition, some show the funeral director's name. Many Lowell Catholics were buried here. 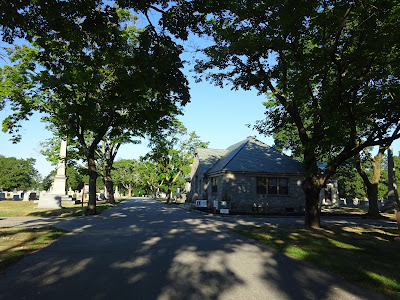 Cemetery Office on the right, as you enter through the gate. 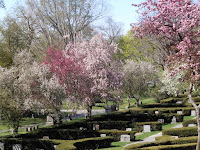 A few weeks ago, I received a message from Christer, a gentlemen from Sweden who was researching Mr. Paulson, a family member, in Lowell, MA, where I live. The writer found me by seeing my post, Doing Genealogy in Lowell, Massachusetts? Here is Help. I don't have ancestors or family from this city, but since I had just written the post about Lowell research, I wanted to be put to the test with my knowledge. We corresponded several times, and he told me all that he knew about Mr. Paulson, proving to me, he is an accomplished researcher.

Below are a few things he wrote:
"I've found .... - him in the census' 1900, 1910, 1920, 1930 and 1940. - his lodge membership card. (mason lodge) - his social security number: 004-07-3168 - out he died in Feb 1978, in Lowell - his WW1 and WW2 registration cards - I have also found him in several city directories. I would really love to find out if he had any children! And of course if you can find an obituary, maybe that will give me some more information!? Somewhere, I don't remember where and can't find my notes about it, I saw he were politically active. Maybe that's could be a way to go.... And most of all I would jump of happiness if I could find a photo of him or his relatives. I guess it is to ask for too much but as we say here in Sweden - Frågan är fri! (The question is free of charge!)"

Christer sounds just like all of us, it doesn't matter where a researcher lives, we get excited, and know we too "would jump of happiness if we could find a photo of him". Actually, he now knows more then he ever expected to. All it takes is locating somebody in the same town/city as the person you are researching and is willing to help out.

During several days, I took photos of where his Famagust Paulson lived in 1940, found the exact death date from the Social Security Death Index (he had just the month and year), got a certified death certificate an obituary and went to the cemetery for tombstone photos. In other words, almost a complete package.

Getting a vital record from a city or town hall, is always easier for you and the clerk if you provide the correct date. Your wait won't be too long, and the clerk isn't frustrated by not being able to find it. Lowell record books are huge and heavy, and I'm quite sure they don't want to carry one back to the safe to get the "correct" one. At the city hall I quickly got a copy of his death certificate with all lines filled in, including the father's name, which was unknown to Christer.

I have gotten many certified copies of records for various people, including my husband and his family. I'd wait and wait, and listen to the old typewriter make it's noise, and once in a while, a report would have to be retyped. But not today! I noticed immediately, that the clerk was typing on a computer! I asked a few questions and discovered that no longer will a record have to be typed twice or more times, for once the original is saved it will be used for anybody looking for that particular individual. If you need 10 death certificates for a person, you won't have to wait for each be typed. Lowell had entered the modern age for researchers needing these records. I doubt if they will be online though. (If you look at the death record below, you'll see it has a Date of Record of February 21, 1978, a few days after the death.)

The city library is next door, and that is where the newspapers are kept. The four seats for the microfilm readers were empty, and I found the roll I needed. Famagust's death was February 17th, but the obituary was printed the following day and, it's far larger than I expected, plus there was a photo, very good news for Christer!

In addition, I went to the Lowell Cemetery and found the burial site for Famagust and his wife. Photo shown below.

Obituary was transcribed, see below. 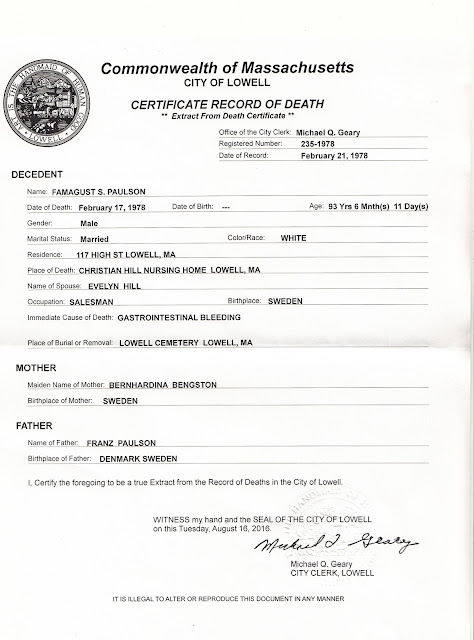 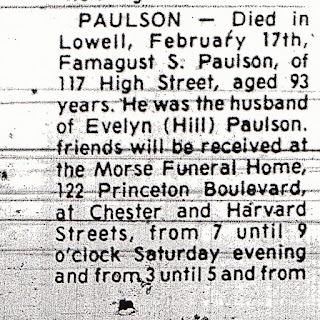 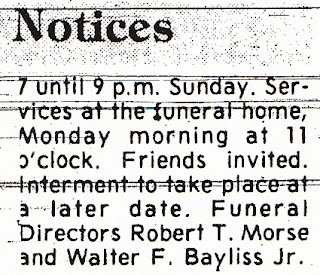 He was born in Denmark, the son of the late Franz and Bernhardina (Bengston) Poilsen but had come to this country at the age of eight years, having lived in Provincetown and Springfield, before establishing his residence in Lowell, 40 years ago. For a period of twenty years, he had been a salesman for the former Brockelman's Market, having retired in 1950. Prior to that, he had been a chauffeur in the Washington, D. C. area, for many years, having left there in 1930. Very active in local politics, he was a member of the Republican party and was widely known for his work on various campaigns. He had been a delegate to the conventions of both Senator Brooke and former President Nixon.

He is survived by his wife, the former Evelyn Hill; his step-son, William Carter of Naples, Florida; his sister, Mrs. Florence Larson, of Fairhaven; two brothers, Bernard Paulson, of Fairhaven and Frederick Poulsen, of Chino, California.

He was a member of the First United Baptist Church of Lowell. Active in Masonry, he held membership in William North Lodge, A.F. and A.M. of Lowell; as well as Mt. Horeb, Royal Arch Chapter and Aleppo Temple, Order of the Mystic Shrine, of Boston. He was also a member of the Father Norton Friendship Club." 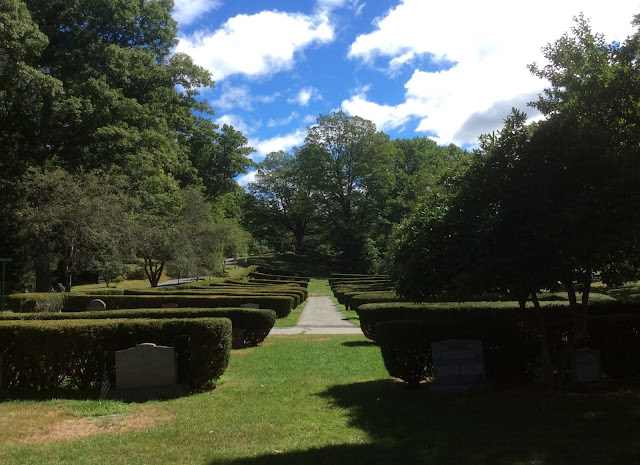 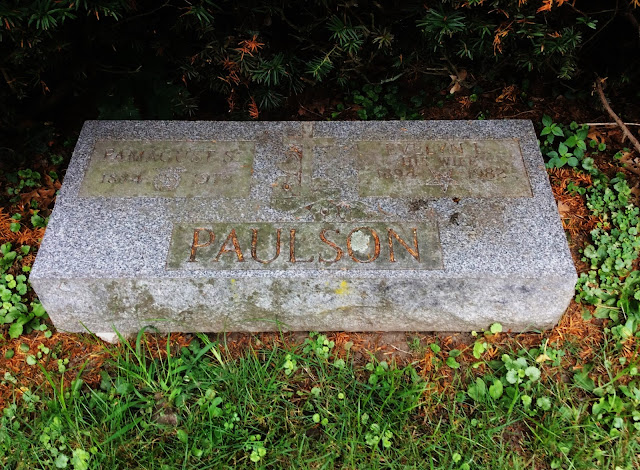 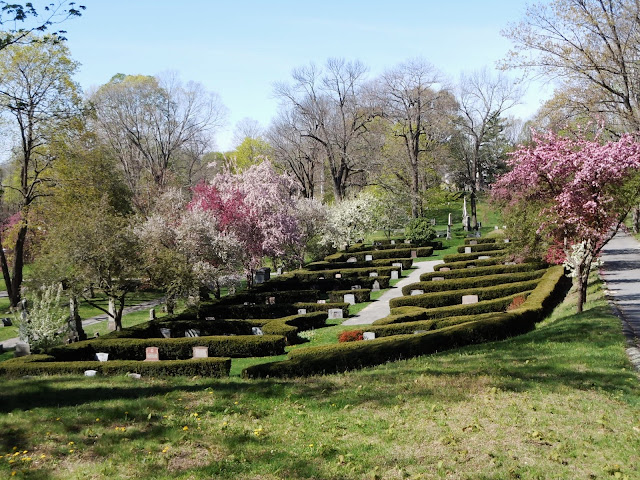 This area, called the Range, is the prettiest section in the
Lowell Cemetery.

I am Really Going Nuts with Russia

During the past month, there has been a large increase in my stats, and I'm not happy about it. I only wrote five posts in July and am happy with the response I received. The problem is with the Russians! They seem to be reading my posts or doing something else with my data. Let me explain. I haven't written a post in a week, yet my stats show 2180 hits came from Russia this week, vs. 700 from the United States. I can't figure out why, nor do I know what they are looking at. It makes me nervous and nuts.

The listing below is for the past 24 hours or so. The links are active, so you could read these articles, if you want to. The numbers reflect the hits. Now, I ask, why would 19 people be reading about my two-year old blog, or 14 people interested in seeing my 2nd great-grandfather age through photographs and pictures?

I'm still trying to decide what to do, but until then, I'll share what somebody out there is  interested in.

Labels: Blog
Email ThisBlogThis!Share to TwitterShare to FacebookShare to Pinterest