Killingworth, Connecticut, I Have More Ancestors from Here than Anywhere Else! 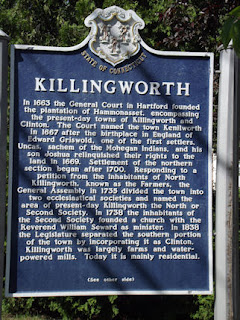 Killingworth, Connecticut has one of the largest concentration of my direct ancestors, and a custom report revealed that I had 34 direct line couples married there. I have 753 source citations from the Vital Records of Killingworth!

What is special about Killingworth? When I first began the hobby, I became familiar with the name; often misspelled Killingsworth, and confused with the other town, Killingly. My mother's DAR patriot, Asher Wright, died there, and my DAR patriot, Jonathan Kilborn was married there (I was happy to find a new patriot, so I didn't have to share hers.)

I was hooked on this town when I inquired about records, then soon received quite a packet from the Killingworth town hall. A employee made copies of selected original records for me. Soon I was planning a visit, and when I went, it became my first cemetery trip, (about 2.5 hours away).


Fortunately, there are many records for this area, and family genealogies as well. Almost every early family is related to somebody in the Hull, Kelsey or Steevens family. Knowing where your ancestors lived can help in doing research, and it helped me even solve a brick wall. There are three genealogies I constantly used:

Page 36 "The following 'Allotment of the several inhabitants of Hammonascitt' is from page 1 of the Town Records of Killingworth.


2.  Claypool, Edward and Azalea Clizbee, A Genealogy of the Descendants of William Kelsey, Vol. I, (Pub. Tuttle, Morehouse and Taylor Co., 1928).

Several bloggers have written about towns they have felt connected to. For me, it is Killingworth.  For some reason, I've always traveled to the town in early April, just before spring. So all my photos look like fall with huge ugly brown oak leaves on the cemetery grounds. I am hoping to go again, but in early May. When I looked at Google's images for Killingworth, there a few scrolled pages down, I couldn't believe my own picture, one being my flower logo, a click pulled my blog of December 11, 2010 for my Kelsey line, and then the logo for My Heritage Award had my Davis line post.  Both Kelsey and Davis were from Killingworth. You just don't know where your information is going to show up!

Page 7. "Ananias Turner and Andrew Ward moved into Killingworth as early as 1670. Robert Lane, from Derbyshire in England, and the ancestors of the Merrills and Rutty families were also early settlers. Robert Carter from Bristol in England became an inhabitant about 1700, and Ebenezer Hurd, from Waterbury in this state, around 1706. The Morgans in this town are from Groton, and the Hillyards from Stonington."

The settlement in North Killingworth began in 1716. The first settlers in this parish, were Isaac Kelsey Esq., Dea. Josiah Hull, Dea. Joseph Wilcos, Dea. Daniel Buel, John Wilcox, Joseph Griswold, Nathaniel Parmelee, Ebenezer Hull, Samuel Stevens, and Edward Rutty. These were all from the first parish in the town. Solomon Davis, Timothy Chittenden and Theophilus Redfield soon united with them;  but from what places they emigrated is not known. James Hill, David Blatchley and Bezaliel Bristol, moved into this place from Guilford about 1750.The Graves and Harris families are from Saybrook."

(Photo by Mary Frances Studzinski of Killingworth, used with her permission.)