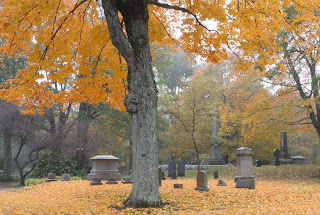 For my second year Blogiversary*, I had to take a special photo, shown on the left. It was taken about five miles from my house on a rainy, yet warm October 14th. It also serves as a reminder to me, to write about Garden Cemeteries.


Last year I wrote 302 posts, and this year 250. I'm trying to cut down on writing and spend more time on research. No brick walls have been solved, that's my biggest regret. But this doesn't mean I won't try to write interesting posts, I will try very hard.

One of the best things that happened this year was finally being able to see my grandparent's gravestone, a photo was taken by a cemetery employee. The cemetery is in Illinois (I live in Massachusetts).


I began a new series for Sunday posts, that being a listing of all the obituaries in the Lowell Sun newspaper for Lowell, Massachusetts. Usually I show just the name, where they were from and age. Two things I discovered, first, I receive a huge number of hits, and second, I found out that three of my classmates died last week, we were all the same age! After more than a month, none of the readers has asked me to send a copy of an obit, but I have them saved, ready to scan for their asking.


Two fun events happened recently. The New England GeneaBlogger's Bash was held in late August, and I met some bloggers there. Last week, I met top Genea-Blogger, Thomas MacEntee and several other bloggers in Boston.

In closing, I'll repeat what I wrote last year, "thank you to each of you who have followed me, left comments and / or encouraged me. Without you, I wouldn't have made it." Will I make it to my third, we will see.

* Blogiversary combines the words Blog and Anniversary.
Labels: Blogiversary, Blogs, Celebration, Me
Email ThisBlogThis!Share to TwitterShare to FacebookShare to Pinterest


The DODGE surname is another old Massachusetts family. Below are the first three generations of my line (in green). If you would like sources or want further information, please contact me.
Generation No. 1