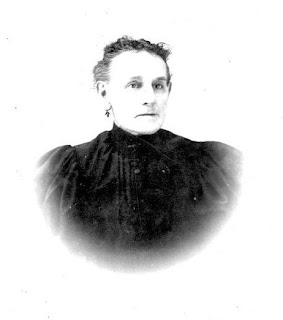 Wealthy was my first cousin 4x removed.
Photo and Obituary belong to Gary Hanna, and permission was granted for me to include in this post.

Wealthy M. Hanna, widow of John F. Hanna, formerly of Momence, Ill.,
but who has for the last three years resided with her sons, Herbert and Henry
Hanna, one mile east of Moscow, died early Tuesday morning, Oct., 6th.,
from decease of the heart and old age.

Deceased has been in poor health for about two years, but was not confined
to her bed until recently.

Mrs. Hanna, whose maiden name was Scramlin, was born on Aug. 13,
1833, in Canada. When but four years old she moved with her parents to
Battle Creek, Mich. In 1850 they moved to Kankakee Co., Ill., and settled upon a homestead near which now is the city of Momence.

In 1853 she was united in marriage to John F. Hanna, to which union was born six children Namely: Cother F., Henry S., Arther Eugene, Herbert E., Grant G., and Franklin A. Hanna, of whom but three survive her, Henry, Herbert and Frank Hanna of Moscow.

As a wife, she was ever kind and considerate, and a most devoted mother, always sacrificing for her loved ones.

She was self-denying, kind and patient which qualities attracted many friends, all, who knew her, will remember her bright smiling face.

She passed away with the light of love shining on her face, which showed she was at rest with God, her Maker.

The funeral services were held at the home of her son, Herbert E. Hanna one mile east of Moscow on Thursday Oct., 8th, at 10 o'clock and were conducted by the Rev. Koontz of the Methodist church. The remains were laid to rest in the Moscow cemetery.
Labels: Location: Illinois, Obituary, Photos, Surname: Schrambling / Scramlin, Wordless Wednesday
Email ThisBlogThis!Share to TwitterShare to FacebookShare to Pinterest

Finding the Will for Will Was Great, But Frozen to Death, Not So!

Two wonderful pieces of information provided the documentation I needed to tie-up my research for William "Will" Scramlin, my 2nd cousin 3x removed. Both of these resources were free.

I last found him in the 1900 census in Harmon, Roberts, South Dakota, then the trail ran cold. That was until I searched for Will Scramlin in FamilySearch.org. Their were seven hits for William Scramlin, so it didn't take long to go through the file, but one, the Saskatchewan, Probate Estate Files, 1887-1931 Weyburn 1918 had 32 pages of legal documents, including the will and probate records for him! Apparently, he and his family were living in Weyburn, Saskatchewan, Canada. It was pure luck that these documents were scanned and put online, I would never have found them, and why would I ever think Saskatchewan.

A few days later, while still researching him, more information came to light, when I used Google News and found the newspaper, The MorningLeader - Jan 28, 1918.  The headline was HALBRITE MAN FOUND FROZEN AT , 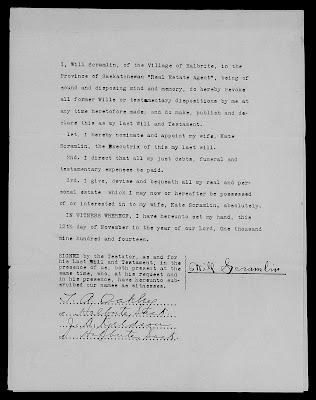 “Real Estate Agent”, being of
Sound and disposing mind and memory, do hereby revoke
All former Wills or testamentary dispositions by me at
Any time heretofore made; and do make, publish and de-
clare this as my last Will and Testament.

1st. I hereby nominate and appoint my wife, Kate
Scramlin, the Executrix of this my last will.

2nd. I direct that all my just debts, funeral and
Testamentary expenses be paid.

3rd. I give, devise and bequeath all my real and per-
Sonal estate which I may now or hereafter be possessed
Of or interested in to my wife, Kate Scramlin, absolutely.

IN WITNESS WHEREOF, I have hereunto set my hand, this
12th day of November in the year of our Lord, One thousand
Nine hundred and fourteen.

SIGNED by the Testator, as and for
His Last Will and Testament, in the
Presence of us, both present at the        Will Scramlin
Same time, who, at his request and
In his presence, have hereunto sub-
scribed our names as witnesses.

Was Well Known in Weyburn
District and Good
Colonizer

Jan. 26.—The
Body of William Scramlin, said to be
a wealthy land man of ,
was found frozen stiff near the city
hall today. His skull was fractured
and his face smeared with blood
Whether he was struck by some one
or fell against the  building on the icy
Sidewalk the police have been unable
To determine.

Scramlin and his wife came here
Thursday night to visit relatives and
bid farewell to their son who enlisted
In the aviation service. Scramlin was
Fifty years old. A wife and four chil-
dren survive. 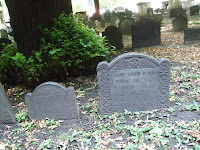 How long does it take FindAGrave to add a million grave records into their site?

By my calculation it is now taking just a little over 3 weeks. I base this on my visual viewing of their site, since I am on it almost every day. The weeks between December 7 and January 1 took a little bit longer to reach the million mark, due to holiday activities. I say by August 15th they will hit the 100,000,000 mark. What do you think?

In November, I wrote, Have You Looked Lately? a short piece about FindAGrave. For each new figure, I updated my blog to reflect the stats.

** The total is now 96 million grave records as of March 24, 2013!
Labels: Cemetery, FindAGrave
Email ThisBlogThis!Share to TwitterShare to FacebookShare to Pinterest 
State of ,
Genesee ’s Court,
To the Surrogate’s Court of the :

That the said deceased was at the time of making and publishing said LAST WILL AND TESTAMENT of sufficient age to enable him to make such will and at his decease, an inhabitant of the .

The petitioner further shows that the names of the heirs and next of kin of the said deceased, and their respective places of residence so far as your petitioner upon diligent inquiry he has been able to ascertain the same, are as follows, viz :

Your petitioner therefore prays that said will may be proved, and that a citation be issued out of and under the seal of this Court, to be directed to the proper persons, pursuant to The Statute in such case made and provided, requiring them and each of them, at such time and Place as shall be in the said citation mentioned, to appear and attend the probate of the said Last Will and Testament, and that such further or other proceedings in the premises shall be duly had as may be requisite to be the proving and recording of the said Last Will and Testament and the granting probate and Letters Testamentary thereof. And your petitioner will ever pray.

Dated this 3rd day of September in the year of our Lord one thousand nine hundred and seven
Charles R. Gould

The probate Proof of Service was filed at the Genesee County Surrogates Office on September 13, 1909, was obtained by my 5th cousin Claire who lives near Niagara Falls, NY. There were 8 legal documents in the packet, no copy of the original will found. Photo of cemetery stone also taken by cousin Claire.
---------
Amos was my first cousin 4x removed. 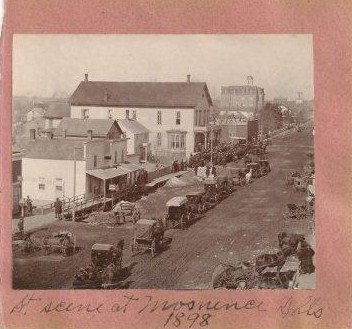 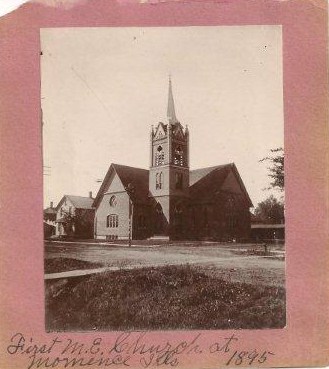 Photos used with permission, thanks to Gary Hanna, my recently discovered 5th cousin. He and I share the Scramlin / Scrambling line and he is currently working on the Hanna line. If anybody has Hanna in their tree from Illinois, please let me know.
Labels: Location: Illinois, Photos, Surname: Schrambling / Scramlin, Those Places Thursday
Email ThisBlogThis!Share to TwitterShare to FacebookShare to Pinterest

I am just learning about the wealth of genealogical information newspapers can provide. An ancestry subscription will often have articles with your ancestor's name, and I've always known about the Library of Congress (LOC.gov). However, recently there are two more sites to fill my newspaper hunger. They are:

1.  NewspaperArchive at  http://newspaperarchive.com/  Just yesterday I subscribed to the 3 month special for $19.95.

2. Google newspapers at  http://news.google.com/newspapers#V was written about today by Brenda Silvey on facebook. She posted the information on the facebook site, Technology for Genealogists, started by Susan Petersen. There are a combination of both free and fee papers. The nice thing with this site is, you can put in the surname, and most likely, you'll get a lot of hits. Since I'm currently working on the SCRAMLIN line, the first hit was about the man I'm currently working on, and I found out he froze to death. After finding that, I went through about 50 other articles.

Below, keeping with the Scramlin surname, here are two articles about distant relatives who did some murdering during their lifetime.

Henderson Directories and newspapers mostly for Manitoba,Sask. and Alberta.
http://peel.library.ualberta.ca/henderson.html﻿

You've All Heard of My New Cousin

Two years ago I visited the house of one of my distant cousins, she was my Sixth cousin, 5x removed. At that time, I didn't know there was a connection to me. As a matter of fact, I found out from a facebook friend, Janeen, who asked if she could use my cemetery photo because she was related. Janeen and I share so many ancestors, I would guess 15 maybe more and all from Connecticut. Thanks to Janeen, I saw I also share an ancestor of Harriet Beecher Stowe (see HERE). No wonder I was so excited to visit her house in Hartford, CT, see another one in Brunswick, ME and visit the cemetery where she and her husband were buried in MA. 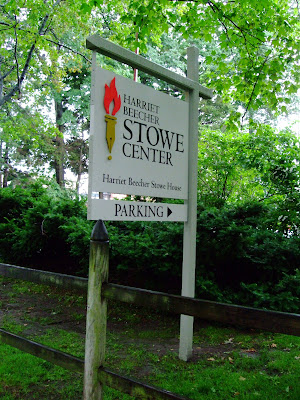 Harriet Beecher Stowe Center
While on a tour of the house, I asked where she was buried. Was quite surprised to learn that she was buried just a few towns away from me. The following day, we went to the cemetery, then two days later, while on a trip to Maine, my husband remembered where she lived in Brunswick, Maine, so of course we went there. That house looks unoccupied, and in dire need of repairs. 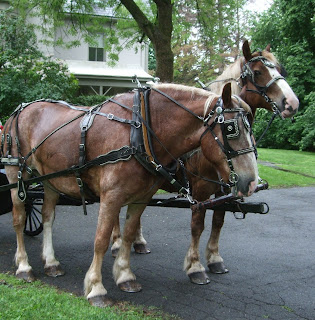 I was there the day of the 200th Birthday Celebration for Harriet Beecher Stowe. Horse rides, music and entertainment as well as free cake were available to all. 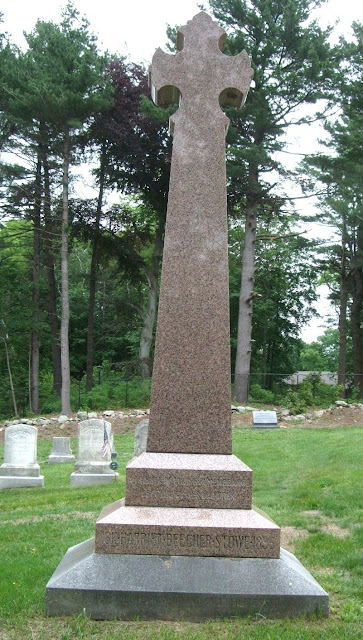 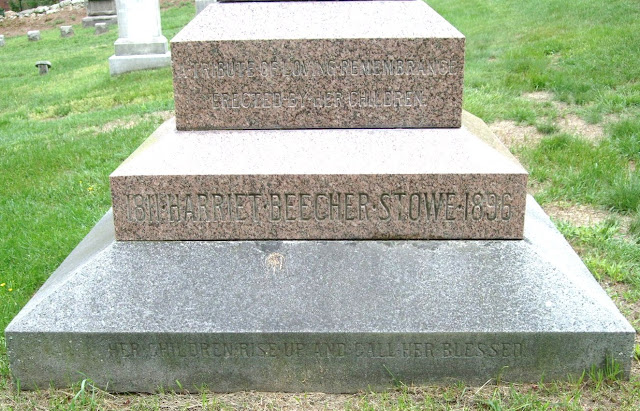 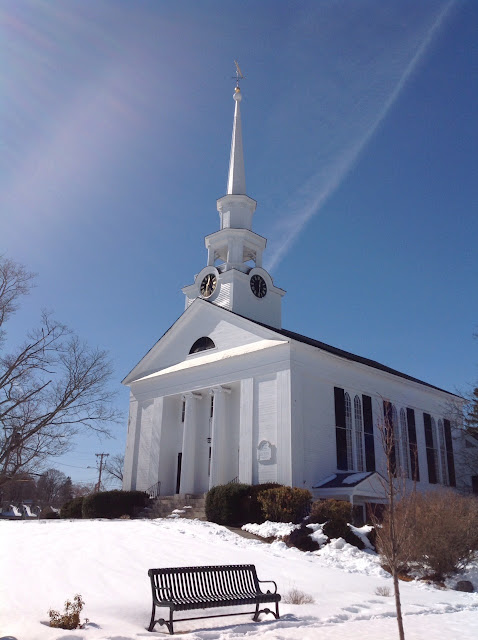 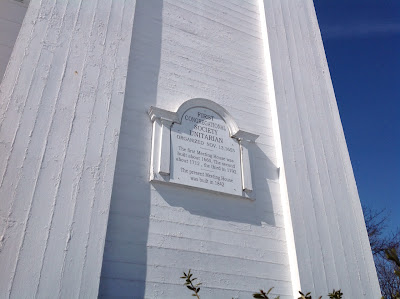 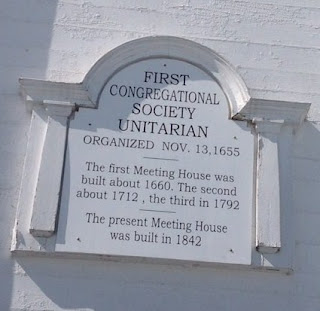 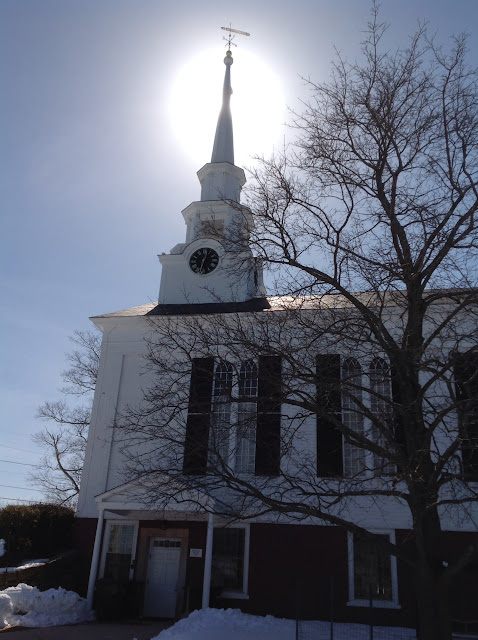 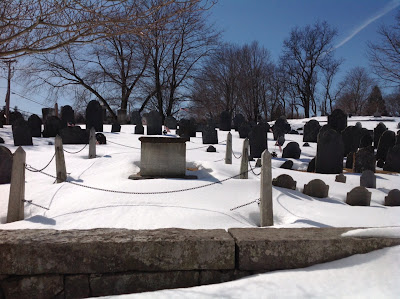 1655 Cemetery behind the Church. 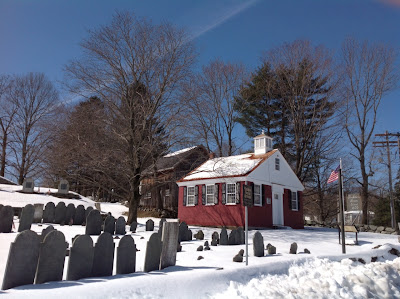 I'm not sure how many people have done what I did, but after all my years of doing genealogy, it's time to right a wrong. The surname written about in my post of October 2009, called, "My Scrambled Eggs" is about my Scrambling line that is spelled many different ways, including Scramlin, Schramblin, Schrambling and so forth. Even if there was a source for Scramlin, I would enter information under Scrambling. Recently, I've noticed somebody searching in my site for Scramlin, only to find I just had two brief mentions of the name. As you can see below, after I spent almost a week of correcting, researching and entering new information, I have a lot of Scramlins. Henry William Scramlin, first name in Generation #1, was my 3rd great-granduncle, and sometime in his father's life, the spelling changed for them, but not the entire family.
Note: It's a long list, but I wanted this line to kept together.