Positive vs. Negative and the Drouin Collection

Two different sources, two different images. Which version do you like, the negative or the positive?  The first record was located 12 years ago at a library in Boston. The microfilm reel was labeled "Quebec National Archives Microfilm #124.4" This means the records were in the 124 series, and this was part 4, I think there are 14 parts.
The second example is from the "Quebec Vital and Church Records (Drouin Collection), 1621-1967" available through Ancestry.com.  When these became available several years ago, researchers were thrilled because that meant no more ordering LDS records or manually going image by image as I did.
The two records below are exactly the same, one positive and the other negative. Recently while at the New England Historic and Genealogical Library (NEHGS) I had to ask an employee the difference between the two. All I knew was, I could change the option from a button on the machine. She said the first one is a negative image (white with black background), originally done as a positive. If you wish more information about the meaning between, please see below.
The second image is from Ancestry.com and that is how most records appear, as a positive. Sometimes it is easier to read it with a black background, you have to decide, if you have the option.
Now, while on this subject, I have gone round in circles with several people in the past, telling them I already had the records and they were not called the Drouin Collection. The images below are the exact same but called different things. I have always sourced my Canadian records as "Archives National de Quebec Parish Register," then the series and roll number, there is no mention of Drouin on the boxes or on the film.
Ancestry states: "Quebec Notarial Records (Drouin Collection), 1647-1942
Until the late 1900s, church registers in Quebec served as civil and vital records in that province. Throughout the years a second copy of church records, from all denominations, was sent annually to the appropriate courthouse. During the 1940s the vital record collections in courthouses throughout Quebec were filmed by the Institut Généalogique Drouin.* The filming of vital records continued for some areas up through the 1960s. Consequently, this filmed set of records became known as the Drouin Collection. The majority of the records in this database cover the time period 1621-1947, as most of the filming was done in the 1940s. The records that were filmed up through the 1960s are also included in this database, although they are very few in number. These records that were filmed later cover the years 1948-1967. Names from all years have now been indexed and can be searched on using the search box above." 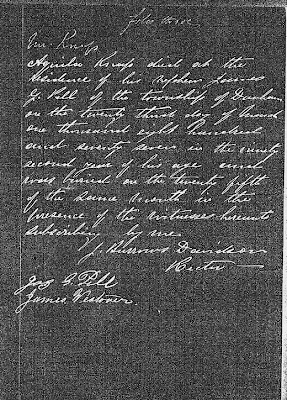 Above is from a roll of film, labeled "Archives National de Quebec Parish Register" 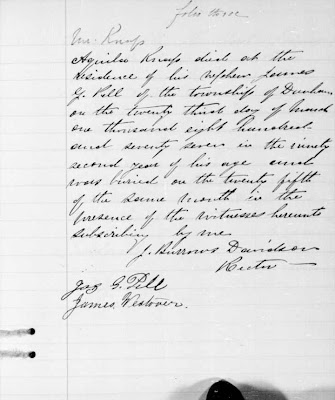 Ancestry's image (you need to be a subscriber)
"Quebec Vital and Church Records (Drouin Collection), 1621-1967" 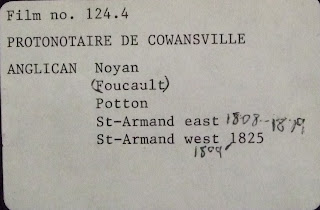 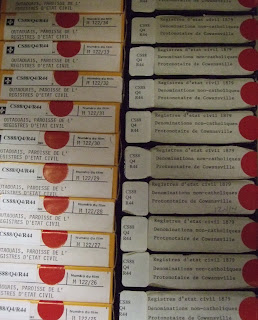 Above photos taken at NEHGS.