"I OFTEN THINK IT MORE BLESSED TO DIE ON THE BATTLEFIELD FOR ONES COUNTRY, THAN TO LIVE LONG YEARS IN CIVIL LIFE."
FROM CEMETERY STONE OF SOLON A. PERKINS.
BURIED LOWELL CEMETERY, LOWELL, MASSACHUSETTS 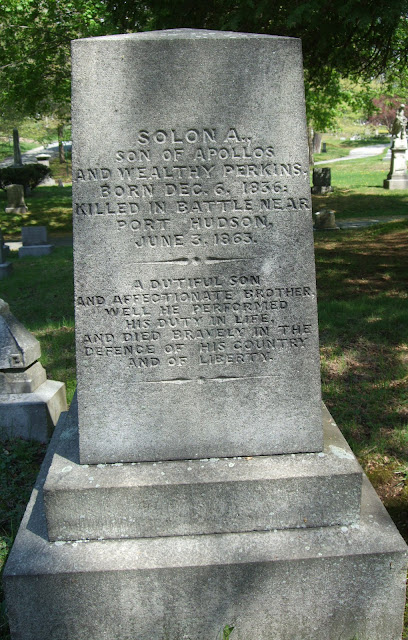 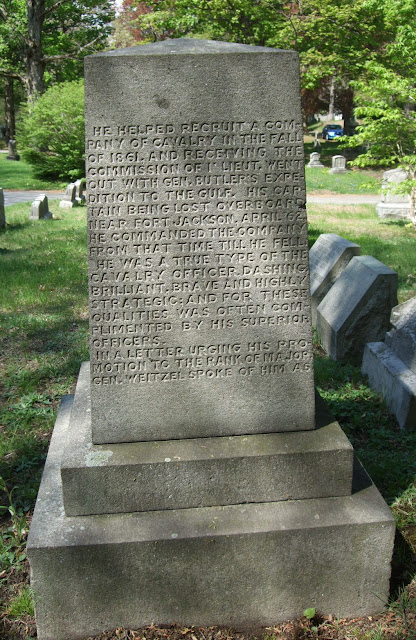 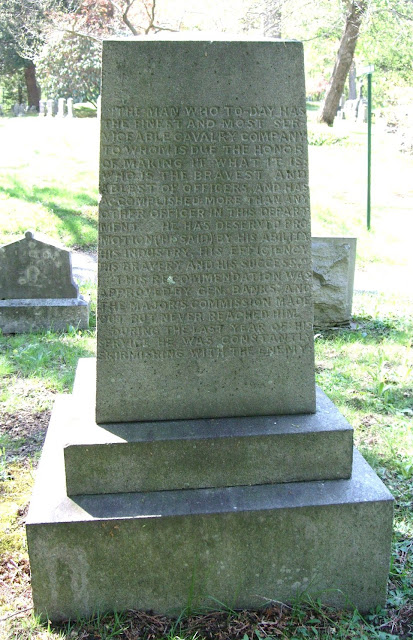 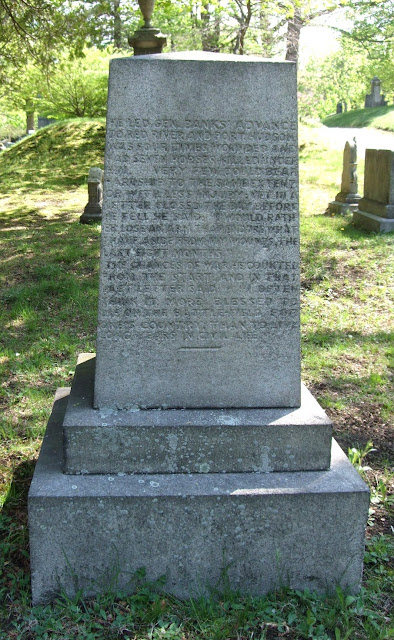 (Front) SOLONA A., SON OF APOLLOS AN D WEALTHY PERKINS, BORN DEC. 6, 1836, KILLED IN BATTLE NEAR PORT HUDSON, JUNE 3, 1863.
A DUTIFUL SON AND AFFECTIONATE BROTHER. WELL HE PERFORMED HIS DUTY IN LIFE, AND DIED BRAVELY IN THE DEFENCE [sic] OF HIS COUNTRY AND OF LIBERTY.


(2nd side) HE HELPED RECRUIT A COMPANY OF CAVALRY IN THE FALL OF 1861 AND RECEIVING THE COMMISSION OF I' LIEUT. WENT OUT WITH GEN. BUTLERS EXPEDITION TO THE GULF. HIS CAPTAIN BEING LOST OVERBOARD NEAR FORT JACKSON APRIL '62, HE COMMANDED THE COMPANY FROM THAT TIME TILL HE FELL. HE WAS A TRUE TYPE OF THE CAVALRY OFFICER, DASHING, BRILLIANT, BRAVE AND HIGHLY STRATEGIC AND FOR THESE QUALITIES WAS OFTEN COMPLIMENTED BY HIS SUPERIOR OFFICERS. IN A LETTER URGING HIS PROMOTION TO THE RANK OF MAJOR. GEN. WEITZEL SPOKE OF HIM AS;

(Back) "THE MAN WHO TO-DAY HAS THE FINEST AND MOST SERVICEABLE CAVALRY COMPANY TO WHOM IS DUE THE HONOR OF MAKING IT WHAT IT IS. WHO IS THE BRAVEST AND ABLEST OF OFFICERS, AND HAS ACCOMPLISHED MORE THAN ANY OFFICER IN THIS DEPARTMENT. HE HAD DESERVED PROMOTION (HE SAID) BY HIS ABILITY, HIS INDUSTRY, HIS EFFICIENCY, HIS BRAVERY AND HIS SUCCESS." THIS RECOMMENDATION WAS APPROVED BY GEN. BANKS, AND THE MAJORS COMMISSION MADE OUT BUT NEVER REACHED HIM. DURING THE LAST YEAR OF HIS SERVICE HE WAS CONSTANTLY SKIRMISHING WITH THE ENEMY:

(4th side) HE LED GEN. BANKS' ADVANCE TO RED RIVER AND PORT HUDSON WAS FOUR TIMES WOUNDED AND HAD SEVEN HORSES KILLED UNDER HIM. VERY FEW COULD BEAR HARDSHIP TO THE SAME EXTENT OR WITH LESS INJURY: YET IN A LETTER CLOSED THE DAY BEFORE HE FELL, HE SAID, "I WOULD RATHER LOSE AN ARM THAN ENDURE WHAT I HAVE ASIDE FROM MY WOUNDS, THE LAST EIGHT MONTHS."
THE CHANGES OF WAR HE COUNTED FROM THE START AND IN THAT LAST LETTER HE SAID, "I OFTEN THINK IT MORE BLESSED TO DIE ON THE BATTLEFIELD FOR ONES COUNTRY, THAN TO LIVE LONG YEARS IN CIVIL LIFE." 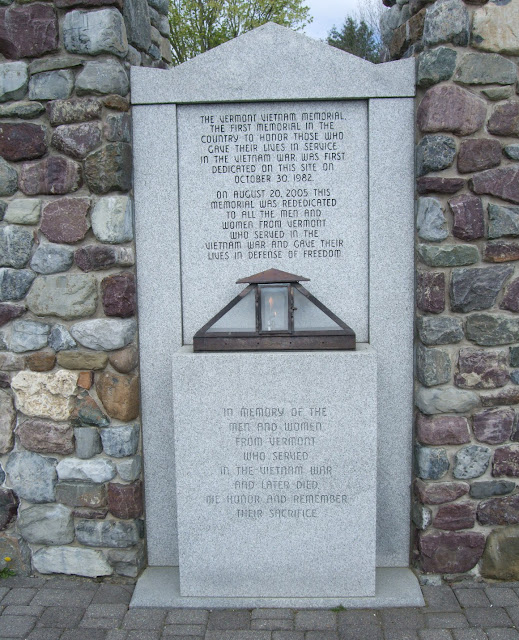 THE VERMONT VIETNAM MEMORIAL
THE FIRST MEMORIAL IN THE
COUNTRY TO HONOR THOSE WHO
GAVE THEIR LIVES IN SERVICE
IN THE VIETNAM WAR WAS FIRST
DEDICATED ON THIS SITE ON
OCTOBER 30, 1982.
IN MEMORY OF THE
MEN AND WOMEN
FROM VERMONT
WHO SERVED
IN THE VIETNAM WAR
AND LATER DIED.
WE HONOR AND REMEMBER
THEIR SACRIFICE. 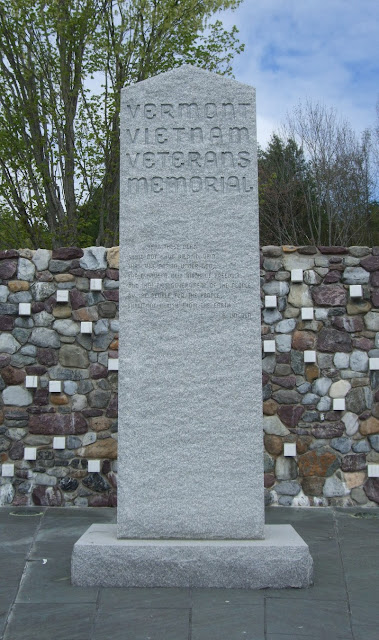 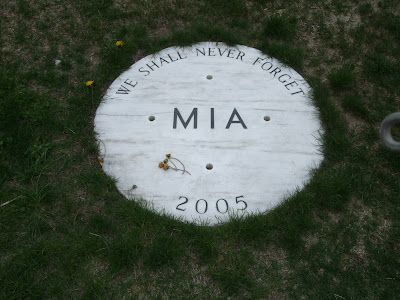 WE SHALL NEVER FORGET
MIA
2005


The memorial is located at the new Sharon, Vermont rest area.

"What we believe to be the first state sanctioned Vietnam Veterans Memorial in the nation was dedicated at 10:30 AM on October 30, 1982 at the northbound rest area on interstate 89, the Vietnam Veterans Memorial highway, in Sharon, Vermont. Since it dedication, an all night vigil has been held at the memorial on memorial day eve every year since.
This site for the memorial was chosen for several reasons. Interstate 89 was named the vietnam veterans memorial highway because the summer scenery closely resembles that of highway one in the central highlands of Vietnam. The site for the memorial was selected to be along the highway as a joint symbol of recognition of the highway's name and familiarity to highway one in Vietnam. interstate 89 was the highway taken by draft evaders as the most direct route into Canada and so stands as the "road less traveled" by Vietnam veterans. The location of the memorial is closest to the 138 mile marker from the Canadian border, symbolizing the 138 men whose names appear on the Vermont Granite." (Taken from link above.)
Labels: Location: Vermont
Email ThisBlogThis!Share to TwitterShare to FacebookShare to Pinterest