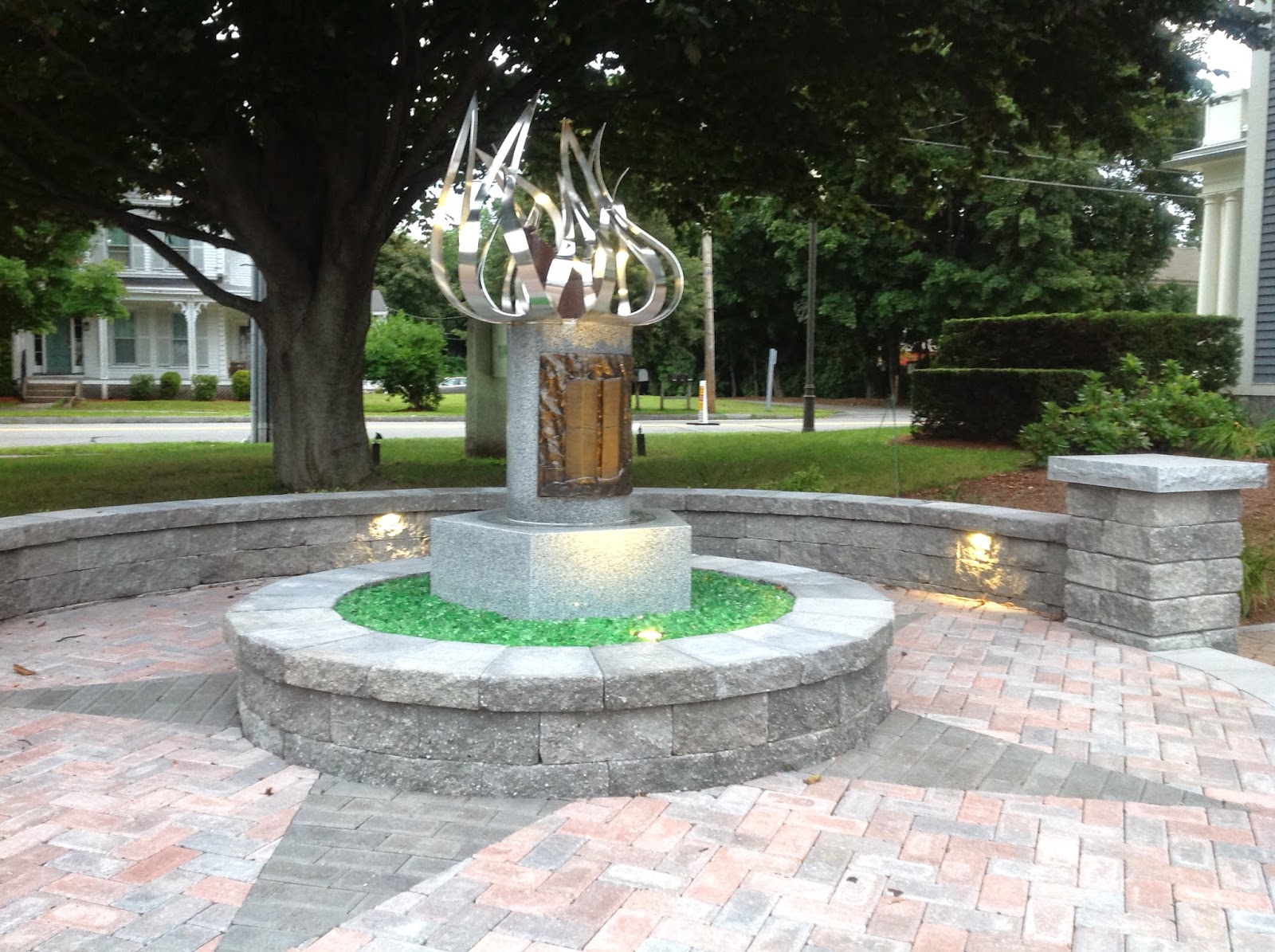 In February, I received the following message: "I wanted to let you know there is a new 9-11 monument in Westford you should see if you ever swing through the town. It is located in the area in between the Town Hall and the Fire Station in the Common area of town. I was able to go and see it dedicated and it is beautiful.  It has green sea glass that glows from underneath at night too. Check out the facebook page and pictures on it."  Naturally, I had to go and see it. My first visit was on April 19th, but I realized it should be seen at night, as you will see below. This is indeed a treasure of a Monument, and as many times I look at these photos, I get quite emotional. I believe you will too.

I went just before dark recently, and had the pleasure of chatting with a fireman who knew a lot about this memorial. He shared a few things with me, first telling me that Westford firefighter David Christiana, a sculptor, created the 9-11 memorial. The granite and green glass came from Pennsylvania and represents the field where Flight 93 crashed on the field, the middle base is in the shape of the octagon represents the Pentagon and the bronze work is beautifully engraved with an image of the Twin Towers and names of all 92 Massachusetts heroes who died that day. The caldron holds some metal from one of the collapsed Twin Towers. 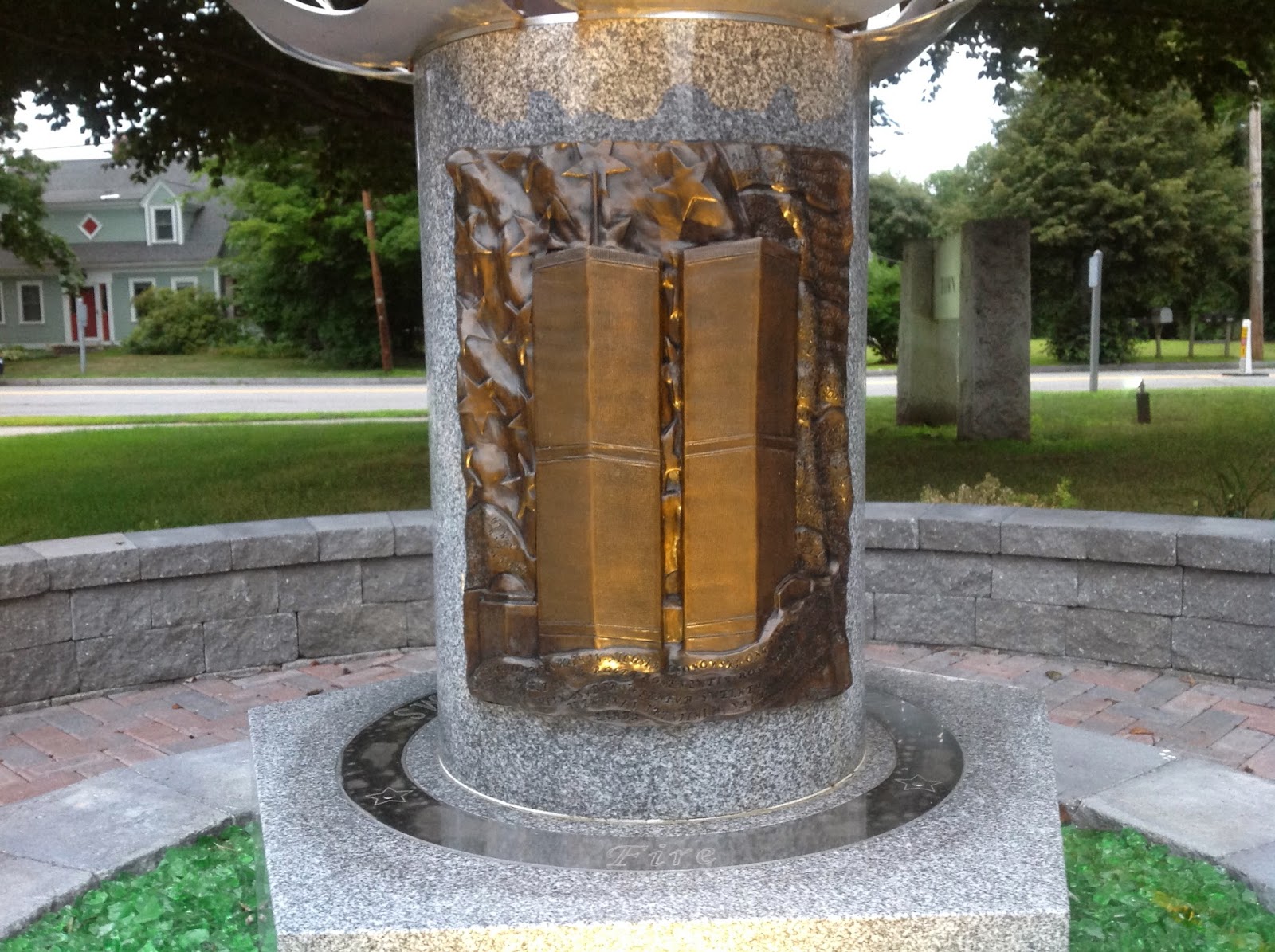 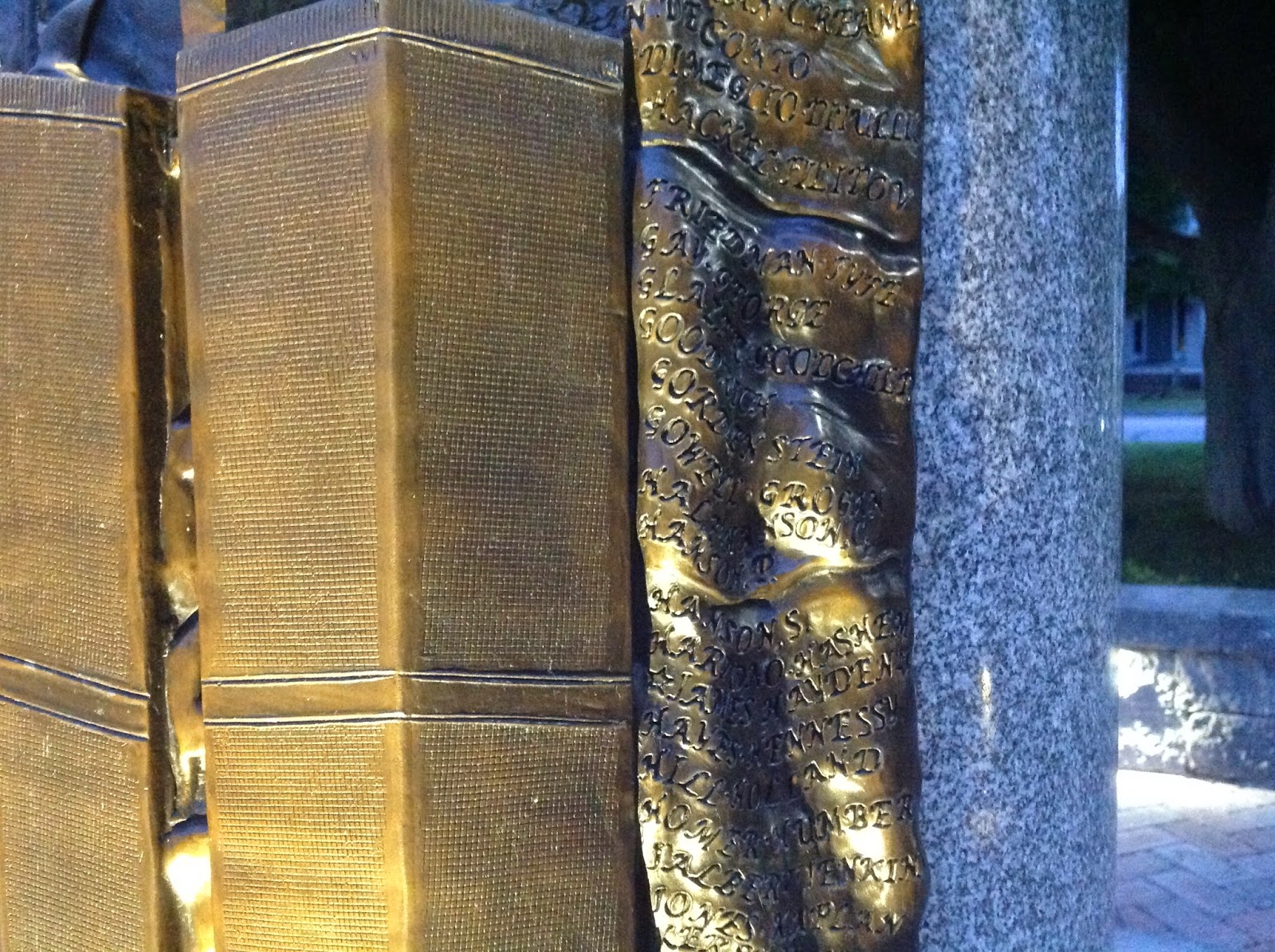 92 names engraved on the ribbon, surrounding the Towers. 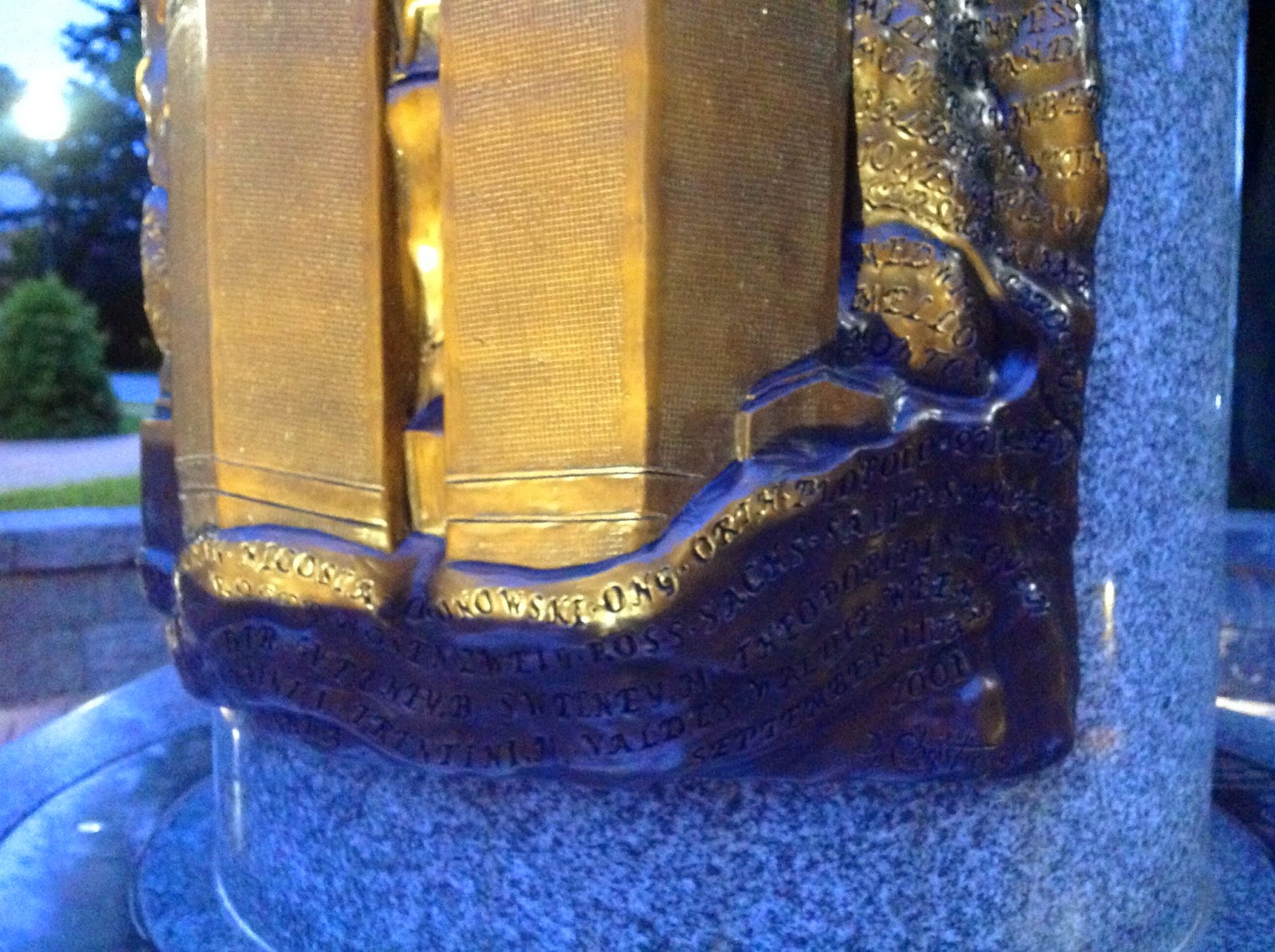 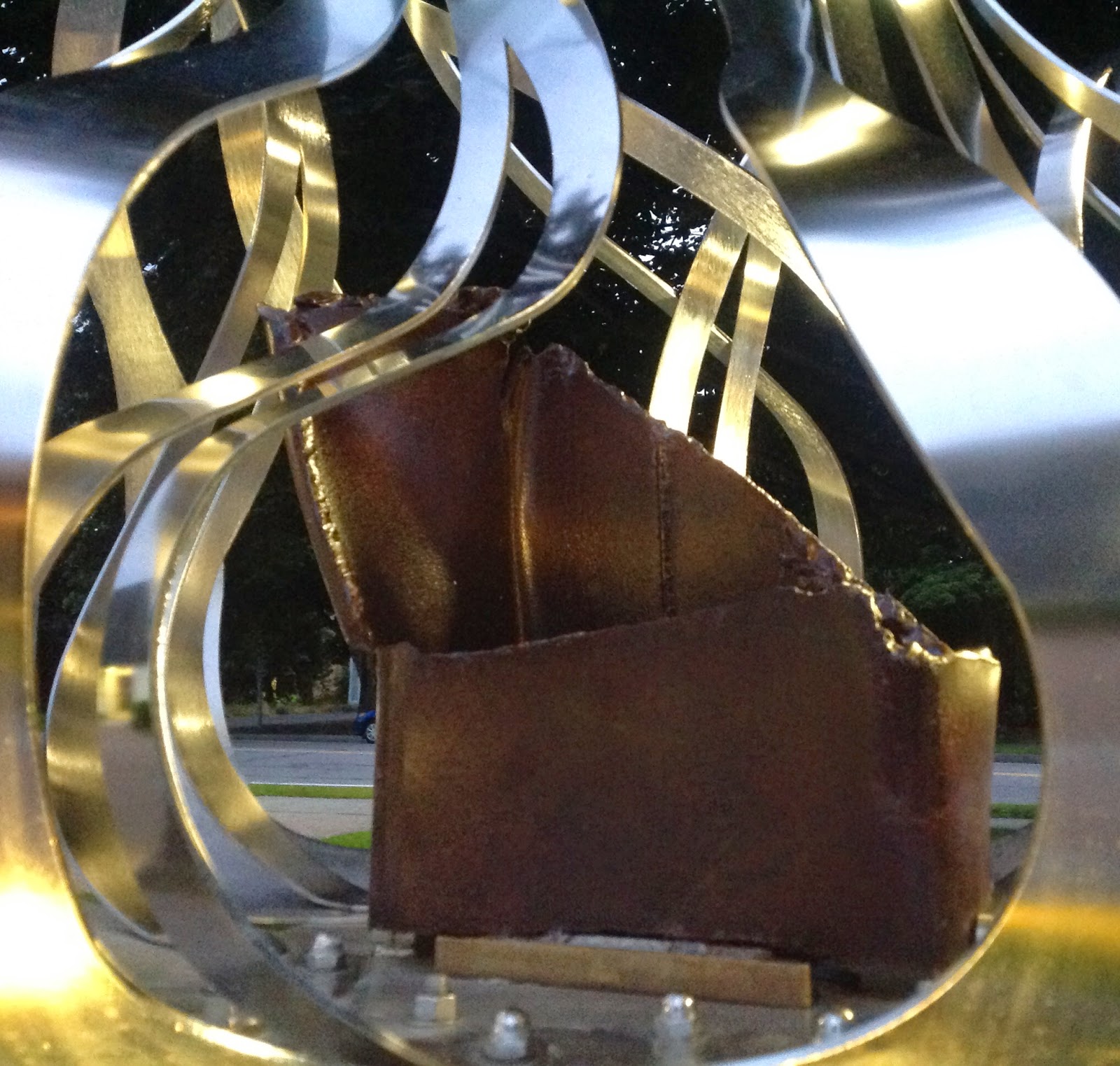 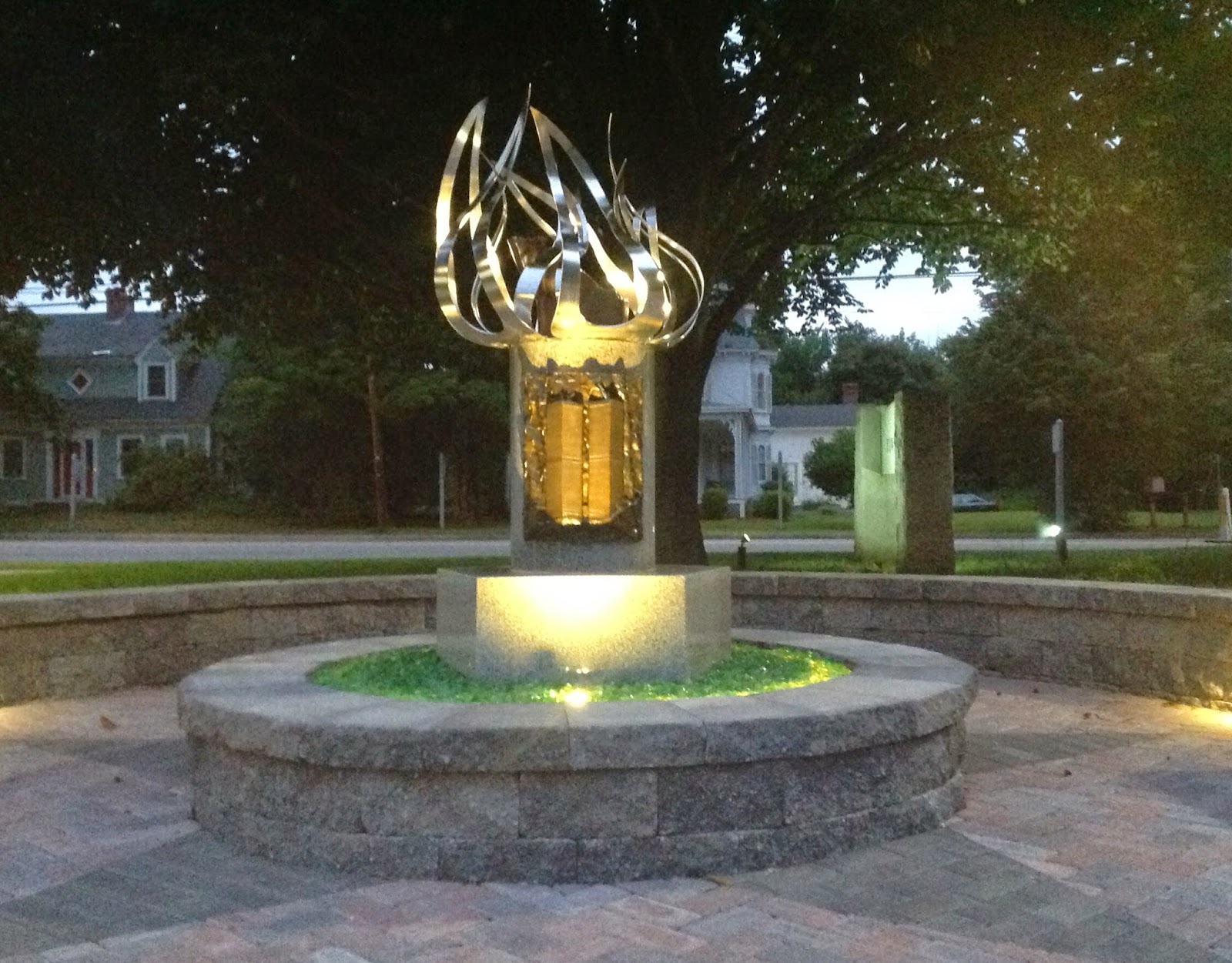 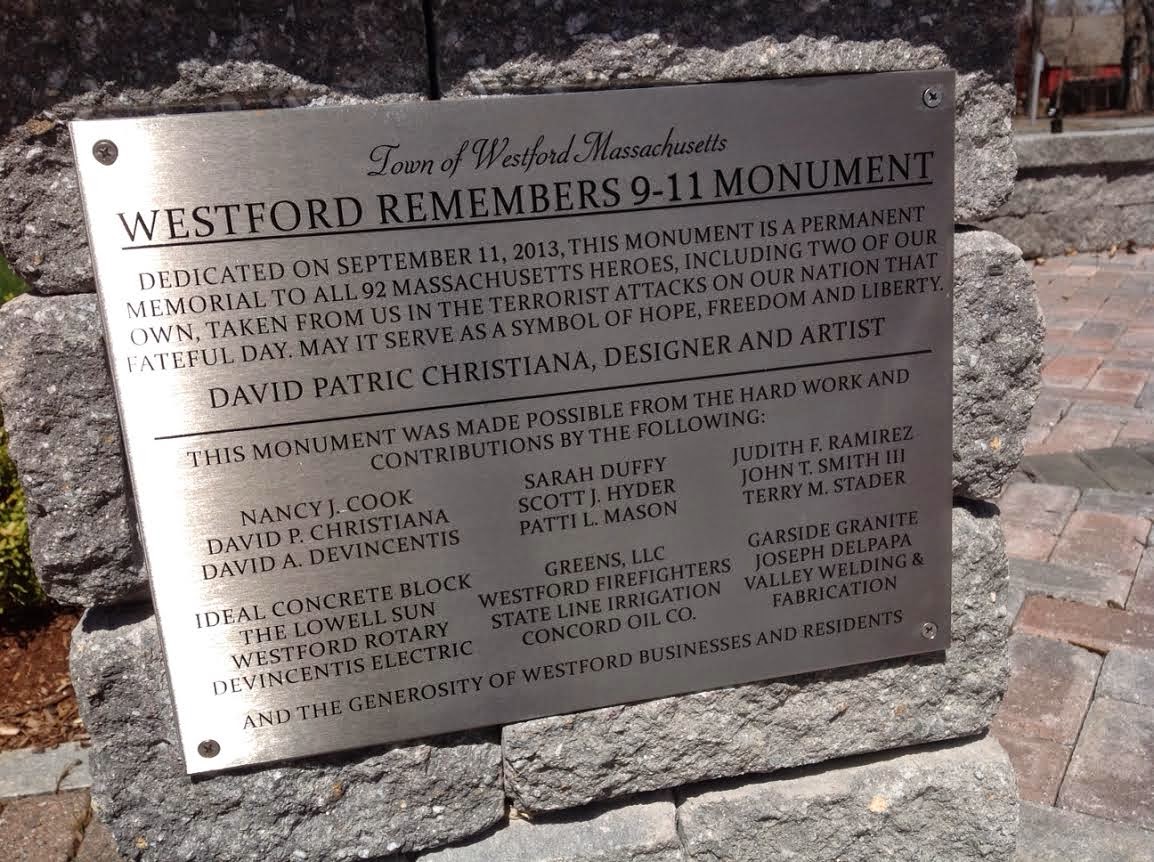 Dedicated on September 11, 2013, this monument is a permanent Memorial to all 92 Massachusetts heroes, including two of our own, taken from us in the terrorist attacks on our nation that fateful day. May it serve as a symbol of Hope, Freedom and Liberty. 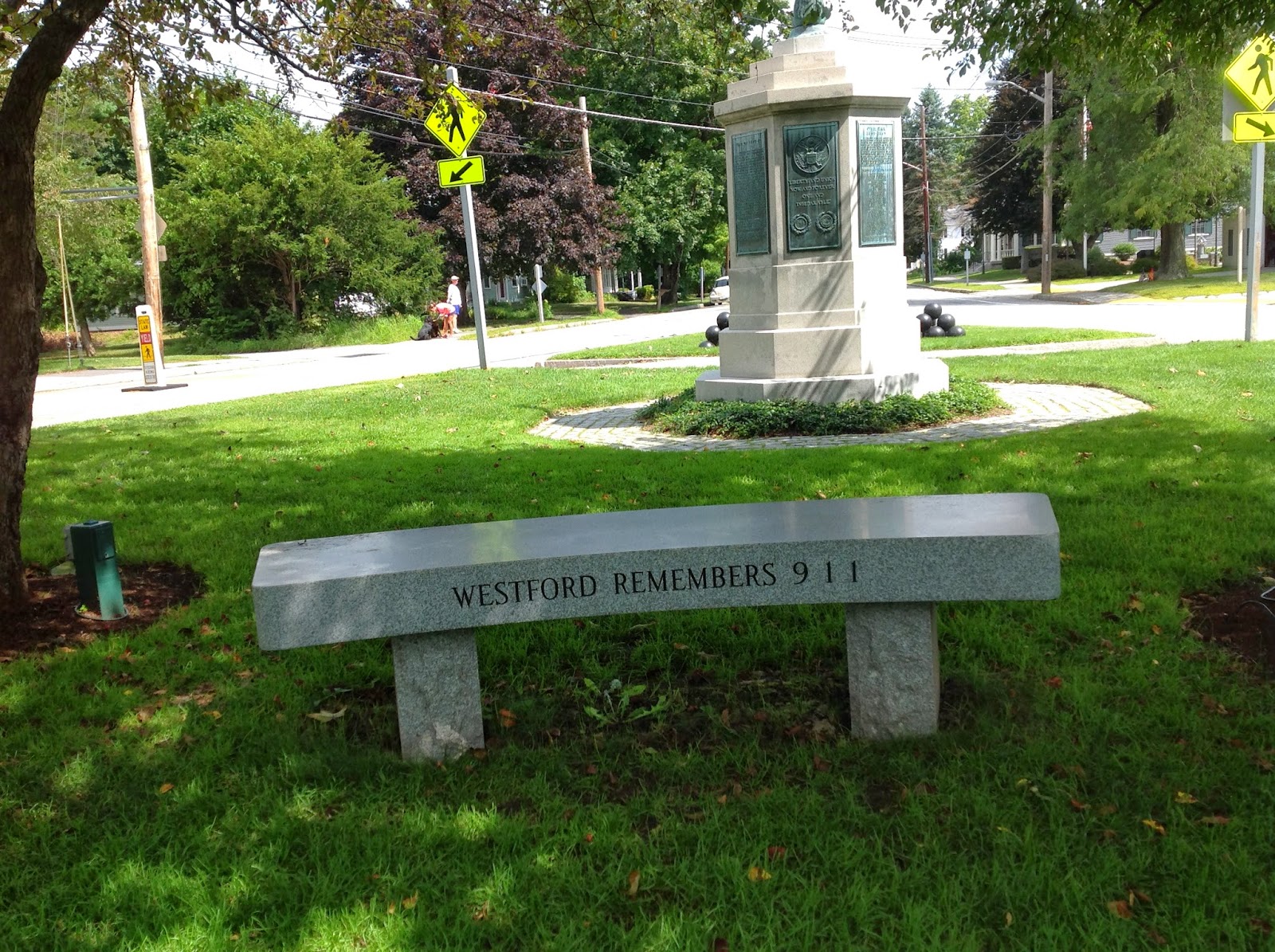 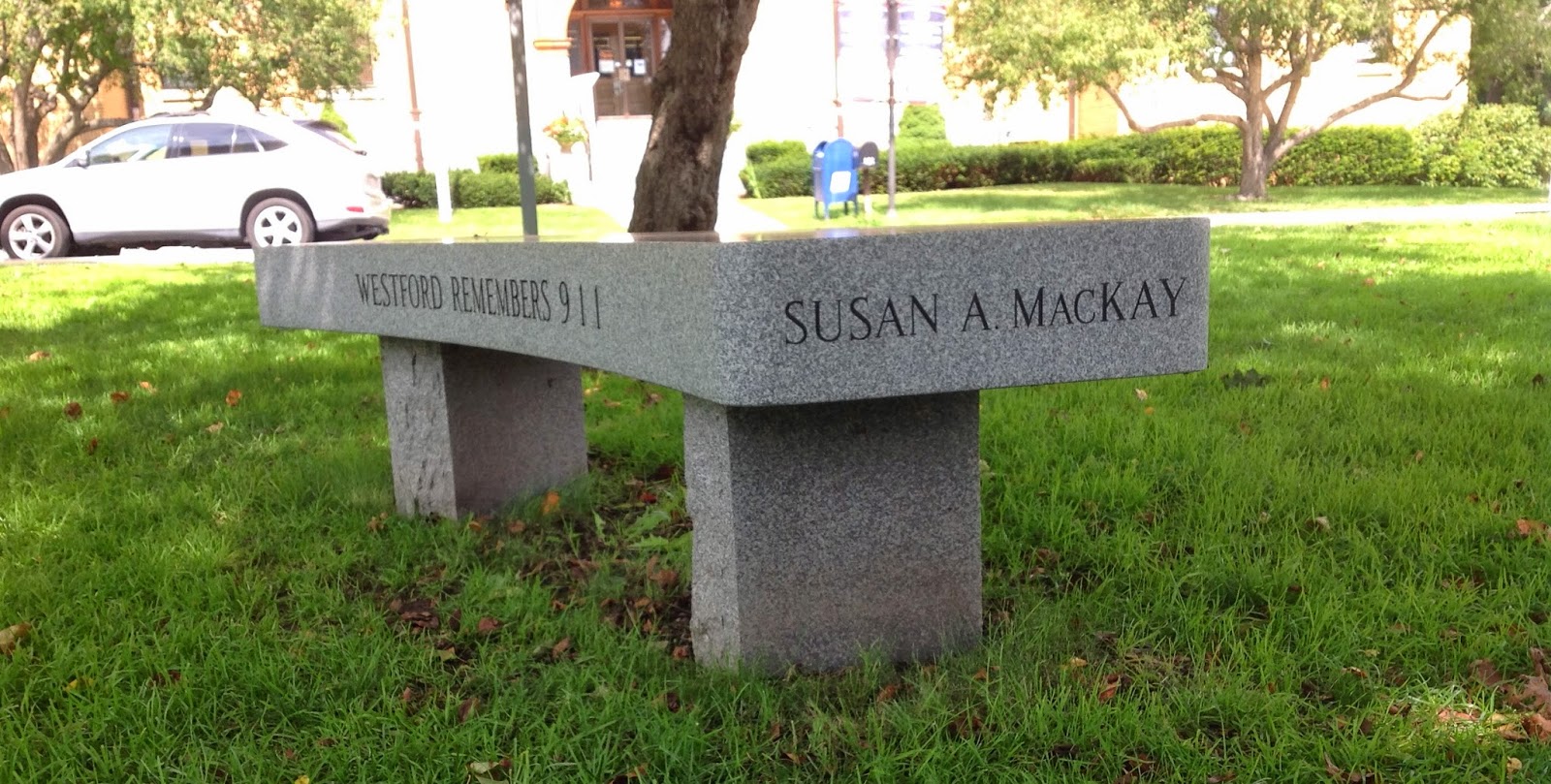 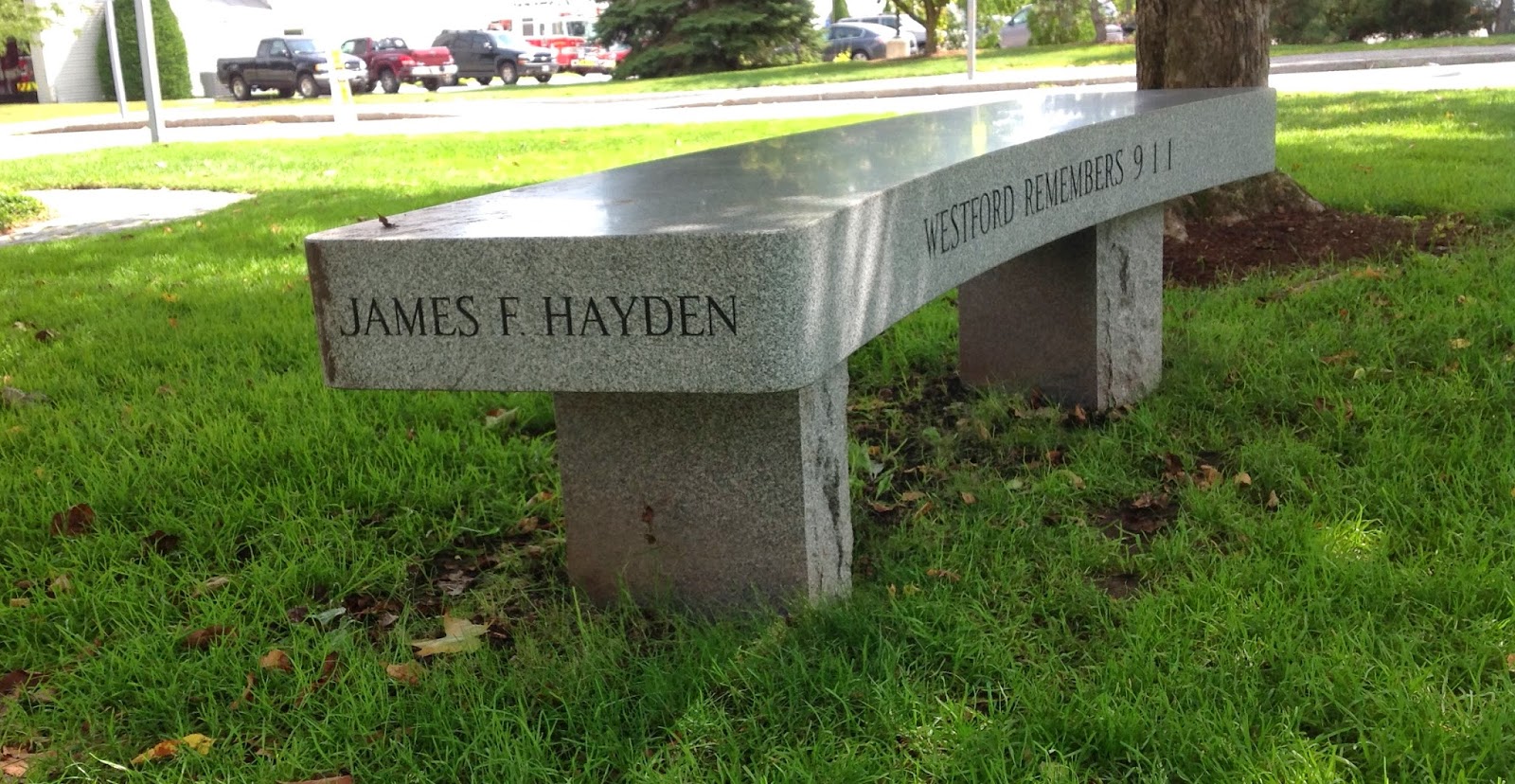 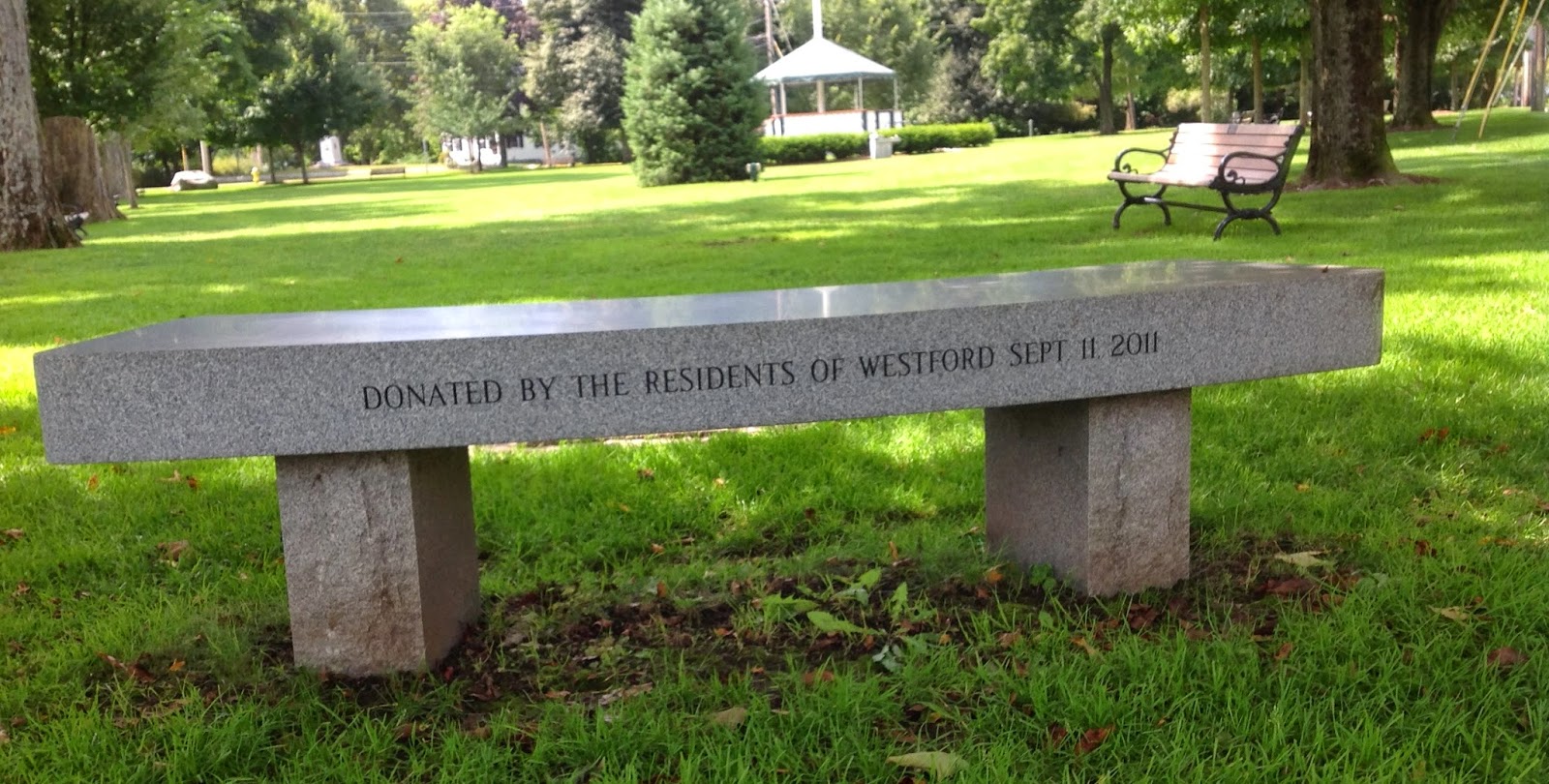 Donated by the Residents of Westford  Sept. 11, 2011
Labels: Location: Massachusetts, Memorial 9/11
Email ThisBlogThis!Share to TwitterShare to FacebookShare to Pinterest 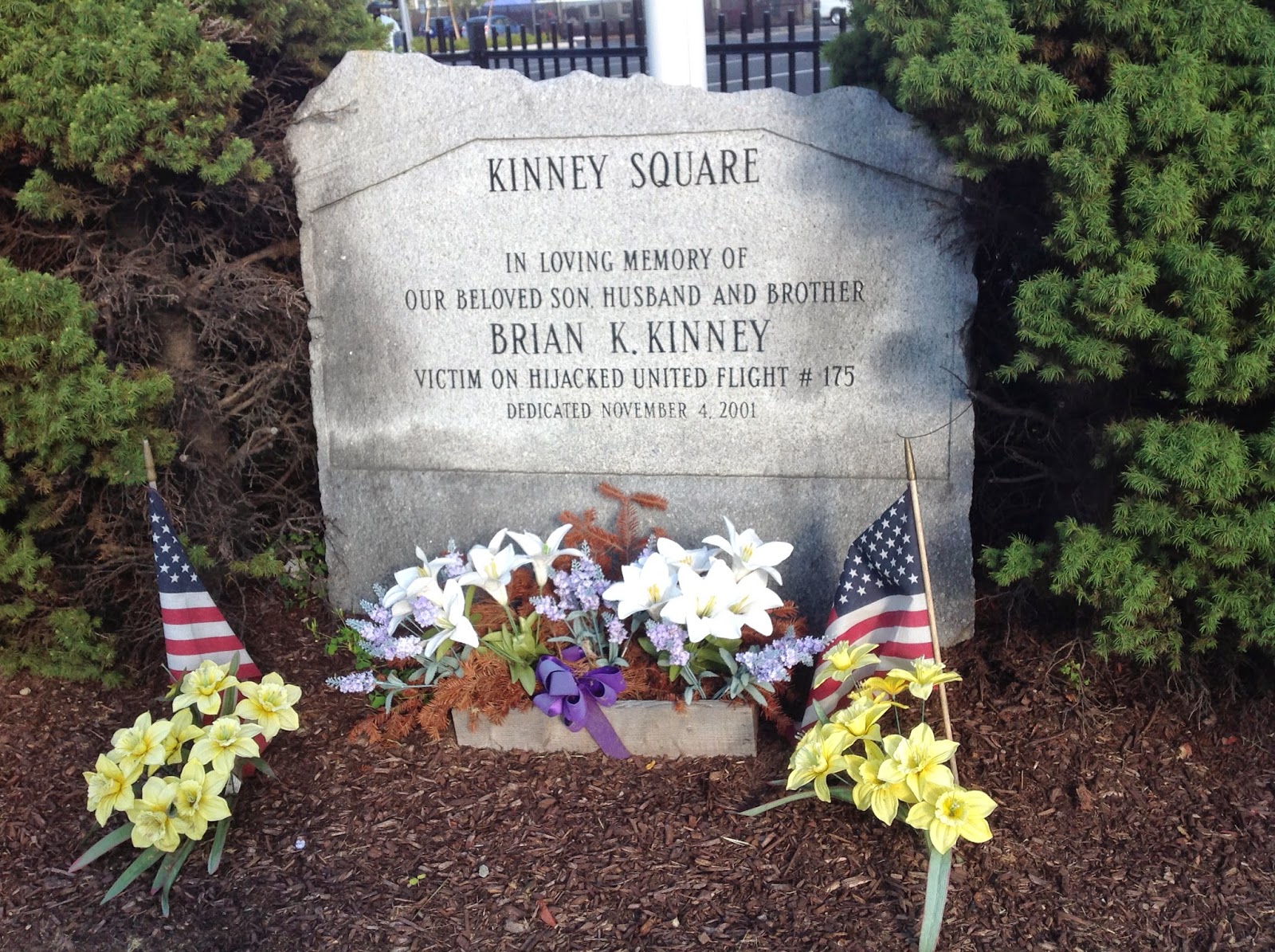 IN LOVING MEMORY OF
OUR BELOVED SON, HUSBAND AND BROTHER
BRIAN K. KINNEY 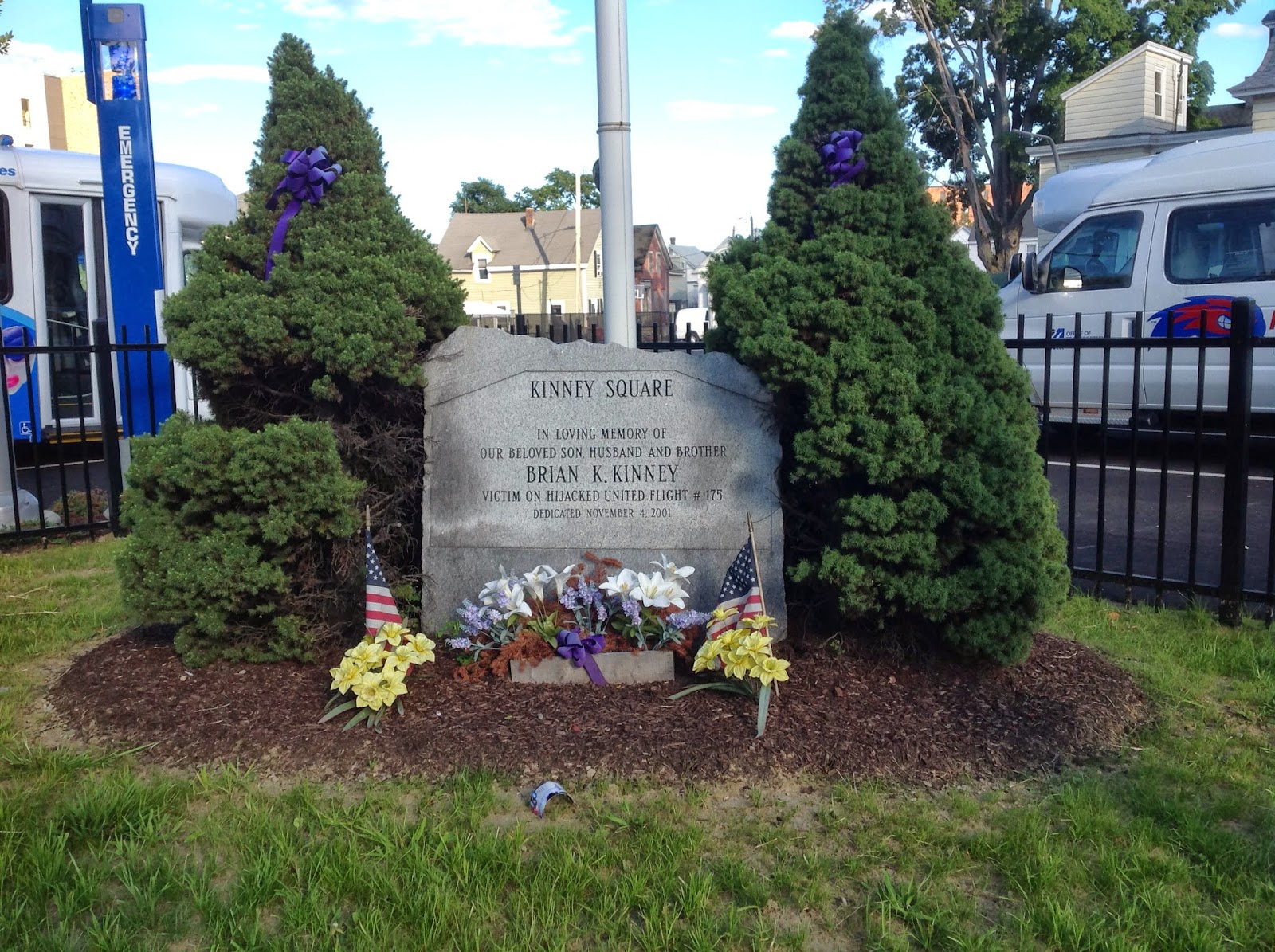 This memorial was inaccessible for quite a few years, while construction for new additions to the University of Massachusetts Lowell occurred. Behind the memorial used to be a gas station, but is now a parking lot for college buses. It is my understanding that Brian worked part-time at the gas station. He lived a block away from me, but I didn't know it until after 9-11. A memorial flowering tree was planted in the front yard, and there is a small marker there.

As a genealogist, I just got a little too curious, and googled his name. Found the following information, there are two write-ups about this remarkable person:

As a kid, Brian Kinney pumped gas at his family's Texaco station in Lowell, Mass., but even after college, when he put on a suit and started to work at PricewaterhouseCoopers in Boston, he spent Saturdays in his greasy old clothes, working alongside his dad. Mr. Kinney was grateful to his father for putting him through school, and he also loved catching up with customers' news. That was Mr. Kinney: equally comfortable in a white collar or blue one; tireless in his capacity for work; a friendly, enthusiastic fellow who asked "How are you?" before "Fill it up?" because he really wanted to know.

Decades earlier, Alison Hardy's father had worked at Kinney's. When she was 14, her father said she could cash her paychecks there. Brian wasn't yet allowed to handle money, but his father made an exception for Alison, so Brian had an excuse to talk with her when she came by. They married in 1998, settled in Lowell, visited their families weekly, planned to start their own.

At 28, the engaging, industrious Mr. Kinney had risen from intern to manager at Pricewaterhouse. He could have taken care of that California client by phone. But on Sept. 11, Mr. Kinney boarded United Airlines Flight 175 because he wanted to shake the client's hand and see how he really was doing.
Profile published in THE NEW YORK TIMES on April 28, 2002.

I have never heard of the National September 11 Memorial Find-A-Grave site.
Brian is buried there.
Labels: Location: Lowell Massachusetts, Memorial 9/11
Email ThisBlogThis!Share to TwitterShare to FacebookShare to Pinterest