The below listed names were taken from The Lowell Sun newspaper's obituary section. The names are often printed on two days, I am only listing them once.

When you see the copy and condition of the document I received about nine years ago (see below), you might wonder how anybody could transcribe it. The other day I found it typed up at a FindAGrave site, submitted by an old friend from about seven years ago. I immediately wrote Leanne and asked if I could use it for my blog. She gave her okay, then realized, she didn't do it, but it was me. Well, I don't remember...do we do things so quickly, and promptly forget? I'm giving both of us credit.

The death of Joseph McElroy at the home of his daughter Mrs. J.F. Schramling, in this city, Monday morning, marks the passing of 's oldest pioneer; for such Mr. McElroy undoubtedly was having come to Sabula in 1837, the year that our little city was laid out in town lots. The other sturdy pioneers who braved the wilds of virgin at that early date or within daresay five years of that time have all passed into the better world.

Joseph McElroy was born on a farm two miles from the city of , Pa, on September 2, 1815, and at the time of his death was 90 years, 5 months and 17 days old. He was a son of Hugh and Margaret () McElroy, natives of county, , and his father served as a soldier in the war of 1812. He participated in several active engagements and was wounded in the battle of Lundy's Lane, a ball passing through his liver. Notwithstanding this fact he recovered and lived to the advanced age of seventy-three years. To him and his excellent wife were born thirteen children, of whom the subject of our sketch was the last to pass away, and he was the eldest of the family.
The earlier years of Joseph McElroy’s life were spent in his native county, but in 1837 he decided to investigate the then far west and set out for the . He reach Sabula during that year and finding the country to his liking, went back to Pennsylvania for his folks and returned to this county in 1838 and entered 200 acres of land in Iowa township, west of the town of Sabula. In an exchange afterward with Mr. Grant he came into possession of the quarter section of land which he owned to the time of his death. When gold was discovered in , Mr. McElroy and a number of other Sabula men organized a party and in 1849 made the hazardous overland trip to that state and engaged in mining until 1852, when they returned to their homes. The return trip was made by way of the Pacific ocean, crossing the isthmus of Panama and the Gulf of Mexico and up the Mississippi river to .
On Sept. 22, 1853, he took unto himself a wife and helpmate, Mrs. Mary A. Winsor, a daughter of G. Gilroy, then a resident of county. The fruit of this union were four children. They are George of Malvern, Margaret, who died in infancy, Mrs. J.F. Schramling of the city, and Joseph, of . Three step-children who were reared to manhood and womanhood by the deceased, also survive him-Mrs. G.A. Buzza, of Marion, Mrs. G.A. Hatheway of Magnet, Neb., and Wm. Winsor. The esteemed wife and mother passed away on November 1, 1872, and soon afterward Mr. McElroy moved to a home he purchased in town, where he lived until the past few years where he has made his home with his daughter, Mrs. Schramling.
At the time of the rush to Pike's Peak, about the year 1849, Mr. McElroy and Clarke Cook (deceased) started for , but after getting as far as the river returned. Of the Sabula party of "Forty-niners," Mr. McElroy was the last survivor and he was also the last original member of the Sabula Pioneers’ Association to pass away. This association was formed on Nov. 22, 1872, by J.G. Sugg, E.A. Wood, James Murphy, J. S. Dominy, George Canfield, Robt. C. Westbrook, Royal L. Westbrook, Jos. McElroy, John Scarborough and Oliver Emerson. All of these gentlemen, with the exception of Joseph McElroy passed ___ ago. The latter was always a familiar figure at the annual picnics of this association until the last one held when he was confined to his bed in this his last sickness, the general breaking down caused by old age. On this occasion several of the older settlers called and spent a short time visiting with him and the parting of these old friends of the early days was a very pathetic one.
For the past three years Mr. McElroy has felt the weight of years and his health gradually failed until last February, he was obliged to take to his bed and although his condition varied from better to worse it could be seen by those around him that he was gradually nearing the close of a well spent life. Sunday he conversed with the family and appeared brighter than usual, but at 6:25 the end came and his last moments were marked with peace and contentment and thus he passed away.
Eulogies to the life and character of this grand old ___” 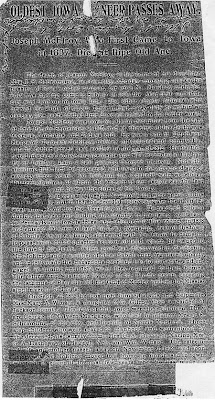 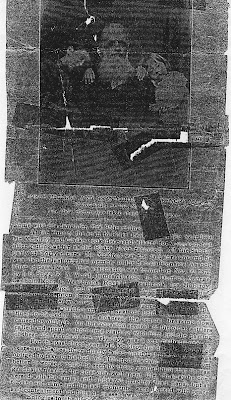