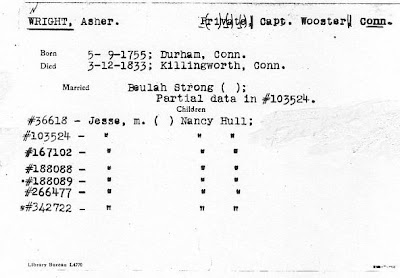 Example of an old Genealogy Record card before the new online system was made available to the public this week.

The big news that the Daughters of the American Revolution (DAR) recently released about the Online Research of the DAR Genealogical Research System sure is exciting, to men and women.  Randy Seaver posted an explanation recently, http://www.geneamusings.com/2009/11/using-dar-grs-ancestors-and-descendants.html.  His article is quite good, so there is no need for me to repeat it.

What I can do, for those who like a little background, is explain how the system used to work.  Above is a copy of an original card.  A new National Number was typed with the name of the child (Jesse Wright) of whom the new DAR member descended from, going to the patriot, in this case Asher Wright.  More than one child's name could be on a card.  If there were five children, you are lucky, because of the additional information you could get. Recently, I posted two examples of my very early ancestors who were DAR members, the first name listed in both the old and new systems.  Sophia Davis Bishop's with National No. 36,686.  See: http://lifefromtheroots.blogspot.com/2009/11/dar-application-1901-and-letter-from.html  The old method was rather archaic, and errors were bound to happen, probably more frequently than the new data entry system.  In addition, the cards could be filed away in the wrong place, or walked away.  The room where the cards were stored, was off limits, but since I worked there, I managed to get copies of a good 10 or so of my ancestors.  Now you can see why I am so excited.  This is a great site to see if you have a Revolutionary War patriot.


A copy of the same information, from the new online site for Asher Wright is below. 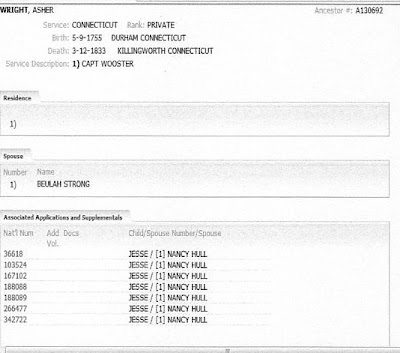 Image of the new

Note:  As yet, I don't know how to make the links smaller.  But at least they work.
DAR Online Research site:  http://www.dar.org/library/online_research.cfm

We Have the Same Name. She is a Cousin!

We grew up with the same name, wrote to the Newberry Library in Chicago the same week and found out we were related. Let me explain.

On November 23, 1998, I sent an email to the Newberry Library, stating I just found out (after nine years of doing genealogy) that my 2nd great grandfather was the first Librarian of the Newberry, and could I have the address or email of a researcher who could help me.

A reply soon followed, stating they had researchers as well as a lot of information that they could send me. That short email also had this line, "I recently made copies of some material on him for another person" Of course I wrote back and said, "... can you tell me for what purpose, or is it confidential. I am wondering if it is a long-lost relative, or is he/she writing a paper?"

A few emails later, I got the name of the other Barbara Poole who was also researching him. We then corresponded and determined we were second cousins, once removed, but both of us were still a bit leery of the other. She lived in Texas and me in Massachusetts. However, once I found out her aunt’s name I remembered many years ago, having dinner at her aunt's house. Once given the aunt's phone number, I called her in Duxbury, MA and she remembered my family and the Thanksgiving dinner.

Once the other Barbara found out about the dinner and other things, I felt she really believed me. It took us both a while to accept our new relationship.

Barbara, a teacher, and I wrote many times, but only when her classroom was open, as she didn't have a computer at home. When summer vacation came, we were out of luck and out of touch. I have tried contacting her in the past, but no reply ever came my way, and the elderly aunt passed away. Several months after my initial query to the Library, I wrote an appreciation letter to the Reference Librarian who had the initiative to let me know about the other Barbara Poole. She had wanted to write an article about the two Barbara's connecting, for a little piece in the Library's newsletter, but I never heard if she did.

I call this story, "We have the Same Name" and I've told it several times because it is rather unbelievable. It pays to follow leads and pray for somebody who is willing to go above and beyond their job duty. Now, where can I find that other Barbara Poole?

UPDATE: September 28, 2018
As I review some of my old posts, I've made additions, corrected typos and changed photo and font sizes.

Since I am trying to find her cousin, I've decided to use her name, with hopes she will be found. It is, Barbara Poole Whatley, her husband is Thomas, and they have a son, Bryan. I believe they might still be living in Texas.

The name of the Reference Library at the Newberry Library is Rhonda Frevert. Not long after she and I corresponded, I got a notice that she was appointed Curator of the Local and Family History Dept. at the library; however almost 20 years later, she is the director of a library in Iowa.

Please see my post, with many photos taken by my friend, Diane M. Boumenot during her visit to the Newberry Library. https://www.blogger.com/blogger.g?blogID=4664905362839287500#editor/target=post;postID=1220187835891929620;onPublishedMenu=posts;onClosedMenu=posts;postNum=2;src=link
Labels: Library, Newberry Library, Surname: Poole
Email ThisBlogThis!Share to TwitterShare to FacebookShare to Pinterest