The First Demoulas Market Basket in Lowell, Massachusetts, the Fighting Two Cousins and All the News it's Making

The First Demoulas Market was established in
Lowell in 1917 by Athanasios "Arthur" Demoulas
and his wife Efrosene (Soulemanis) Demoulas.
Immigrants who ten years earlier had arrived
in Lowell from Kalabaka, Greece.

In 1955, the market was incorporated by their
sons Telemachus and George, who expanded the
business to 14 supermarkets before George's
early death in 1971.

Telemachus went on to create on of the
largest supermarket chains in New England.
He became a well known and respected
philanthropist beloved throughout the
acre and the city of Lowell for his
generosity, his vision and his spirit.
He died in  2003 at the age of 82.

The photo above and below were taken behind the house where James McNeil Whistler was born.
(The marker is in the middle, with red car to the left.) 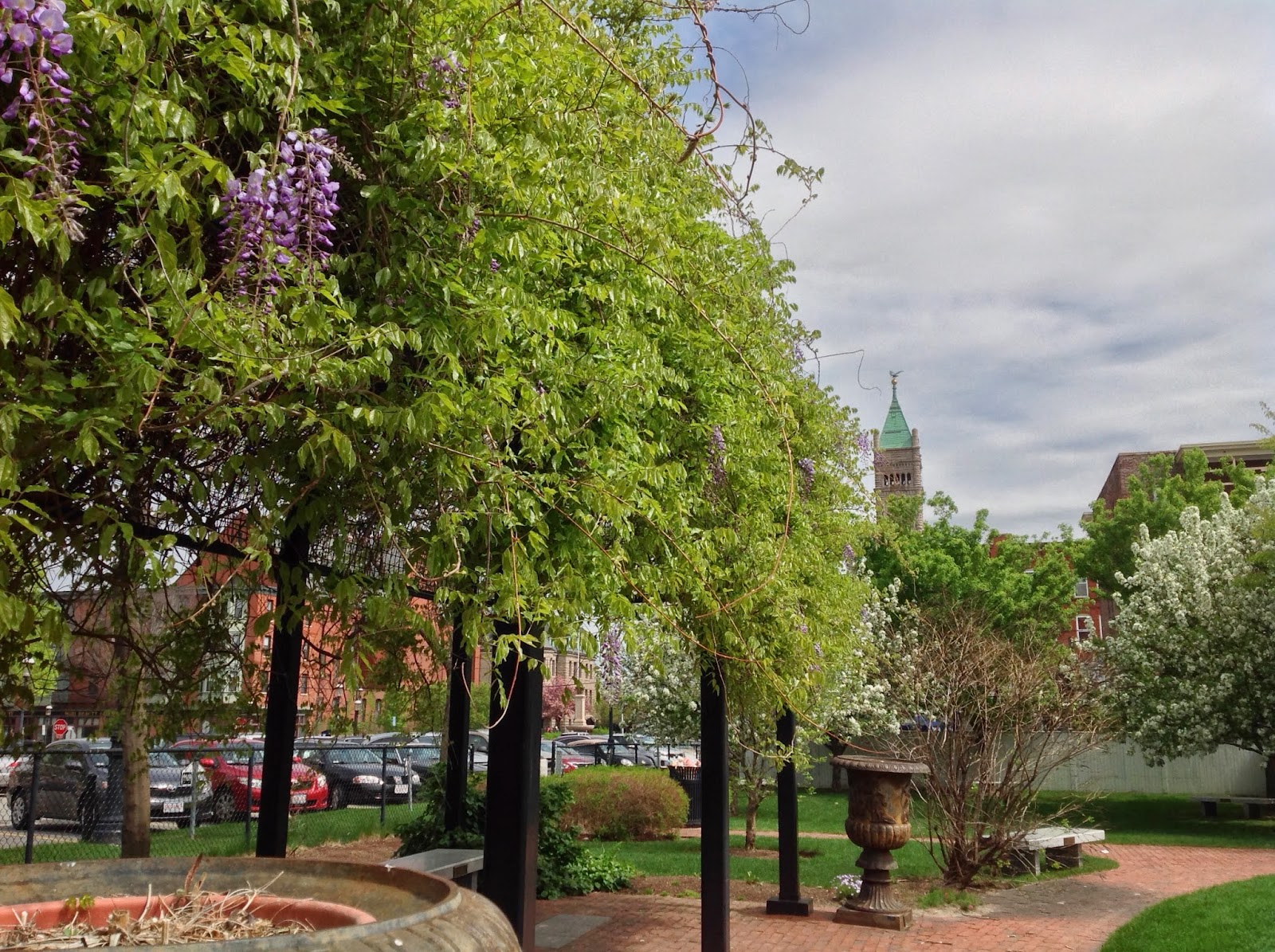 To read more about this family and the business, see Wikipedia HERE or google Demoulas or Market Basket. It is currently on our Massachusetts news non-stop, and on national news as well. I'm posting this because there might be some people who would like to see photos from two of their 71 stores. 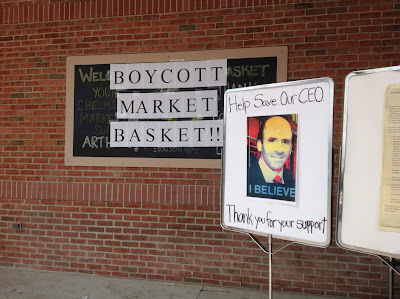 There is a feud between two cousins and apparently, there has been bad blood for many years. Both cousins have the first name, one is Arthur S. and the other Arthur "Artie" T.

As a result of the favored cousin's firing, the employees are extremely upset, as are the customers. People are not shopping in the stores, instead of dragging themselves to the more expensive stores such as Hannaford, Stop and Shop and Shaws as a way to force the other cousin to change his ways. Employees and customers are picketing side by side and many customers are bringing food for the employees. This began at least 12 days ago, and nobody knows when it will end or what the outcome will be. 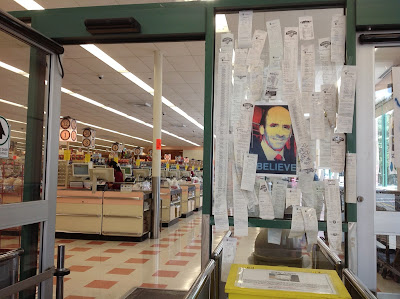 Customers are taping their receipts from competitive stores on the doors. Market Basket is losing at least 10 million a day because of this. 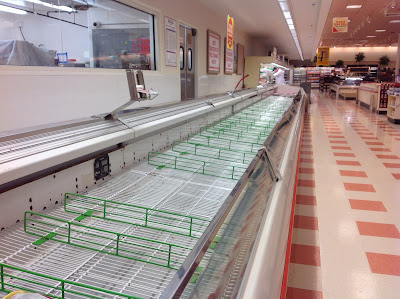 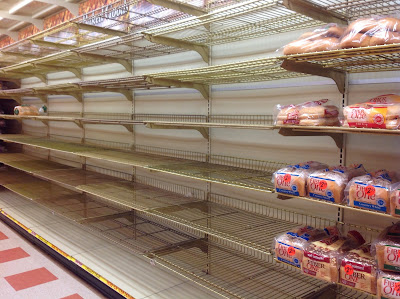 Unsold bread and other perishables are donated to food banks. There hasn't been produce in the stores for about 14 days, so many of the local farms are doing a brisk business, now selling fresh blueberries, corn and other crops. 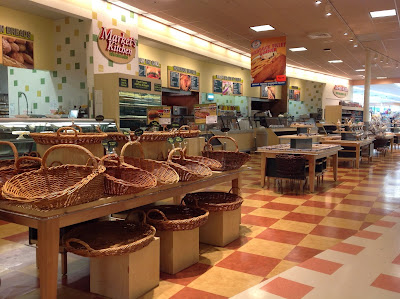 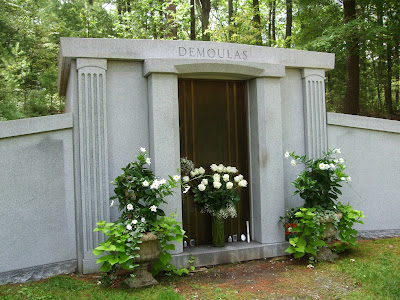 Artie T.'s father would be so proud of him. 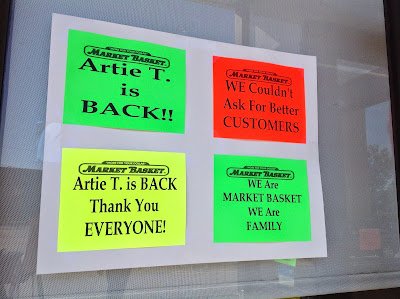 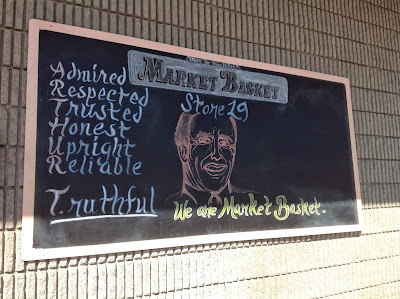 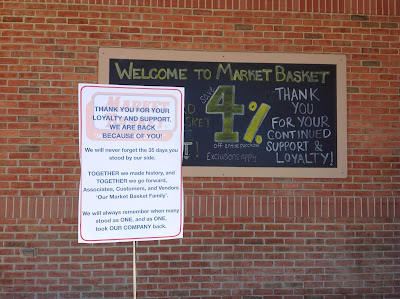 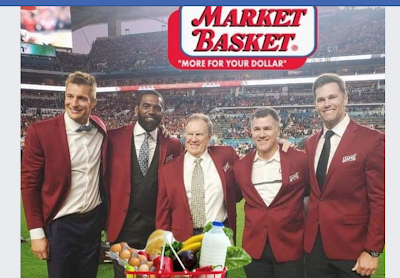 This Market Basket picture was all over Facebook after the Super Bowl game on February 2, 2020, unfortunately the Patriots didn't play in. It had been noted that these Patriots, including Tom Brady, were wearing jackets similar in color and style of the Market Basket managers.


A year later, sweet as ever

August 6, 2014, The Today Show had a long segment about Market Basket. See HERE.

August 12, 2014, WCVB news, "Market Basket employees told to return or lose jobs" "We are writing one final time, to invite you to return to work and perform your job obligations."  http://www.wcvb.com/news/3-market-basket-board-members-urge-end-to-standoff/27423768?utm_source=hootsuite&utm_medium=facebook&utm_campaign=wcvb%2Bchannel%2B5%2Bboston

Why B-Schools Should be Teaching Market Basket http://www.huffingtonpost.com/judith-samuelson/why-b-schools-should-be-t_b_5682367.html

FIRST APPEARANCE OF ARTIE T. DEMOULAS AS THE RETURNING CEO AND NOW OWNER OF MARKET BASKET, August 28, 2014.  Artie T’s closing words: “It’s great to be together again, you’re one of a kind, let’s have some fun.”
http://www.wcvb.com/news/market-basket-hustling-to-stock-shelves-after-deal-reached/27768080#!bLHf5y

"THE MARKET BASKET fight first made headlines in national outlets such as The New York Times and NBC Nightly News, among others. Last week, the Massachusetts Institute of Technology held a forum that attracted hundreds to hear about lessons that can be gleaned from employees' victory in getting the company to sell to beloved leader Arthur T. Demoulas.
A few workers who attended the forum loved that it was held just across the river from the Prudential Center in Boston, where the Market Basket board held so many of its meetings.
But no one probably expected a former U.S. president to mention the chain's name. But Bill Clinton did in a CNBC interview Sept. 23 at the Clinton Global Initiative.
Clinton was asked by reporter Becky Quick about the American economy, with the stock market soaring as many middle-class families still struggle. Clinton mentioned three reasons for the sluggish job market: a need to raise the minimum wage, need for a better mix of jobs, and the fact that so many companies are using their wealth on dividends or buying back stock."
Labels: Demoulas / Market Basket, History, Location: Lowell Massachusetts, Market Basket / Demoulas, Photos
Email ThisBlogThis!Share to TwitterShare to FacebookShare to Pinterest