"Very Poor and of a Lo Make" Abner Sanger

Unusual title, I know.  The Very Poor and of a Lo Make is a title of a wonderful book that had it's beginnings back in 1774. It is comprised from a set of journals that Abner Sanger kept from 1774-1782 in Keene, New Hampshire and 1791-1794 in Dublin, New Hampshire.  His papers were kept for 44 years, then were passed down from generation to generation until they were put up for auction in 1914.  From Page XI, "The Library of Congress bought the collection of Sanger papers.  Taken to Washington, the pages of the little booklets were cut apart, silked and bound (with the letters from father to son) between hard covers.  The journal was placed in the Manuscript Division."

"Abner Sanger once referred to in a legal proceeding as a man, 'being very poor and of a lo make.'"  When he died, the local newspaper wrote, "Died in this town, Mr. Abner Sanger, aged 83."  It is nice to know that his life is still being read about.

Other than providing valuable insight into the life of a farmer living in Keene and Dublin, New Hampshire for much of his life, there is a nice chronology of his life and some genealogical information. However, Abner didn't write much about his family, but the author incorporated a small three generation genealogy section of the Sanger family and that has helped me tremendously. While I am not directly related to him, I am to his second wife, when Elizabeth "Betsey" Johnson married again in April 01, 1784. Abner and Elizabeth had seven children together. 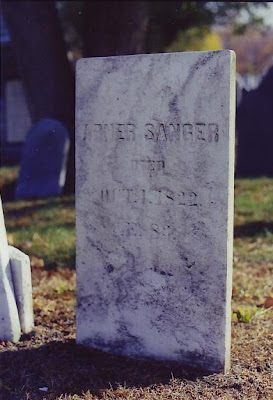 Buried at Old Cemetery, (Known as Washington St. Cemetery)
Keene, Cheshire Co., New Hampshire
His wife, Elizabeth is buried in Dublin, photo below and it is on
Find-A-Grave. 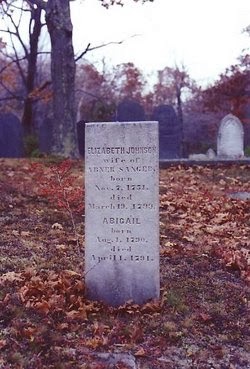 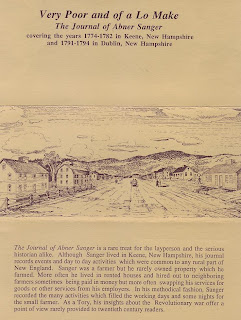 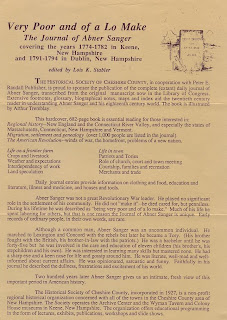