A yacht, a home owner, a visitor to the Lowell house, and a housekeeper

One of the benefits of blogging is you often hear from people who read your post and wanted to either leave a comment or write you personally to share some information. As shown below, I received emails from several people who offered bits of information about Mr. Fay, a person none of them is related to, because he didn't have children or family, nor did any know him because he died in 1944. There always seemed to be a lot of unknowns and mystery regarding the extremely wealthy Mr. Fay, and later members of the Donehue family, because for over 53 years, I'm still hearing stories, like the ones below. The messages to me are interesting and will give you an example of what you might receive from a reader of your own blog.

Within a four-month period in 2014, I heard from four different individuals all sharing information about a Mr. Auburt J. Fay. He was important to me, because he founded the company where I worked at for over 10 years. Everybody knew of the Father John's Medicine Co., Inc. and it continued manufacturing the medicine until about 1976. The old massive downtown brick building is now used for elderly housing.

One person told me she saw and is familiar with Mr. Fay's yacht (wait until you read who later owned it), one is a relative of the person living in Mr. Fay's old house, another person purchased a summer home belonging to Mr. Fay in Connecticut, and the last person told me her aunt was a housekeeper in Mr. Fay's home! After Mr. Fay's death, George H. Donehue Sr. become president and lived in the house with Mrs. Fay until she died in 1965. He died in 1967, then oldest son, Gerald Donehue, became president and moved into the large Fay house (or maybe he was living there all along because he didn't have children). At one time, all three Donehue men worked in the office at Father John's Medicine while I was employed as their secretary.

My name is Barbara ____ and my brother came across your blog and forwarded it to me as I am the family genealogist.
I enjoyed reading your blog and finding out that we have some things in common besides our name!
I also enjoy genealogy, gardening, and photography!
But besides that, it was very interesting to learn of your working for Father John's Medicine Company and knowing the Donehue Family and being in that beautiful White House (I believe was on Mansur St).

I was also in that house as a young teen in 1967 while my parents, sister and I visited George Sr., George Jr, and Gerald.  My sister and I stayed with George and Marion and my parents stayed overnight in the house with Gerald and his father.  My grandfather is Herbert Donehue and is George Sr.'s brother.  Herbert moved to Detroit in 1919 where he and his wife Rose Hannon (also of Lowell) had 2 sons Raymond and Francis. My father was Raymond and he stayed in touch with Gerald until his death.

Thank you for posting your experience with the Donehue family and memorializing them. It is heartwarming to hear about the way they treated you while working for them. Since we lived in Michigan we didn't get to know any of them very well.

I traveled to Lowell in 2005 to gather records on both sides of the family and went to St. Patricks Cemetery and visited gravesites. I have obtained quite a few records in my years of research and hope to put it all together for my family and future generations.

Thank you so much for taking the picture of George and Marion's house. I do vaguely remember it, but my Mother certainly did! She remembers sitting on the side porch and visiting with them. It was so nice of you to do that as I will certainly use it in my genealogy book I am putting together.

Your mention of George and Gerald doing a lot of golfing seems to directly relate to my own family who all golf.  My Father, Mother, my 9 siblings, and myself golf, (or did golf in the case of my Father.) My brothers have a golf tournament every year called "The Ireland Cup" and it is a tribute to the Donehue Family and includes all my Donehue cousins.  Thanks to you, now we know where the golf gene came from!

I stumbled across your blog recently re The Fay's of Lowell...Father John's Medicine family. I live in what was a summer house for them in the Eastern Point section of Groton, CT. I would love to know more about them!

My husband purchased the house in 1964 from the Executor of Aubert's estate, Gerald Donehue. Evidently, Mr. Donehue then took over the company as well. I have a few black and white pictures of the house after the 1938 hurricane showing a fellow I would think is Mr. Fay inspecting the damage.

The Groton house is located in a section of town where many people came for Summer in the later 1800s and early 1900s....a number of the houses are still in good repair while a few have disappeared. There is a summer chapel very close by that served as the residents' place of worship, too.

I would love to connect with anyone who might know about the Fay's. Please keep me in mind. (Note: I was working at the company in 1964 and never knew about the Groton house. Apparently, it was either rented or used as a summer home from 1944-1964.)

#3  July 2014, from Mary (Facebook)
My aunt Kitty was the housekeeper in the Fay house for Mr. Donehue in the big white mansion at the top of Belmont and Mansur Streets.

Hello Barbara,
I came upon your blog while doing some research regarding a rather famous yacht “Freedom”, a 1926 104 foot Mathis-Trumpy that was restored after nearly sinking in the St. Johns River.  The reason for looking into this yacht was because my husband and I live aboard a sailboat and cruise throughout the Caribbean, and while living in the Florida Keys, this beautiful ship was tied at the end of our dock.  We later came upon her on several occasions while cruising through the Bahamas.  I knew she was a special boat but never took the time to really look into her history until I began writing my own articles about our cruise.
It turns out that “Freedom” was first purchased by your Mr. Aubert J. Fay – who, according to your blog was the owner of the Father John’s Medicine company.  Here’s where it gets interesting.  The second owner of this beautiful ship was Jessie May Woolworth Donahue, heiress of the Woolworths retail empire and the richest woman in 1930s America.

This Spring 2005 issue of Restoration Quarterly confirms that the boat "Freedom" was built for Mr. Fay of Lowell, Mass. http://www.woodenyachts.com/media/presslibrary/restorationquarterly_2005.pdf

(I remember seeing a postcard of the "Freedom" while working at the company. It's nice knowing the rest of the story.) 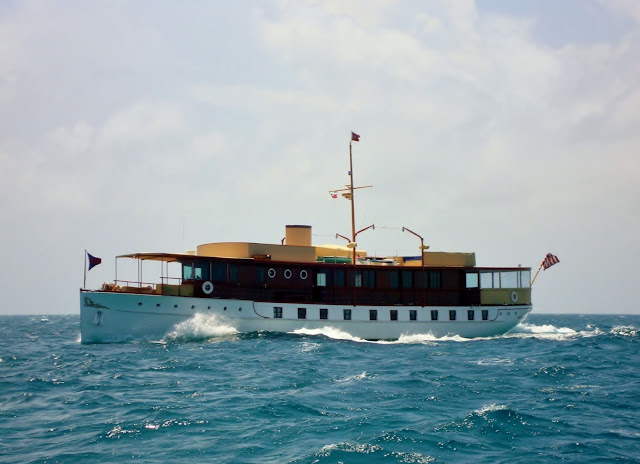