When I planned my Nantucket, Massachusetts trip the other day, one of the things I wanted to do was to see the oldest cemetery, but did I see it? I was told The Old North (below) was the oldest cemetery, or the Old Settlers Cemetery and possibly the Founders Burial Ground. The google searches didn't help much. I am thinking all are one and the same. 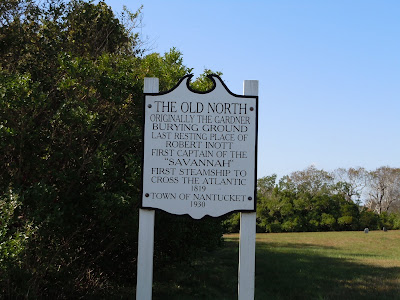 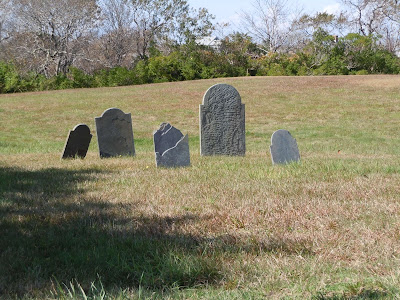 Who was I looking for? My two 8th great-grand uncles and a first cousin, 9x removed. Richard Gardner, died 1686,  John Gardner, died 1706 and John's daughter and son-in-law, Jethro Coffin and Mary Gardner Coffin. The Jethro Coffin house is the oldest house in Nantucket, and it still stands. I'll post photo tomorrow.

Information obtained from a FindAGrave volunteer, wrote: "A monument was erected to honor the founders of Nantucket island in 1881. The monument is located in the Nantucket Founders Cemetery (also referred to as the First Settlers' Burial Ground and the Forefathers' Cemetery)."

From the Nantucket Historical Association page:

Unfortunately, I did not see the memorial.
Labels: Cemetery, Location: Massachusetts, Surname: Gardner, Tombstone Tuesday
Email ThisBlogThis!Share to TwitterShare to FacebookShare to Pinterest