Boston Athenaeum, What Was in it for Me?

The answers to, The Boston Athenaeum, What Was in it for Me? are two things. First, I saw a large card catalog, a magnet for me, and the second was the masterpiece painting by N. C. Wyeth I had been waiting since June 2016 to take a photo of. I blogged about my tour at the Boston Athenaeum in October 2017, but didn't discuss the two topics mentioned above.

We (my husband and I) began our Open House tour of the six-floor Boston Athenaeum by taking the elevator to the basement. When the door opened, we faced magnificent large-sized oak card catalogs. Since we're on our own self-guided tour of the library, I had to stop, because right in front of me were the drawers to the Ps. Yes, I found my Pooles, both of them, Charles Henry Poole and William Frederick Poole, both my 2nd great grandfathers. Their children married each other. 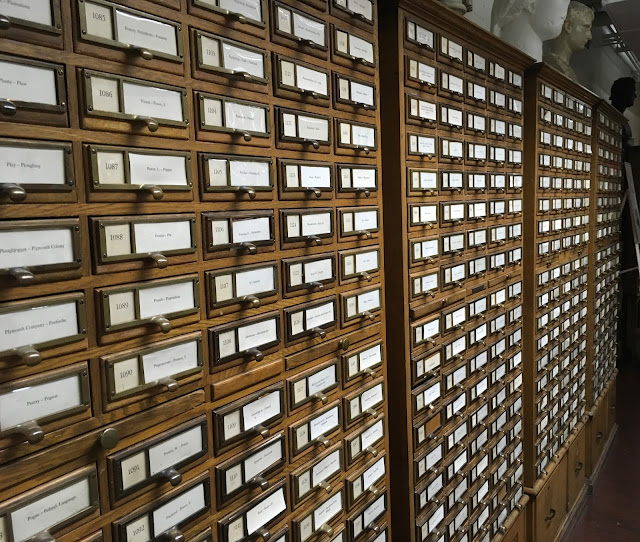 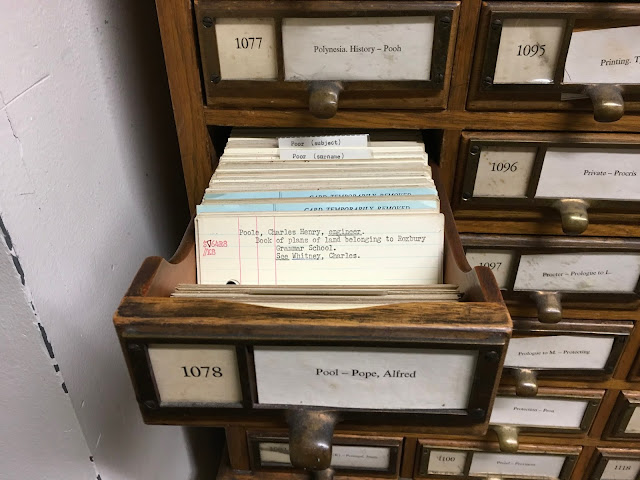 Both my 2nd great-grandfathers have material in the library. Charles H. Poole has one (above), and William Frederick Poole has 27 (below). All listings are at the end of this post. 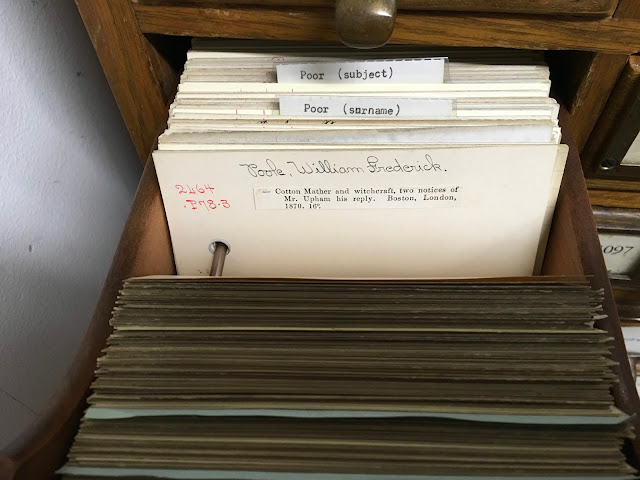 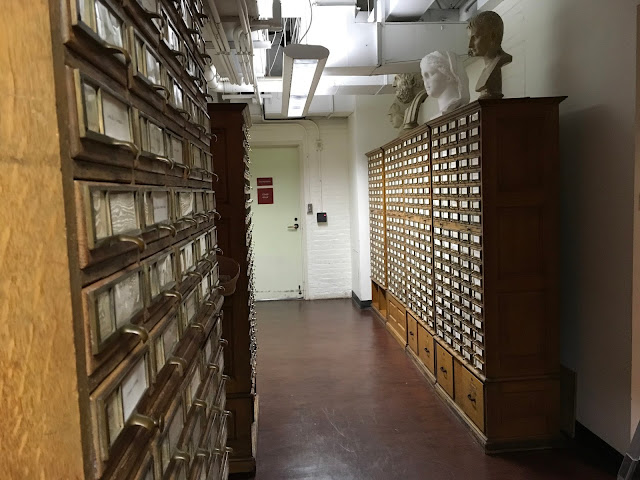 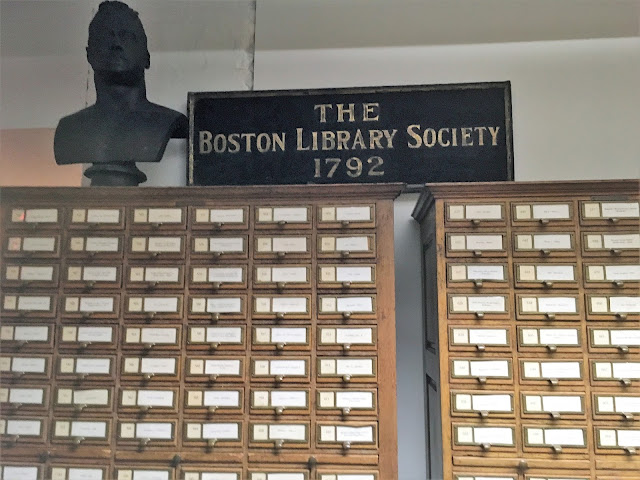 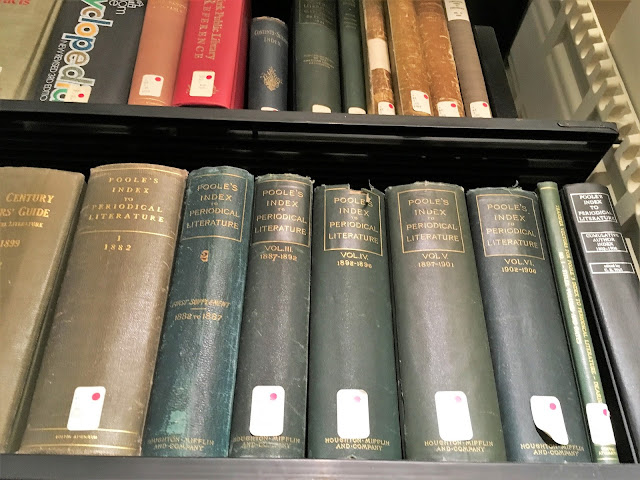 On one of the upper floors, I found a set of William Frederick Poole's, Poole's Index to Periodical Literature volumes. The books also seen below, just above the head on the lady on the right, up from the red books. This was not a new find to me, because I had seen them at the Boston Public Library around 1998. 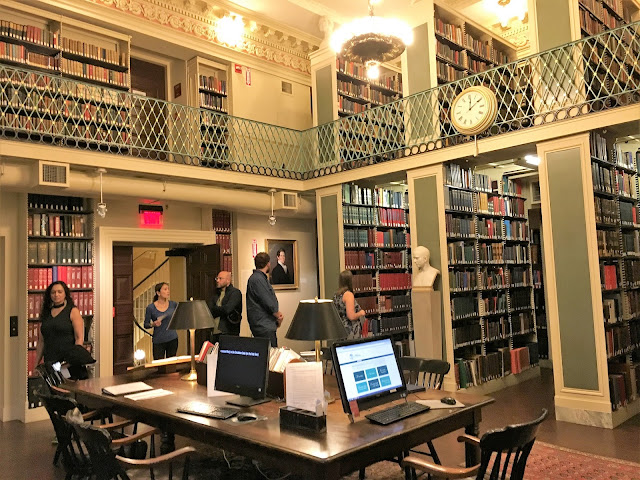 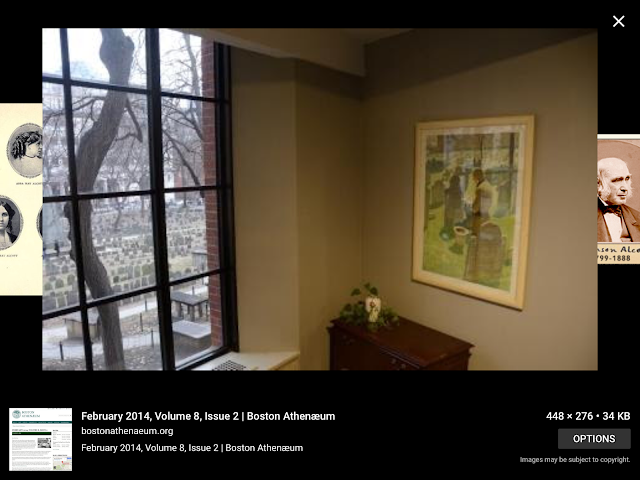 The above picture was taken from the Athenaeum's web page in 2016, soon after I saw the above painting on exhibit at the Concord Museum in Concord, Massachusetts. Unfortunately, no photos were allowed there, so I inquired as to who owned it. I was told it belonged to the Athenaeum, and with that information, I found the above web page and knew I had to be patient because eventually, I'd see it.

During the open house last fall, I searched on every floor and quite by accident, as I walked by the closed darkened membership office on the first floor, there it was! I got to an employee as quick as I could, and almost begged to see if she would open the door. She did and remained patient as I took quite a few pictures, turned on the office lights and looked out the window. Outside is the Granary Burying Ground, and this painting was done there by N. C. Wyeth, as he painted Louisa May Alcott's father Bronson Alcott reading a tombstone. Thanks to the cemetery stone in the foreground, with the two skeletons, I was able to find the stone rather easily. (The tree above, is also seen below.) 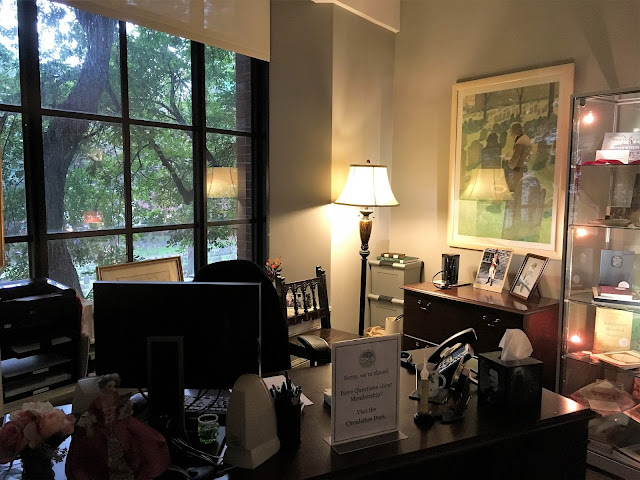 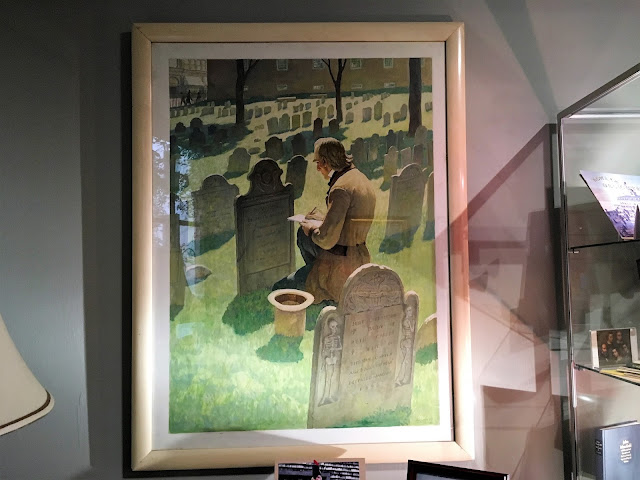 In June 2016, I wrote, What Did Louisa May Alcott's Father Think About Genealogy? If you are curious, you might enjoy it. Below, is the cemetery stone in the above painting. 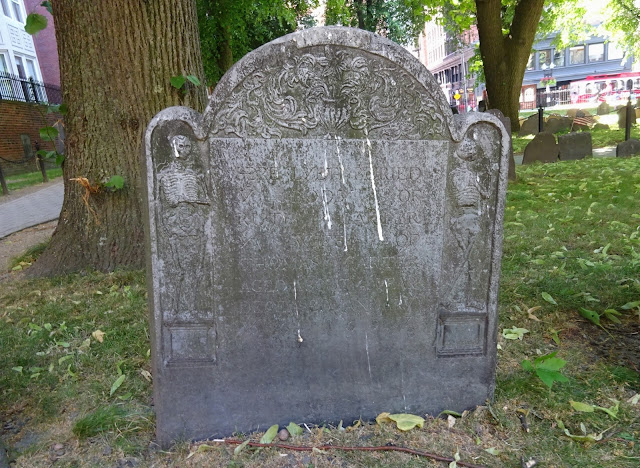 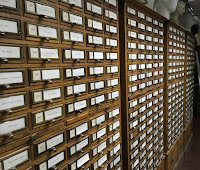 From home, you can check their online catalog to see if you too have authors in your family. To do a basic search in the Athenaeum's online catalog, use this link:
https://catalog.bostonathenaeum.org/vwebv/search?searchType=7&searchId=319&maxResultsPerPage=50&recCount=50&recPointer=0&resultPointer=4&headingId=902730
Just follow the directions. I had no problem getting my results, shown below.

Poole, William Frederick, 1821-1894.
Anti-slavery opinions before the year 1800; read before the Cincinnati Literary Club, November 16, 1872 by William Frederick Poole ... to which is appended a facsimile reprint of Dr. George Buchanan's Oration on the moral and political evil of slavery, de
1873
D945 .P78
Available, TBMR (Appointment required)

Popham colony : a discussion of its historical claims, with a bibliography of the subject.
1866
961P81 +P78
Available, Cutter Classification

Poole, William Frederick, 1821-1894.
Report on the progress of library architecture. By William F. Poole ... and resolutions of the association concerning the building for the Library of Congress.
1882
XJ9 .P78
Available, Cutter Classification

Johnson, Edward, 1599?-1672.
Wonder-working providence of Sions Saviour in New England / (by Captain Edward Johnson of Woburn, Massachusetts Bay) London, 1654 ; with an historical introduction and an index by William Frederick Poole, Librarian of the Boston Athenaeum.
1867