You Plan and Plan, then, Say What? Tombstone Tuesday

For years, at least 10, I've wanted to visit a cemetery in an area of Massachusetts I've never been, and never wanted to see. On a map, it looked like a complicated trip, not particularly long but the unfamiliar roads in a heavily populated city near Boston just scared me. I had to put it off until I felt comfortable to drive and I ran out of taking most of my direct line ancestor's cemetery photos (I've taken about 150 so far).

The trip was mapped out, and my husband and I headed for Revere, 5 miles from Boston and next to the Atlantic Ocean. From Google maps, I saw the Ye Olde Rumney Marsh Burial Ground, established in 1693, was in the middle of a block of houses, yes, I knew the houses surrounded the cemetery. It wasn't difficult to find this residential area, but I never expected a high stone wall completely surrounding the cemetery with a iron-tight gate, locked at that! Hey, my ancestors (three directs) were in there and there was no way to get in, no phone number, nothing. Should I have knocked on all the house doors, who has the key? We sat there for a bit, I took the two photos below, but what good is that, I can't even read what it says. 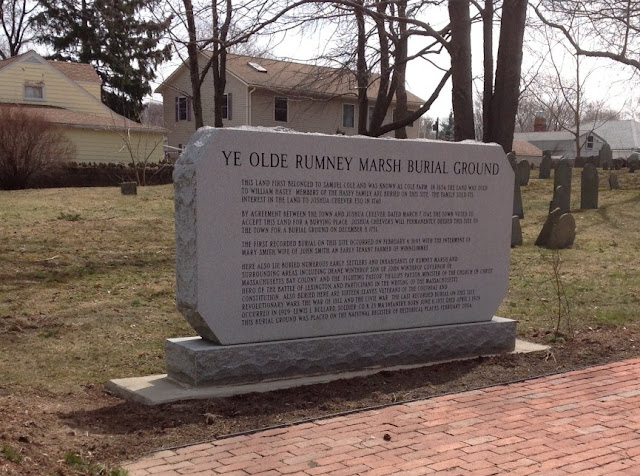 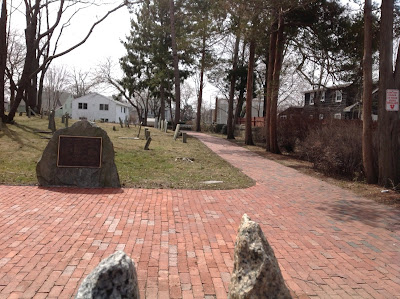 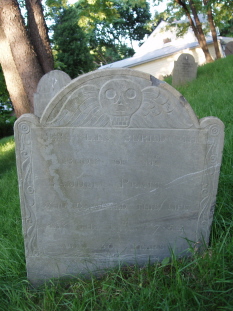 Fortunately, there were photos on Find-A-Grave and I contacted the two photographers who took pictures before the cemetery was restored several years ago prior to its re-dedication in 2009. Photos taken by Bill Boyington (top two) and Kevin O. (bottom only), permission was granted to use on this blog.

Below are tidbits from Wikipedia about Revere, Massachusetts

It is named after the American Revolutionary War patriot Paul Revere.

In 1775, the area played a role in the American Revolution as the site of the first naval battle, at Rumney Marsh, and other locations.

Revere’s first inhabitants were Native Americans who belonged to the Pawtucket tribe and were known as the Rumney Marsh Indians.

Revere Beach is the oldest public beach in the United States. It has a fairly active beach front district.