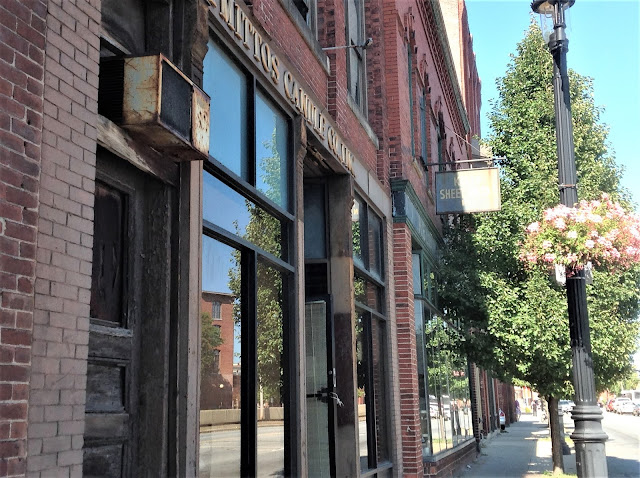 For at least five years, I've been intrigued by the Ymittos Candle Company, located at 279  Dutton Street, Lowell, MA, across the street from the Lowell National Historical Park Visitors Center. I passed by it quite a few times, and the first photo shown below was taken in September 2014. A few days later, I decided to step inside.

A candle manufacturing company may be an odd topic to write about, but since I have some pretty interesting photos, I thought some Lowellians would be interested. I subscribe to a number of facebook groups, pertaining to Lowell, and whenever this company is mentioned, there is indeed interest...many readers know of relatives, friends or even themselves who worked there. 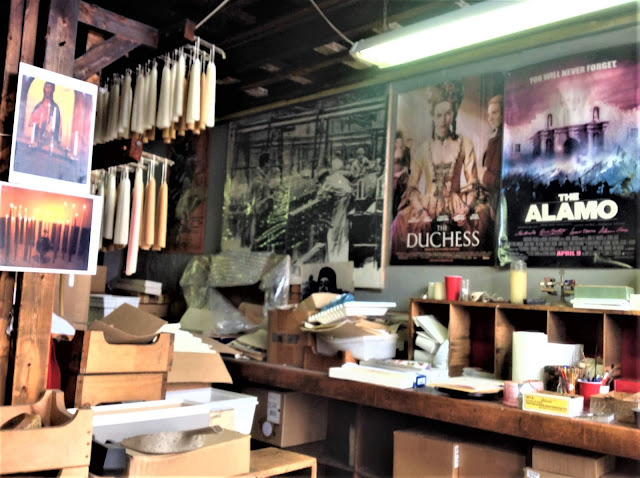 On Sept. 25, 2014, I returned and was glad the door was open again. On the first floor was the display area to the right. The owner / employee sat to the left of the door, let me take photos but asked that I not take a picture of her area. If this person only knew how much I like messy, it shows character. She mentioned some plans for celebrating Halloween in this office area, and took my email address to notify me of the plans. 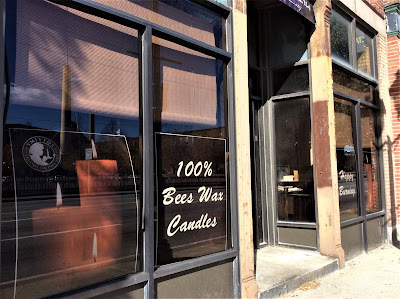 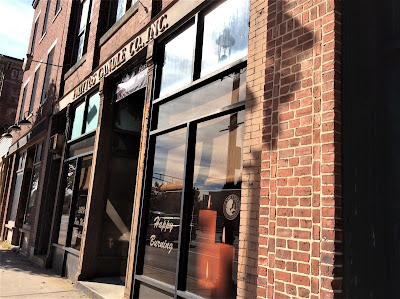 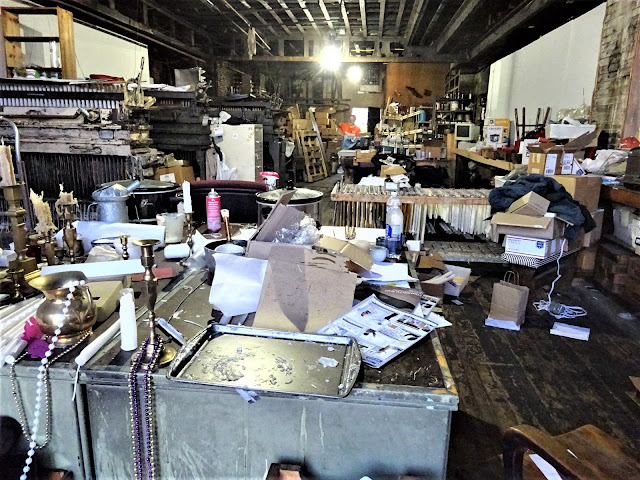 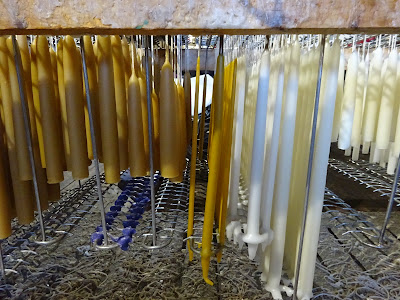 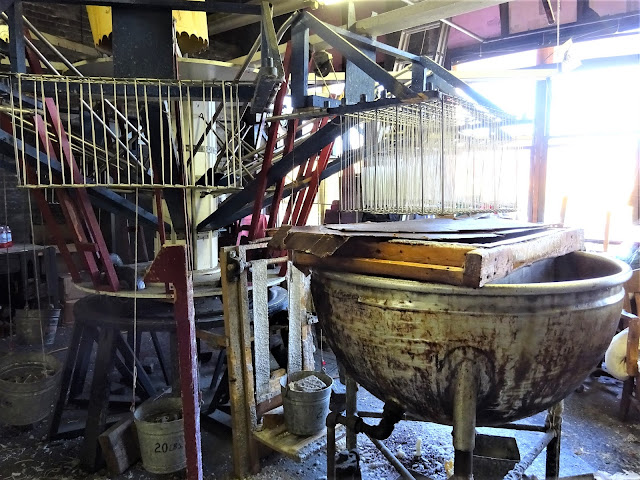 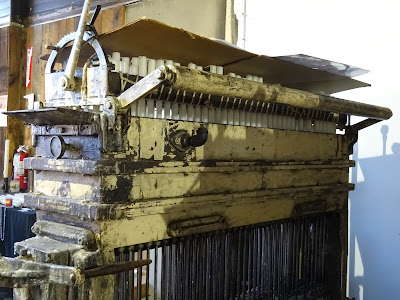 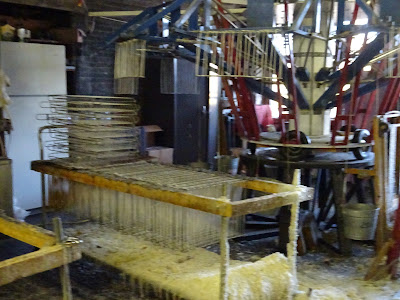 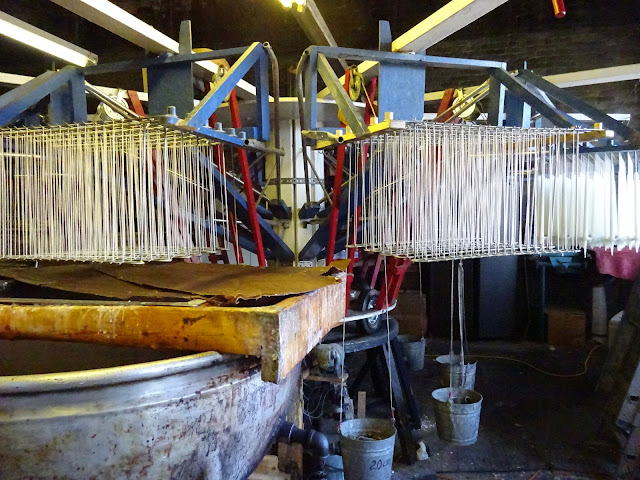 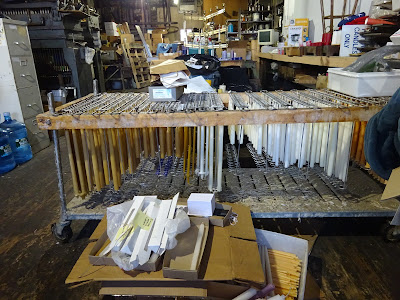 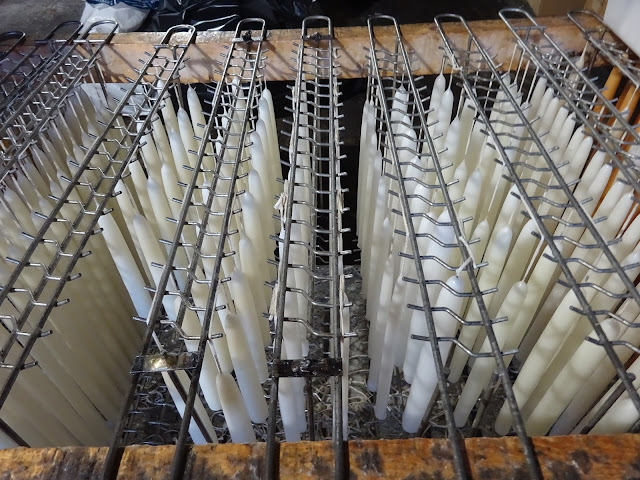 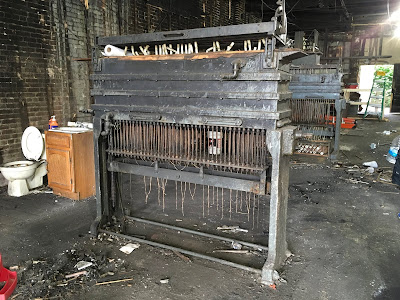 The office and back doors were open, and a crew was removing equipment. They had no problem with my taking photos, on May 30, 2018. The building was sold sometime during spring, 2018 and moved to Chelmsford St. in Lowell, Massachusetts. 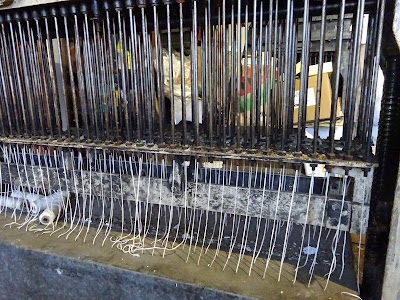 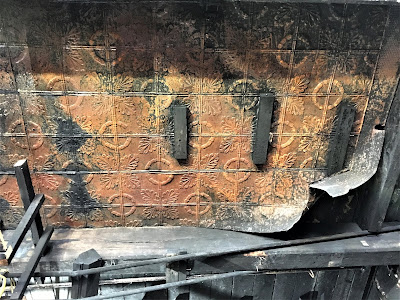 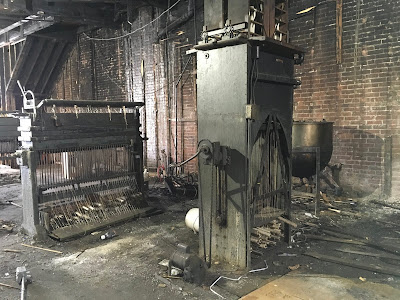 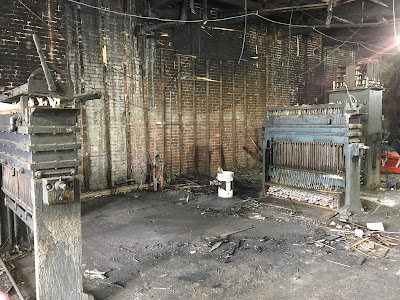 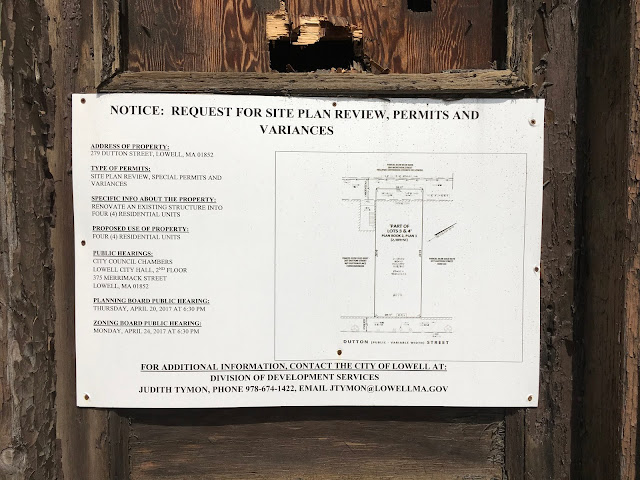 Sign in front with future plan. During my first visit in September 2014, I was informed that the co-owner had recently died, and that there might be changes. From a google search, here is the interesting obituary for Michael Kaplan. 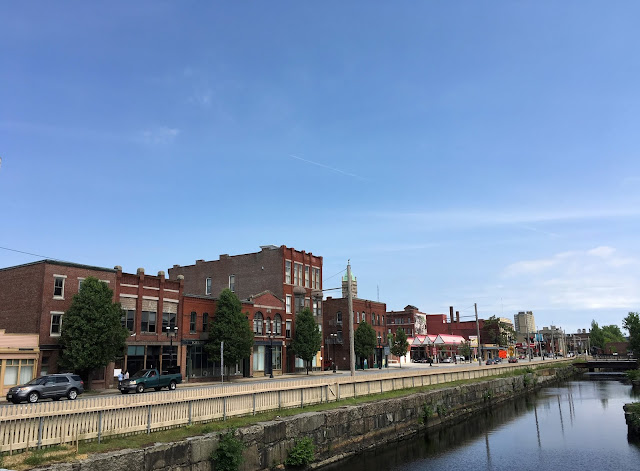 Photo taken May 30, 2018. Ymittos Candle Company located behind the black truck. This is on Dutton Street, facing the Merrimack Canal, and across from the Lowell National Historical Park visitors center. 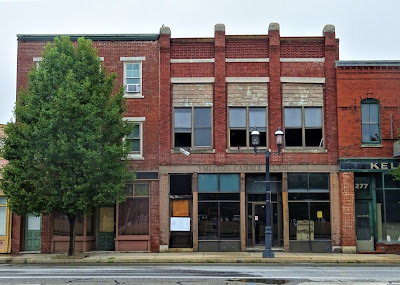 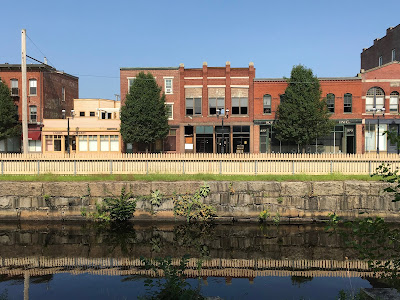 You might enjoy seeing the 32 black and white film negatives taken by Wachs, Eleanor F. (Photographer) in October 1987 in Ymittos Candle Company. They are in the Lowell Folklife Project Collection, Now property of the Library of Congress.
https://www.loc.gov/resource/afc1987042.afc1987042_ew_272/?sp=1 (See example of a photo below.) 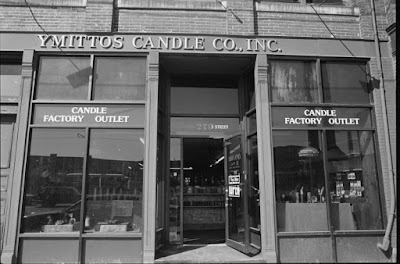 Below is information from the website of Ymittos Candle Manufacturing Company.

ABOUT US
Ymittos Candle Manufacturing Company has been lighting the way for over a century!
​
Since 1910, master craftsmen have produced the worlds highest quality candles from the finest waxes and 100% cotton wicking without using automation or modern machinery. 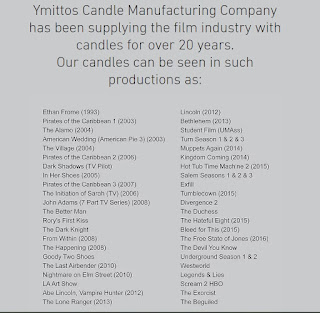 My title refers to three different periods of time in my life, I will soon explain why I chose these topics. The last blog I wrote was, We Walked to Charlestown, MA to tour the USS Constitution, written in May, five months ago. My 10 year blogiversary is this month, this means I've been writing quite a bit, well 1,379 posts were written and published. Today, facebook memories reminded me of another anniversary, a  message from Laura Prescott, a friend who wrote me 11 years ago today, "Hey, Barbara! Nice to see you at the FHL today!" For those not into genealogy, the FHL stands for the Family History Library in Salt Lake City. That message prompted me to write this, because I wasn't sure how to begin.

This post is for the 1,500 subscribers (email or followers) who might be wondering why I haven't written in five months. I could say I ran out of topics, there are too many critics, not enough time or any other reason. All true, but I decided to write today because I want to share some memories pertaining to genealogy...just remembering I was in Salt Lake City 11 years ago, researching to my heart's content, did the trick.

During the past 1 1/2 years, I stepped away a bit from doing genealogy research. (Reason to be explained below.) However, I managed to find ancestors in a local cemetery, tour three historic houses, visit libraries and connect with two first cousins! Eventually, I will write about these topics and several topics about the city I live in, Lowell, Massachusetts. 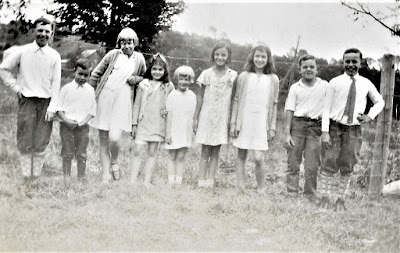 Both first cousins, each from a parent's line, sent me quite a few family photos I've never seen. The photo above is of my mother, 3rd female from the right. Her sister is in the group along with their cousins. This snapshot was taken in Dunham, Quebec, Canada, where my mother's mother, ancestors and above cousins lived.

My top 9 blog posts as determined by google. These posts are listed on every post page, and may change when figures move up or down.

ThruLines, and Wrong Assumptions
Surname Saturday -- LAY (From Connecticut to Vermont to Michigan)
Lexington, Massachusetts -- One monument with 77 Names
Open Doors Lowell, My Favorite Time to Visit the City
First Settlers of Newbury, Massachusetts
Four Movies Made in Lowell
Founder's Monument -- Watertown, Massachusetts
There is A Lot to Like About Lowell
What Does a Family History Center Look Like?

The 30 year anniversary pertains to the number of years I've been doing genealogy. My two early blogs were about my job at the DAR (Daughters of the American Revolution), located in Washington, DC. In this building, I quickly got hooked on genealogy. Not only did the DAR have one of the most beautiful and largest genealogy libraries in the United States, but they had a staff of certified genealogists, which not all libraries have. You may read 10 posts, in my blog, pertaining to the DAR or the two about my job, posted below.

The 50 Years Before and After part of the title has to do with my husband. We began dating in 1969, our first big date was a train trip to Boston on March 9, 1969 to see the Boston Celtics. I got two great autographs on that day. See my post: Celtics Coach Red Auerbach....I Met Him, What did I Get? 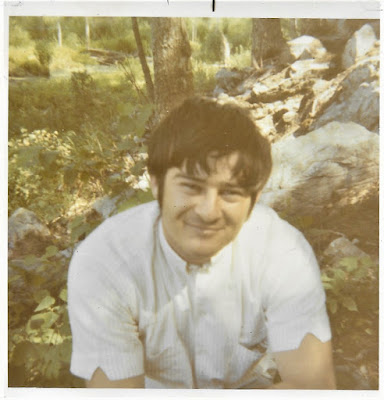 The before photo taken July 1969. We took a walk in a Dracut, MA park. We didn't marry until many years later. Once married, we've had almost 25 years to share our genealogy love, by going on research trips like Salt Lake City, Washington, DC, New England states, Canada, and numerous libraries, conferences in the past (NGS and FGS), belonged to several genealogy clubs, visited at least 60 cemeteries, and took at least 100 day trips to the NEHGS library in Boston. He took to learning information about DNA, much quicker than I did, as shown below. 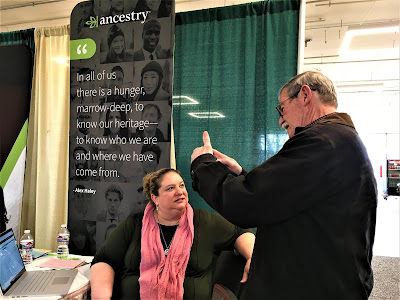 In April, Bill explained something to Crista Cowan, of Ancestry.com.

More recently, his health took priority over my genealogy research and his. A year a half year ago, he was diagnosed with lung cancer and has been treated for it for over a year. Remained quite healthy, walked every day and worked every day through the treatment until he retired May 1st of this year. Four months later, on Friday, September 13th, he was taking another walk, when his leg gave way, two houses away. Neighbors found him on the street and called an ambulance and I was quickly notified. He was hospitalized and had many tests. The next day, we got the results. 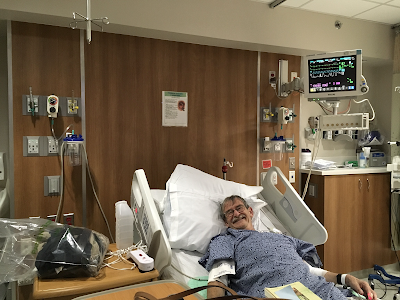 This photo was taken September 16, 2019. The day before his brain surgery, he had a 6"  incision on the back of his head, now completely healed. He is learning to walk, and it's a long process. We look forward to future genealogy trips, near and far. Genealogists know how important this is to us.

UPDATE: On March 1, 2020 Bill took another walk in our neighborhood, and fell in front of the house next door. Our neighbor saw him lying face-down on the street, grabbed him and brought him to my house. A 911 call was made immediately. Like the other fall, he didn't have a concussion nor was in pain. He spent a few nights in the hospital and never needed an aspirin or anything stronger. His glasses fell off but didn't break. Like last fall, he now has a team of therapists and a nurse coming to the house several times a week. He is learning how to walk and work on coordination again, the second time in less than five months. He is improving, I can tell because he wanted to iron, and lend a hand with his laundry. He continues to be a serious reader and follows all the news. His face is completely clear with no evidence of a fall. 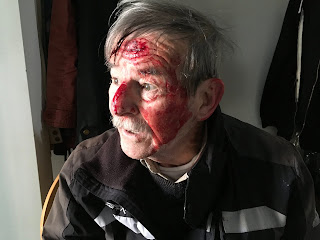 Waiting for the ambulance in our house. Stunned, I think. 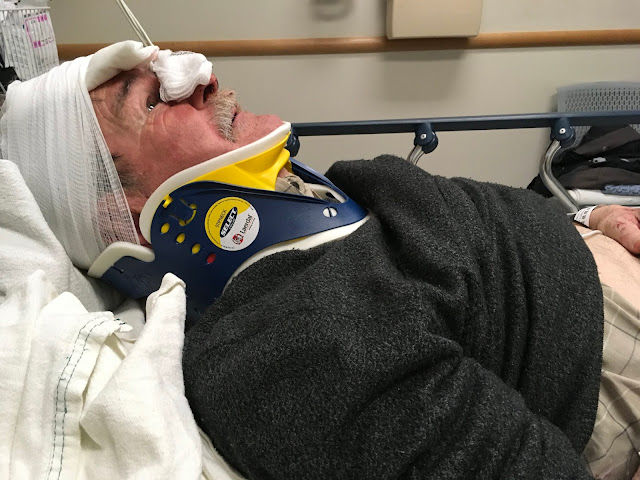 Labels: Blogiversary
Email ThisBlogThis!Share to TwitterShare to FacebookShare to Pinterest