ThruLines, and Wrong Assumptions Brought my "Brick Wall" Down


Last week during the huge genealogy RootsTech conference in Salt Lake City, I listened, from home, to Christa Cowan, of Ancestry.com give a presentation about new tools to use for doing genealogy research. One genealogy "toy" was called ThruLines, and I began checking out my tree immediately. This tool uses your tree and DNA then matches you up with others who share the same DNA and similar trees. I'm not sure how many of my ancestors came up, but there were about 98% correct ones. The match-ups appear as small cards with the name and dates, then you click on them to find more information (samples below). I had four that surprised me because I entered them purposely in my tree about 25 years ago. You see, my 3nd great-grandmother was Almira Richardson, and she was adopted by John Bryan and Mabel Clark.

This post was rewritten several times because over four days, I kept finding different information through research. The most important thing to me, and a suggestion to you, is to be sure you have no assumptions.

My five assumptions were all wrong:

I assumed ThruLines was wrong, because the names of Bryan were shown to be my 4th and 5th grandfather, and not Richardson. How could that be?

I assumed Almira was the daughter of Ebenezer Richardson, because he names her in his will as a daughter, and states she is the wife of Aaron Kilborn (this is correct).

I assumed John and Mabel (Clark) Bryan were the adopted family, based on a church record stating, "Almira Richardson adopted daughter of J. Bryan."

I assumed her father, Ebenezer Richardson and mother (unknown name until yesterday) had to have died, because Almira was adoped at the age of 16-17 yrs. of age.

What did I do?

Instead of dashing off a letter to Blaine, Christa Cowan or Ancestry.com to complain, I decided to research because now had a few clues through the Bryan and Clark ThruLines. I learned that there were 3 Clark daughters, one was my 4th great grandmother, (but who was she) and the other two were great aunts. I had no direct line through my 3rd great grandmother, but I had DNA through my great aunts, and both of them had a Richardson female as a descendant. Once I saw the surname Richardson, I dug deeper into that line.

I found Almira's father's will, but there were questions. He didn't die young (he died in 1826), so, Almira wasn't an orphan. She was among 8 daughters and 5 brothers, and now I discover that Mehitable was her mother in that will.  But through more research, I discovered I was wrong again, and I knew it because the DNA didn't match mine (I have no DNA through the father, but a little through the mother).

I did a triple look at the Records Relating to the Church and Congregation in the Parish of North Milford, 1804, Book II A. Page 10 shows the record of marriages solemnized by E. Scranton.  "1820, April 6, Almira Richardson adopted daughter of J. Bryan." I took that statement to mean Almira was a Richarson and was adopted by J. Bryan. But yesterday I read that it meant, she was Almira Bryan and adopted by a Richardson. (This record was found at Salt Lake City about 20 years ago.)

Below are my four ancestors who showed up in my ThruLines. Unhappy at first, but very glad I solved my old "Brick wall" and for those who have read my blog over the 9+ years, I no longer am offering $100 for somebody to solve this mystery for me. 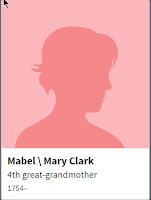 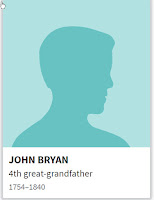 When the above names appeared and I got over being shocked, I knew this could be a story, so I named first draft of this post, "Use the Wrong Name, You Might Get the Right Information."
Well, wrong names CAN point you into the right direction! The above ancestors are mine. 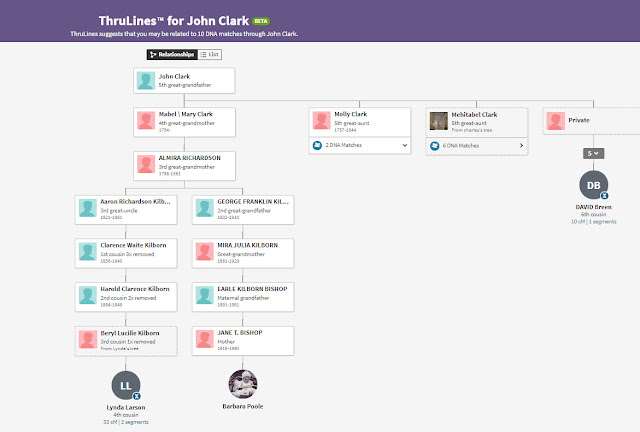 After I "solved" who my male Richardson ancestor was or more accurately wasn't, I went back to these two charts (above and below), and saw that Mabel Clark Lines (below) is my 5th great-grandmother, and daughter Mehitable Clark is my 4th great-aunt. 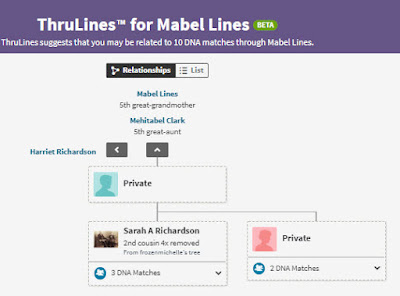 In the paragraph below, assumed father, Ebenezer Richardson named his 13 children, 8 daughters and 5 sons. One was names Myra, which is a nickname to my Almira.

My wrong assumptions were based on these two proofs: 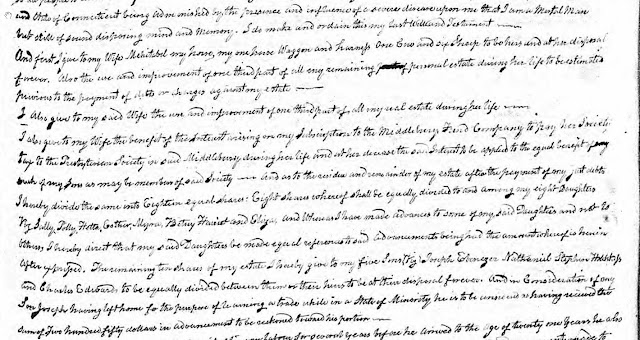 The eight daughters and five sons were named in the will (above).

"Myra the wife of Aaron Kilborn" (above.)