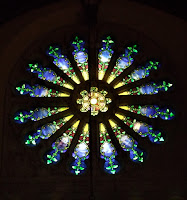 When I read of Ms. Dorothy Ann Koenig’s passing a few days ago, from the California Genealogical Society and Library facebook page, I knew I had to write something about Dorothy.

Let me take you back to how and when we connected. Fortunately, Dorothy replied to a query on RootsWeb in 2001, and I found it in November 2008, when I was looking for some information. Her email didn’t work for me, and I was determined to find her so, how did I get it? I am sharing some of our letters to give you insight into what a wonderful generous lady she was. If you’ve never written a genealogist for help, you might be missing out. She helped me solve a major brick wall, the ancestry of my 3rd great-grandfather, I couldn’t have had a better person to guide me along. Dorothy will always be in my heart and memory for as long as I do genealogy, so, in other words, a very long time. I'm sharing some of our letters, and you can see the fun we had.
11/14/08

Back in 2001 you replied to several RootsWeb queries and sourced the book, "A Genealogy of the Reyniersen Family" and that is the purpose of my email to you. I can't locate it in my area (Massachusetts) and wondered if you had a personal copy of it?  My line is, I believe, Simon Anderson, then his son George who married Violetta Ten Eyck.

I do know the book is in Salt Lake City, but as is always the way, I was there three weeks ago, but then, didn't know that Anderson was in the book.

On another note, I see we both know Steve Danko, as a matter of fact, he gave me your email, as the 2001 address didn't work and this email was returned to me.  Thank goodness for your name + genealogy I found you through Google and Steve.

When you wrote the below, is that all that there is in the book that pertains to the Anderson line?

Dorothy, you wrote to Rootsweb stating:
"-- The authors list 6 children for Simon Anderson and Mary Van Anglen; the dates are birth dates:

The next day, she wrote back

Dear Barbara,  I'm glad that you were able to locate me!  The book in question is "A Genealogy of the Reyniersen Family", by Peter M. Rinearson and Arthur P. Rynearson published in 1997. It is page 67 that has the information about the family group of Simon Anderson and his wife Maria/Mary Van Anglen. Maria was the daughter of Cornelius Van Hengelen and Sarah Reyniersen.  Simon was the son of George Anderson and Mettie Van Wickle (sic). The birth and death dates for individuals in the family are given.  For your George (the son) the birth date of 8 March 1796 is given. He was baptized on 3 April 1796 in the First Dutch Reformed Church in New Brunswick, NJ.

These New Brunswick baptisms have been published in the Proceedings of the New Jersey Historical Society. I can confirm that little George's baptism took place on 3 April 1796. The parents' names were recorded as "Simon Aderson (sic) and Mary Van Hengler.

If you want to email me your postal address, I will xerox the page from the Reyniersen book and mail it to you so that you can have all the dates and places.
Dorothy

The book has 660 pages of rather small, dense print. I will be happy to look at the information you have compiled on your George, son of Simon. Try as I might, I was unable to open the "X-Attachment-Id: 330@goomoji.gmail" in your last message.

I use a Macintosh computer. Is there a way you could append a "normal" attachment or imbed your timeline in the body of your next email message?

I am the editor of a genealogical quarterly, "New Netherland Connections".  When the Reyniersen book was published on 1997, one of the authors contacted me, and I immediately purchased a copy. I guess the print run was rather small, and now I own a treasure :-).
Dorothy

From:  Dorothy Koenig
Dear Barbara,  Yes, I think you are on the right track.  My basic impression is that your George Anderson, son of Simon, either didn't know exactly when he was born OR that as time went by he exaggerated his age. The ages of George and his siblings as presented on page 67 of the Reyniersen Genealogy come from a handwritten copy of a family Bible record. (See pages 831-833 of volume 2 of "Genealogies of New Jersey Families" [1996]). The whereabouts of the original Bible is unknown today:

There is more on the earlier generations of this ANDERSON family on pages 371 and 372 of the same volume.

"Simon Anderson, of Raritan River, Somerset County, yeoman, will of. Wife, Mary, use of real estate and residue of personal estate, while my widow; should she marry, then 30 Pounds yearly, during her life. Sons, George and Cornelius, lands whereon I now live that my father bought of Albert Voorhees (325 acres). Son, George, negro man, Nene, my silver hilted sword, silver watch and 6 silver tea spoons. Son Cornelius, negro man, Will; should he die underage and without issue, 1/2 of his share to my son George, and the other half to be divided among my daughters.  Daughters, Martha and Sarah, each 250 Pounds. Daughter Dinah, 300 Pounds; should she died without issue her share to be divided between all my children. Sons, George and Cornelius, cattle and farming utensils.

There is something particularly poignant about this will when you consider that Simon Anderson's two sons -- George and Cornelius -- were only about 10 and 7 years old when their father wrote his will and died.

What exact volume and page of the "Somerset County Historical Quarterly" shows the first marriage of your George Anderson to Violetta Ten Eyck?

I definitely think you are on the right track!
Dorothy

Did you hear me scream with joy?

I would like to pay you a little something, say $10, for your time and wonderful input. Also for copies of the 3 sources you mentioned below. For some reason, I tend to think you have the other books as well.

This morning, I was looking at your New Netherland Connections books through the NEHGS site, how easy it that, on a cold Sunday morning. The first volume explains what New Netherland means, I never knew, and always wondered. And, my TenEyck line, I always thought they were Dutch, but similar to your example (but in reverse), later discovered that they were German.

Do you think Anderson is a Dutch name? Of course what was written about the family in the Genealogies of New Jersey Families, may give some information on that.

You asked me about Violetta and George's marriage, the below came from Mary Hobein.
"Somerset County Marriages (Somerset Co. LDS microflim 1023875 also in Somerset County Historical Quarterly)
George Anderson and Violetta Ten Eyck Nov 31, 1816 (John Boggs)"
And from a webpage (person contacted, but no reply) Alletta Teneick (daughter of Jeremiah Teneick and Jane) was born September 22, 1797, and died 1840 in Dane Co., WI. She married George Anderson on November 28, 1816.

NOTE: If you would like, you could scan the pages instead of mailing them. But, I would like your address anyway.
You have really helped me, I had no idea who I was writing to at first. I gather you know Henry Hoff?
Again thank you.
Barbara

I am not a professional genealogist, i.e. I don't accept money for what I'm able to do. But I will be happy to xerox the sources mentioned. I will need your street address!

I have the highest regard for Henry Hoff. I have worked with him, talked to him over the phone, but I have never had the pleasure of meeting him in person.

I'm glad you had an occasion to scream with joy :-).

Dear Dorothy,
The envelope arrived yesterday, what a nice surprise. Of course I tore into it, and got to reading it immediately. I liked not having to wait until Monday for it as well. Thank you so much.
What an undertaking to do such a large book of 600+ pages, and then a second book. For now, I will wait on writing Mr. Rynearson, as I know the book will be at least $60 or more. Of the four libraries that I contacted, the first two replied with a no, but one said yes, and the other NYPL said to send request to another place. So, I will continue with the inter-loan process for now.

You will be receiving a little thank you from me, it goes out tomorrow.
I've enjoyed my time with you these past two weeks. I usually do all my own research myself, but in this case, it was almost a necessity to have help from you. Thank goodness I found you!

That was fast! I am glad that your curiosity has finally been satisfied, and now you have all those collateral lines to research as well. It's been a pleasure for me too.  Dorothy

Many thanks for your thank you note with the enclosed postage stamps. It was a very thoughtful gesture and just the right touch!  Dorothy
(I believe I sent her $25.00 worth of stamps.)

My reason is because since November 2017 to May 2018, I received no comments, but upon investigating I found that I had indeed received 167 legitimate ones and 1,000 were in the spam folder. Google Blogger had made some changes that I was unaware of.