Will for Samuel Griffin, my 6th great-grandfather.

In the name of God Amen I Samuel Griffin Essex in the County of Chittenden in the state of Vermont being weak in body but of sound and of perfect mind and memory do make and publish with this my last will and Testament in manner and form following That is to say I give to my Beloved wife Mercy Griffin all my Household furniture during her life with other possessions hereafter mentioned -- I give to my son John my farm on which I now live together with my Cattle Sheep and Swine also my tyme peace and loom on the following conditions viz He is to support my wife during her life and provide and furnish her with all things necessary for her Comfort and Convenience he is to pay all my debts that I shall owe at my decease he is to pay sixty Dollars to my three Daughters viz Twenty to Lois Kelsey to Polly Dowd and Twenty to Azube Davis My son John is to pay the aforesaid sum to my Daughters in one year after my wife's Decease and he is to have my Farming  utensils -- my Carpenters and Joiners are to be equally divided between my five sons, viz Joel, Asahel, Samuel John and Dan after my wifes Decease her wearing apparel is to be given to my daughter Mercy Pelton and the remainder of my Houses hold furniture is to be divided as follows. Samuel and Dan are to have Each of them a bed and bedding The remainder is to [be] equally divided between my five sons above Mentioned excepting my son John lastly as to all the rest residue and remainder of my estate whether real or personal of what name or nature I give to my beloved wife Mercy Griffin whom I do appoint sole Executrix of this my Last Will and Testament Thereby revoking all other Wills by me made In witness whereof I have hereunto set my hand and Seal this 16th of May in the year of our Lord 1808. 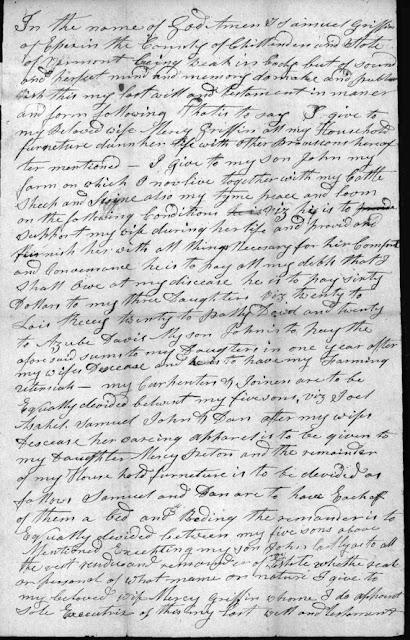 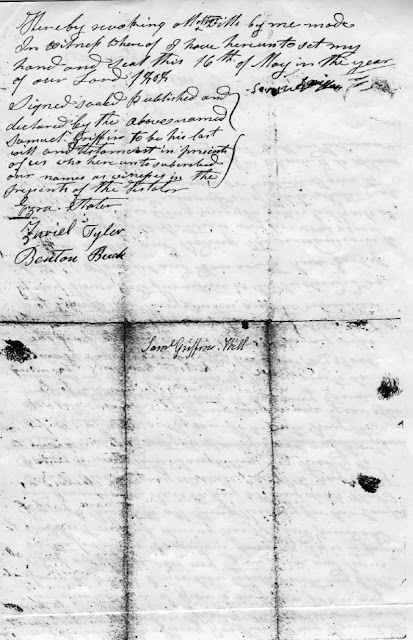 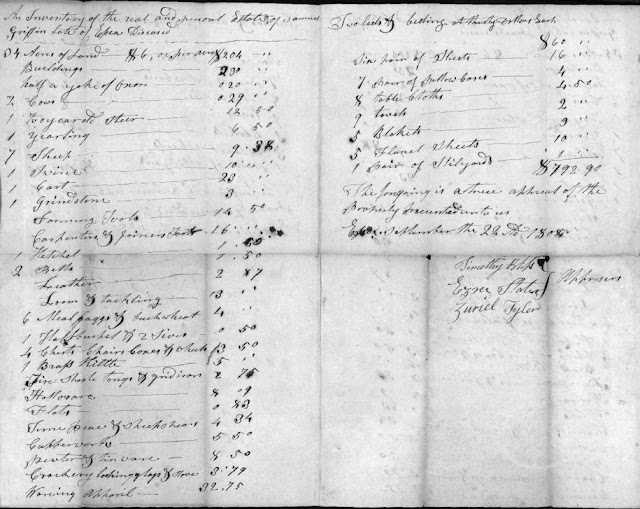 Copies received from Joan Kaysen in July 2006 and Bradley Griffin in October 2009. Both are distant cousins, and it's taken me this long to discover I had two copies, and this long to transcribe it.

Amanuensis Monday was begun by John Newmark of the TransylvanianDutch blog. The term means, "a person employed to write what another dictates or to copy what has been written by another." Many bloggers enjoy doing this because it allows them to freely copy something that has been written.