When I posted my Top Ten Brick Walls, I should have mentioned that I realize $100 to solve a break through was a small amount. I could pay more, because I know the time and energy it would take to do it. Especially since I've spent years working on them.


Thank you all for the wonderful comments on my one year Blogiversary. If I ever want to remember what I did this past year, well that is my answer, I actually had a blog.

This month was pretty good for picture taking. Yesterday, I shared my day in three cemeteries, they were: Mount Auburn in Cambridge, MA (2), Lowell Cemetery, Lowell, MA and West Parish Cemetery in Andover, MA. Photos from all three (in order) are below. Yes, these are from cemeteries, although they look like parks. 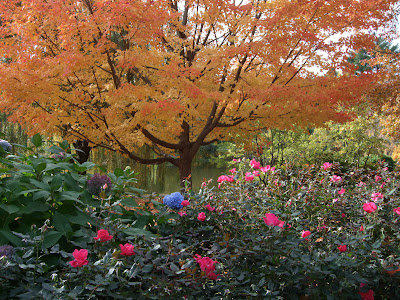 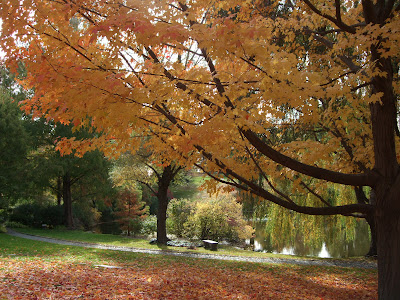 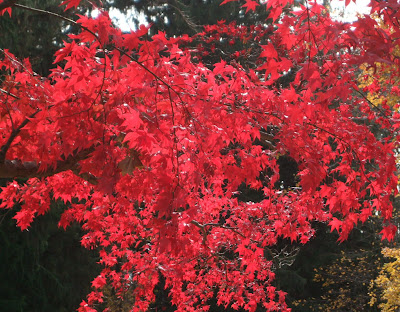 Labels: Looking Back
Email ThisBlogThis!Share to TwitterShare to FacebookShare to Pinterest


Obituary for Charles M. Farmer (see copy below)  Brenda Leyndyke of Journey to the Past was helping me with some research and found the following obituary at a library close to her home. Charles was my 2nd great-uncle, and son of Alexander Farmer, discussed in my Top Ten Brick Walls post.

Newspaper article was dated June 6th and stated he died the evening before, June 5th.

"ANOTHER SUDDEN DEATH.
Apoplexy Claims Another Resident of Our City.

For the second time within a few days, apoplexy has claimed a victim from this community.

After supper last evening Charles M. Farmer, of No. 126 Hart street, who had been engaged at his duties in the Nichols & Shepard Co's shops all day, went into his yard to trim a couple of trees, had finished one and had taken three or four steps up the step ladder he was using to reach the branches of the second tree, when he was seen to totter backward and fall to the ground.  He was picked up in an unconscious condition and carried into the house and a physician summoned, but he was beyond human aid and died about an hour after.

The physician pronounced the case one of apoplexy, and through the fall may have hastened death, slightly, it was not the fall which caused the stroke as he was evidently stricken before falling.

The deceased leaves a wife and one son, who have the sympathy of our entire community in the sad affliction which has come upon them.

The funeral will be held tomorrow at 3 o'clock p. m., from the West Leroy church, friends meet at the residence at 12 o'clock.  The interment will occur at the Kelsey cemetery in Leroy." 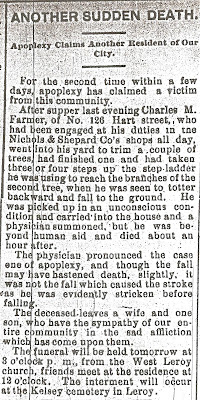