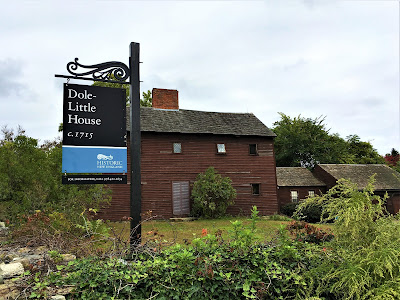 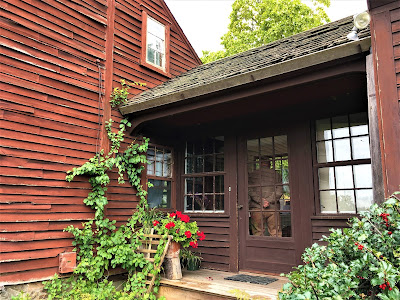 I had to wait all summer, June 3 to October 6, 2018 to tour this house, because it is only open to the public twice a year. We were lucky enough to get a parking spot, because there were a lot of us anxious to get inside. It isn't the most beautiful or historic of houses, but we wanted the thrill of seeing inside.

It isn't like other houses, mostly because there are no original furnishings nor belongings inside. There is sketchy information, but it had character. It looked like it needs a lot of work to bring it up to snuff; a new roof, a major paint job would have improved the appearance. Also, new period windows. A new owner purchased the house in 1954 and it "was restored to a year later to reflect original period." "The paneling from one chamber was removed and reinstalled as an exhibition room at the National Museum of History and Technology in Washington, D.C." (From flyer below.) 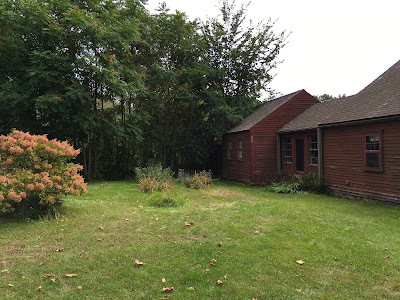 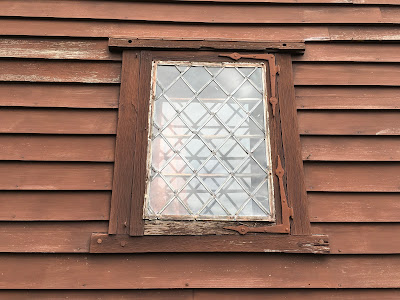 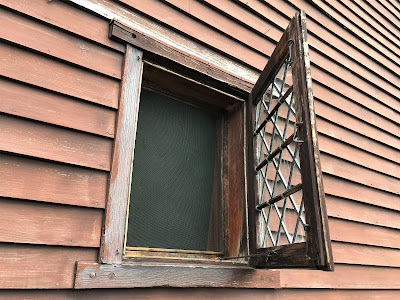 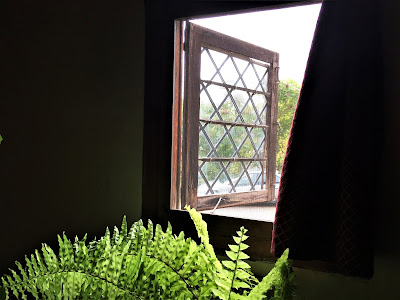 I loved the size and shape of the windows, so I took plenty of photos, as well as one huge chimney in the middle of the house that was cutout into four fireplaces, two large ones on the first floor, and two smaller ones on the second floor. We were told that the base of the chimney in the basement takes up almost half the cellar. If you look at the first photo, you'll only see one chimney. 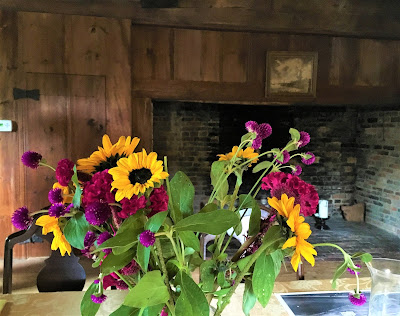 The first room was furnished for the caretaker and is his dining room. Of course, I couldn't resist some color, it was quite dark in there. 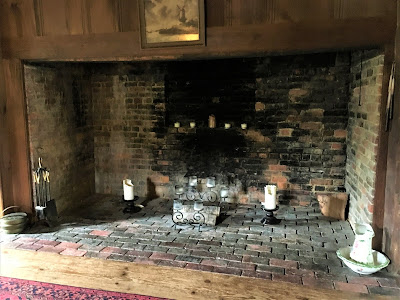 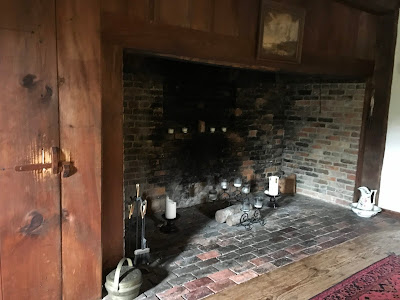 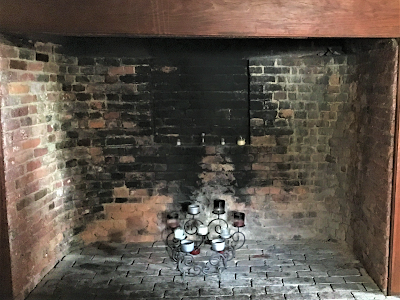 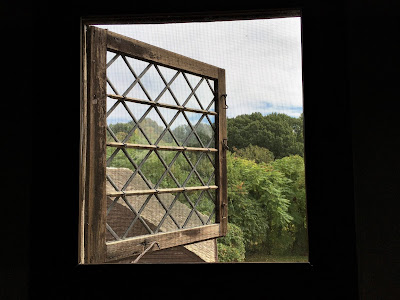 Oh yes, another window with a view! Good thing the weather was warm. 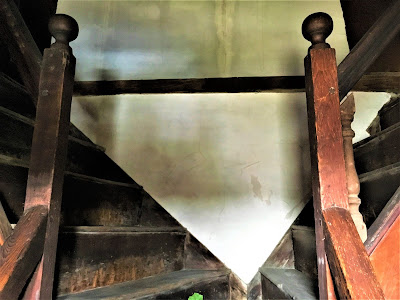 There is a double staircase leading to the third floor. Glad we didn't have to go up there. 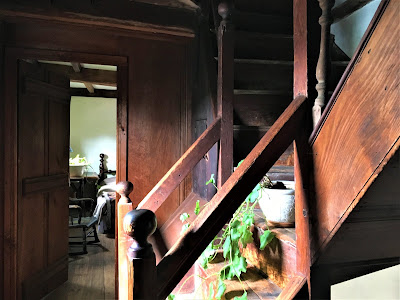 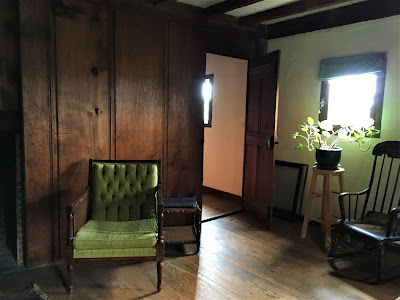 Example of 2nd floor room, see what I mean about the furnishings. 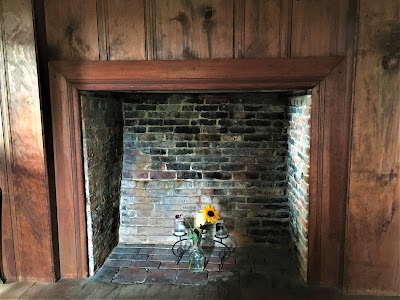 Two additional fireplaces on the second floor, much smaller in size. 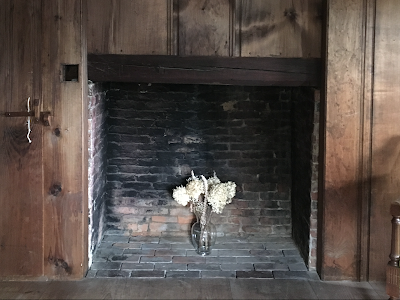 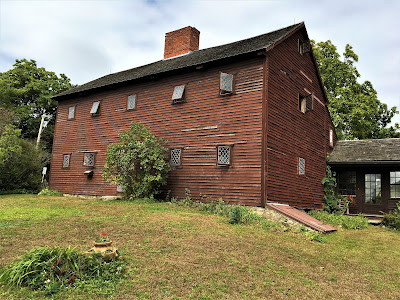 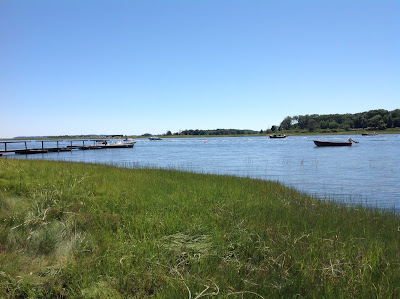 Parker River, in front of the house, as shown below. 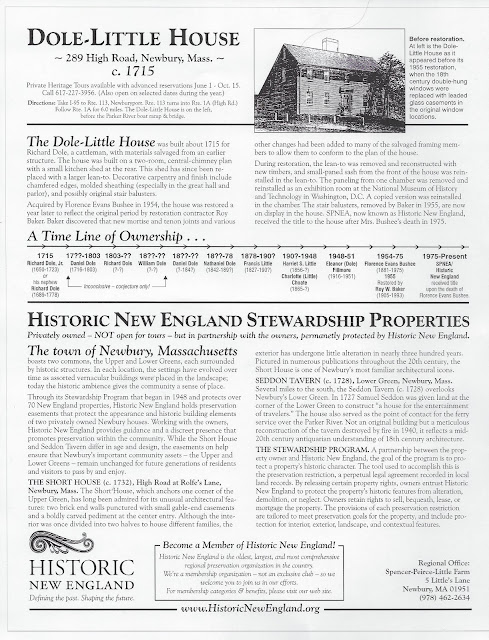 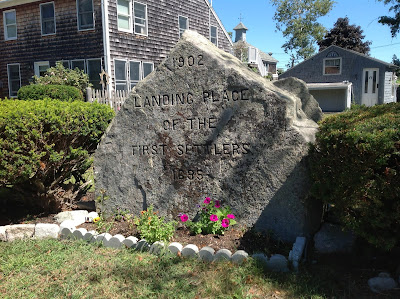 Located a short distance away on another street, is this memorial.

For those who have interest in Newbury, here are a few posts I've written:

Where the First Settlers of Newbury, Massachusetts Landed and Lived (Sept. 2013)

Greetings from Philadelphia.  Got your email address via your blog, which I discovered via your blog post via New England Genealogy facebook group.  Your images of Dole-Little house are fantastic!  -- much better quality than the one I see on the house's Wikipedia page.  Requesting if Paul Noyes and I use a few of your images for Richard Dole Jr.'s profile on Noyesgenealogy.net, our family's online genealogy database?
I descend from Richard Jr.'s sister, Jane, who married my 7th g-grandfather.
I'll of course credit yourself for the images, if you allow us to use them. Great blog post btw!  Thanks for sharing!
Warm regards,
Ryan Noyes"

My reason is because since November 2017 to May 2018, I received no comments, but upon investigating I found that I had indeed received 167 legitimate ones and 1,000 were in the spam folder. Google Blogger had made some changes that I was unaware of. Please be aware that I do not know who reads my blog, I may know who subscribes, but that is all.