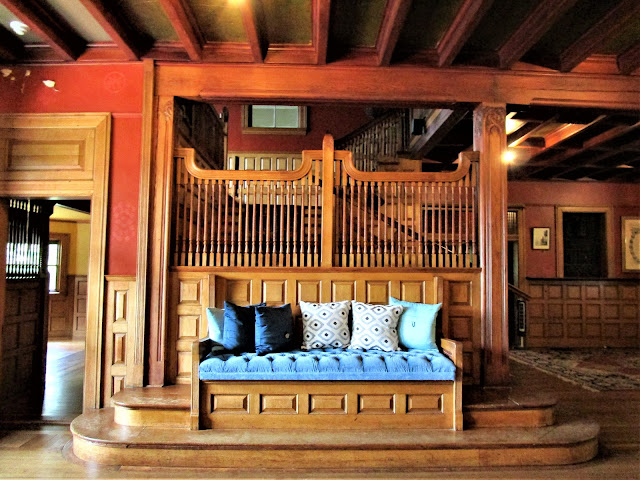 Have a seat, and look at the photos of Stonehurst, an interesting estate. In 2016, a friend wrote to tell me about this house. I'm glad he did, since I hadn't heard about it. On June 11, I toured the estate, thanks Barrett for telling me about it.
Stonehurst, The Robert Treat Paine Estate
100 Robert Treat Paine Drive
Waltham, Massachusetts 02452
Phone: 781-314-3290
www.stonehurstwaltham.org
(Quotes in this blog are from the above website.) 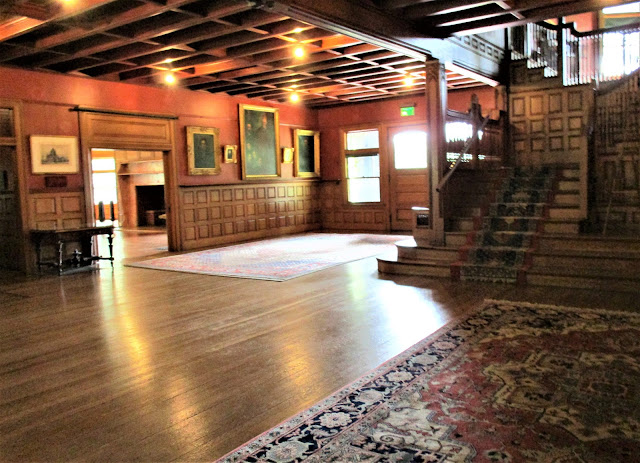 The view I saw when I entered the house. Impressive. I had been trying to visit the house, for a few years, as it isn't open very often, and not on weekends. Arrangements were made for me to tour the house on my own, and I loved walking around for a good hour. The lady who let me in, soon disappeared, and I never saw her again. I yelled at the top of my lungs to thank her when I left, but don't think she heard me. 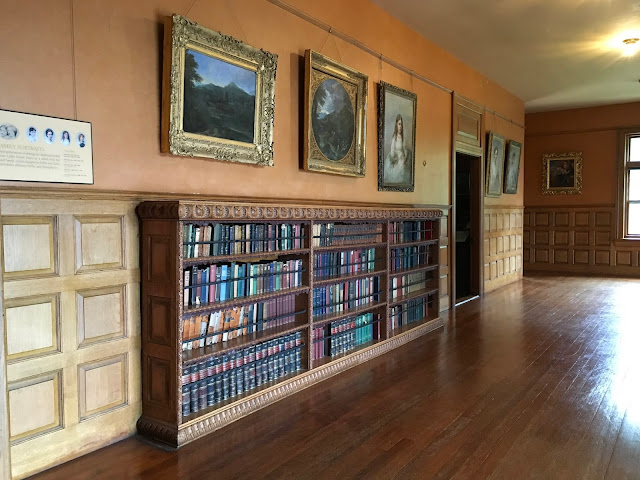 "Today, the large spaces within Stonehurst are sparsely furnished with original artwork and built-in seating in order to highlight the architecture and accommodate large gatherings of people."

"The freeflowing Richardson-designed living spaces were once a foil for the Paines' collections of objets d'arts acquired on tours of Europe and North Africa with Phillips Brooks. Exotic pieces mixed with contemporary works by English and American artists of the Aesthetic and early Arts and Crafts Movements. Robert and Lydia Paine furnished the earlier, west end of their house with traditional family heirlooms and objects purchased shortly after their marriage in 1864."


All the walls had paintings, usually family members, and there were a lot of books in several of the bookcases. 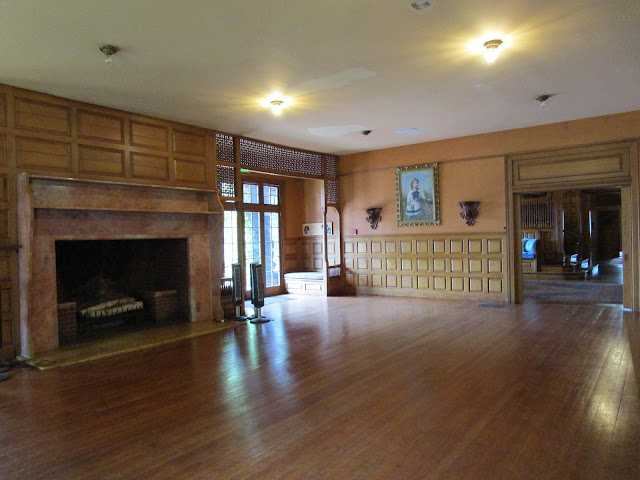 The house is perfect for special events, especially weddings. 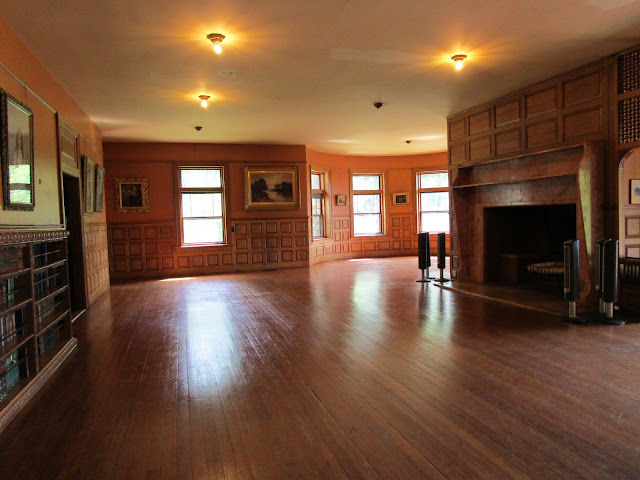 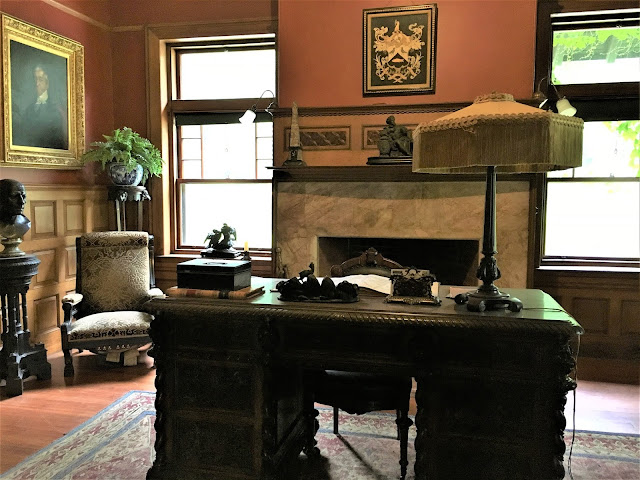 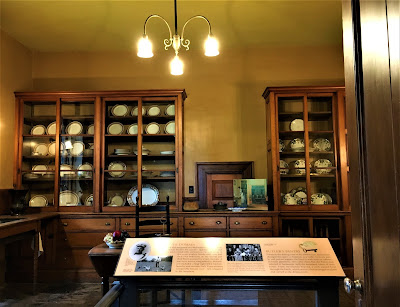 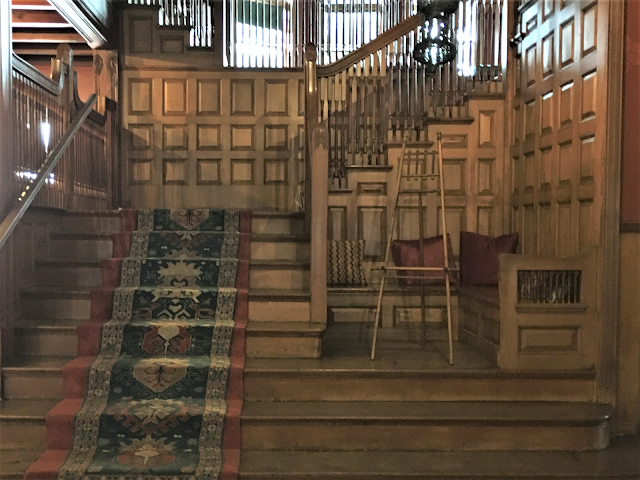 Walked up the flight of stairs, which brought me to a short landing.

Second floor with different stairwells, which led to small rooms or landings.

In the photo above, I am facing a very dark wing of rooms on the 2nd floor. I was not allowed to go into the wing on the right side. The entire area was pitch black. 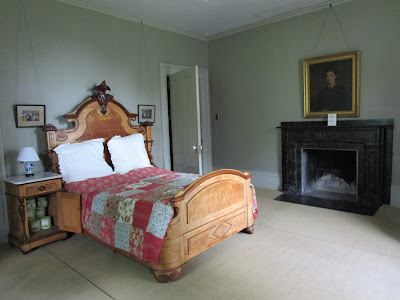 However, I was able to see 2 bedrooms, with little furnishings, and a very interesting bathroom. 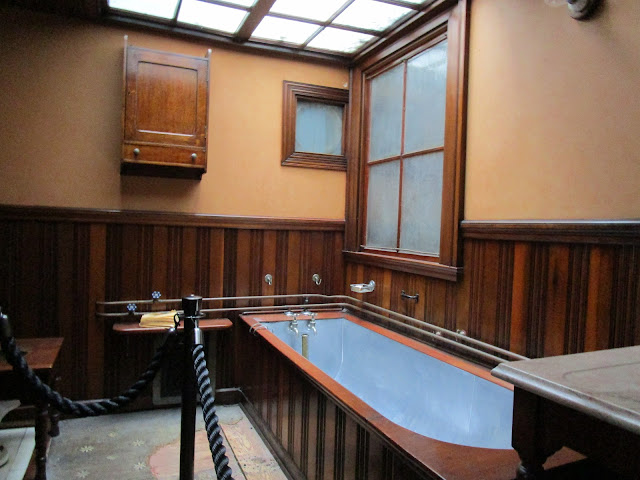 Interesting to see a skylight right next to two windows. 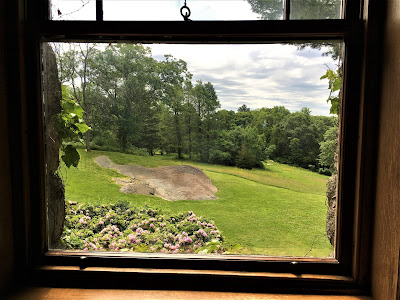 "Landscape architect Frederick Law Olmsted and architect Henry Hobson Richardson were neighbors, good friends and colleagues. Stonehurst is the crowning achievement of their collaboration, beautifully expressive of the unity of their artistic ideals." 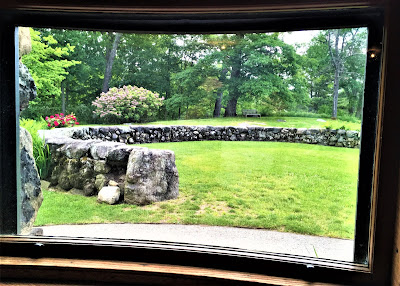 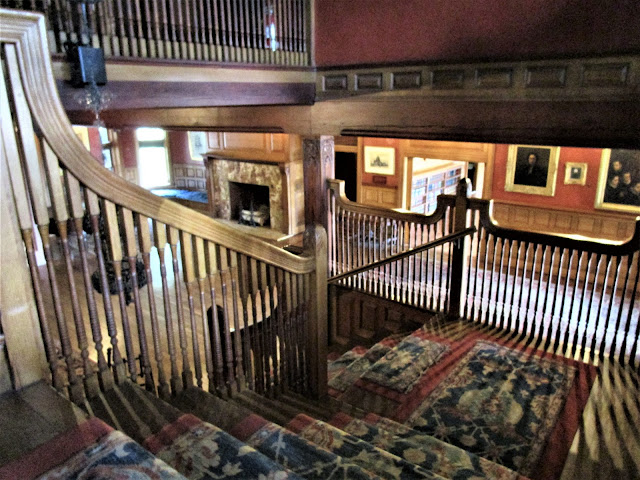 Looking down the stairs, to see the two views shown below. 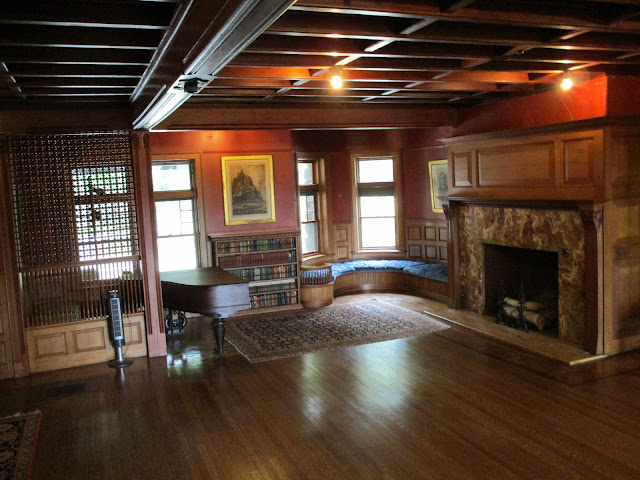 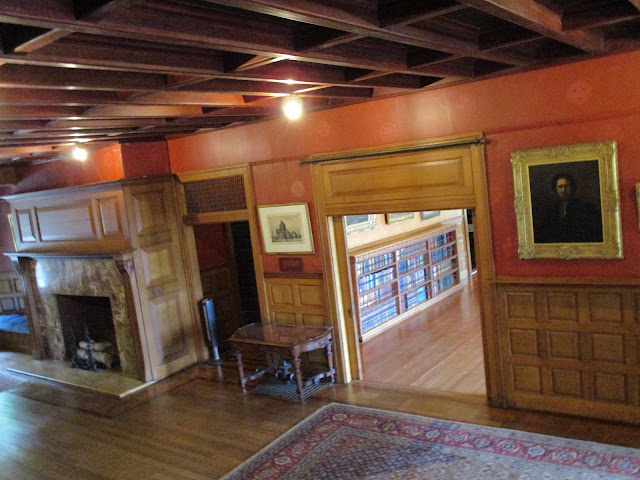 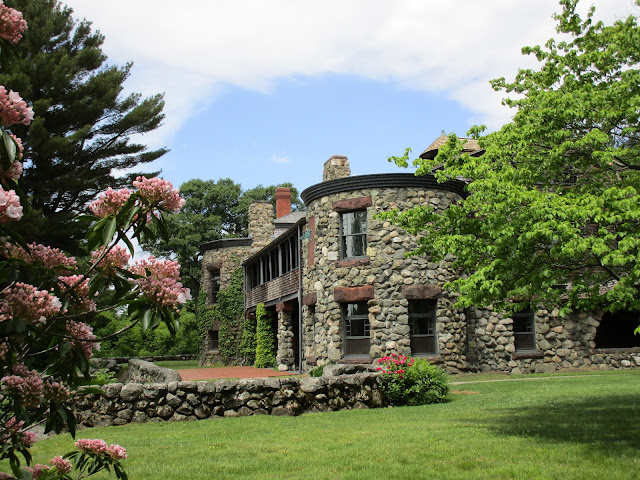 Side view of the house. 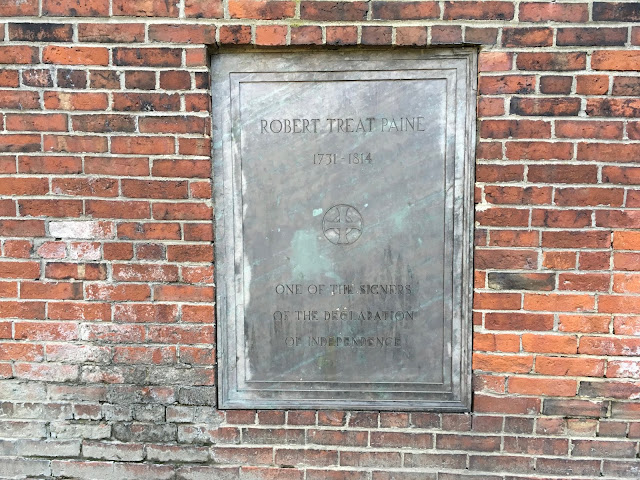 While walking through the Old Granary Burial Ground in Boston, I found a plaque for Robert Treat Paine, thinking it was for the resident of Stonehurst. It wasn't, but is for his grandfather, who was a signer of the Declaration of Independence. 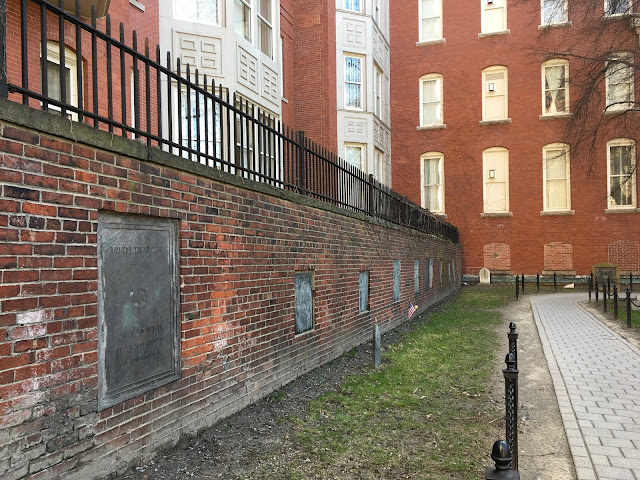 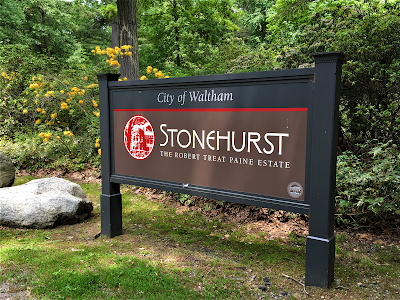 I enjoyed my solo trip, and the weather was perfect. However, there was too much sun, which got in the way with my photography. I hate windows that are washed out, and too many shadows. 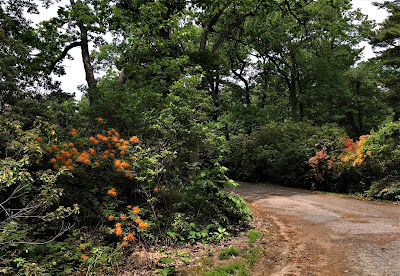 The short dirt road curves around, and was in full bloom with rhododendrons, mountain laurel and other flowering shrubs.

The house is at the end. 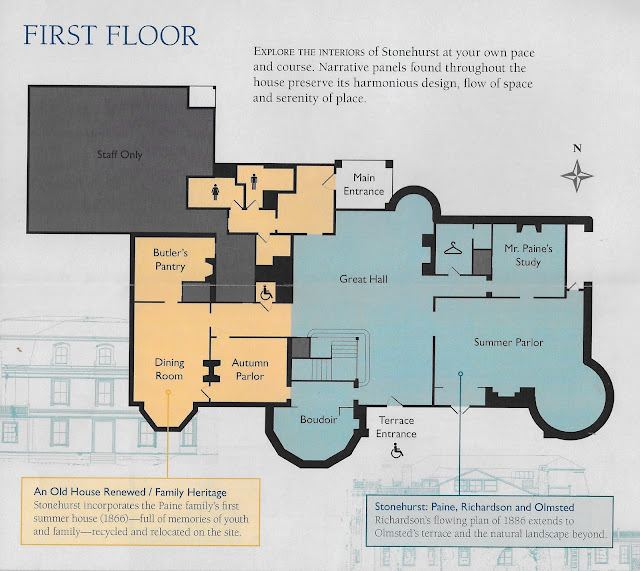 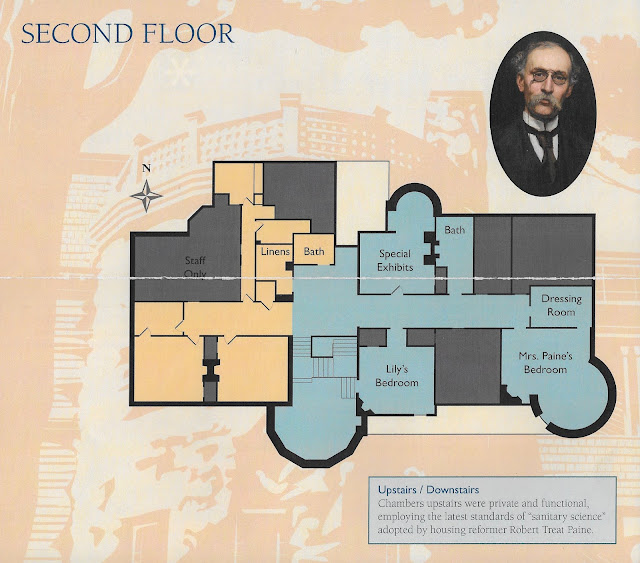 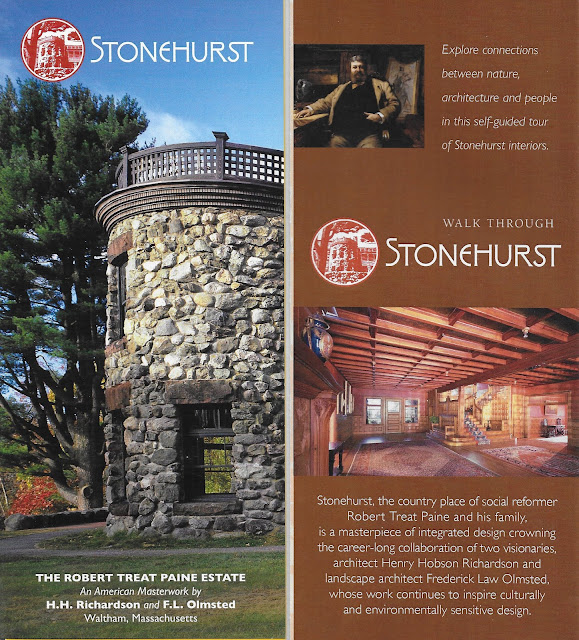 My reason is because since November 2017 to May 2018, I received no comments, but upon investigating I found that I had indeed received 167 legitimate ones and 1,000 were in the spam folder. Google Blogger had made some changes that I was unaware of. Please be aware that I do not know who reads my blog, I may know who subscribes, but that is all.
Labels: Estate, Frederick Law Olmsted, Henry Hobson Richardson, Historic House, Location: Massachusetts, Surname: Paine
Email ThisBlogThis!Share to TwitterShare to FacebookShare to Pinterest