Visiting the Boston Athenaeum where my 2nd great-grandfather worked 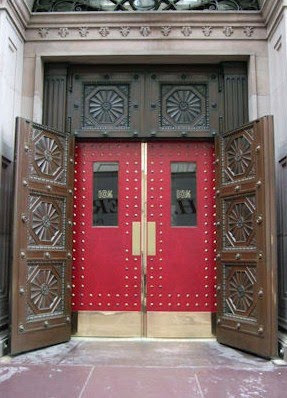 These beautiful red, leather doors greeted me as I was about to enter the Library where my great, great-grandfather worked.  For many years, I've known that he was one of the first librarians of the Boston Athenaeum, but whenever I went to the city, it was always to go to the New England Historic Genealogical Society's Library (NEHGS), and not the Athenaeum.  When the Boston Globe newspaper had an article about changes at the Boston Athenaeum, I thought I finally needed to go and visit it.  Then, a new book Culture Club: The Curious History of the Boston Athenaeum by Katherine Wolff was published and I knew I had to get the book.  Even better, the author was going to give a free lecture to discuss her book and I knew exactly when I was going for my visit, to see the Athenaeum and hear a lecture the same day!  I even managed to get to NEHGS in the afternoon. 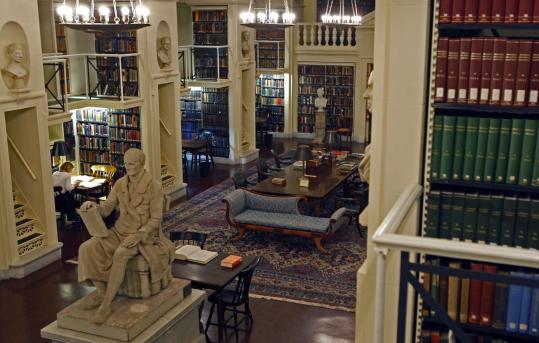 Arrangements were made for me to have a tour of the 2nd floor to see where my ancestor, William Frederick Poole would have worked. My tour was given by the archivist who was wonderful, and guided me around and showed me several things, especially things that would have been there between 1856-1869. It was fun putting myself back in that time era. Unfortunately, photography wasn't allowed, but just imagine "a wide array of newspapers and artwork, too, with paintings by Gilbert Stuart and John Singer Sargent and sculptures by Augustus Saint-Gaudens and Houdon." Lots of sitting rooms, 500 newspapers and periodicals, lovely rugs, children's Library, and peace and quiet.
Wikipedia has a lot of information about the Library, pictures, and mention of my ancestor. 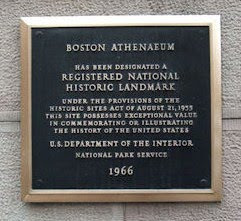 My Poole lineage began in Massachusetts in 1632, but my father was born in Evanston, Illinois. And, Evanston was also the death location of William Frederick Poole. Not until I began doing genealogy did I learn of their early Massachusetts roots, and that was a wonderful surprise.
Labels: Boston Athenaeum, Library Visits, Location: Massachusetts, Surname: Poole
Email ThisBlogThis!Share to TwitterShare to FacebookShare to Pinterest