There Were 27 Books About Witchcraft

In December 2013, I shared some parts of my 2nd great-grandfather's will in my post, Finally, What Was the Good Stuff in The Probate? I couldn't share his entire will and probate because it was 44 pages long. Three other posts were written about his will. Post #1, Post #2, Post #3.

The 4th post was written because I wanted to know what happened to the 2,600 books that were going to be sold. Specifically, I wondered if they went to a library. 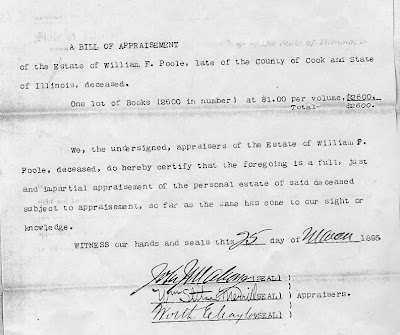 A BILL OF APPRAISEMENT

Being that William Frederick Poole was a well-known librarian, I thought his books would sell quickly. Thanks to a reader who contacted me in September, I now know how they were sold, and the titles of his 1,087 books, part of his 2,600 collection.

Ivy wrote, "I am a fellow at the Newberry library currently doing some research on Poole's Index, which is how I happened to come across your blog. I happened upon some biographical information in the Newberry Library archives regarding the sale of William Frederick Poole's books after his death. Yes, they were his personal collection, and it was quite extensive. The family tried to sell them privately, but it seems as if that didn't work out and so a public sale was held in 1900; there is a copy of the catalog of the sale in the Newberry's collection (Catalogue of the valuable private library of the late William F. Poole, LL.D., Librarian of the Newberry Library, Chicago, Ill.)" I was given the link and additional bits of information.

She wrote again saying, "If you ever find yourself in the Chicago area, I would definitely suggest looking into those files, as his notes have information about family trees and other information (they're not super organized, though!). Williamson's (wrote biography of my ancestor) records do show that he tried to get in contact with family/descendants in the 1950s to see if they had letters or other records, but he did not turn up much."

Then, I read: "I did happen to find that the sales catalog from Poole's book collection is also digitized on HathiTrust here, so you can see for yourself what books he had." http://hdl.handle.net/2027/mdp.39015020833938.

There were 76 pages of cataloged books! What were the topics? Well, the most surprising thing was seeing 27 books about witchcraft in his collection. If you would like to see the entire list, use the link above and scroll down to page 73. I'm sharing the description of two books on witchcraft, papers by Mr. Poole and his listing of the NEHGS Register (he was an early member to that society). The majority of his other books are about history. 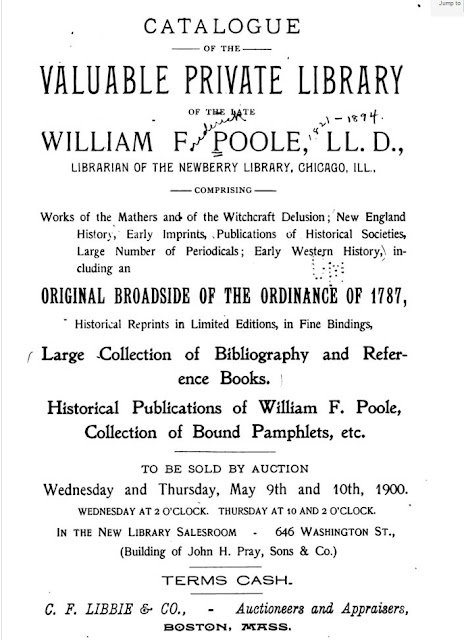 Freeborn Balch, the topic of this post, was my 7th great-grandfather. He is one of three Freeborn's in my Balch genealogy. This is another tombstone in which I needed help in locating before I went to the cemetery this summer. The photos from FindAGrave were excellent, but when I saw how huge the cemetery was, I decided to contact the cemetery. Their office was off-site, and the employee didn't seem to know the cemetery at all. She was helpful tho, and send me a map of sorts...a screen shot from Google earth. Since I didn't know the stone was on a hill, and the map was so out of focus, her help didn't help at all! 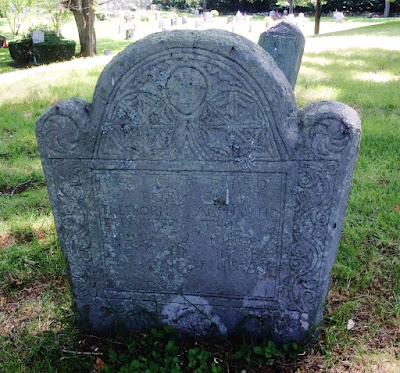 A nice sunny summer day can present problems if the stone is in the shade, as mine was. The Wenham Cemetery is in Wenham, Essex Co., Massachusetts. 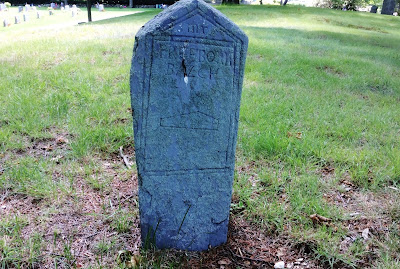 I looked for the footstone first, because I thought it would be the easiest to find. It looks tall in the FAG photo, but it turns out is was very small. Photos taken by others can be deceiving. I took a lot of pictures, and liked the black and white best. 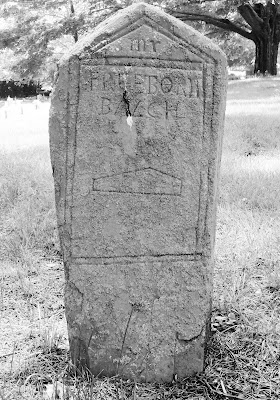 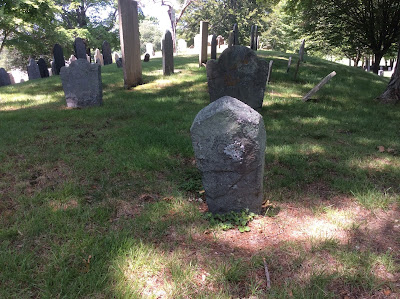 Short footstone in the foreground, behind the headstone. 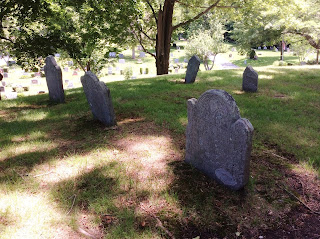 There were two other Balch stones next to Freeborn. One for Skipper Balch and the other for Sarah Balch, children of Freeborn and his 3d wife, Elizabeth Fairfie. This past weekend, I located Elizabeth's grave site in an old cemetery, in another town...a cemetery with the best of the best cemetery records. 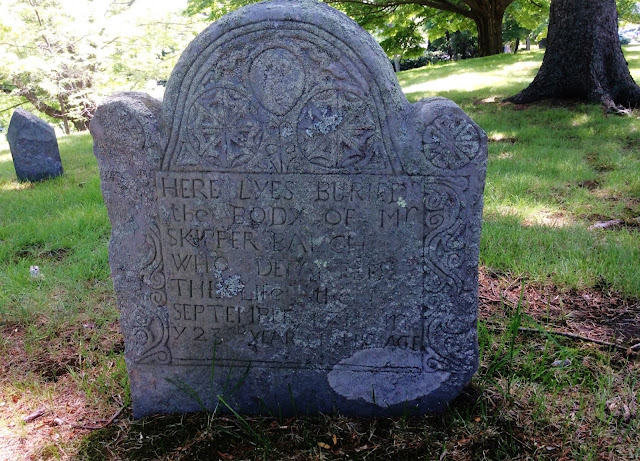 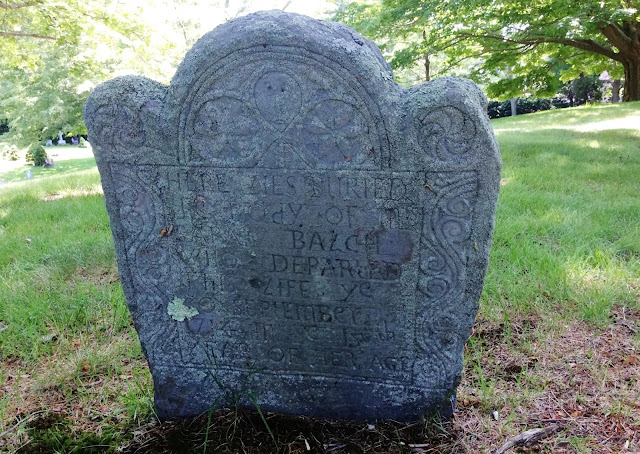 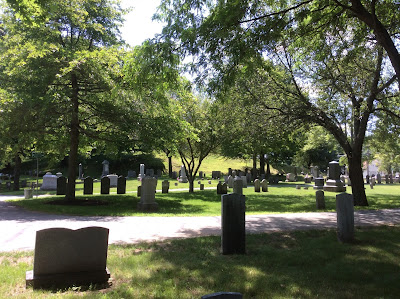 Partial view of the cemetery. The oldest stones are up the hill on the left. Below is the FindAGrave photo I used. 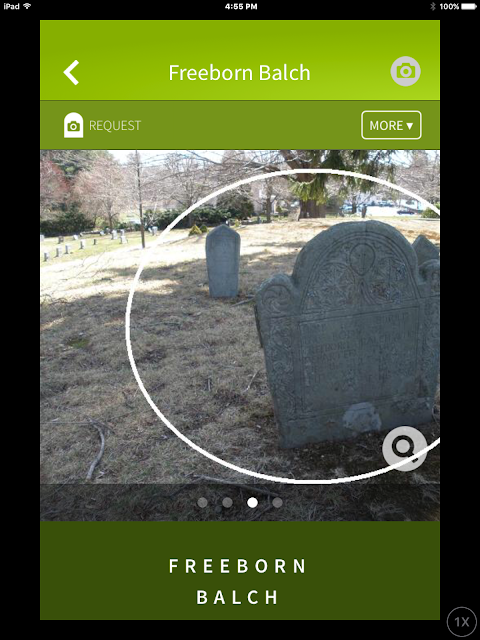 I recently found a paper written by Jack E. Hauck, for the town with the title of A History ofWenham Cemeteries. It could have helped me locate Freeborn, if I had seen this earlier because there was a pretty good map of the cemetery.
Labels: Cemetery, Location: Massachusetts, Surname: Balch, Tombstone Tuesday
Email ThisBlogThis!Share to TwitterShare to FacebookShare to Pinterest