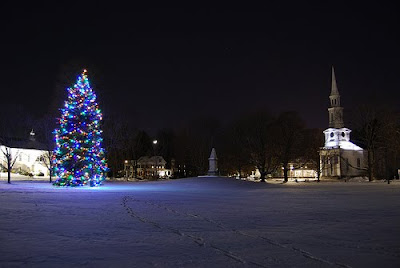 Lexington Green in Massachusetts, with the church I attended for eight years.
The question for today's Christmas Memories is, "Did your family attend religious services during the Christmas season? What were the customs and traditions involved?"

When we moved to Lexington, my parents decided to attend this Church, it is called The First Parish Church; then a Unitarian Church.  My father was an Episcopalian and my mother a Baptist, so they chose this Church.  I attended Sunday School, and my mother was a Sunday School teacher.  My father never went, except on Christmas Eve.  That was very special, because not only because we got out at night, we got to see the children's play of the Birth of Jesus.  Lots of happy people everywhere.  I think the program began at 6:30.

Below is a photo and information from the Church's website.

Our Historic Building
"In the 150 years we have occupied this meeting house, it has been a constantly changing place, expanding and evolving to meet new and changing needs of the congregation.


The town meeting house, built in 1692, was originally set on the Common. In 1713 (the year Lexington was incorporated) a new meeting house was built. This building housed small bands of militiamen and held the bodies of the dead after the Battle of Lexington on April 19, 1775. In 1794 it was torn down and replaced by a new building.

In 1846, after extensive and expensive repairs, the third meeting house burned to the ground on the night before it was to be rededicated. The congregation voted to locate the new church off the Common. Isaac Melvin was hired for $125 to plan the new building, which was to be completed for less than $8000. Pews were auctioned off to raise money for the building expenses."
Labels: Christmas, Location: Lexington Massachusetts
Email ThisBlogThis!Share to TwitterShare to FacebookShare to Pinterest