Two Andrew Ten Eycks and the 1793 Move to Canada

Two different articles pertaining to, two Andrew Ten Eycks' of Dunham, Quebec, Canada were located and transcribed. The first was was done circa 1999 by a 5th cousin and the second was done in 1941 by my grandfather. In the first article, Andrew talks about his great-grandfather Andrew Ten Eyck leaving Albany in 1793, carrying his possessions to Canada. The second article is a death announcement of the great-grandson, but there is more information about the great-grandfather than the newly departed.

"Mr. Andrew Ten Eyck has in his possession several articles of household furniture and farm implements that his great-grandfather brought from Albany in 1793, at the time he settled in Dunham.  Among the articles of interest we noticed an armchair, the history of which dates back to the early days of the colonists, previous to the Revolutionary War.  This ancient heir-loom has been handed down from father to son for five generations and is held by the family as a relic of priceless value.  Mr. Ten Eyck has a broad axe with which his grandsire hewed the logs into shape previous to building his first residence in the woods; also a red coat* formerly worn by his predecessors at the time New York was besieged by the Continental forces.  The coat is one of the "swallow tail" pattern, with the usual amount of yellow braid and gilt buttons.

The above articles are well preserved. Another memento of the past held by our worthy friend is a copy of the London Times, bearing the date of November 7th, 1805, containing a full account of the Battle of Trafalgar and the death of Lord Nelson.  The battle was fought on Monday, October 21st, the news of which was 16 days in reaching England.  Mr. Ten Eyck has also many articles equally interesting to the antiquarian and geologist, with a well kept library, containing the works of nearly all the poets and leading historians of the present age."

* I wrote about the red coat, post was titled: Was it a Revolutionary War Red Coat, or Made Before?


The above was from The Waterloo Advertiser, Friday, February 10, 1893, Waterloo, Shefford Co., PQ (National Library of Canada N-66948) -- Sent to me by Jim Johnson, a 5th cousin through our Westover line. 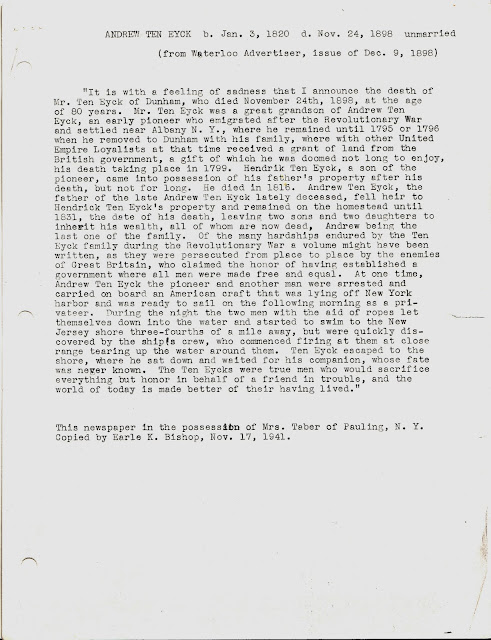 "It is with a feeling of sadness that I announce the death of Mr. Ten Eyck of Dunham, who died November 24, 1898, at the age of 80 years. Mr. Ten Eyck was a great grandson of Andrew Ten Eyck, an early pioneer who emigrated after the Revolutionary War and settled near Albany, NY, where he remained until 1795 or 1796 when he removed to Dunham with his family, where with other United Empire Loyalists at that time received a grant of land from the British government, a gift of which he was doomed not long to enjoy, his death taking place in 1799. Hendrick Ten Eyck, a son of the pioneer, came into possession of his father's property after his death, but not for long.  He died in 1816. Andrew Ten Eyck, the father of the late Andrew Ten Eyck lately deceased, fell heir to Hendrick Ten Eyck's property and remained on the homestead until 1831, the date of his death, leaving two sons and two daughters to inherit his wealth, all of whom are now dead, Andrew being the last one of the family.  Of the many hardships endured by the Ten Eyck family during the Revolutionary War a volume might have been written, as they were persecute from place to place by the enemies of Great Britain, who claimed the honor of having established a government where all men were made free and equal.  At one time, Andrew Ten Eyck the pioneer and another man were arrested and carried on board an American craft that was lying off New York harbor and was ready to sail on the following morning as a privateer.  During the night the two men with the aid of ropes let themselves down into the water and started to swim to the New Jersey shore three-fourths of a mile away, but were quickly discovered by the ship's crew, who commenced firing at them at close range tearing up the water around them.  Ten Eyck escaped to the shore, where he sat down and waited for his companion, whose fate was never known.  The Ten Eycks were true men who would sacrifice everything but honor in behalf of a friend in trouble, and the world of today is made better of their having lived."
Labels: Location: Missisquoi Co. Canada, Location: Quebec Canada, Obituary, Revolutionary War Ancestors, Surname: Ten Eyck
Email ThisBlogThis!Share to TwitterShare to FacebookShare to Pinterest