There Is A Lot to Like About Lowell -- The City Seal of Lowell, Massachusetts

The City Seal
"Art is the Handmaid of Human Good" 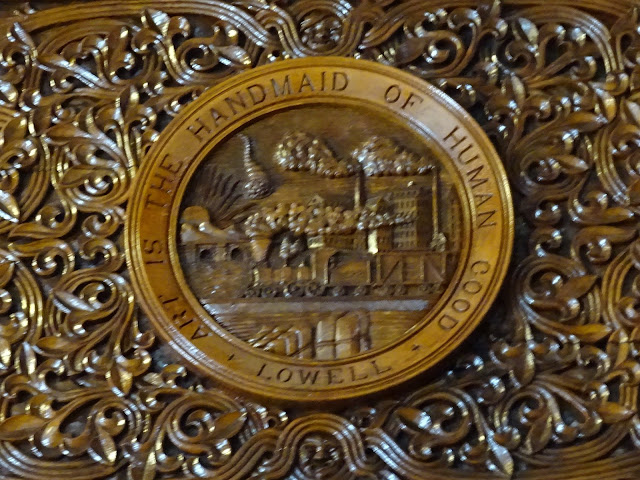 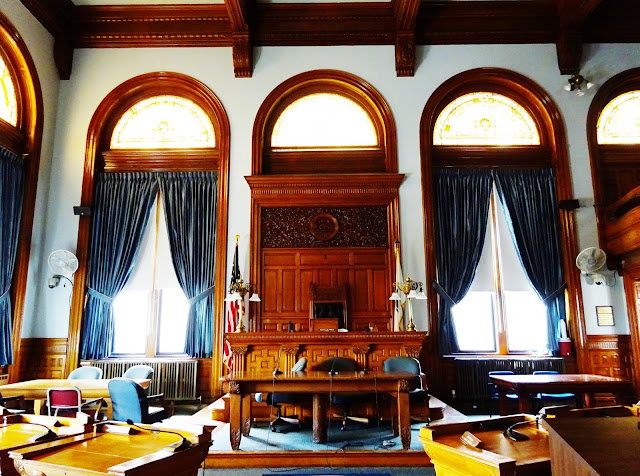 The city council room. The seal is behind the back chair, just below the middle window. (Sorry I couldn't get a clearer photo of it, I'll try again.) The City Hall was built in 1893, and I'm assuming this room was too, including the handcarved seal. 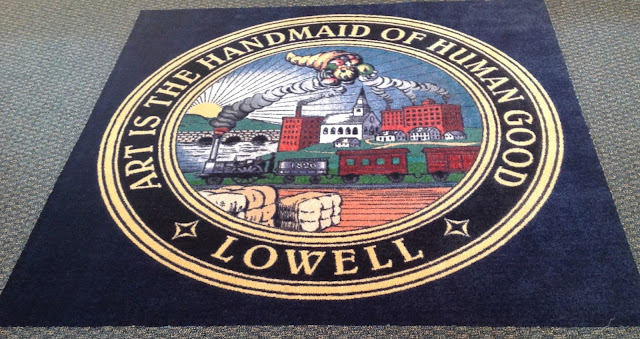 Seal on the rug and on the door of City Hall. 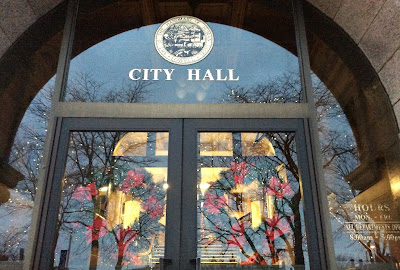 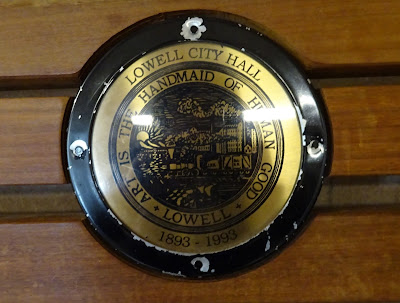 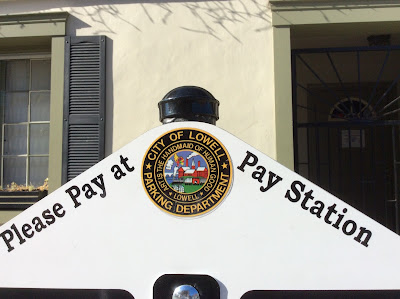 All pay stations have a picture of the seal. 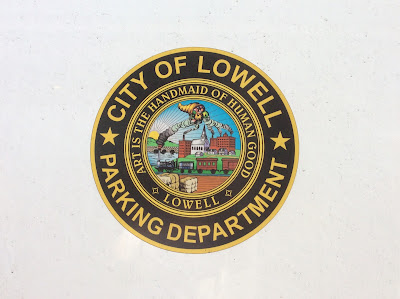 The above was on the side of an official city parking van. 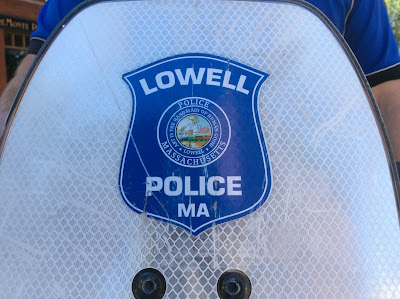 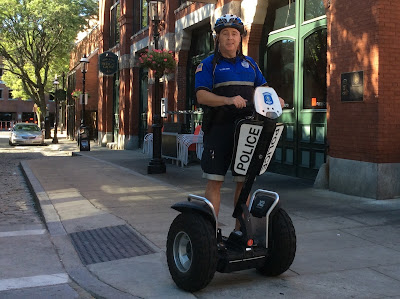 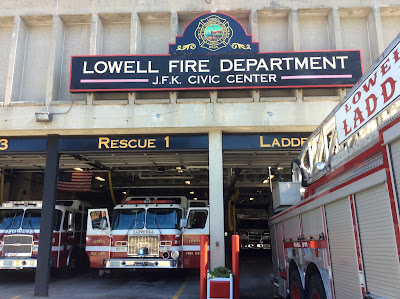 Seal above the sign for the Lowell Fire Department, and the one below was from a ladder fire engine. 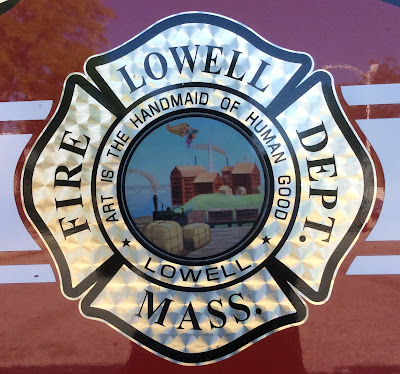 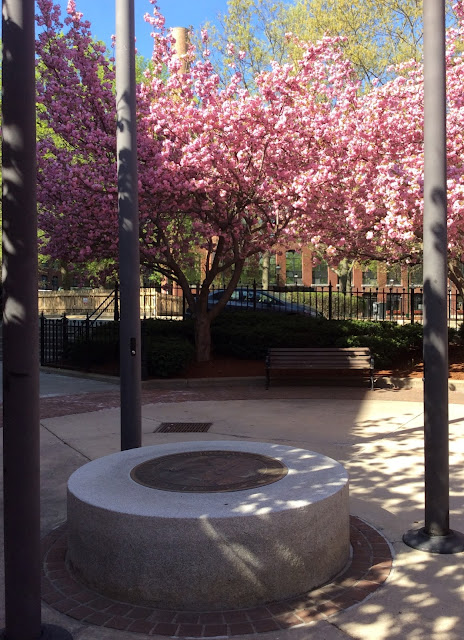 This seal is located next to the parking garage on Market Street, and has a lovely sitting area, especially in the spring. 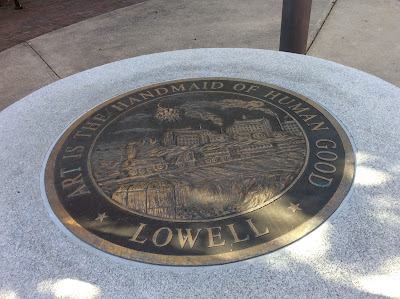 Lowell has a city flag, with the seal, shown below with the American and state flags. 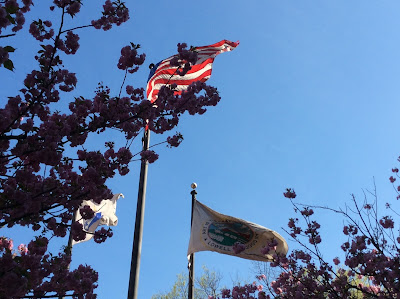 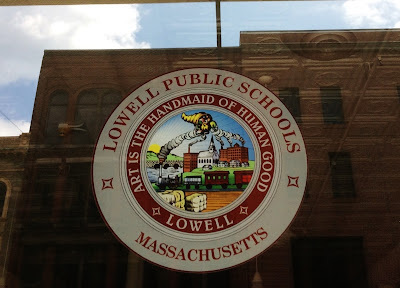 Seal on stone marker before entering the Parks and Recreation dept. headquarters, shown below. 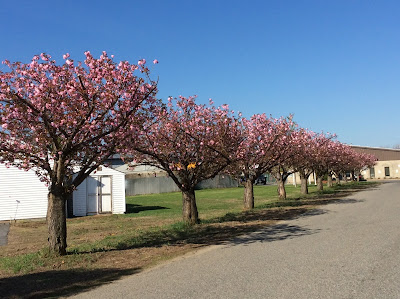 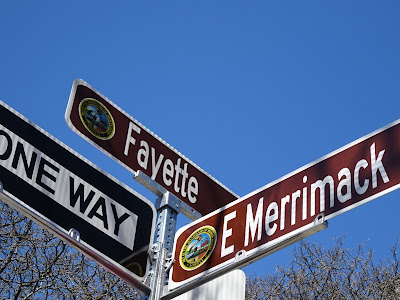 Seal is on some of our street signs. 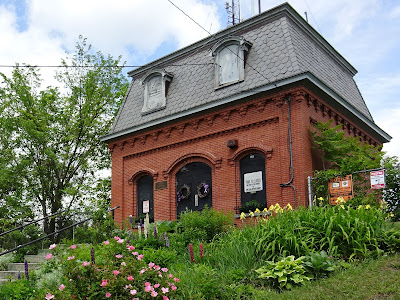 Seal on the notice located at the reservoir, shown below. 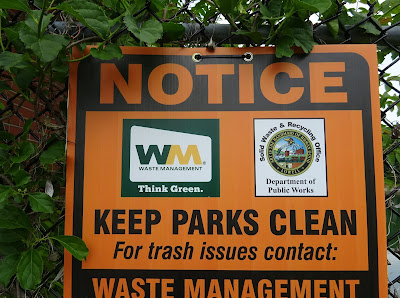 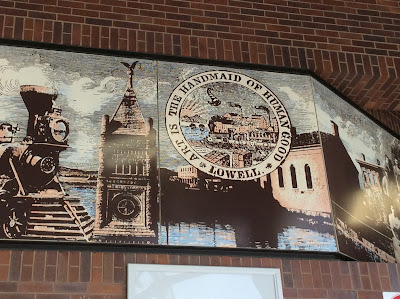 Even on a mural about 10' high, located in the Gallagher Terminal, there is the seal. This was among the first I ever saw, and at that point, I decided to see if there were others. 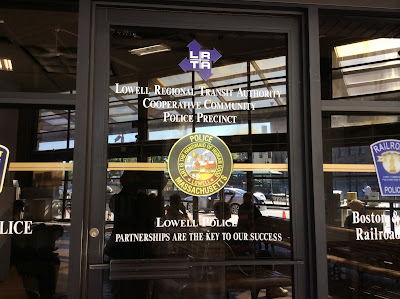 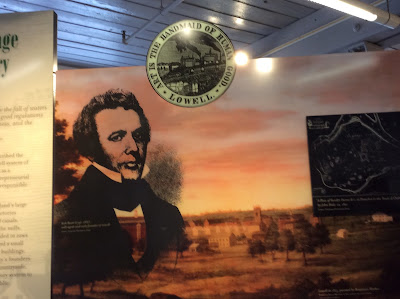 The seal is shown on several of the information displays in the National Historical Park visitors center. 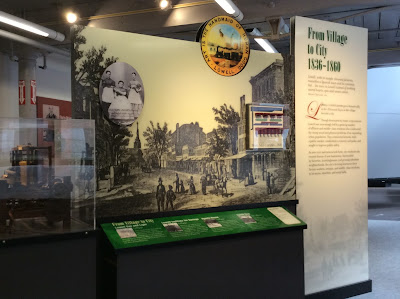 I never knew the history of the seal or the actual meaning. Those questions of mine are answered on the web page for the City of Lowell. Part is shared below.

Symbolism of the design
Centered on the Seal is a mill from whose chimneys are rising black clouds of smoke into a “horn of plenty”, intended to signify that Lowell’s mills are the foundation upon which her prosperity rests.  At the bottom is a train and bales of cotton, signifying the cotton trade which led the City to become known as the “Spindle City.” At the left is the Merrimack River across which a bridge has been built; this is the Old Pawtucket Toll Bridge built in 1792. The Seal bears the inscription “Art is the Handmaid of Human Good”, which means that “Skill walks hand in hand with the good of the people.” The actual origin of the motto inscribed is unknown.
Labels: Location: Lowell Massachusetts, Lowell Series, Seal
Email ThisBlogThis!Share to TwitterShare to FacebookShare to Pinterest