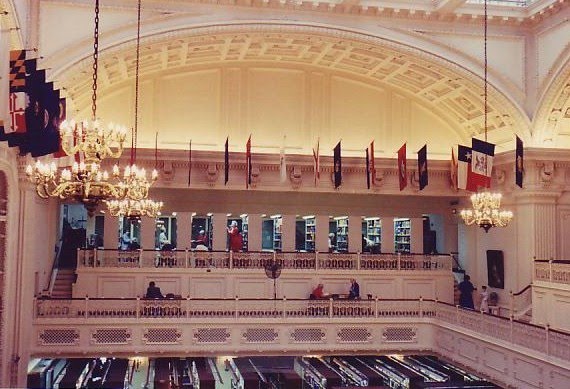 One of the first things a new employee would get, after filling out paperwork for the Human Resources office, was a tour of the building. For me, being in in that department, it meant I had to meet just about everybody. First visiting the basement with offices, including a printing department, the first and second floors, and a third, with a few offices, some of which you got to by going along the top level of the library. In addition to the people I met, learning how to get from one area to the next, and seeing private rooms, such as the banquet room, I saw all the period rooms and the Museum (many were open to the public and tours given by docents). Then there is the library (see picture and link below), while absolutely lovely to look at, I wasn't yet into genealogy. The entire time I worked there, only one other employee (not in the genealogy department) got addicted to genealogy like me. Bonnie began a few months after me, and since I reviewed her application, and was determined to get somebody in the organization the same age as me, I did. We are 10 days apart in age.


The Executive board came to the DAR about three or more times a year, and I got to know them all, some more than others. They usually came into the office when there was a problem with an employee. They all had their strong personalities, but I liked all these dedicated volunteers. Even to this year, I still receive a Christmas card from one of them, now living in Maine.


I was very lucky with my job because there was a lot of flexibility in my duties. Other than meeting certain deadlines such as greeting new employees, testing them (esp. the clerical), making sure all the payroll information was correct, and typing up discharge or warning papers, I could fly downstairs in a second to check out something in the Library. There have been a few people stating how nice the job sounded, well it was and could be yours too, as I saw the job posted at their site the other day. I hope you get it.


I love the "highly organized and detail-oriented" part.


And, for those of you who want to work as a genealogist, there is a new posting for that position as well at the above site.


Current DAR members might be interested in learning that I worked one entire summer for the First Vice President General (VPG), via phone and fax (she lived in the south) working on the DAR Handbook, something that was revised for every administration. I was the only one in my office with a computer, there were very few computers in the building at that time. Anyway, I was moved into a private room to work on the handbook. Not too smart do you think? Talk about doing research. But there was a lot of downtime, the VPG (while on the phone) would say something like she "needed some ice tea" and I would then say, "I'm going to the ladies room" always by way of the library, so we set the phones down and did our own thing. When she became the President, she had me type her acceptance speech the morning she gave it at the Convention. I was put in a separate room, so as not to be disturbed, talk about pressure.


While I was there, the Library purchased new chairs, and that meant a lot of old ones to get rid of, I do not know how old, but heavier than heck. Ask and I shall receive, now an original DAR chair is at my desk.


Christmas is next month, and while at the DAR, it was indeed a very nice place to work, esp. in December. Out one door, you would see the National Christmas tree, near the White House, the one that the president lights. In the late afternoon of the event, you could hear the guest singers practicing. Out the opposite side door, you would see the tall Washington Monument. Can't beat that. 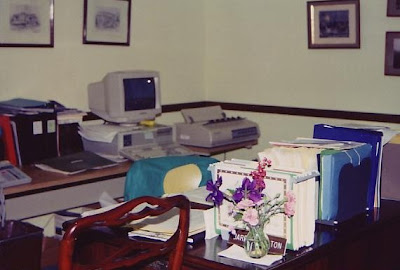