Each Example is Different, and None Were Done on Computers 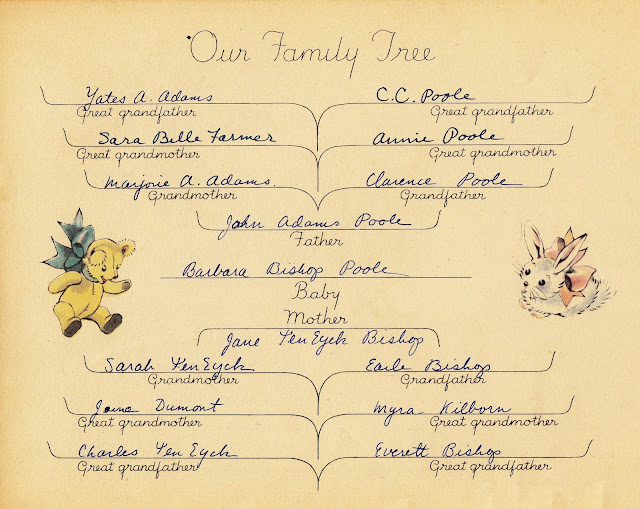 For many of us, we received a baby book with the new family tree filled out by a parent. This one of mine was filled out in full with all names, but unfortunately there are two small errors, and no dates nor locations. I received this book when I got married, I didn't think about these people until I began working at the DAR in Washington and decided to join as a member. Using this was my first source, until I discovered that my mother and great-grandmother had been members of the DAR.

I will show five examples of genealogy charts, all are quite different, and you might have the same luck if you just spread the news to your family members that you are big into genealogy, and ask if they have charts. Also, it would be a smart move to inquire at libraries where your family or ancestor lived as well as call, write or go online to see what the area Colleges, Historical Societies or any Repository has. Another suggestion is to ask other genealogists, especially if you belong to groups on facebook.

Since my old baby tree, I've been given several very detailed charts (typed and hand written) by family members and a stranger. In addition, I located a typed manuscript of over 200 pages. It appears that several of my ancestors were into genealogy. When I received these, I pretty much copied the data into my software. None of the charts had sources, but the manuscript did. The information came from an architect, a doctor, an archivist, a now Certified Genealogist and a lawyer, so I was very lucky...but remember they didn't source. I had lots of work to do because of that.

As you'll see, each example is different, and none were done on computers. I'll show them in the order that I received and include a brief description.

1. Several months after working at the DAR, a staff genealogist who was helping me with my line, surprised me with a nine-generation lineage chart, and more information as a gift. I wrote about this in a blog, seen HERE. I was in shock. You probably can't see it, but I didn't even know my grandfather's marriage or death date. 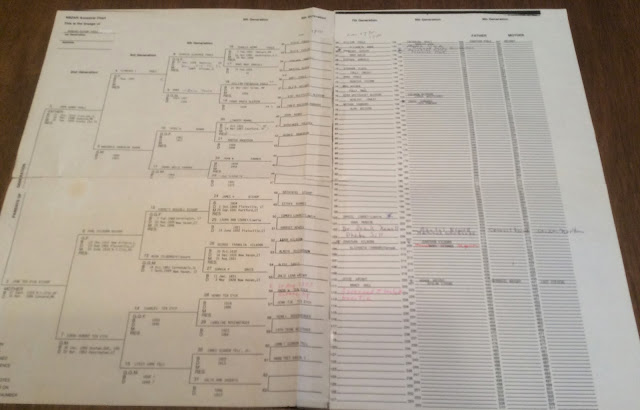 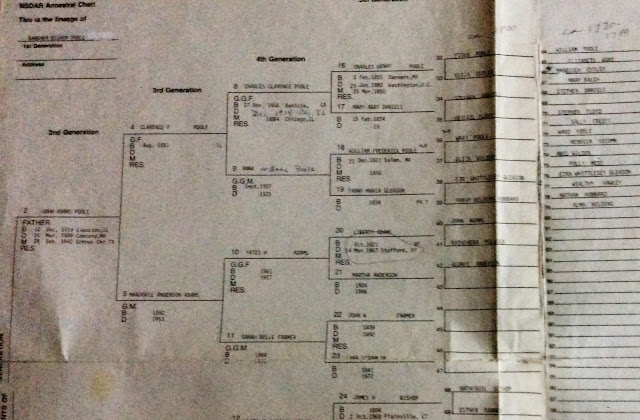 2. Two years later, I received a rolled up sheet, measuring 30" x 43" from my uncle, containing our genealogy. It was based on my grandfather's information done in 1957. This was a total surprise. There was a notation that he (uncle) updated a few things (new births, deaths and marriages). What I liked were the 13 stars indicating military service. However, as shown below, it was very hard to follow the lines, and there were some errors. 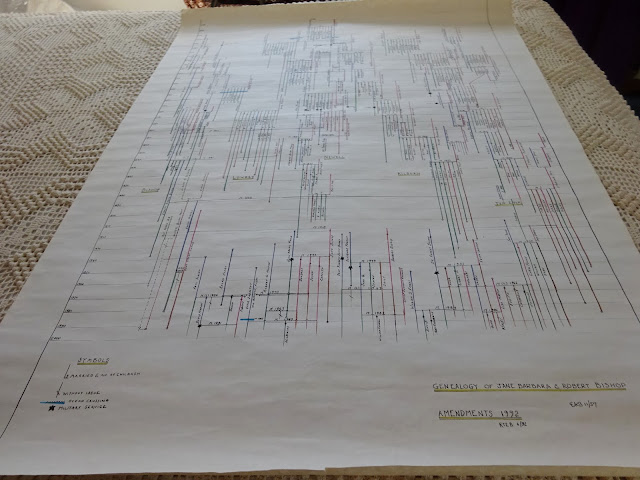 Full chart spread across the bed. 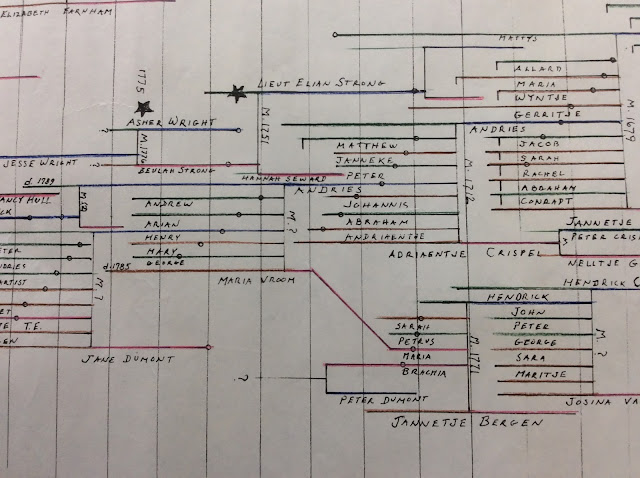 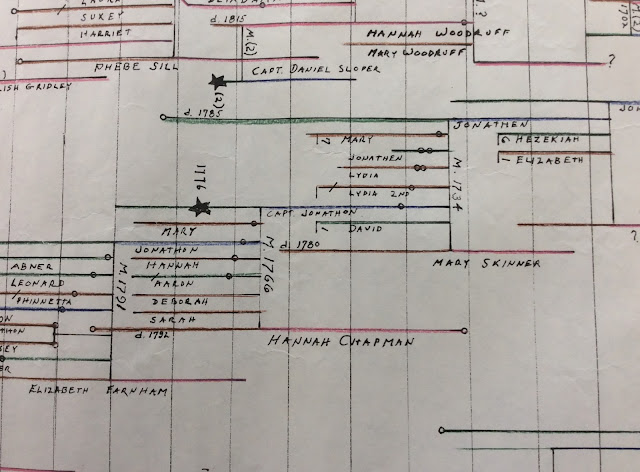 3. Ten years after I began my research, I went to Canada to get copies of the records my archivist cousin donated to a Historical Society. Below are a few examples. The first is a partial descendant report beginning with my fifth great-grandfather. The second report is the first page of six showing the family tree. 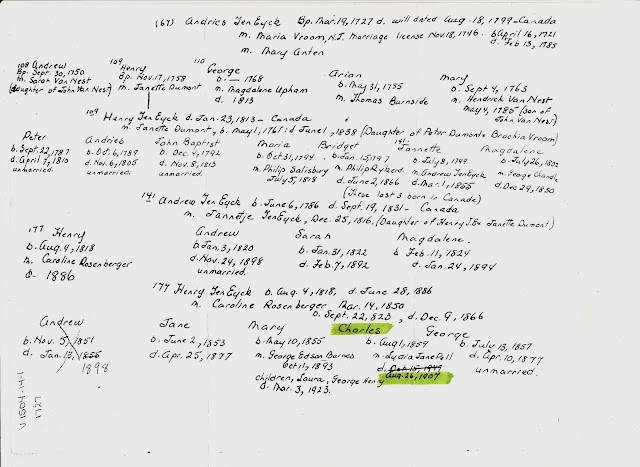 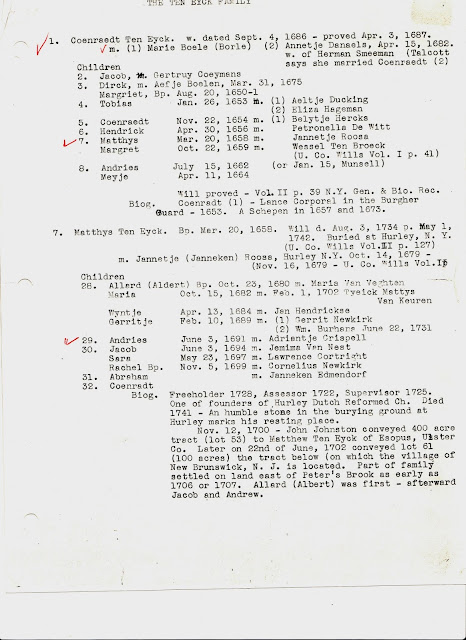 4. A year later, I received a huge package of information from a distant cousin, I believe he was ending his research, but I don't believe he actually did this work. Below are three very large sheets, (the top, middle and bottom, when put together would make an enormous page), showing the descendants of Hendrick Schrambling. A descendant, Henry Scrambling was my Revolutionary War Patriot, and I was obsessed with this line, even before I received this gift. The family arrived in New York ca. 1710 and I had an easy time tracing the lines until the later years when the family changed their spelling to Scramlin and other variations, so these sheets helped immensely. 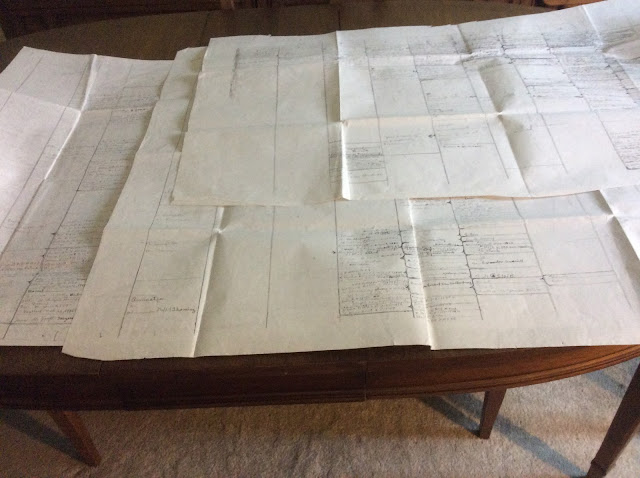 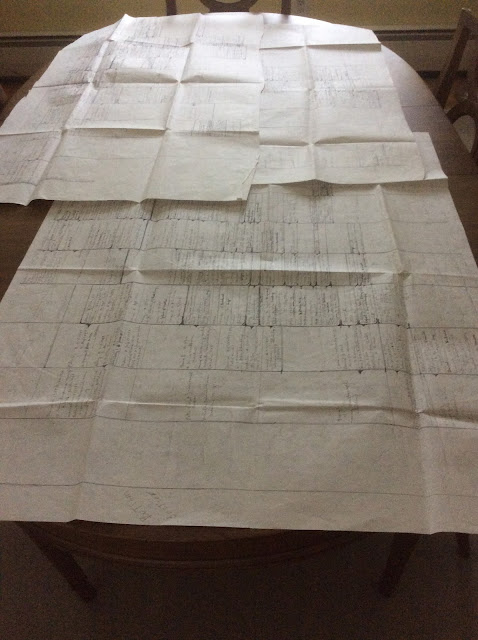 5. The pages below are from a manuscript my great-great grandfather wrote. It is located at the New England Historic Genealogical Society's library. By the time I discovered this, most my Poole line had been completed by me, because many resources and sources are plentiful in Massachusetts. I still have not read all the pages and I know there are things I'll need to add, after I check for sources. My post about my discovery is shown HERE and the first 25 pages shown HERE. I purposely left the pages below because of the "tabular" chart, parts of a will and transcript from a cemetery stone, so they can be read. 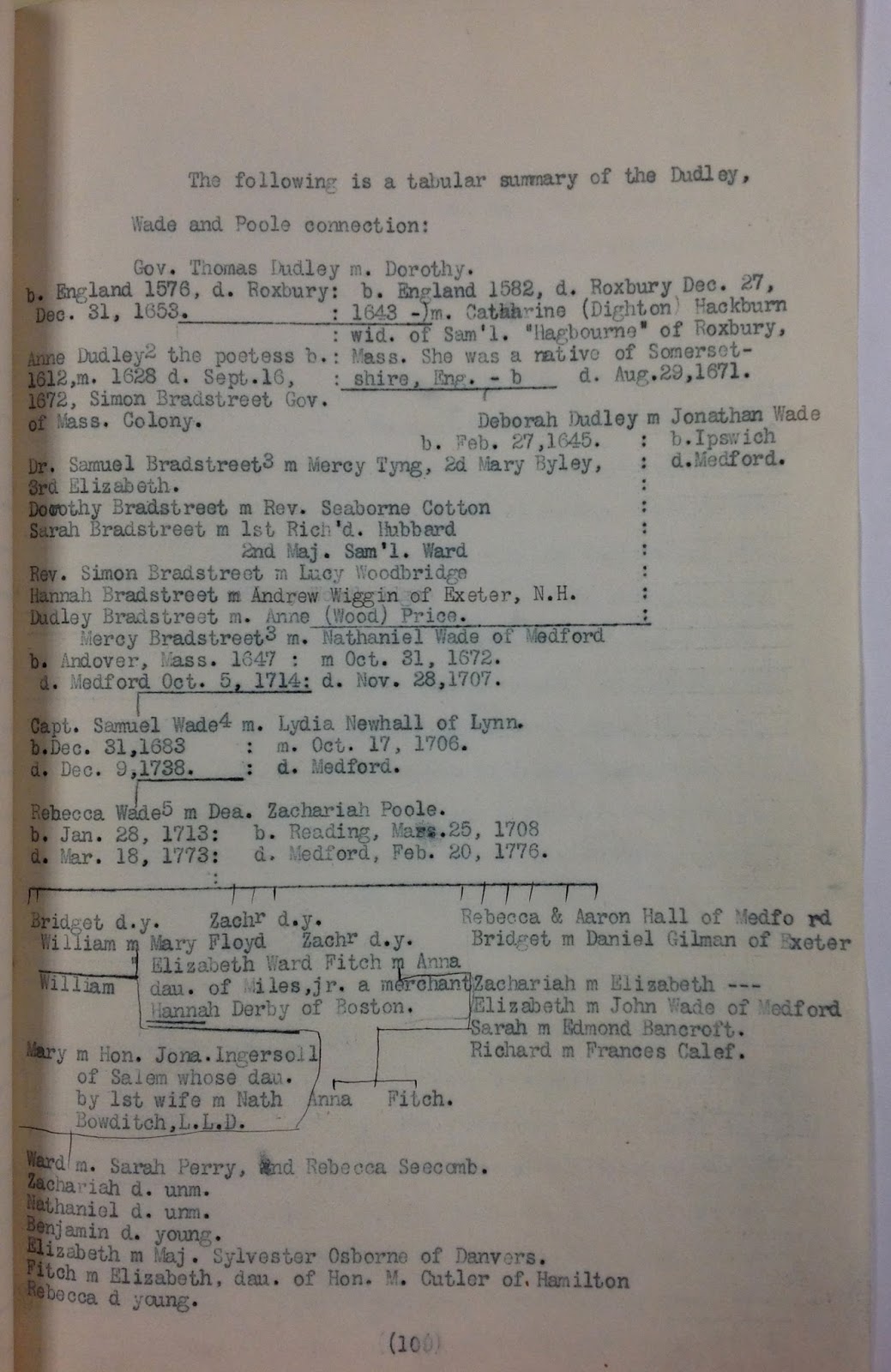 manuscript is over 200 pages, and includes transcribed wills and cemetery tombstones. 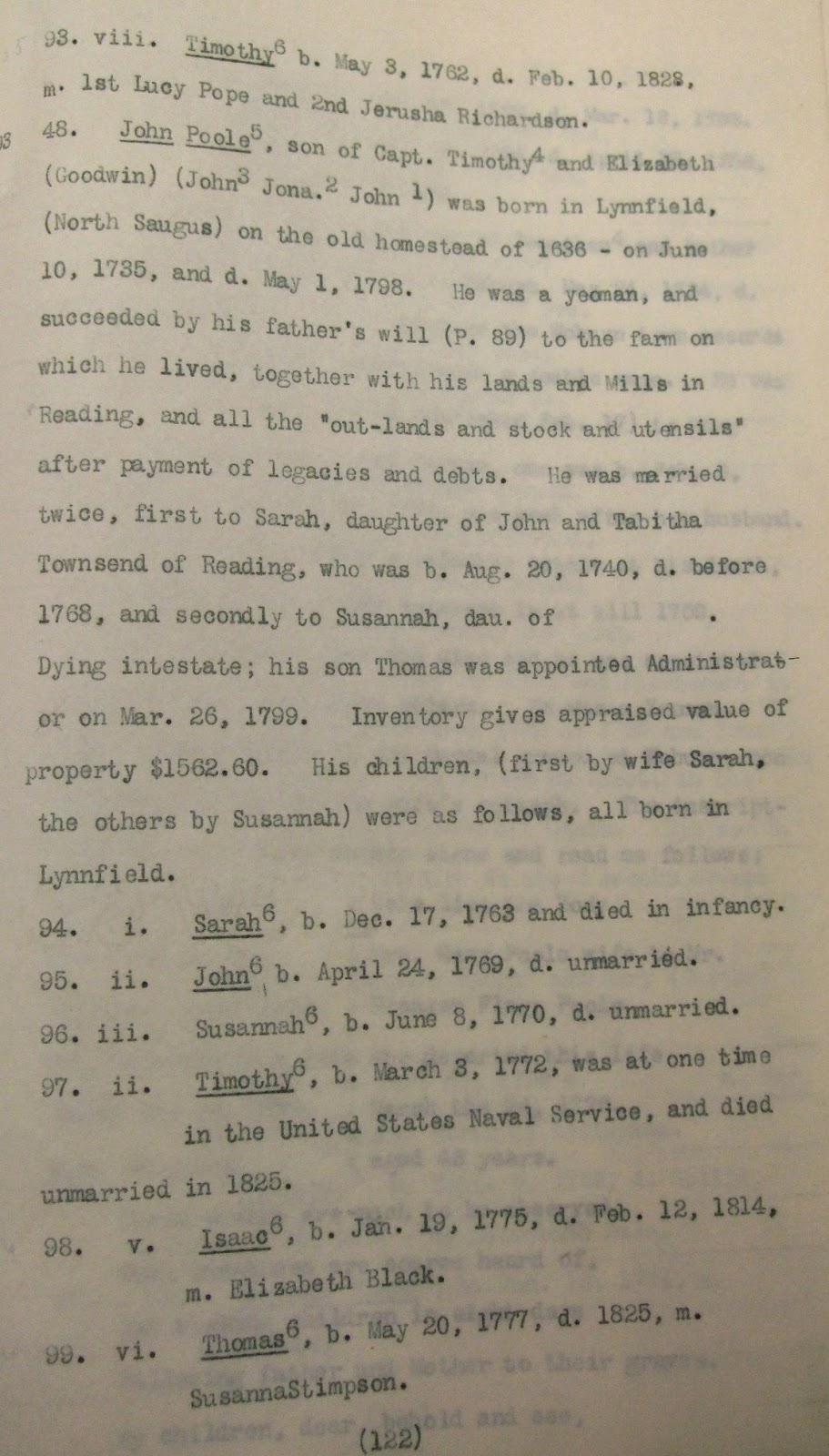 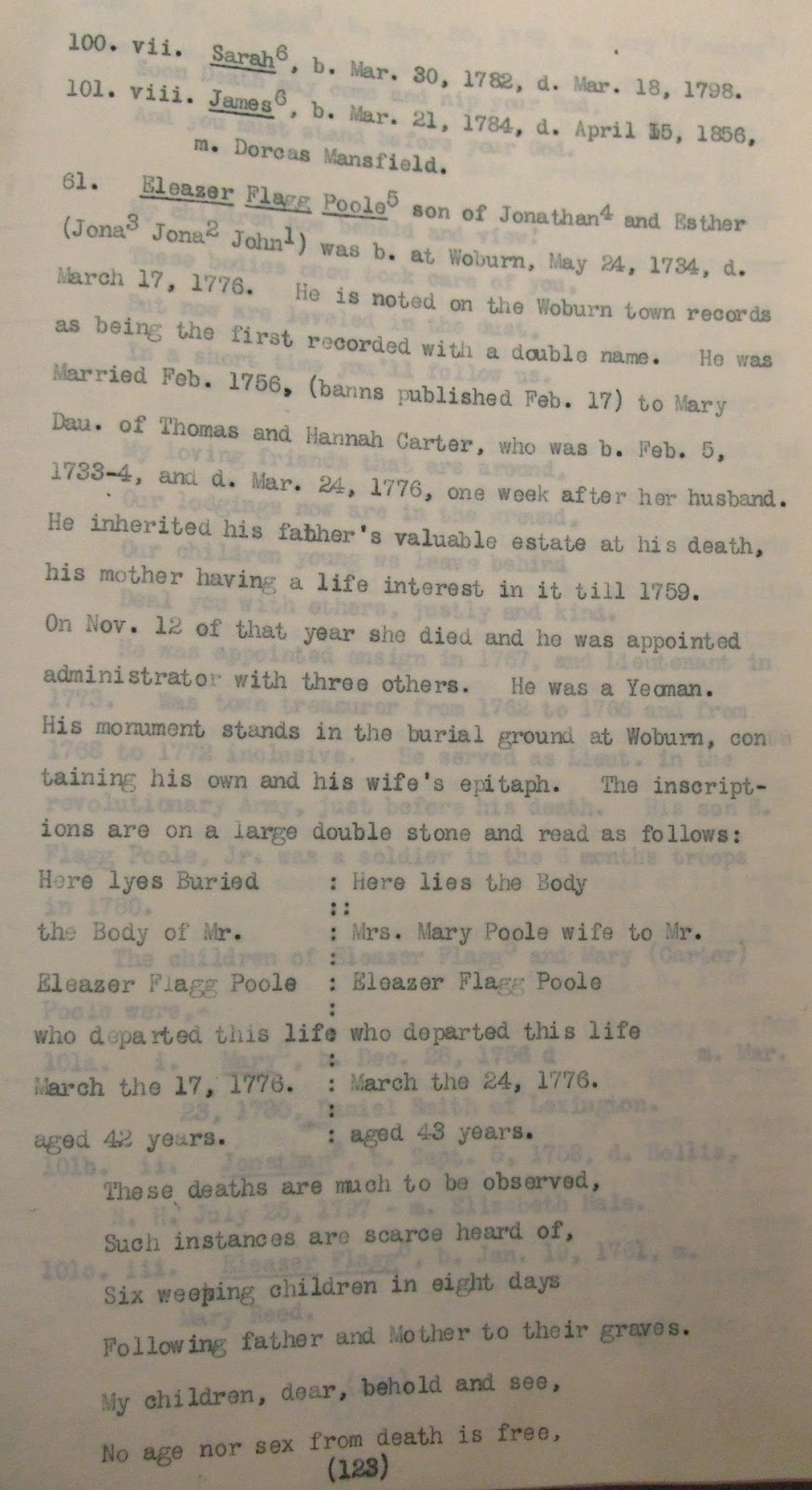