Saturday Night Genealogy Fun -- How would I spend $20,000 from Ancestry?

For Saturday, February 27, 2010, Randy Seaver's Saturday Night Genealogy Fun  pertains to the contest Ancestry.com is offering everybody to participate in.

Randy states, "Your mission, should you decide to accept it, is to:

1) If you won grand prize in the Ancestry.com Ultimate Family History Journey Sweepstakes of $20,000 for genealogy travel to places of your choice, where would you go?
2) Tell us of your dream genealogy trip using the prize money in a blog post of your own, in a comment to this post, or in a comment on Facebook."

My answer was pretty much formed the minute I entered the contest.

While the desire to return to England is somewhere in the back of my mind, I realistically think I would travel around the United States, and Quebec, Canada instead. The furthest I would go will be determined by any new information obtained through the consults. But, since my family has been in the United States before 1800, I would think it would be one of the states.

There is only one library, the Newberry Library in Chicago I really want to visit. Three generations of Pooles were from Evanston, Illinois, and I would love to see where my grandparents were buried. From Chicago, I would go via train to Salt Lake City for five days of research.

A trip to Washington, DC to revisit the roots of my great-grandparents, and do research at my old stomping grounds, the DAR library.


A 4 or 5 day trip around Connecticut, and a completely different trip for Massachusetts, both times staying at bed and breakfast inns and visiting cemeteries, the area, homesteads and seeing the land. In addition, a return mini trip to Quebec, Canada, with stops in Vermont and New Hampshire, visiting areas of my ancestors. During the entire trips, I would be praying for great weather. It is pretty easy to get carried away here, but I think I would also like to go to New Jersey and New York to trace my Ten Eyck line from New Amsterdam, to New Jersey to Albany, NY. That would also require several days at libraries in Albany and Cooperstown.

Depending on the restrictions for spending the 20,000, I would like to purchase a new computer during the trip and a camera as well. If Ancestry.com allows it, I would like to attend one or two genealogy conferences within the year. Not knowing how much time I have to spend the money, it is hard to say when or where I would go, and could my husband attend as well, since this is his hobby too.

A few donations will be made to my favorite Historical or Genealogical Societies, I might even become a lifetime member.

So, let’s see, budget wise, it would cost about:

Well, if I am over my budget, I would do them all, and pay the difference out-of-pocket. And, share everything with the blogging community. No, maybe not, I wouldn’t want anybody to be jealous.
Labels: Saturday Night Genealogy Fun
Email ThisBlogThis!Share to TwitterShare to FacebookShare to Pinterest

Farnham and the Connecticut Barbour Collection 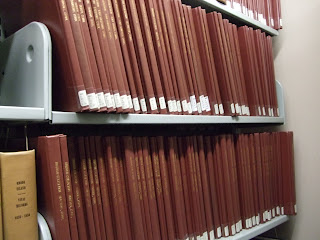 In an attempt to explain, I will show copies of the two sources for the above individual. When I first began researching this line, I used the Barbour Collection at the New England Historic Genealogical Society's Library (NEHGS). This collection consists of about 110 maroon bound books, one for a town or city in Connecticut, but not all towns are in this series (photos taken at NEHGS).

Within these books, the surnames are in alphabetical order, then the names, indicating whether it is a birth, marriage or death, and followed by the volume and page number.  Unfortunately, when I first began sourcing this name and using the book for Killingworth, Connecticut, I just used the page number (Pg. 31) from the book as the source. The page I used is shown below, and Joannah's name has an arrow by it.

So imagine my dismay when a new series of the Barbour Collection was published, about eight years ago, not all at once, but one or two books at a time.  These blue books are set up the same way as the original maroon ones, but may contain more than one town.  I think there are 52 books in all.
They are much smaller and easier to read. Surnames are in bold and all-capped, everything is cleaner, no crossed out typo errors. However happy I was to see these new books, imagine my surprise when I realized my past sourced entries weren't agreeing with the new books. Not only did I now have a huge number of Killingworth sources incorrect, but I probably had thousands for the entire state! My new JOANNAH FARNHAM'S death is now on page 34 not 31. And, there was a correction to her death date, no longer was it August 22, 1689, it was now August 11. The death date was easy to change, but not for all the incorrect page numbers.
What did I do about all the thousands of incorrect page numbers?  I did what I should have done in the very beginning.  Instead of the page number, I manually went back and put in the volume and page number for that record. This is another hard lesson I learned, don't assume that the page number is always going to be the same for records.  Another publication may come along with pretty much identical bits of information.  So please don't be like me, but think ahead, and try to find out where the original information was obtained from and  try to use that.

In closing, I was going to discuss the background of the Barbour Collection, but already this is too long. However, here is a photo of the original record; I obtained from the town hall in Killingworth. You can clearly see that Joanna Farnham died on 11th Day of August 1689 (the tape is under her name).