Happy Thanksgiving to You and Your Family 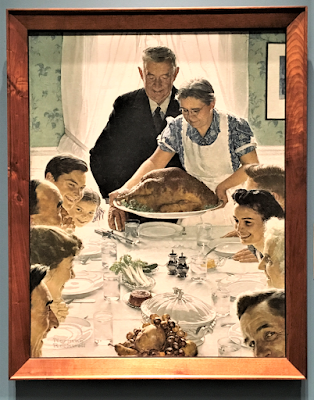 Freedom from Want by Norman Rockwell

In December 2017, I toured the Norman Rockwell Museum in Stockbridge, Massachusetts and saw this painting. It was quite a thrill because I've always seen it in print, but never the original. At that time, I knew I would use this painting for my Thanksgiving greeting. My family never had a dinner like this, but it's fun in imagine what it would be like. No matter what you eat or who you share the day with, just be thankful for what you have.

From Wikipedia: "Freedom from Want, also known as The Thanksgiving Picture or I'll Be Home for Christmas, is the third of the Four Freedoms series of four oil paintings by American artist Norman Rockwell. The works were inspired by United States President Franklin D. Roosevelt's 1941 State of the Union Address, known as Four Freedoms.

The painting was created in November 1942 and published in the March 6, 1943 issue of The Saturday Evening Post. All of the people in the picture were friends and family of Rockwell in Arlington, Vermont, who were photographed individually and painted into the scene. The work depicts a group of people gathered around a dinner table for a holiday meal. Having been partially created on Thanksgiving Day to depict the celebration, it has become an iconic representation for Americans of the Thanksgiving holiday and family holiday gatherings in general. The Post published Freedom from Want with a corresponding essay by Carlos Bulosan as part of the Four Freedoms series. Despite many who endured sociopolitical hardships abroad, Bulosan's essay spoke on behalf of those enduring the socioeconomic hardships domestically, and it thrust him into prominence."