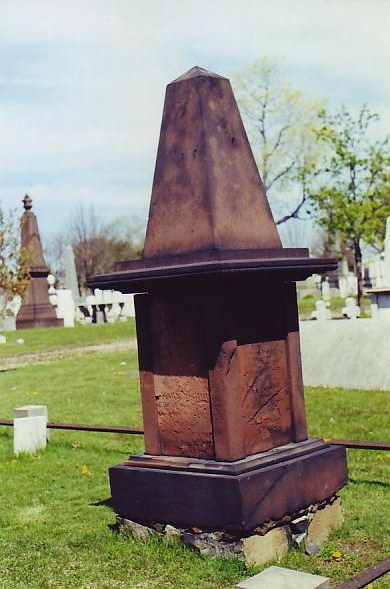 A few weeks after posting the above picture, taken in 1999, I noticed that Rob Johnson had a nice marker in front of the above stone. He gave me permission to post them to this blog. See FindAGrave for all the photos.

James was not listed on my Cemetery List because I wasn't organized enough or I just forgot to list him.  That is what happens when your photos are in many files and boxes.

From Wikipedia---
"Bishop was very involved in the early governments of New Haven and Connecticut colonies, serving at various times as deputy to the legislature, colonial secretary, clerk of court, assistant judge, and sergeant in the New Haven militia. Bishop served on the Committee on Indians in 1668 and later served on the wartime council in 1673-1676 that dealt with King Philip's War. Finally, Bishop was lieutenant governor of Connecticut in 1681-83 and deputy governor 1683-1691."
Labels: FindAGrave, Surname: Bishop, Tombstone Tuesday
Email ThisBlogThis!Share to TwitterShare to FacebookShare to Pinterest