Visiting the Monuments and Old North Bridge 57 Years Ago! 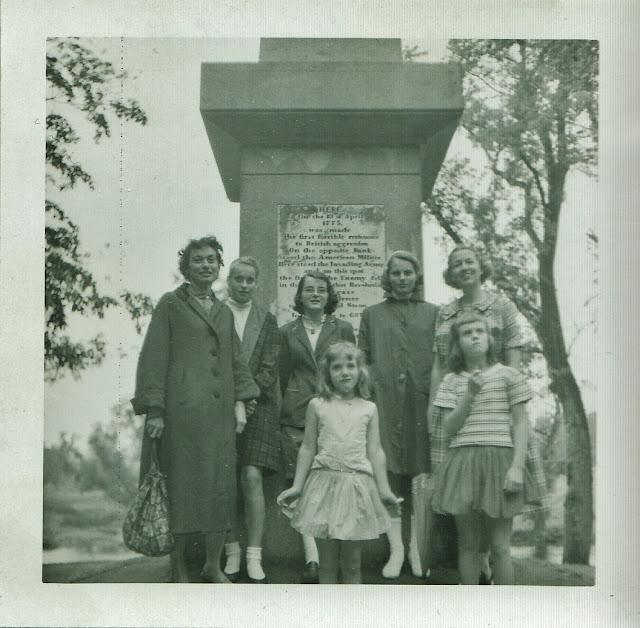 My mother's college friend, Mrs. Williams and her two daughters came to visit us in Lexington in 1958. We had already lived in that town for about four years, so I am quite certain the 1958 visit wasn't my first time there. One of the daughters, Dee Williams Malan and I were about the same age and when I lived in Alexandria, VA, she did too. We saw each other often, and once she came to Lowell,  MA for a quick visit. I am in the middle back, mother on the right and my two sisters are in front. 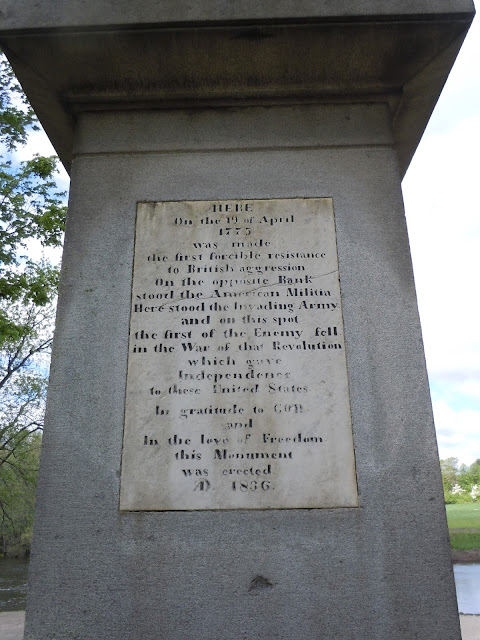 HERE
On the 19 of April
1775
was made
the first forcible resistance
to British aggression
On the opposite Bank
stood the American Militia
HERE stood the Invading Army
and on this spot
the first of the Enemy fell
in the War of that Revolution
which gave
Independence
to these United States
In gratitude to GOD
and
In the love and Freedom
this Monument
was erected AD 1836. 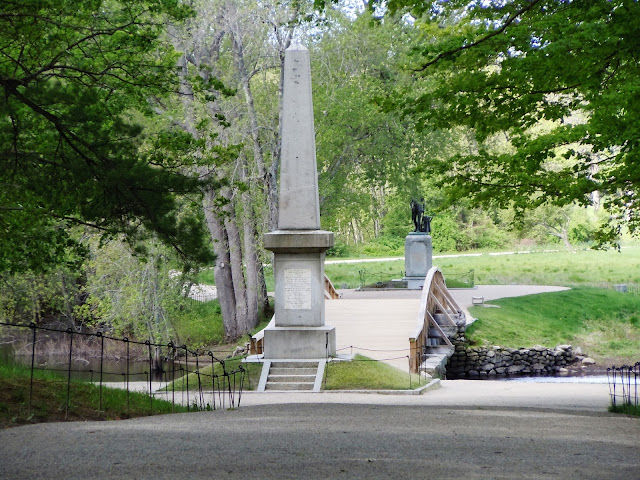 I never knew the name of this monument, so Wikipedia came to the rescue. It appears it's just called the 1836 Monument. While on that site, I discovered some other very interesting bits of information, shared below:

The original North Bridge was dismantled in 1793 by the town of Concord because its use as a bridge had become impractical; a new bridge was erected a few hundred yards away. The bridge was rebuilt multiple times in 1875, 1889, and 1909. The current replica was built in 1956 and was based on drawings of the bridge built in the 1760s. The bridge was restored in 2005.

In 1836, when there was no bridge at the site, the residents of Concord erected a memorial obelisk on the east side of the river, the side closest to the town center. Inscribed on the eastern (approach) side of the monument is: "HERE On the 19 of April, 1775, was made the first forcible resistance to British aggression[.] On the opposite Bank stood the American Militia[.] Here stood the Invading Army and on this spot the first of the Enemy fell in the War of that Revolution which gave Independence to these United States[.] In gratitude to GOD and In the love of Freedom this Monument was erected AD. 1836."
On Independence Day, July 4, 1837, the memorial was dedicated, an event for which Ralph Waldo Emerson wrote his "Concord Hymn". The first, and best known, of the four stanzas of this poem is:

By the rude bridge that arched the flood,
Their flag to April's breeze unfurled,
Here once the embattled farmers stood
And fired the shot heard round the world.

The first stanza of "Concord Hymn" is inscribed at the base of the statue Minute Man by Daniel Chester French. The statue, which stands on a 7-foot-tall granite pedestal, was cast in the Ames Foundry in Chicopee, Massachusetts and was made from seven American Civil Warcannons donated for the project by Congress. The statue, and the 1875 bridge, were dedicated on April 19, 1875 at a centennial recognition of the original battle of April 19, 1775." 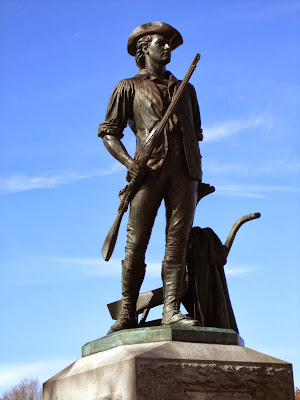 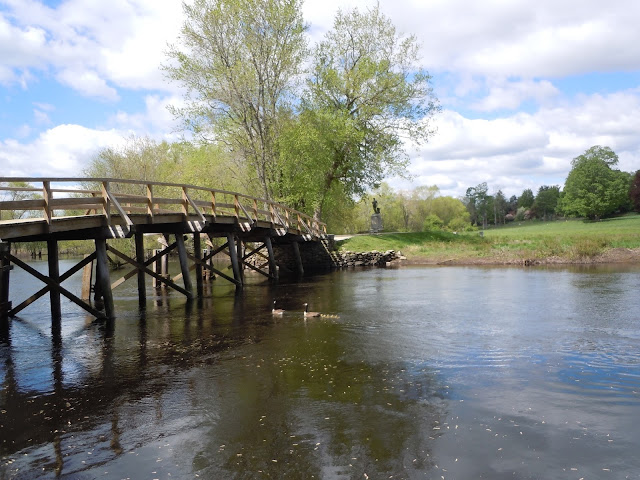 Past photo posts about the North Bridge Visitor Center, park and bridge in Concord, seen HERE and HERE. In reviewing the photos, I don't think I need to take any more photos!