Amanuensis -- An Ancestor Stolen by Pirates

I read my first Amanuensis in John Newmark’s genealogy blog TransylvanianDutch.  Of course, I had never heard that term before.  However, my blog today is an example of an Amanuensis.  What is an Amanuesis?  "It is a person employed to write what another dictates or to copy what has been written by another." I  am copying a page from the Missisquoi Historical Society Reports, Vol. 17, 1982, "The Story of Catherine MacDonald" by M.J. Ellis. Pp. 113-114. The author, Margaret Ellis, was my first cousin, once removed.  (Direct ancestors are in green.)


"The Story of Catherine MacDonald

These sugar tongs were presented to Catherine MacDonald at her marriage about the year 1760 and descended through her daughter Mary Currie, and her granddaughter Catherine Westover to her great granddaughter Martha Rosenberger, who destined them for her niece Mary Rosenberger, in charge for her daughter of the original owner and in the event of the death of Mabel without heirs, they are to go to the eldest child of Charles TenEyck, grandson of Catherine Westover.


The story of Catherine MacDonald was briefly mentioned on page 33 in the First Historical Report (1908).  The following story came from two sources: from Mrs. Edwin Smith (written in 1888) and from Mrs. Edward Stote, written in 1912.

"Somewhere about the year 1745, a little girl, attended by a nurse, about four or five years old, was playing on a beach somewhere along the coast of Scotland.  A pirate ship nearby saw the little girl and thinking possible of ransom, stole her.  Maybe by poor communication, or by a storm, that plan was abandoned and the ship crossed the ocean and the little girl was sold in New York.  Fortunately, she came into the hands of a Madam Livingstone who treated her in every respect, except one, as her own daughter.  She wisely called her CATHERINE MACDONALD, the name which was marked on the child's clothing, which was of finest linen.

She no doubt was hoping that sometime it might be a clue that would lead to finding her family.  Through fright or perhaps from long weeks at sea the child could remember nothing about her home or family, only that she was playing on the beach with her nurse.

The child grew to womanhood and when about twenty-two years of age was married to a Mr. CURRIE of Alburg, VT, an American of Scottish descent.  Among the gifts from Madam Livingstone to her adopted daughter were these sugar tongs.

Four children were born to them, FRANCIS, ROBERT, CATHERINE and MARY.  Mary married ASA WESTOVER, also of Alburg, VT.  He was of Welsh descent.  Mrs. Westover (Mary Currie) died when 37 years old, leaving 3 daughters: CATHERINE, ELIZABETH, and MARGARET. After the death of their mother, the children went with their father to Sutton, Quebec, moving to Dunham a year or two later.

In 1880 Catherine was married to HENRY ROSENBERGER who was born on the Hudson in New York State but whose ancestors, of German descent, came from Wittenberg on the River Elbe. When there seems to have been a general movement from that part of the United States towards Missisquoi Bay, his parents were among the first to arrive.  Henry then being three years old. They settled on a farm in St. Armand West and raised a family of seven children.  The place is now known as Rosenberg, where two of their grandchilden, James and Hattie Rosenberger still reside (1912) the great-grandchildren of Catherine MacDonald.  Elizabeth, the second daughter of Mr. and Mrs. Westover, married a Mr. George Rykert of Dunham (they were the parents of Asa Rykert) whose father was John and grandfather Capt. Joseph Rykert.  Margaret, unmarried, lived with a brother of her father's second marriage, near the home of her childhood on the picturesque hills near Dunham and Frelighsburg.

Postscript:  To return to the sugar tongs and the first paragraph, Mary Catherine Smith did die without heirs and so the sugar tongs came to the eldest child of Charles TenEyck -- Caroline TenEyck Doherty -- and so to me, Margaret Doherty Ellis."


Photo of the silver tongs was shown in the article. 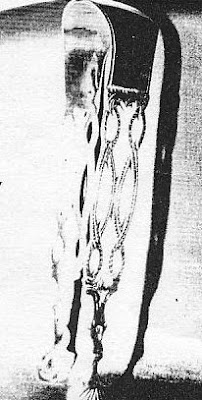