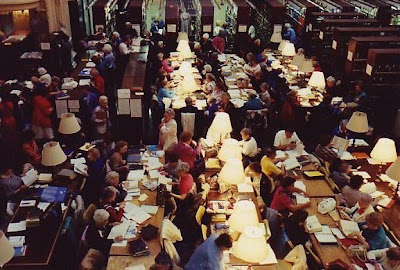 
This is part 3 of my article, this week, about working at the Daughters of the American Revolution (DAR) in Washington, DC.


A few of the staff genealogists asked if I was interested in genealogy. What? I had no idea what they were talking about. I had a little interest, and all I knew about my heritage was that I was 1/4 Dutch, and my grandmother was from Canada, so I thought, also part Canadian. My father was born in Illinois, his line was from somewhere and they just plopped in Evanston. I knew nothing else. Thank goodness, being a DAR member was not a requirement for being an employee. Although most employees were women, there were a few men working as well. There was a staff of about 25 in the Genealogy department, but not all were genealogists, nevertheless, you can see, it was a huge department. The Library was a large department as well. The 360-degree view of the Library is wonderful, and I'm posting the site again. http://www.dar.org/omni/virtualtours/hq/index.html


If you ever get to Washington, DC, I strongly recommend the building as a building to visit. For you genealogists (men or women), by all means, please go. The cost is something like $6 for the day, no cost for DAR members. For the children and wife, they can take a tour of the period rooms and see the Museum. All information is on their home page. One of the nicest things about the Library is that their books are listed in the card catalog,  http://www.dar.org/library/onlinlib.cfm so you can see ahead of time their holdings. A great way to prepare your research there.  In addition, there is a microfilm center, a place where I almost went blind and wore my arm out. Even to this day, I can't do more than three hours of microfilm at a time or I get dizzy.


The genealogy bug hit me about two weeks later, when I received a wonderful package from my mother, then living in Massachusetts. Among the items I received were a copy of her DAR application, birth records for her and me, information about her chapter in Connecticut, and other documents and papers. I had no idea about this part of her past! Within minutes, I rushed to a few people and told them what I found out. One employee, in particular, a now CG, took me under her wing. She explained that the DAR was trying to get as many new members on board because the following year was their huge 100-year celebration, the Centennial. From that moment forward, that is just about all I heard about until it happened. Of course, there was a lot of learning on how to do my research.  I did a huge amount of work, but I was really lucky because many on the staff helped me, but no matter what, I never paid attention to the whole thing about citations and working on the whole family, I did just my line, can you imagine? And even today, I am making corrections and trying to find sources to put where they should be. I might not have been really lucky, because I found so many lines really quickly, thus moved from family to family in a heartbeat, and could never keep them straight.


On my first day of research, I clearly remember. My genealogy friend knew my great grandparents were from New Haven, and immediately brought me up to the 3rd floor, where she pulled out a 1920 city directory...there he was listed. I was shocked. Then the same week, I found a great book on Durham, Connecticut, which had the births and marriages in chronological order of my mother's DAR patriot, I learned how to trace my line, staying up to 2 AM, and yes, I did sneak the book out, but the Librarian knew it. The next thing, within that first week, was, my friend went to the National Archives and Records Administration (NARA) in DC and got a copy of the 1920 Federal Census of my grandparents, listing my father as being one year old. I had no idea what a census looked like, and was pretty impressed.


In the following months, I took all my breaks, lunchtime, and many bathroom trips via the Library to research also went to the Library on the weekend. I think some of the Library staff must have wondered about seeing me all the time. And my bosses, well they must have known and wondered why I was doing so much xeroxing. At this time, I was working on the same line as my mother, but I discovered another Revolutionary War patriot and decided to use him, and his name was added into the book, DAR Patriot Index, a three-volume set of books, which lists the patriots that the DAR members have used. Because of my connections, all my paperwork went through the channels rather quickly. I decided to join the same chapter my mother belonged to in Connecticut. Those members were thrilled to have a new member and when some of them visited the DAR, I got to meet them. However, when I moved, I dropped my membership. If I remember correctly, the chapter was disbanding, as did the one where I now live. Unfortunately, that has happened to many chapters.


The 100th Anniversary Celebration was in October 1990, there were so many planned events. Some for all employees (like receptions) and some just for members. As I fit both categories, I attended a lot of things, and still managed to do my job. There was a lovely reception at the Capital Hilton Hotel, I believe on Sunday afternoon to kick off the week of festivities. The birthday dinner also at the Capital Hilton Hotel was a night I won't ever forget. Everybody was dressed to the nines, and very happy. Indeed, a nice experience. The photo below is of the President General cutting a cake in the Library. And as shown in the photo above, not a seat to be had that same day.  Everybody wanted cake and to do research. 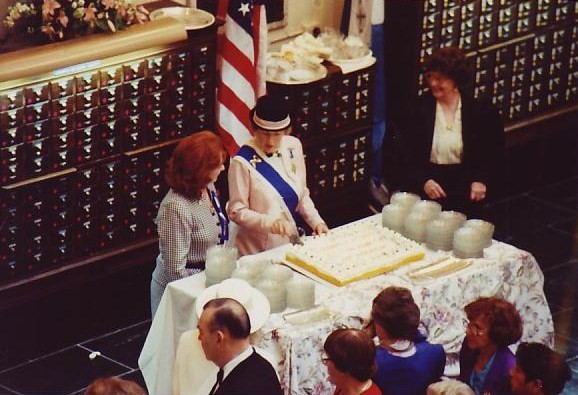 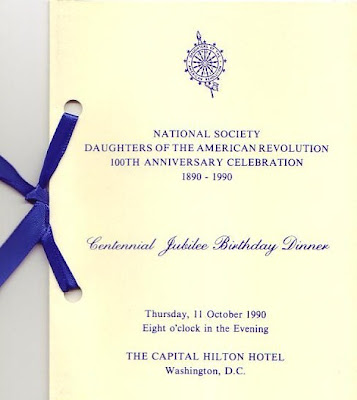 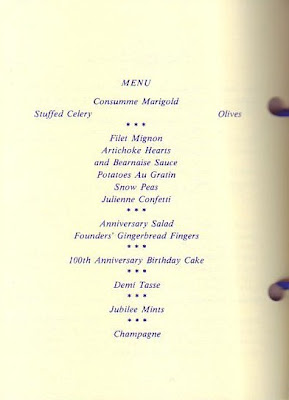